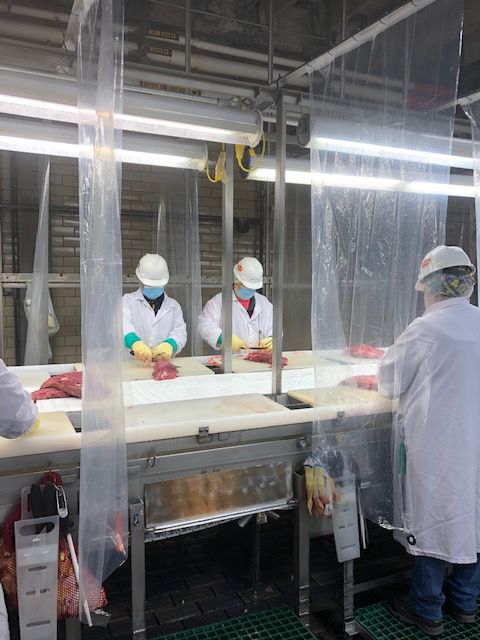 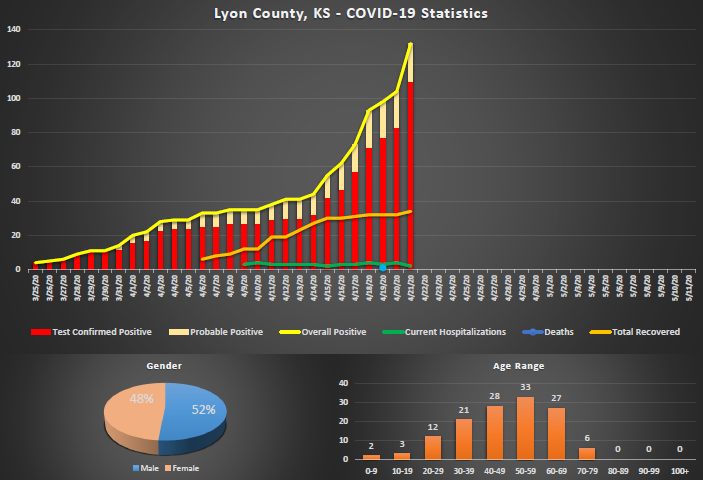 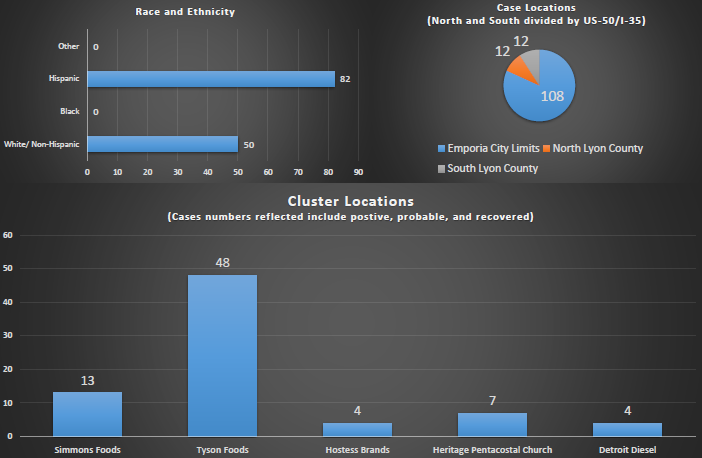 The spike comes after public health officials rolled out new rapid testing capabilities in partnership with Tyson Foods, which was identified as the largest cluster for infection within the county so far. There are now 48 confirmed cases of the novel coronavirus associated with local Tyson Foods employees.

“We’ve been checking worker temperatures as they arrive at the facility,” Tyson Communications Manager Liz Croston said. “We’re mandating and providing face coverings and have initiated additional cleaning. We’ve implemented social distancing measures, such as installing workstation dividers and providing more breakroom space. We relaxed our attendance policy in March to encourage workers to stay at home when they’re sick. We’ve also been educating team members on COVID-19, including the importance of following CDC guidelines away from work.

“When we learn an employee has experienced symptoms and tested positive, they remain on sick leave until they are released by health officials to return to work. We also affirmatively notify anyone who has been in close contact with the positive team member.”

Emporia’s plant is not the only facility identified as an outbreak cluster for the virus. Large outbreaks of the virus have also been largely associated with the meat packaging industry in Iowa, according to the Associated Press. The state currently completes 1,000 to 2,000 tests daily. More than 27,000 residents have been tested since the beginning of the pandemic, about 1 of every 113 residents. Studies have shown Iowa’s per capita rate in the bottom half of the states.

Tests have been limited to hospital patients, people with symptoms and underlying medical conditions who are over 60, those who live in large residential facilities, and health care and other essential workers. Despite the limits on who can get tested, Iowa’s confirmed cases have dramatically increased, partially due outbreaks at meatpacking plants that have infected hundreds of workers.

State data released Tuesday shows 482 more people have contracted COVID-19, the respiratory illness caused by the virus, and four more have died. The tally of new cases was a one-day record, equaling roughly the number of cases in Iowa just three weeks ago. The influx boosted Iowa’s total to 3,649.

The hardest hit was Black Hawk County, which reported 107 new infections that local officials say are largely tied to a Tyson Foods pork plant. The county Board of Health approved a statement Tuesday urging the company and governor to temporarily close the plant, warning that its continued operation “will exacerbate — rapidly — the infection of its employees, their households, and the communities in which they reside.”

Tyson has rejected such calls.

When asked if and when Tyson would make the call to shut a plant down due to the virus, Croston said the company was working with local health departments.

“We work with local and state health departments, along with our facility operations team, to make timely decisions about operations,” she said.

There have now been 33 total recoveries reported within the county.

The first COVID-related death, an Emporia woman in her 70s, was reported Sunday.

Such foolishness and bickering. If you want to know why this coronavirus has happened, then learn the "Truth" Let he who has ears, let him hear"! >>>>https://www.youtube.com/watch?v=4uE4URxeeoE

LMAO that is hilarious.

Why the hell am i paying $500 a month for medical insurance when the arrogant medical bureaucracy has decided they will only see patients with ONE single medical condition?

Because you voted for a capitalist health care system?

I did not vote for the communist Obamacare. For some reason, I don't like paying 6.3 bureucrats, along with the doctor, whenever I visit the docotr You don't know much, about this 3000-page unconstitutional monstrosity Obama"care", do you? Like how the medicrats can DEFINE new diseases, let's says the "disease" of Morons Applauding Demagogues Syndrome" (look in a mirror) and prescribe MANDATORY treatment for the new "disease" of MADS. Let me know when you find the last few shreds of your wits.

Another day, another exponential increase in the corona-virus cases. OMG! Holy Panic, Batman!

How many of these new cases are in the hospital? None?

What the hell happened to a woman's right to choose? I thought a woman could do with her body as she wanted to. Well, according to the Kommandant Kelly and her Supreme Poodles, she can get an abortion, but anything else, like taking a walk, no, that's in violation of the Kommandant's orders. Alles in ordnung? Nein? Ja, Kommandantette Kelly!

Oh come on. You sound like a raving lunatic.

It makes sense that the meat packing facilities are seeing higher numbers as COVID lives longer in cold, dry places.

I wonder why some of the clusters are specifically named and others not. I don't remember anyone naming the cruise ship that the first of the infected were on, you know, the ones that got COVID going here. There is a working conditions thing involved here, as well as, a what happens with people working here illegally in the country, you know, those people that have a job because some of US citizens think they are too good to do that work and prefer Uncle Sam supporting them. So, maybe this will serve as a wake up call across the country as the homeless and those illegally present suffer at a greater rate than the rest of the population. Those are two problems that should have been taken care of. Seriously, who do you think those mass graves were for in NYC?

Good Grief where do you get your news? Mass graves for the illegals and homeless? Sounds like you're making stuff up again... sure enough, google says the graves are for unclaimed bodies and people whose families couldn't afford a burial. I'm sure there's an illegal or homeless person here and there... but definitely not just for them. Hart island has been a mass grave site long before this pandemic.

Some days you do okay giving facts, others you just kind of make stuff up and present it as fact... just like your "Open Business Lock Down Kelly" event nobody has heard of. There are people still posting there trying to defend you (since you didn't want to face the facts yourself) who suggested it's because I searched wrong, but even he couldn't find this imaginary protest you've named "Open Business Lock Down Kelly". Sad.

Its not called that its called Operation Gridlock Topeka! Here is their organizer page.

Yes, I know that. I was just trying to get the correct information out. The person I responded to thinks this event is called "open business lock down kelly"

Their plan is to sit in their cars and honk from noon-2pm. Their message is "We want our right to assemble protected, we want to open our businesses up, fill the churches, but we're all to scared to get out of our cars and actually be near each other, so we will just sit here and honk."

Their plan is to "gridlock" the road around the capital, but they plan to leave a clear path for first responders, and respect all traffic laws? At least the other protests were actually protests, not just some little sideshow planned out from start to finish. If you're going to protest, get out there and own it. Stand next to your fellow supporters, show you're not scared of any virus, don't just sit in your car being annoying for 2 hours... Either way it will be fun to watch and laugh at these idiots.

So Aim_Low, CNN - that is - your "NEWS" - has lied to the American public for the past 3 years, constantly, every day, lied to us about Trump, but now you claim they are telling the truth? What a crock.

What's "sad" is people with CBNN blinders on, like you, and you also know that the reason "no one ever heard of the rally in Topeka" is because Facebook's Zuckerberg has CENSORED all pages that mention ANY anti-Democrat governor protest gatherings.

I honestly think its needs to be shut down

There is no way to even know if these people contracted the virus at work or not. Also, the tests are not that accurate, notice that they never tell anyone how effective they are. This is not a food-borne virus. I think plants usually close when they don't have enough workers to produce the products. It is virus, and people will get it. The whole idea behind social distancing (which I have heard experts say really doesn't do anything) was to slow the spread, not end the spread, so hospitals (most of which are empty or closing at this point due to no customers) would not be overwhelmed. Please do some research on the virus to include websites that look at the science behind the virus. Washing your hands and not touching your face is the #1 defense. Masks tend to have people touching their face when they adjust them when out in public with their hands, bringing the virus, if they have been in contact with it, to their face. Again, this is not a food-borne virus. From this article: https://www.fda.gov/food/food-safety-during-emergencies/food-safety-and-coronavirus-disease-2019-covid-19

"Currently there is no evidence of food or food packaging being associated with transmission of COVID-19."

"Unlike foodborne gastrointestinal (GI) viruses like norovirus and hepatitis A that often make people ill through contaminated food, SARS-CoV-2, which causes COVID-19, is a virus that causes respiratory illness. Foodborne exposure to this virus is not known to be a route of transmission."

A little education can go a long way in conquering the fear of COVID 19. It is unfortunate that these employees have tested positive, and I hope they all have a speedy recovery like the majority of people that contract the virus.

Unless Tyson can show that they are taking more effective measures to control the outbreak among their workforce I can foresee that the Lyon Co. Health Officer will be making a similar request to temporarily close the plant as did her counterpart in Black Hawk Co., Iowa.