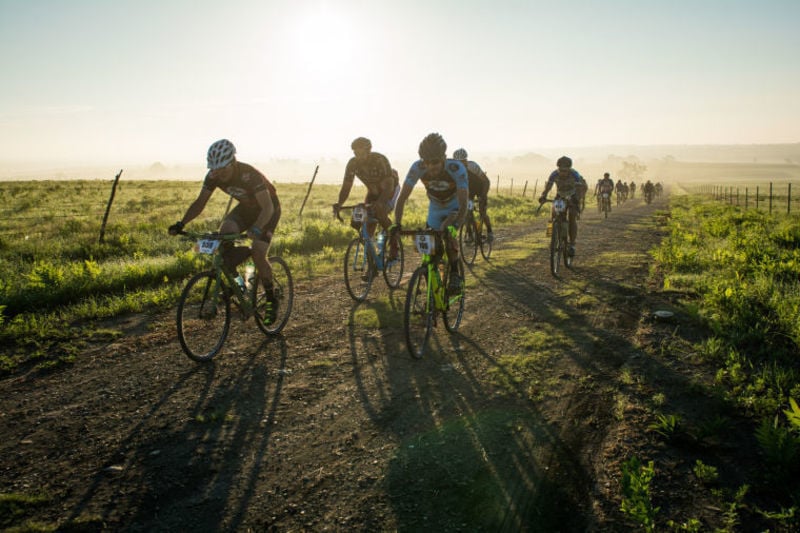 Dirty Kanza riders battle not only the gravel, dirt and hills, they also must test their strength against the sometimes stifling heat. 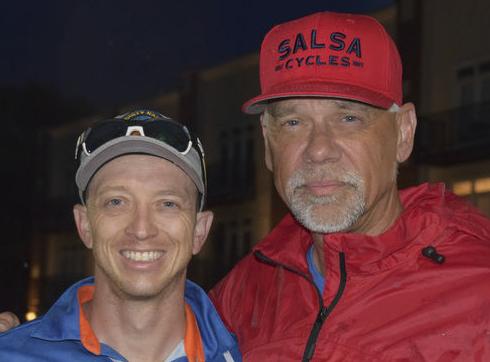 LeLan Dains and Jim Cummins at a past Dirty Kanza event. 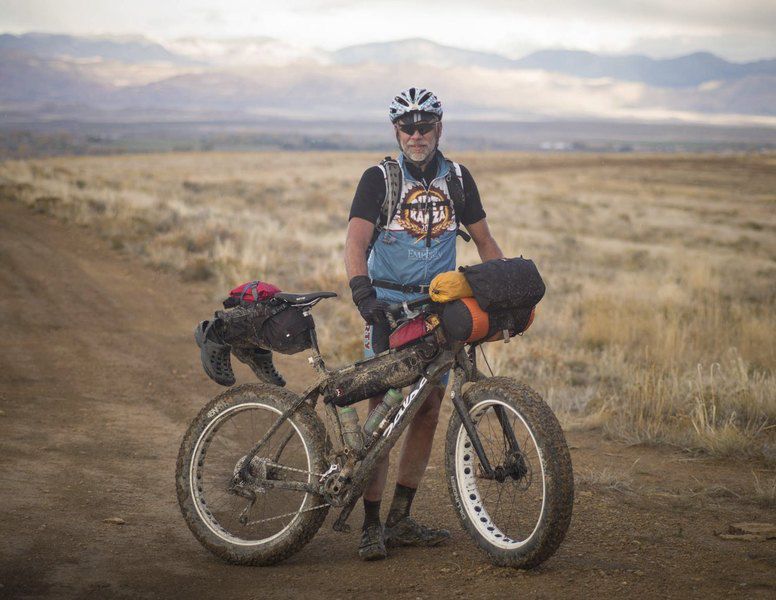 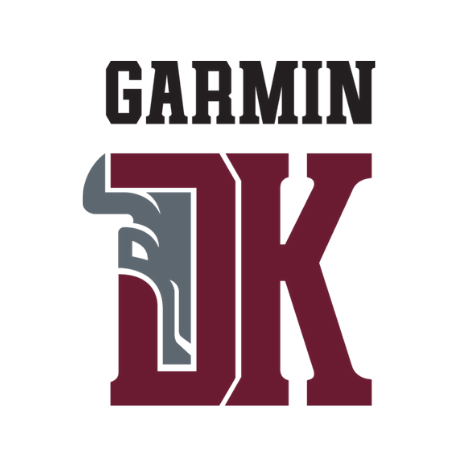 Dirty Kanza riders battle not only the gravel, dirt and hills, they also must test their strength against the sometimes stifling heat.

LeLan Dains and Jim Cummins at a past Dirty Kanza event.

Life Time Fitness is forging ahead with more changes to the Dirty Kanza after the exit of the race's founder last week.

Jim Cummins, who founded the race in 2006 along with fellow cycling enthusiast Joel Dyke, and Life Time, who purchased the race in 2018, came to a "mutual agreement" to part ways June 20 after Cummins received some backlash for a post he made on his personal Facebook page, June 19.

The post asked his followers to watch a video in which two police officers attempt to apprehend Daniel Clary, a Black man who shot an officer during a 2018 arrest in Pennsylvania. Clary was later convicted and sentenced to 110 years in prison. The officer survived.

Cummins was comparing the incident to the death of Rayshard Brooks, a 27-year-old Black man from Atlanta, who was killed June 12 after he fell asleep inside his car outside a Wendy’s restaurant. Brooks was reportedly inebriated, took a taser from one of the officers and fired the taser twice in their direction. He did not make contact and was shot in the back while running away. His death was ruled a homicide.

Cummins released a statement to Road Bike Action Magazine on Sunday citing his support of strong and diverse communities, and his regret for how his words were received.

"There's been a lot of turmoil over the fact that Jim's not here anymore," Operations Manager LeLan Dains told The Emporia Gazette. "Jim has always been concerned with what's best for Dirty Kanza, and he genuinely felt what was best for Dirty Kanza was to move forward without him. He felt he had caused too much controversy and chaos."

And, as the race moves forward without its founder, new discussions regarding its name have surfaced.

Dains said some concerns surrounding the name of the race had been brought to DK leadership years before Life Time's acquisition of the event. The concerns brought some surprising news to the team — that the name "Dirty Kanza" could be construed as a racial slur against Native Americans meaning “dirty Indian." Although no ill-intent was meant when the race was named, Dains said attempts were made to reach out to the Kaw Nation at that time.

"From the get-go we did make attempts to speak with the Kaw Nation," he said. "For a couple of years, as things often play out, we simply weren't able to get a response and get an opportunity to sit down with representatives of the Kaw tribe. So, it kind of stayed as it was for a few years."

The conversations quieted until earlier this year. New voices brought new concerns about the name. Petitions were created and widely circulated. And this time, Dains said Cummins was able to meet with the chairwoman of the Kaw Nation.

"What was ultimately decided was, they appreciated the innocence from which the name came because there was absolutely no malintent when it was created," Dains said. "'Dirty' as we know was for the dirt roads and the fact that you get all that dust on you while riding. 'Kanza' comes from the area and the people we get our state name from. No one connected the dots that 'Dirty Kanza' could potentially or at one time was used as a derogatory slur."

In April, Life Time — with the backing of the Kaw Nation — announced the race would not change its name. But, behind the scenes, Dains said the internal conversation about the issue never stopped.

"While we came to the decision now, this has been an ongoing debate for a couple years," he said. "Not only on, 'Do we or do we not change the name?' but also, 'What do we change it to?' We already had a foot in that direction, but we didn't have a timeline as to when to make that happen, but the conversation has been open."

Dains estimated the rebranding process would take anywhere from 8 - 10 weeks, meaning Life Time may be ready to announce the name by September when — barring any major developments with the pandemic — the DK is set to return.

"Changing the name does not change who we are, nor does it change our mission," Dains said. "Our mission is to provide life-enriching outdoor experiences to build community, locally, regionally and beyond. That will continue to happen. That mission will not change and that mission is who we are. This event will still be amazing. It will be amazing for the locals who live here, volunteer and participate in it, as well as the international audience and comes here and is wowed by the opportunity they have to ride when they come here. All of that was bigger than one single person. It's bigger than all of us. It will continue on."

For those who voiced concern that Cummins' exit and the coming name change were the first two indicators that the DK would be moved to another city in the coming years, Dains said he could only offer his word that this was not the case.

"Even when we are all gone, Life Time understands that this event is Emporia," Dains said. "There's no taking this event out of Emporia. There's no other place that has the geographic location or the people to make it as special as it is. The Dirty Kanza is Emporia."

This has to be an episode from the "TWILIGHT ZONE",,,,,,,,,,,,,,,,are we going to restrict our speech to grunts and farts ,is this the outcome you demos want..

I wonder when this political correctness trend will hit the Chiefs and their totally offensive "Tomahawk Chop"? [beam]

Try and stop it. Chiefs kingdom will live on as will the chop!

Would anyone be interested in buying T shirts , bumper stickers and 14 foot DIRTY KANZA welcome banners ??

Asking for a friend

A name change is it? Like that's going to solve anything. This is just plain stupid. No other word for it.

Yes. Keep in Mind, the White men, who couldn't make it in their own countries, found out they could come to North America and Steal Land from the Indians. When they came here, they did not Learn or even Expect to Learn the Indian's languages. However, now, THEIR Decedents expect it of people coming now!

And while you’re at it, be sure to give all riders Participation Trophies so no one will get their poor little Feelers hurt .

What does this stupid remark have to do with anything. If you aren't a participant, shut up. It's none of your business.

ITS TIME FOR PEOPLE TO GROW A PAIR ! AND STOP CRYING ABOUT WHAT WORD MAY OFFEND SOMEONE ! TAKEN THE WRONG WAY! AND MOVE ON ! NOTHING WILL EVER BE PERFECT....

Well, you and Trump and Republicans demand people agree with you. And, with you and Trump and the Republicans...YOU demand Political correctness. People have to agree with you...Trump fires anyone who doesn't or won't lie for him. Political Correctness is not a one way street.. To be a Conservative, you are required to tote the Conservative/Trump line. No Republican is allowed to have a different opinion on anything..

Let's leave the use of the names of native american groups to those people themselves. The Kaw Nation can use the name Kanza, not anyone else.

Agree. However, I didn't know Kanza WAS AN Indian name, word. I have not really liked the word "dirty".

Kanza is the name of a Tribe.

Thanks for the information. With that, then, DIRTY preceding KANSA is a put down. If it was changed to SUPER KANSA, that would work! They Still keep the KANSA name! And, that HONORS Indians! Of course, Honoring anything decent is Contrary to Trump and the Republicans. They prefer to Honor Slave HOLDERS, people who enslaved others, beat them...ripped open their flesh and then poured brine in the wounds. And, of course, the name given to those people is "Southern Gentleman!"

May I suggest " train wreck "

More than likely some white person was trying to show how a shame they were of being white and decided to stir the pot. I am of white,Cherokee and Creek descendants and I am proud of all.

I agree booker5m, this idea to change things that may or may not oppress or cause someone's feelings to be hurt has to stop. We all just need to stop and change what is really needed not something that can be taken 15 ways from Sunday.

I SUPPOSE YOU SUPPORT ROBERT E. LEE THAT WAS GUILTY OF TREASON, TAKING UP ARMS AGAINST THE UNITED STATES...TO KEEP HIS OWN PERSONAL SLAVES. ROBERT E. ENJOYED BEATING THE "HEAVEN" OUT OF HIS SLAVES, RIPPING OPEN THEIR BACKS, THEN POURING BRING INTO RIPPED OPEN SKIN AND MUSCLE. AND, TRUMP LOVES HIM!

No, it Does NOT have to Stop! And, you know it won't! Most of think Trump's Lying and Evil "has to stop!" But,we know it won't! Your "has to stop" comment is totally beyond Stupid! But, all of you Jim Jones, er, uh...Crooked Lying Donald Trumpers love it! You have "drank the cool aid!" (In case you don't know who the Rev. Jim Jones was, he was a deranged Minister who set up a camp somewhere in the Central America area. Seems like about a thousand "believers" followed him. He was evil. Wouldn't let people leave, some did escape. He was a man of God, like you belive Trump is. Well the Rev Jones forced, coerced his followers to drink poisoned Cool Aid. They all Died, Jones, too. Dead. Dead! You are sick people!

Well, you've got your head WAY UP THERE!

With your comments, we now all know where your head is! Anyone have any "air freshener?"