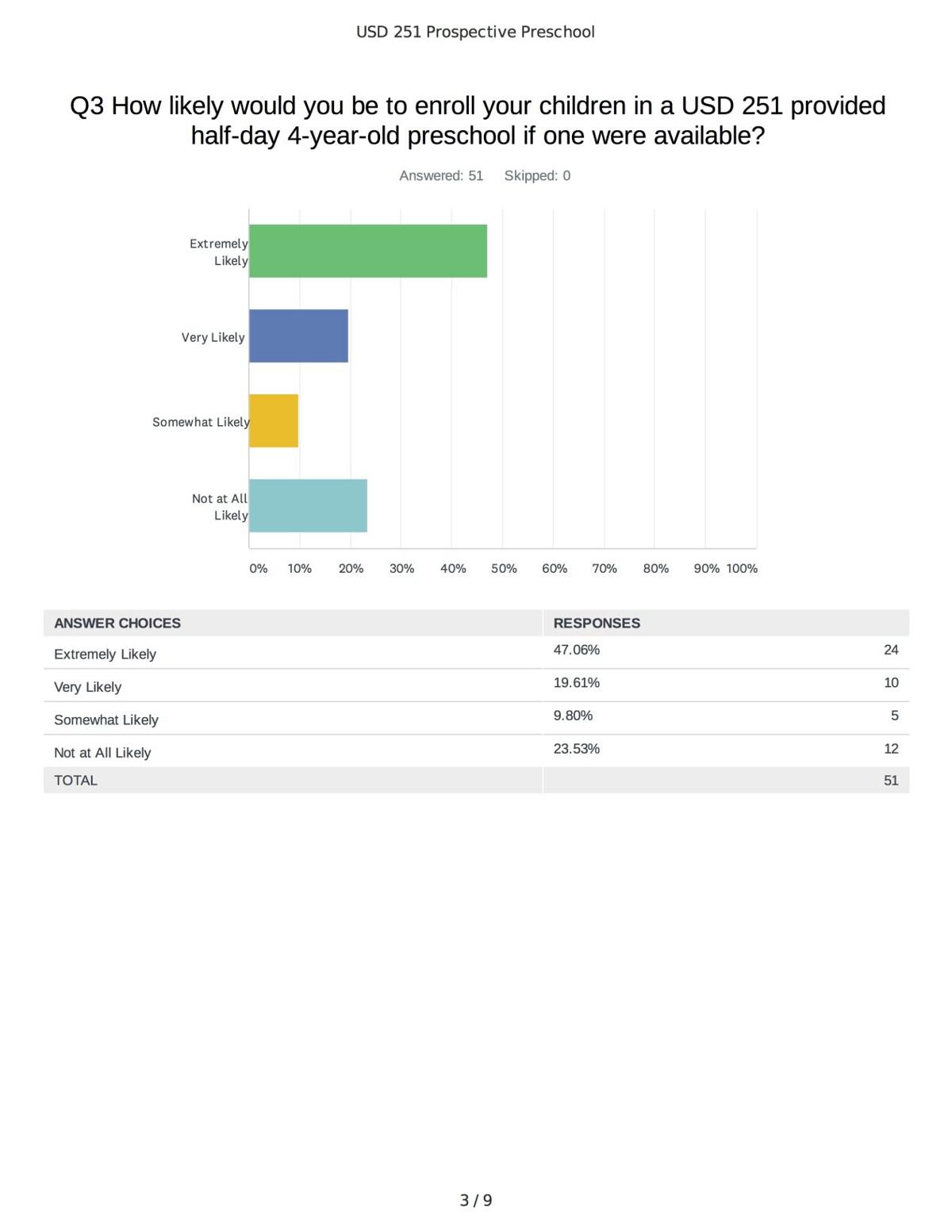 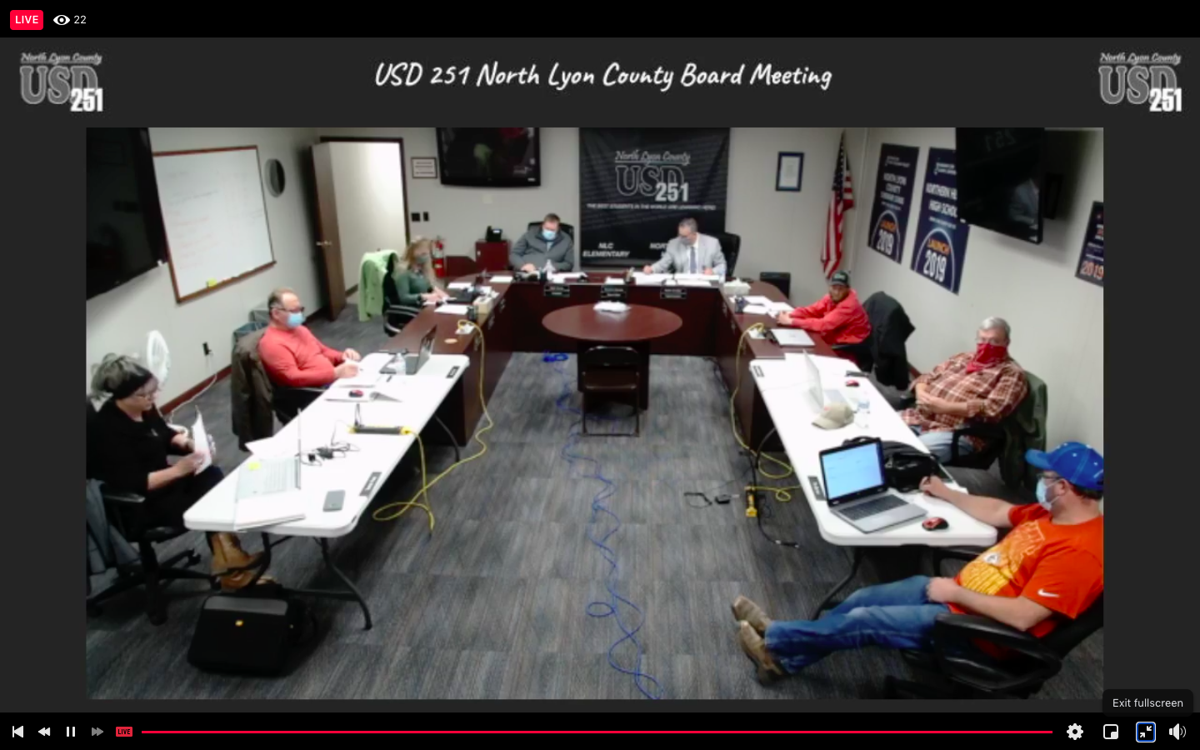 The USD 251 Board of Education meetings Wednesday evening in Americus.

The USD 251 Board of Education meetings Wednesday evening in Americus.

The USD 251 North Lyon County Board of Education continued discussions on the possible opening of a district preschool, Wednesday evening.

School Improvement Coordinator Becky Mayes presented board members with the results of a survey sent out to district families about their thoughts on bringing a preschool into the district. There is currently one preschool program in the northern part of the county — the NLC Youth Association and Child Development Center, located in Allen.

Mayes said there were more than 80 children identified in the district that could potentially benefit from a preschool. They received 51 responses to the survey, which asked questions about the need for a preschool, if they would use a full or half-day preschool, if they needed transportation and more.

Superintendent Robert Blair said there were a number of considerations and items to complete before getting a preschool off the ground. He said while he would love to recommend starting a preschool in the fall, the most feasible option would be fall 2022.

He said his recommendation would be to start in “layers” with beginning with an all-day 4-year-old classroom and then expanding from there.

The major decision would be where the preschool would be located — either a new construction or remodeling in an existing district building.

The district would need to pass all required inspections, which would take anywhere between 60 - 90 days, and grants would need to be written and applied for within certain time frames.

While board members echoed Blair’s enthusiasm for getting the preschool started sooner, they overwhelmingly agreed that moving forward conservatively was the better move in order to do things the right way.

“I sure like the recommendation of waiting and doing it right,” said Board President Matt Horton.

In other discussion items, the board discussed the district’s ongoing response to the COVID-19 pandemic. As of Wednesday, there were 28 students on quarantine and one student who was confirmed positive. Four staff members were quarantined with two positive for the novel coronavirus.

Horton expressed frustration that so many students were having to quarantine, given that the Centers for Disease Control had released plans to reduced the quarantine period for those exposed to COVID-19. The revised quarantine guidance, released in December, says people who have been in contact with someone infected with the virus can resume normal activity after 10 days, or seven days if they receive a negative test result. That’s down from the 14-day period recommended since the pandemic began. The Kansas Department of Health and Environment adopted similar guidelines but left it up to counties on how to proceed.

During the board’s Dec. 9 meeting, Blair shared that Lyon County Public Health had decided to remain under a 14-day quarantine instead of adopting the CDC’s shortened quarantine plan.

Horton suggested the board consider adopting a policy that followed both KDHE and CDC guidelines, in order to get students and teachers back into classrooms faster if they weren’t showing symptoms and had not tested positive for COVID.

After some discussion, it was agreed that the board would seek guidance from public health officials and from the Kansas Association of School Boards attorney before any decisions were made. A motion was made to table the discussion until a special meeting, a date for which is not yet set.

They also approved a $83,804 purchase from Midwest Bus Sales for the purchase of a new 53-passenger Thomas bus. The bus comes with a 3-year warranty and the district will receive a $20,000 rebate after the bus is delivered.

Let me read between the lines for those not familiar with this school board. “New” construction will be deemed the “best” deal and “while we’re building” it makes sense to add a new gymnasium and cafeteria. The location is already in stone, Americus, because the only other district building is in Allen which has a preschool. Remember, this is the district that has recently closed two schools. One located in the central part of the district and one in the eastern part. Both had gymnasiums. The board’s unspoken motto is “One for all … and it’s all for Americus.”

But, I’ve been curious about this for some time. We read about the school board meetings in Emporia and North Lyon County. Why do we never read about South Lyon County? I have every confidence that their board must be equally as entertaining.

Didn't this district plan on putting a preschool in the Reading school before they sold it? They are addicted to OPM others peoples money. And this is in the poorest county in the state. The Admire school is on ground that was given to the district. But it came with the condtion that if it was not used as a school the ownership returned to the city. Ooops they thought they could make money on it too. So this school board is determined to put up a bond issue that is unlikely to pass because of the nasty way people who do not live in Americus are treated. They had two good schools they didn't need and now need room. A new building is what they have wanted forever now they have a new Superintendent to tell their stories to .

Good observations. If my memory is correct, NLC got an offer from a private dyslexia clinic that saw value in Reading, in the teachers and the smaller class sizes. They offered to train all the teachers at their cost and refer students to Reading in order to keep the school open. Having a school with all the teachers trained in teaching the dyslexic student would have been a tremendous addition to their district, surrounding districts, students and parents. Unfortunately, the school board suffered from the same affliction we are seeing in Washington right now. They spitefully closed the school because of three failed bond elections.