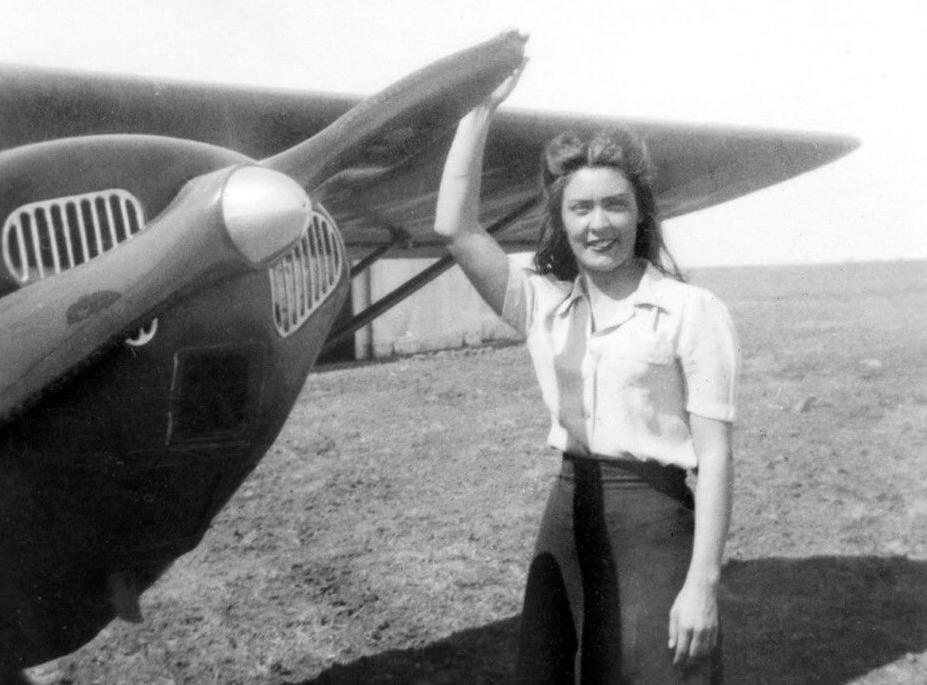 Edna Bell-Pearson stands with an airplane in the 1950s in Marysville. 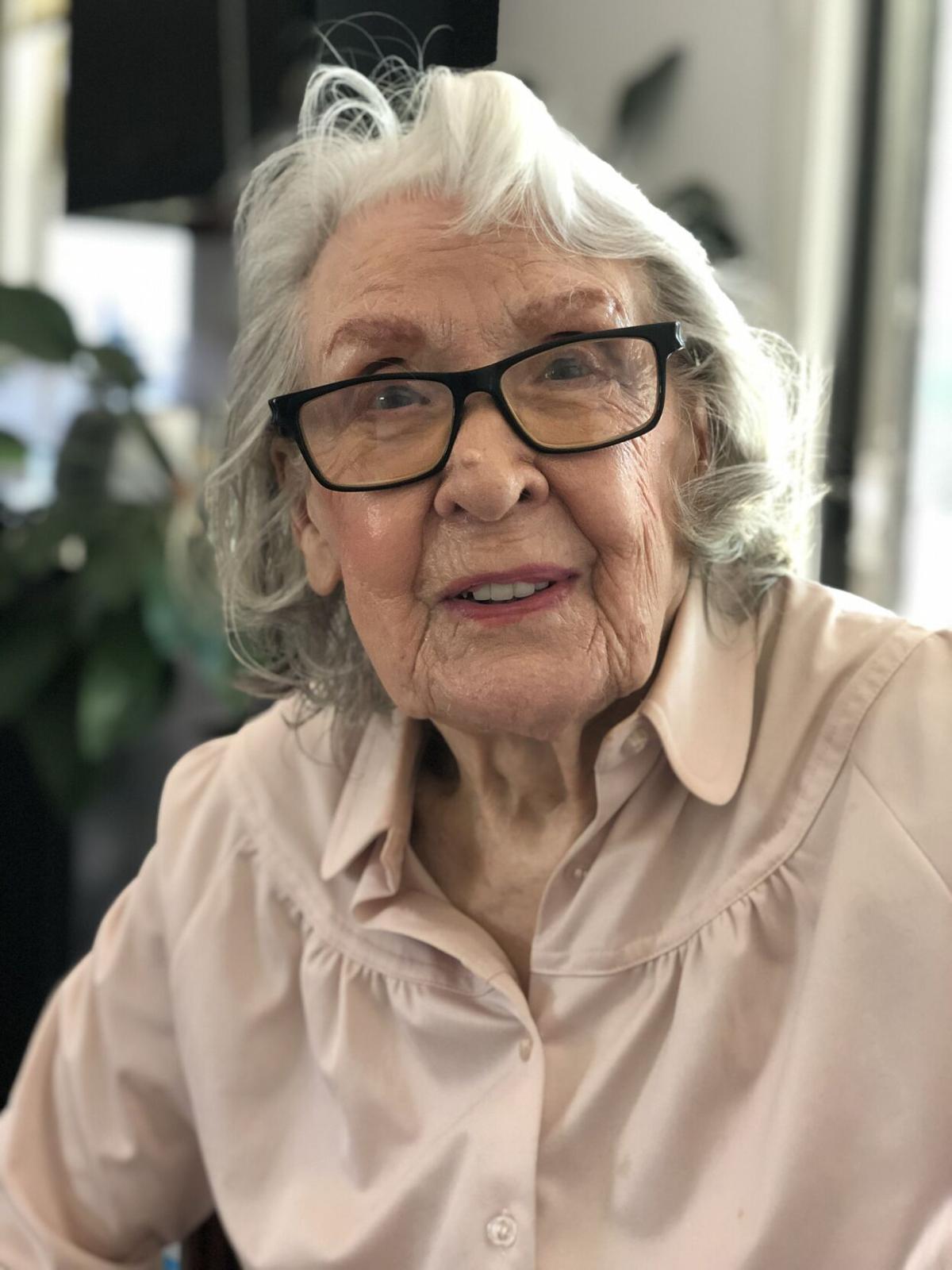 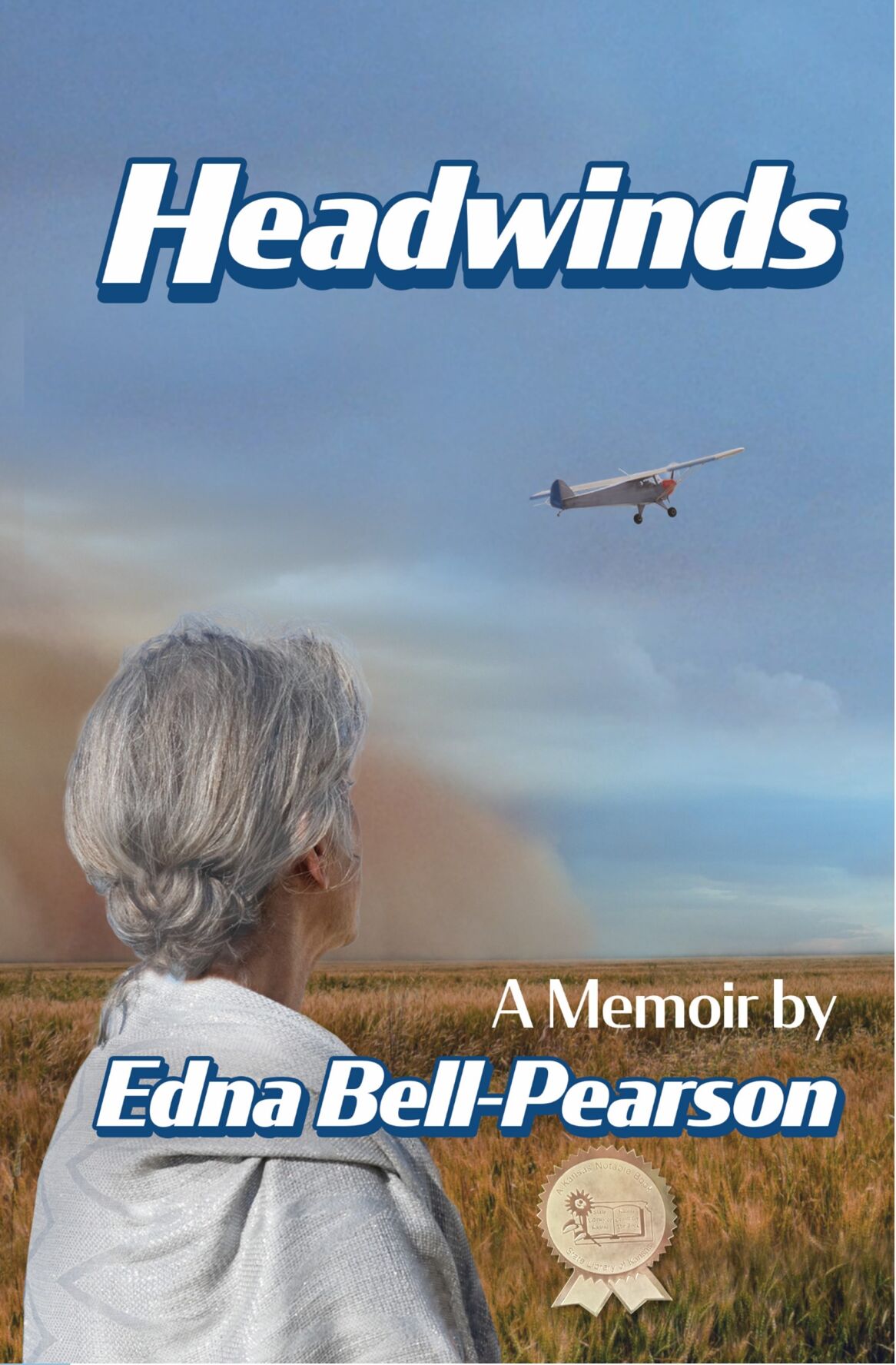 Edna Bell-Pearson stands with an airplane in the 1950s in Marysville.

“When World War II makes her way to southwest Kansas, Edna Bell-Pearson’s life is forever changed,” the book description reads. “After meeting the man who is to become her husband — a pilot stationed in her hometown of Liberal — Edna moves to the opposite corner of the state. She is instrumental in starting what will become the Marysville Municipal Airport.”

The book revolves around aviation history in Kansas, and it is also important to note that it is a book about a headstrong woman making unprecedented strides in an industry saturated with men, as was common for the time.

“She was not your traditional 1950s housewife,” Meadowlark Publisher Tracy Million Simmons said about Bell-Pearson. “That airport would not have happened, in my mind, if she hadn’t been there, because she was out there with her husband working 24/7.”

Not only did Bell-Pearson help establish and run the airport; she also learned how to fly.

“I liked flying lower to enjoy the view of the countryside,” she writes in “Headwinds.” “Once airborne, I leaned back and looked about savoring the beauty of the rolling green hills, the river with its border of green trees and shrubs, winding through the valley; the lush fertile land planted with various crops.”

It wasn’t long ago that air travel was fairly inaccessible to the public. The evolution of flying has been turbulent, and Bell-Pearson is here to share those emerging and expanding times. The book captures the excitement of air travel; people would go to the airport on Sundays to watch the pilots take off and practice flying. Bell-Pearson also organized Flight Breakfasts, where people would fly to cities in surrounding states, have breakfast, and fly back.

The fascinating narrative and Kansas theme helped land this book as one of 15 on the 2020 Kansas Notable Books list this summer. Simmons and Bell-Pearson are both ecstatic about the win. Simmons was familiar with Bell-Pearson prior to this book and said Bell-Pearson’s writing captured her voice well.

“I’ve known Edna’s name probably most of my life,” Simmons said. “When I was a kid in Dodge City, she wrote a column for the Dodge City [Daily Globe].”

Now, at 99.5 years old, Bell-Pearson continues to share her voice through writing. She said writing is a “way of life” for her and simply just what she does. Ever since she was 5 years old, she has not stopped writing.

“I just write what I feel like,” she said, adding that she highly encourages anyone who is interested in writing to jump in and just write.

When asked about the reason behind writing “Headwinds,” Bell-Pearson said she had to write about something and thought someone might be interested in this story. She recognizes the historical importance of the book and her unique perspective among it all. Being a memoir, Bell-Pearson’s voice is sincere and strong.

“As they (bomber pilots) posed — stiffly and self-consciously, so the camera would capture the highly polished wings and the bars newly-pinned to their uniforms — I always felt a little sad,” she writes. “Soon they would leave for duty overseas, a new detail of bright young faces would appear, and the cycle would be repeated.”

In “Headwinds,” it is noticeable that everyday observations and experiences play a large part in the story. Being a close observer and a thinker helps writers be writers, Bell-Pearson said. The things other writers notice always strikes her.

A little over four years ago, Bell-Pearson started corresponding with Simmons about the press and the kinds of books it publishes. She said publishing with Meadowlark has been “really great,” so much so that she plans on submitting a chapbook poetry collection during Meadowlark’s open reading period this fall.

Meadowlark is primarily Kansas-centric, meaning the authors published have a connection to Kansas and/or write about Kansas. “Headwinds” was a sure fit, satisfying the press’ preferences and the competitions’ requirements.

“I love to read, and I have always looked for the Kansas stories,” Simmons said. “Meadowlark has become a way of highlighting those stories.”

Simmons submits the books Meadowlark publishes each year to the contest and won the 2016 Kansas Notable Book for Mike Graves’ “To Leave a Shadow.”

Bell-Pearson is also no stranger to publishing or literary achievements. Her book Fragile Hopes, Transient Dreams and Other Stories — one of seven of her books — is one of “150 Best Kansas Books,” according to the Kansas State Library, who is also responsible for awarding the annual Kansas Notable Book Award.

“A committee of librarians, academics, and historians nominated titles from a list of eligible books, and state librarian Eric Norris selected the final list,” the official award announcement said. “In 2006, the first Kansas Notable Books list was announced. Since then more than 200 books have been recognized for their contribution to Kansas literary heritage.”

Receiving the award is a token of validation. It increases sales, and every library in the state gets a copy of the book. Previously, the publishers and authors would visit the Kansas State Capitol to accept the award and a medal, as well as join in the book fair. This year, the excitement will be shared remotely, for now.

Book stores can order “Headwinds” through any of their regular channels, though Meadowlark receives a larger portion of the sale when purchased directly from the press. To reciprocate the appreciation and value of purchasing directly from her, Simmons makes it a point to support various independent bookstores.

Currently, Bell-Pearson is keeping a journal called “99 and Counting” and will wait to provide more details until later. To learn more about Bell-Pearson, visit www.bell-pearson.com.

Congratulations to Bell-Pearson and Meadowlark Books! We need more Kansans stories told and preserved this way! Now if only our fair community would support a locally owned-and-operated bookstore....

How very true. Small presses are disappearing little by little all over this country. They are precious few and an integral part of our landscape.