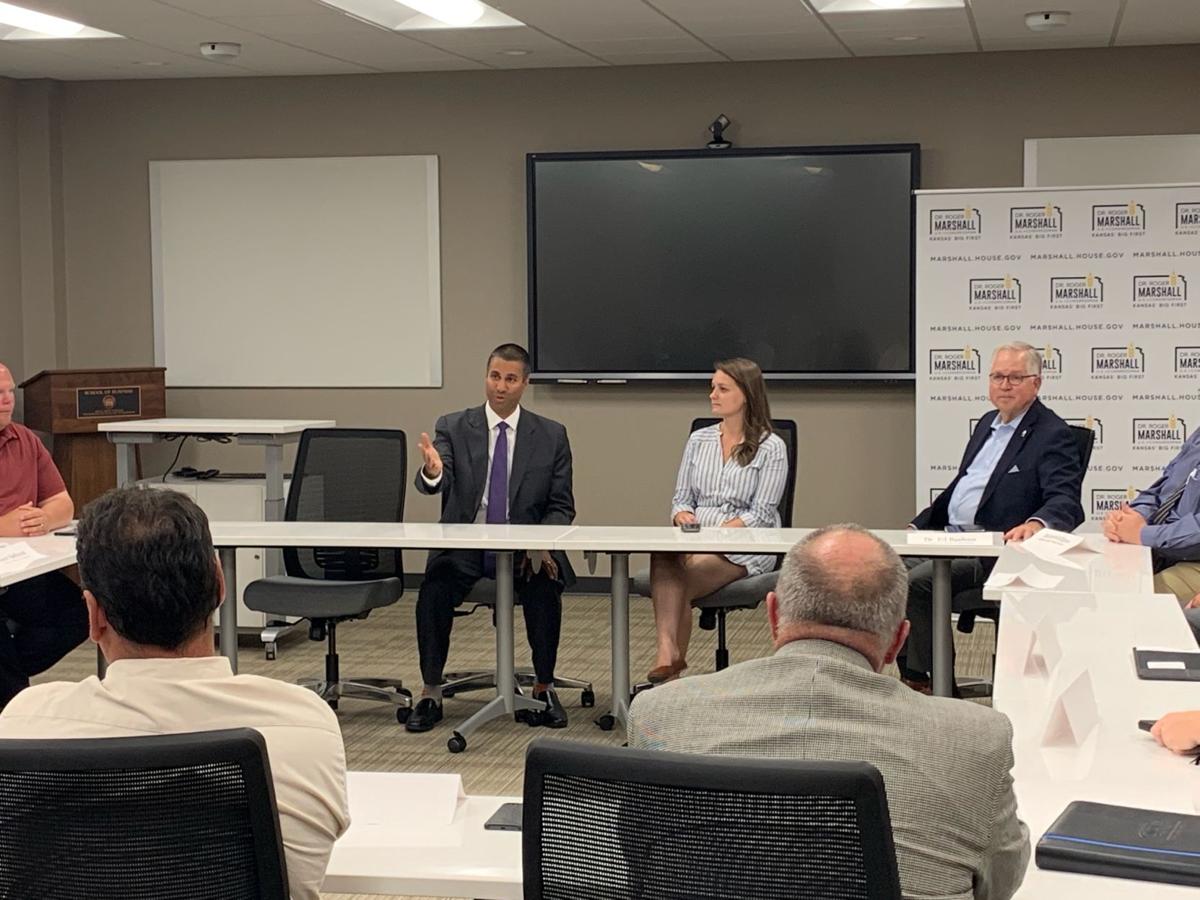 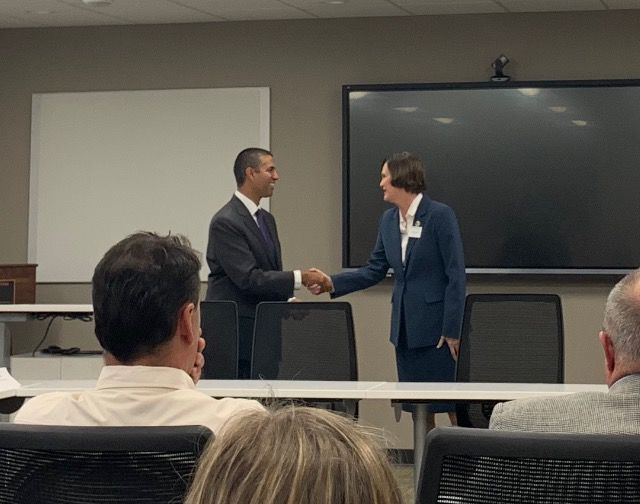 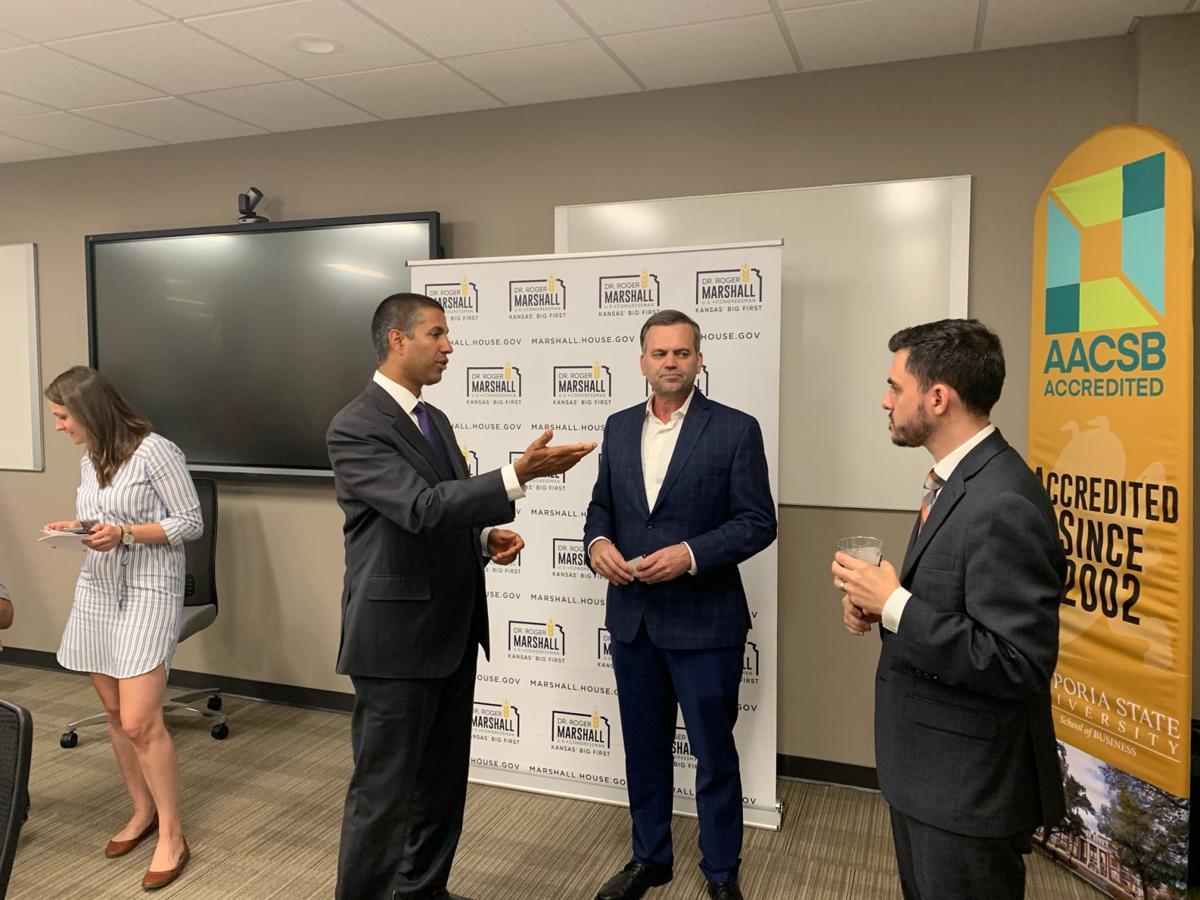 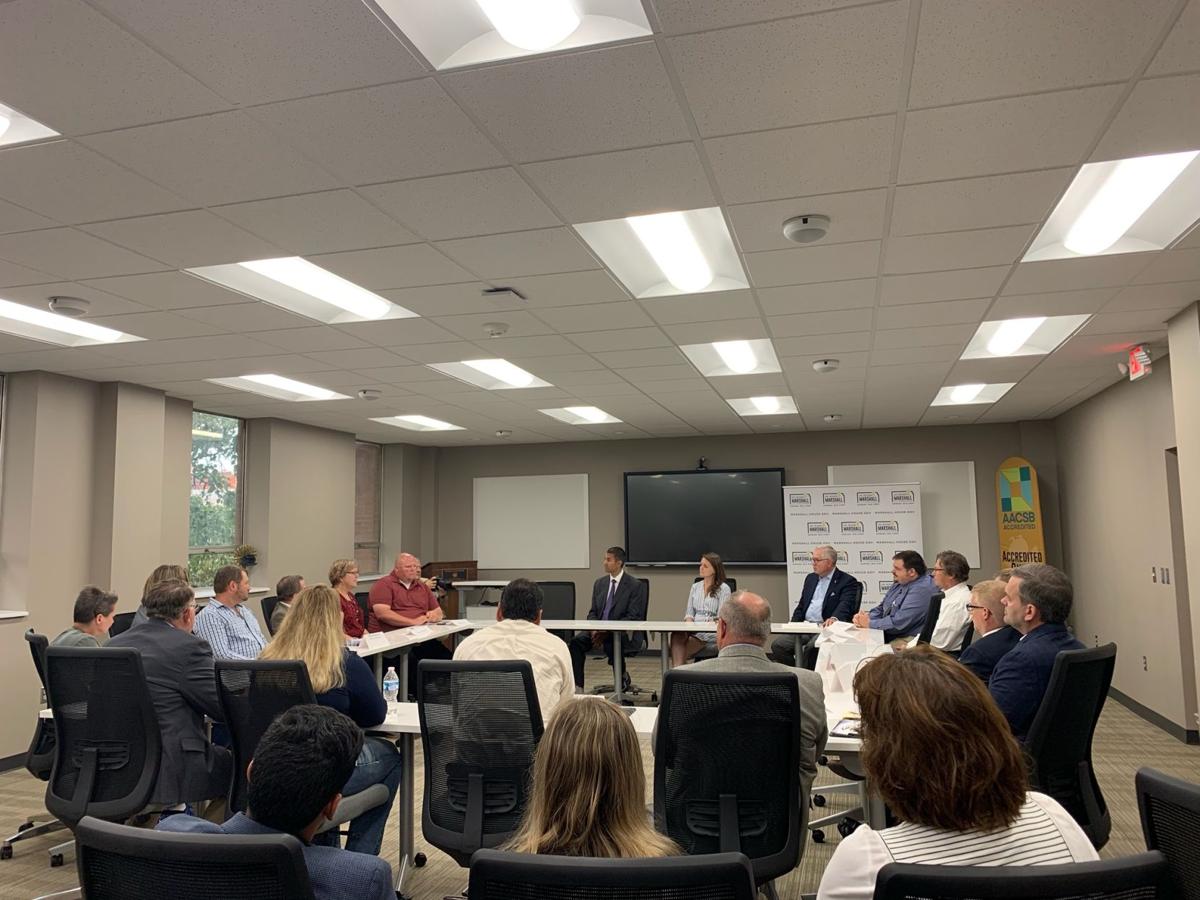 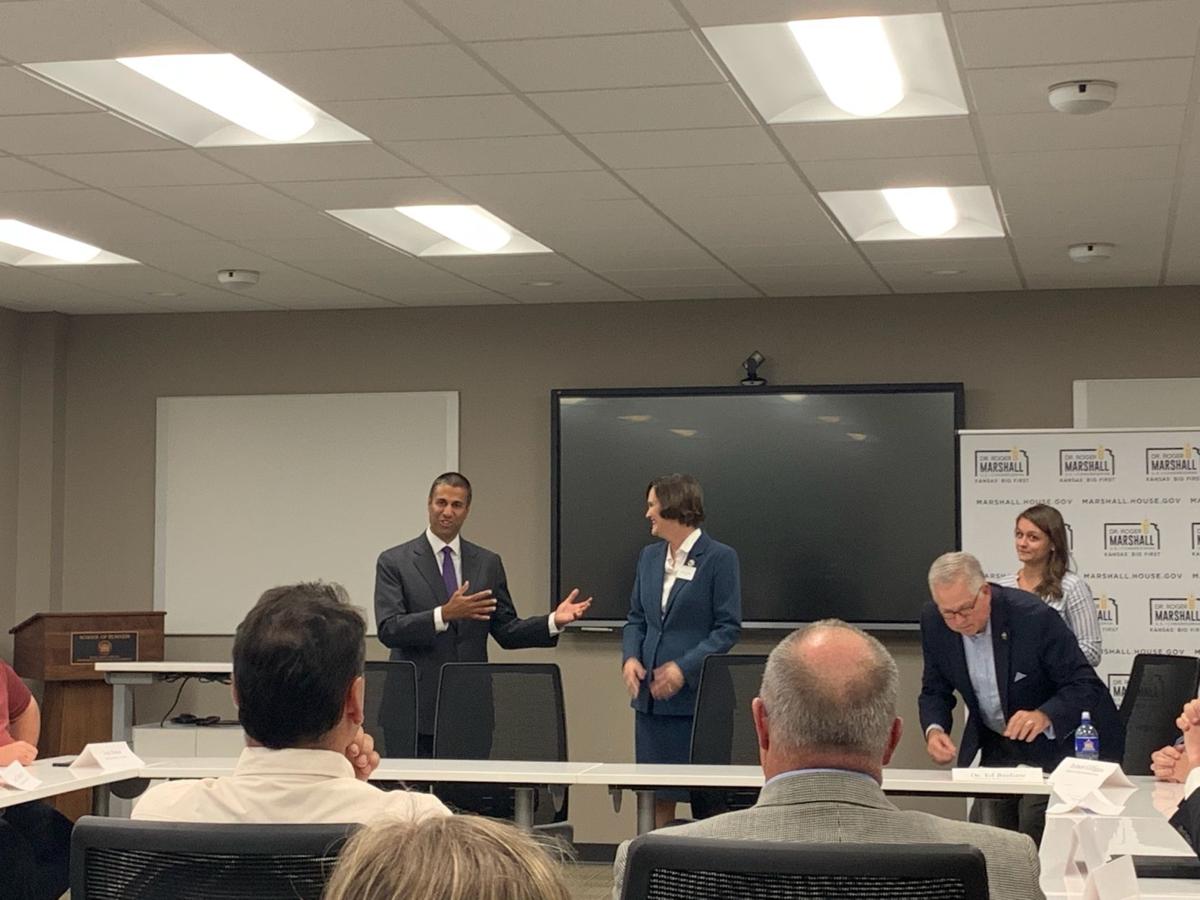 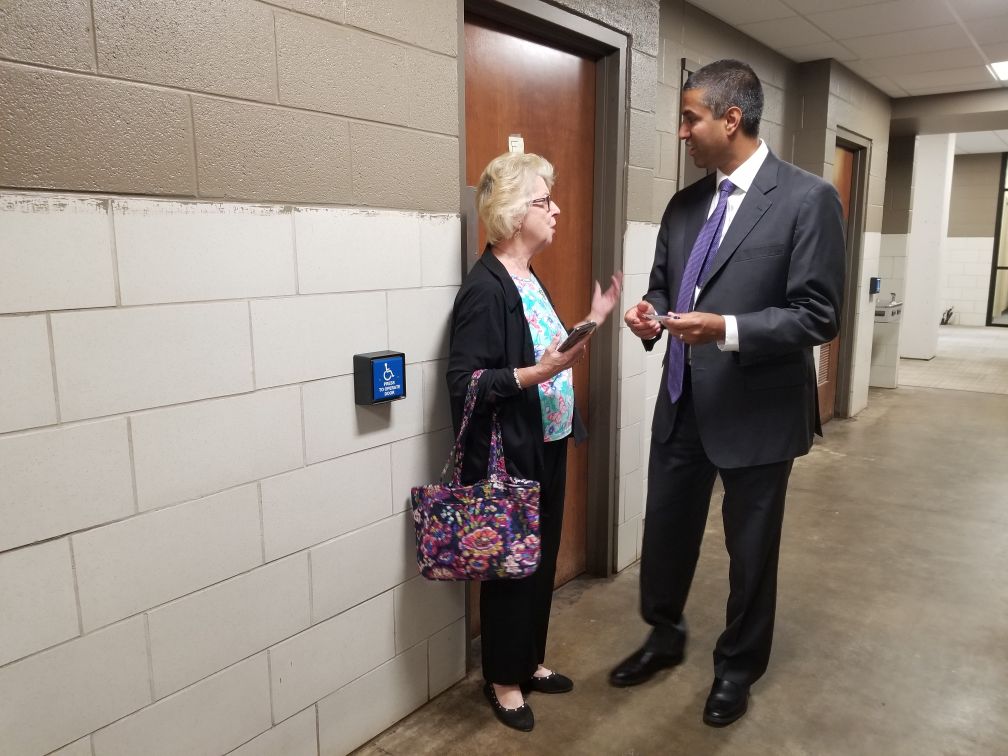 The internet is often referred to as the “information super highway.”

“Early on, the towns that died were the ones that didn’t get the railroad passing through,” Gilligan said. “Then, when they were building the interstate system, if there wasn’t an exit to your town, that just continued the trend. Now it’s broadband. The towns that don’t have access will be the next ones to get bypassed.”

Pai — a native of Parsons — made the stop in Emporia as part of his week-long Midwest Digital Opportunity Tour. The tour and roundtable at ESU is focusing on rural broadband connectivity and its relationship to economic development. Representatives from rural providers along with business owners, local officials and other stakeholders joined him for the discussion, which was sponsored by the office of Rep. Roger Marshall.

Pai opened the discussion by telling the group one of the key priorities for his office “since day one” has been closing the “digital divide” between rural and urban areas. One of the ways Pai said the FCC has done that under his leadership is by changing the rules and regulations regarding how providers can connect fiber networks to existing utility poles. Another is through the Connect America Fund, which offers federal funding through a “reverse auction” to carriers in order to accelerate buildout and offer fixed broadband to underserved communities.

“We want to have a model of regulation where small companies have every chance to compete,” Pai said.

“I want to make sure that no matter who you are, what you look like or where you live, you have a chance to start a business and be able to compete on a global scale.”

The key to that, however, is providing people in rural areas with the digital infrastructure required to run a business online.

Pai said if people — particularly entrepreneurs and those just entering the workforce — don’t believe they have opportunities in the digital future, they are more likely to leave for larger, urban areas where those amenities are available.

This is a trend that has previously been recognized locally when representatives from organizations such as the city of Emporia, Lyon County, the Regional Development Association, ESU and Flint Hills Technical College tried to get the THINK Emporia initiative off the ground. The project was, at the time, contingent on receiving a federal i6 grant and would have brought work-from-home tech job opportunities to Emporia and the surrounding area.

THINK Emporia did not receive the grant, but the idea of Emporia becoming a tech hub in a rural setting is not one on which anyone involved has given up.

Emporia is well situated with fiber connectivity provided by ValuNet, which was represented on the panel by President Rick Tidwell. Expanding out into smaller, even more rural communities, however, is where the difficulties often lie. Expansion is expensive, so much so that the cost is often prohibitive to both the providers and the municipalities in need of connectivity.

Rob McDonald, an employee of Madison-based provider MT Networks, said his company was asked to bring fiber to six communities in Coffey County. They were able to do so for city offices, businesses and hospitals, for example, but could not expand to residential service.

“It’s been a struggle,” McDonald said, after Pai had asked if any providers had attempted to build out.

But it isn’t only cities which are becoming dependent on connectivity to carry out their day-to-day business.

Jacquelyne Leffler, a fourth-generation owner of Leffler Farms, Inc. of rural Americus, said she “brought technology” to the operation. Through use smartphone apps, tablets and several ag-based programs, much of what she does requires high-speed internet connectivity.

“I could pull out my phone right now and tell you what my dad is doing harvesting corn 20 miles from here,” she said. “If there is no broadband, I can’t capture that data.”

She said their connectivity on the farm runs on DSL, not fiber. A drawback of using the ordinary copper telephone lines for broadband through DSL, as opposed to fiber, is that weather can impact her ability to get online. She said her operation was shut down for about two weeks because of the flooding in Lyon County this past spring.

“A lot of people don’t understand that we’re very advanced in our occupation,” Leffler said. “But we’re being held back by a lack of reliable broadband.”

Pai said, as a native Kansan, all of these issues are of high importance to him. He said he will continue to work within his role as the top official in the FCC to help make fiber expansion easier and cheaper for both providers and consumers.

He said he was encouraged by what he heard from everyone else involved in Thursday’s roundtable.

“It’s invigorating to me to see that Kansas is on the leading edge of some of these issues,” Pai said. “Whether it’s broadband providers or the people who are using broadband, they’re working on a local level to help close that digital divide. That’s probably the best part for me — seeing that the people in my home state are not at all behind on anything we’re working on.”

He added that he, like those involved in THINK Emporia, believes Emporia is well-situated to be on the “beachhead” of innovation and entrepreneurship in the Midwest. That, he said, will allow even smaller, surrounding communities to thrive, as well.

“I’ve visited a lot of towns Emporia’s size and a lot of them want to build incubators for innovation,” Pai said. “I really think Emporia can be one of those communities.”

"A lot of people don't understand that we're very advanced in our occupation. But we're being held back by a lack of reliable broadband."