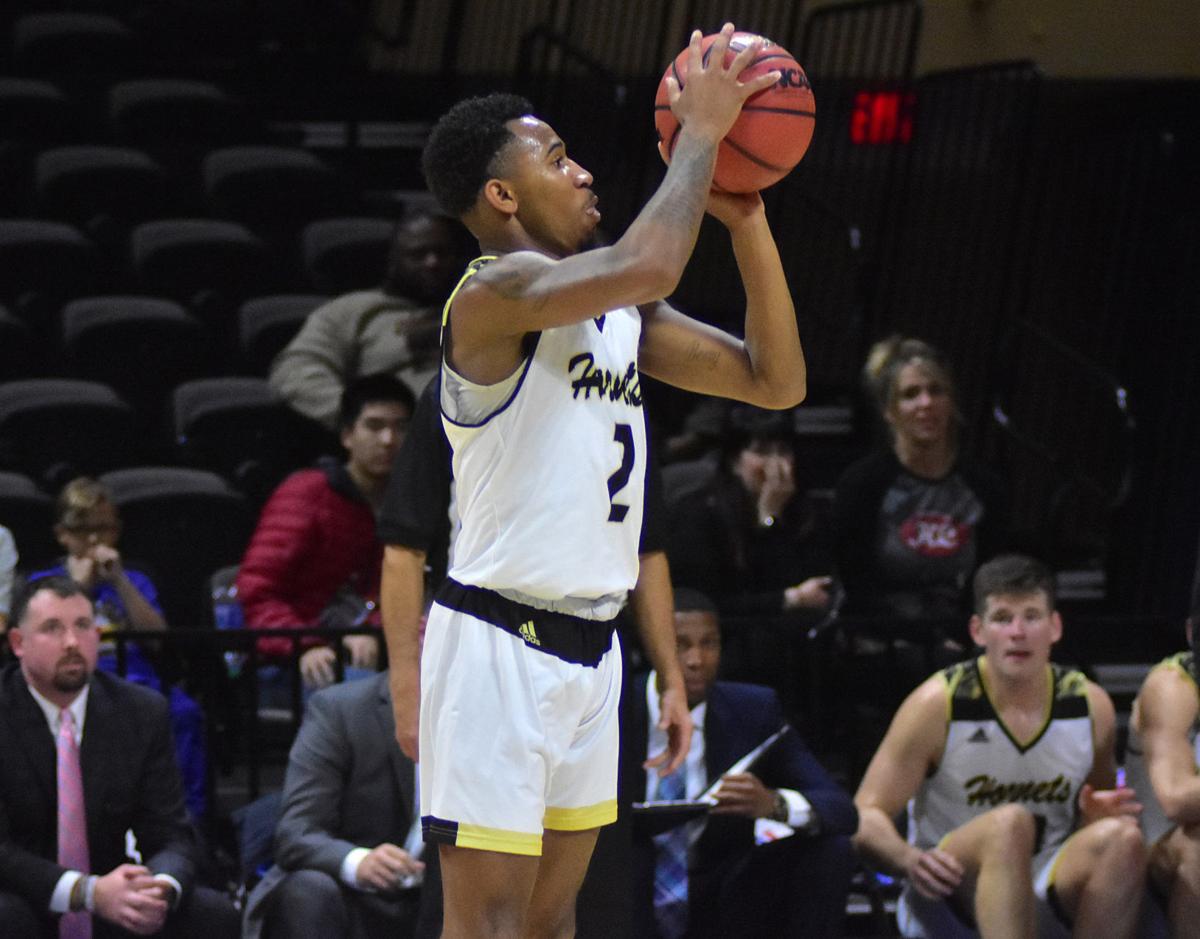 ESU freshman Keyon Thomas (2) scored 22 points for the Hornets as they kept William Jewell at bay in the second half of a 76-57 win on Tuesday night in Kansas City. 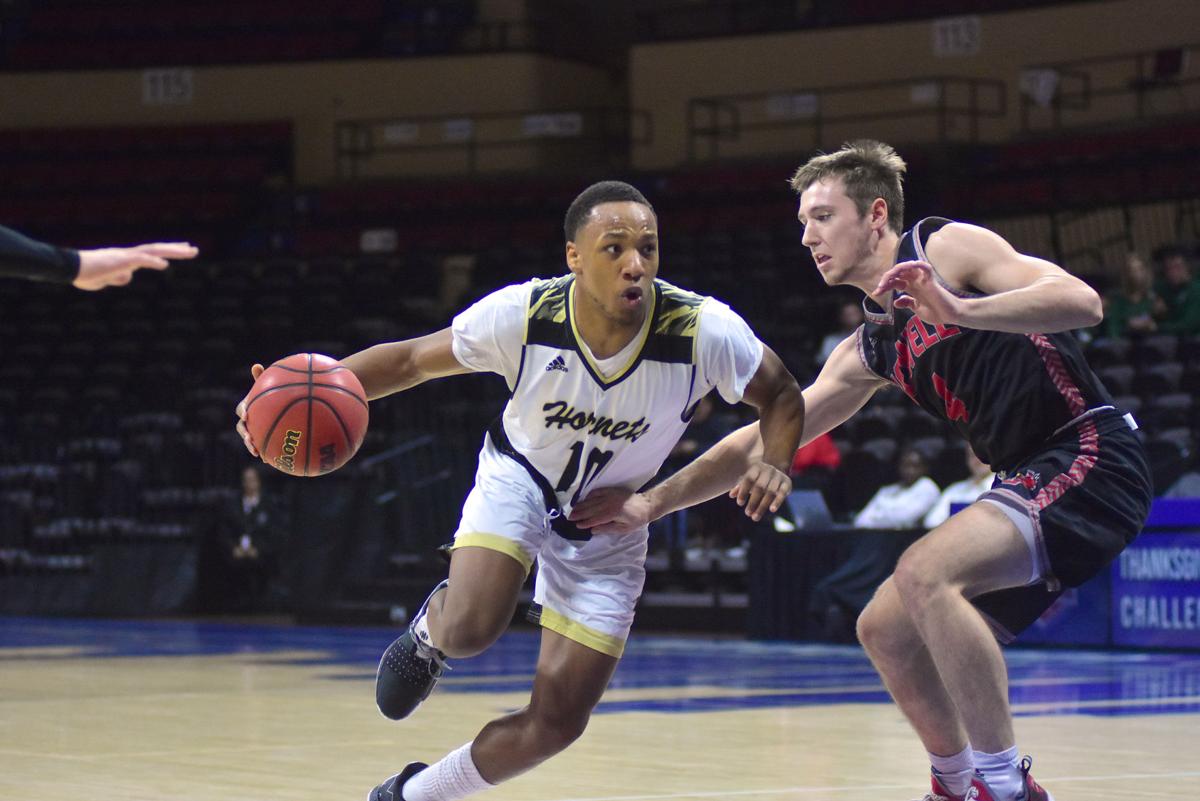 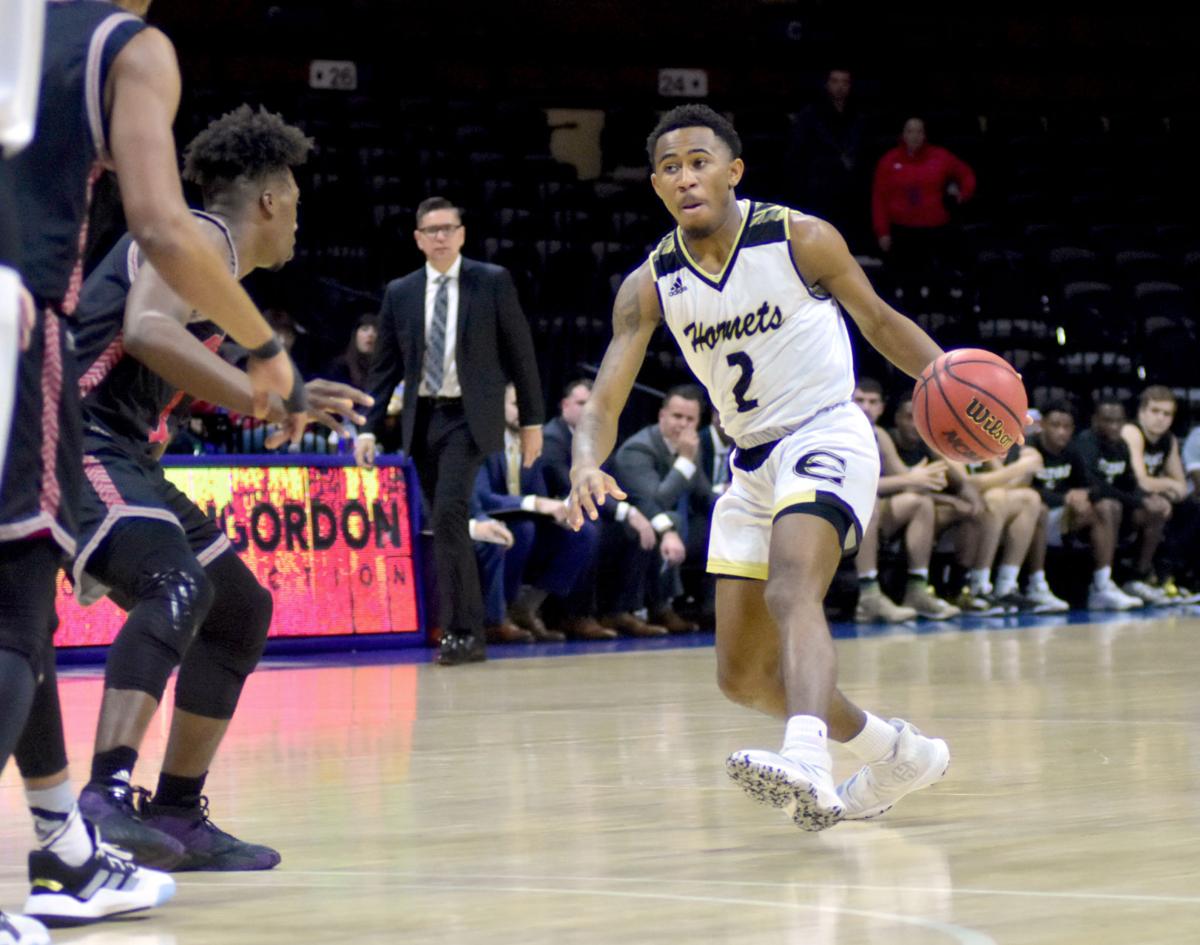 ESU freshman Keyon Thomas (2) scored 22 points for the Hornets as they kept William Jewell at bay in the second half of a 76-57 win on Tuesday night in Kansas City.

KANSAS CITY, MO. — Emporia State Head Coach Craig Doty likened his team’s effort on Tuesday night to both of the Hornets’ overtime losses in the past two weeks.

The only difference? The Hornets pulled out a win.

ESU saw a lead dwindle a single possession for a majority of the final five minutes, but never surrendered it in a 75-67 victory over William Jewell in the MIAA Thanksgiving Challenge at Municipal Auditorium in Kansas City.

No single facet provided the biggest change, though a small series of them each made life easier on the Hornets.

ESU missed just two free throws, both coming in the first half. It dominated the defensive glass and defensively held its opposition to less than 31 percent from the floor in the second half.

“One, we made free throws,” Doty said. “We made nearly 90 percent of them tonight. We got defensive stops down the stretch, the other thing was we secured rebounds. We did not look good offensively down the stretch, where we looked good in those other games offensively, but (then) we weren’t making free throws, we weren’t getting rebounds and we weren’t getting stops. The offense will come, we’ll be just fine on that end, we have enough firepower there, but who’s going to guard for us, who’s going to rebound and then who has the intestinal fortitude to step up to that foul line and bury those free throws down the stretch? Tonight, all of those guys did those things down the stretch and that’s why we’re feeling a lot better about ourselves than we were against Rockhurst.”

The offense that did work well for the Hornets mostly went to junior Jumah’Ri Turner and freshman Keyon Thomas. The duo scored 22 points apiece, making 15 shots in 34 attempts and going a perfect 10-for-10 from the free throw line.

“When you’ve got guys that can get in a rhythm just like you, it takes a lot of pressure off and opens up the game,” Thomas said of Turner who scored a majority of his points in the first half. “That’s when I create my scoring opportunities, when they lock in on him. It makes it tougher on them and easier on us.”

The freshman from nearby Bonner Springs, who had a large contingent of fans present, continued a stretch that has seen him score more than 20 points in three straight games.

“Playing in a great venue, playing in my hometown, it was nice,” he said. “I just played with a little bit of swagger tonight (and had) fun.”

“I’m so proud of him,” Doty said of his starting guard. “He turned 19 yesterday ... his whole fan base was (here), what a fun night for him. We had minimal expectations for a freshman coming in and playing a huge role, especially at the point guard position — which is the toughest spot. Not only did he carve out a spot in the rotation — he was terrible (in) the first two games, we couldn’t put him on the floor — he has now leveraged himself into a starting spot and he’s one of our best players. That just shows how tough he is mentally, how he can get through things. So much more is to come out of Keyon Thomas in the future.”

Thomas, Turner and Dallas Bailey were 6-for-6 from the free throw line in the game’s final 25 seconds to assure the win.

ESU (4-3) will host the University of St. Mary on Friday night at approximately 7:30 p.m. in the final pre-MIAA contest.