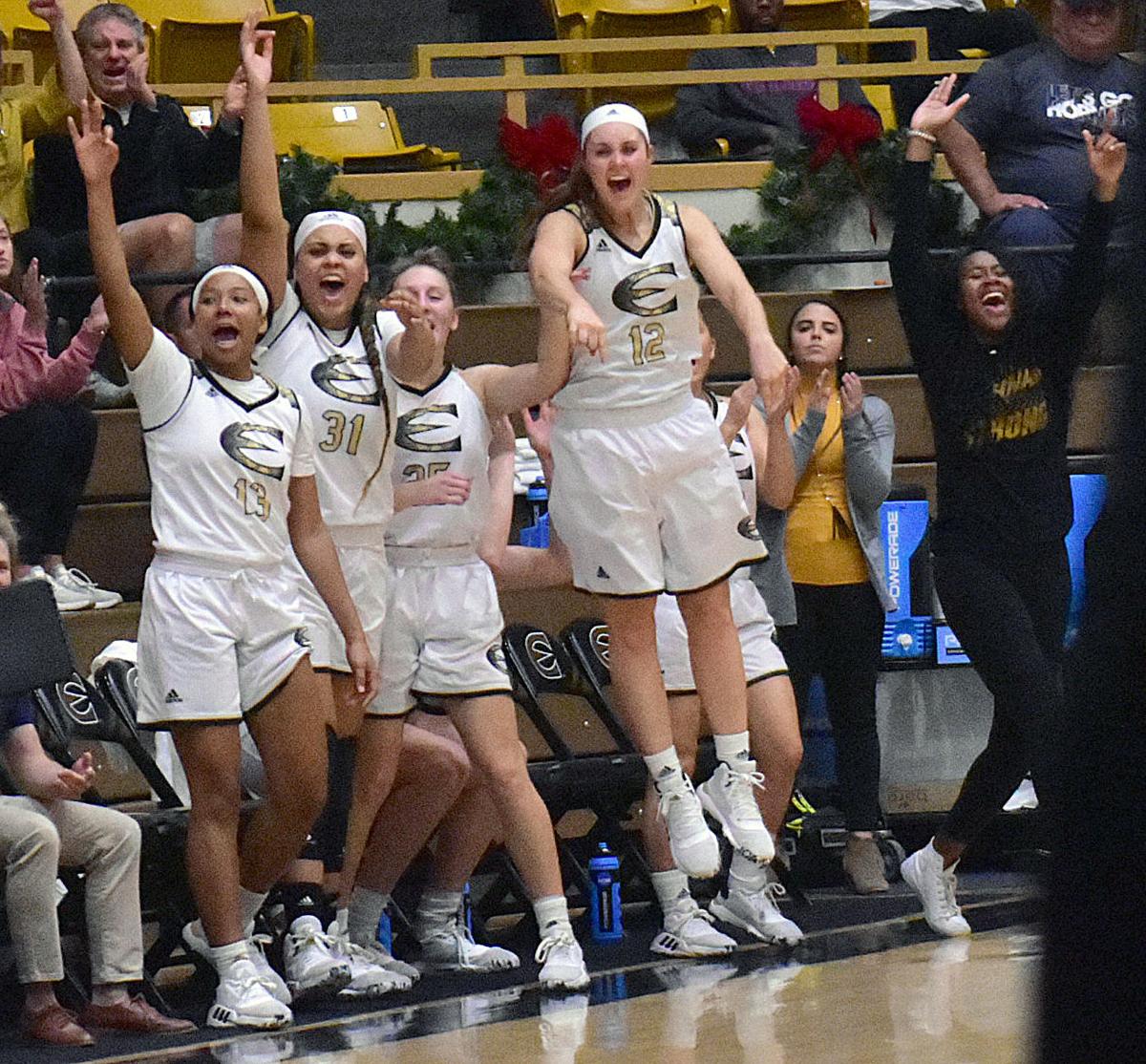 The ESU bench reacts to a 3-pointer from Jessica Wayne that beat the halftime horn. The Lady Hornets carried a 37-26 lead into the break. 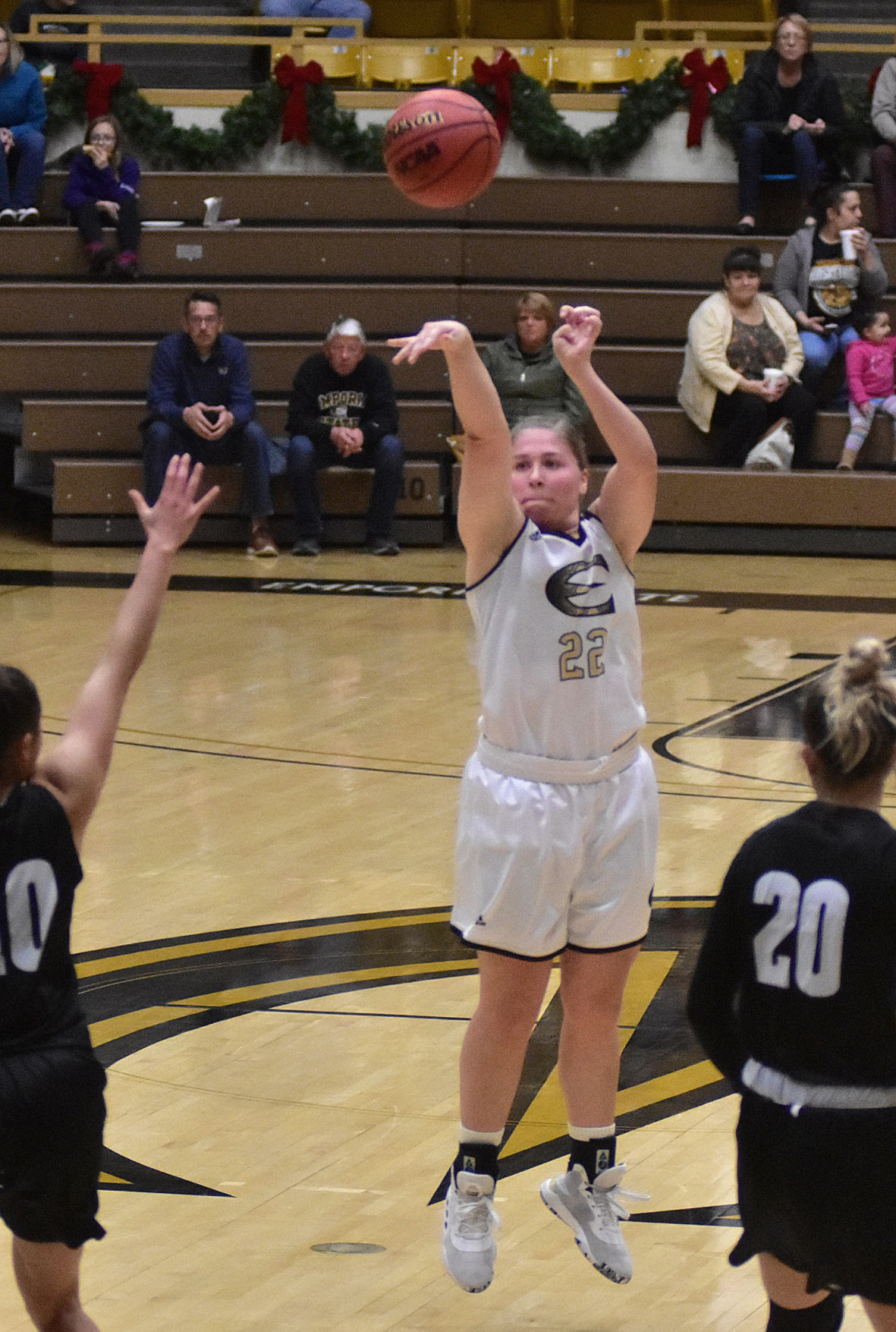 ESU senior Mollie Mounsey (22) was 2-for-7 from long range, scoring nine points for the Lady Hornets in a 70-49 victory over Nebraska-Kearney on Thursday. 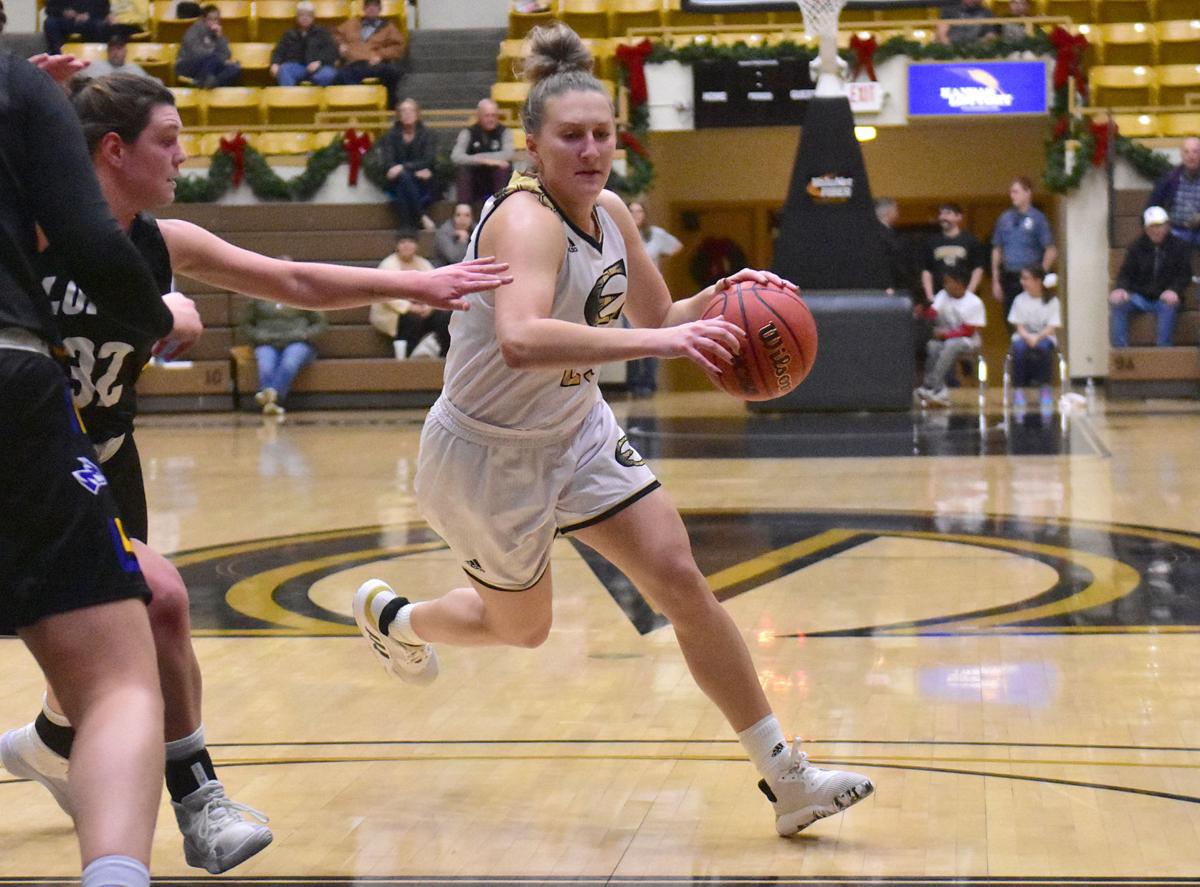 Karsen Schultz (25) drives to the basket during the Lady Hornets' victory over Nebraska-Kearney on Thursday. 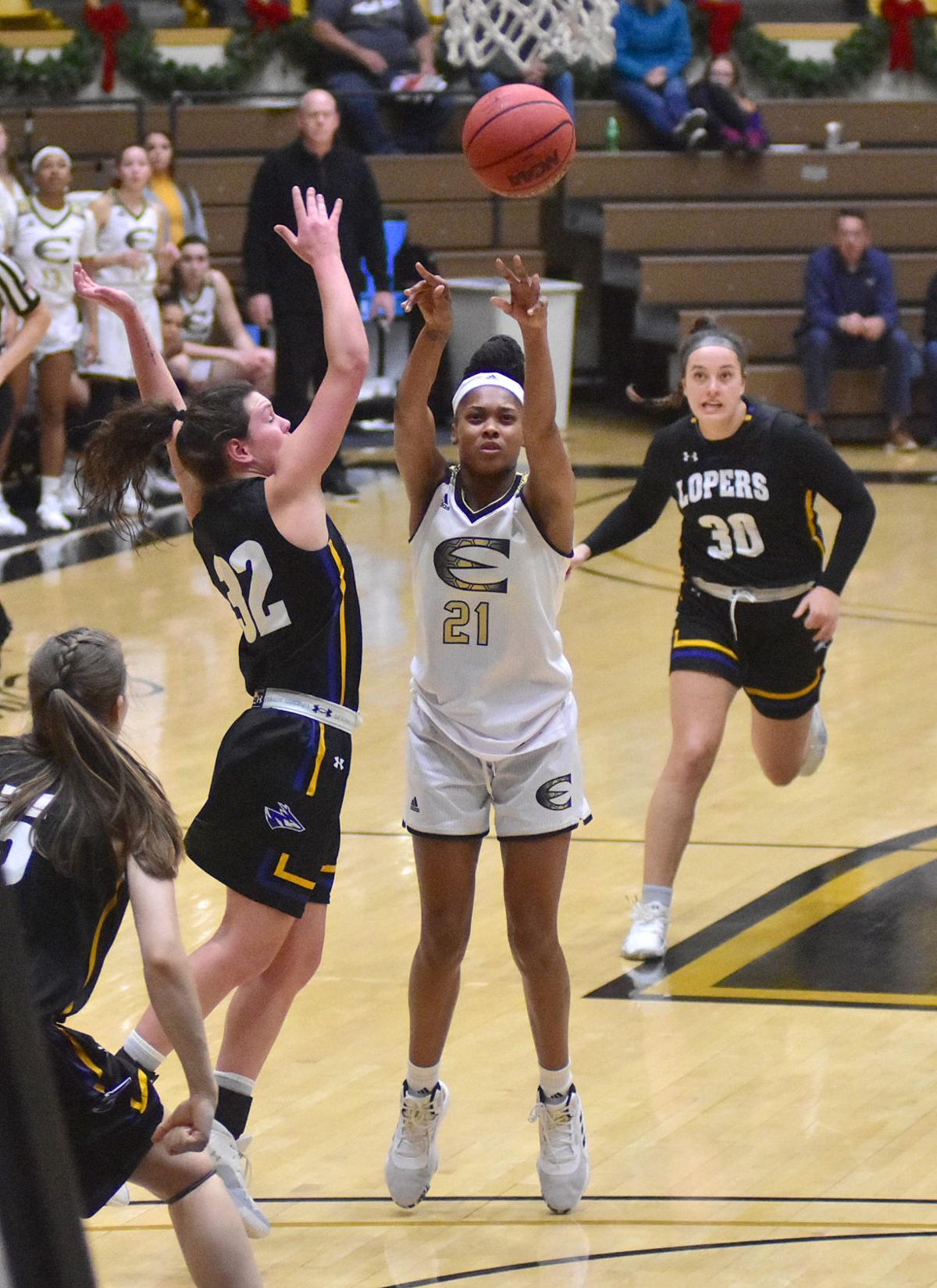 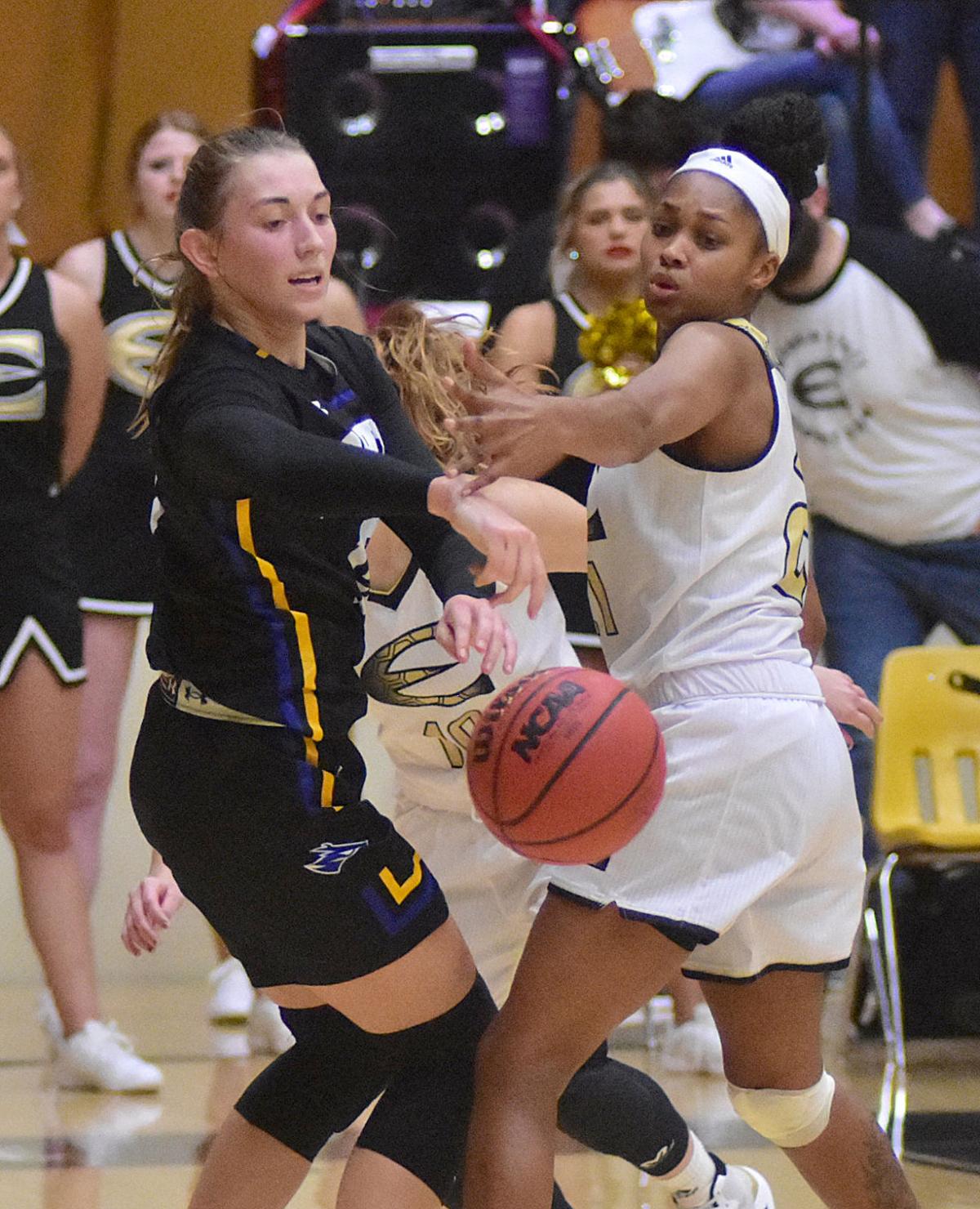 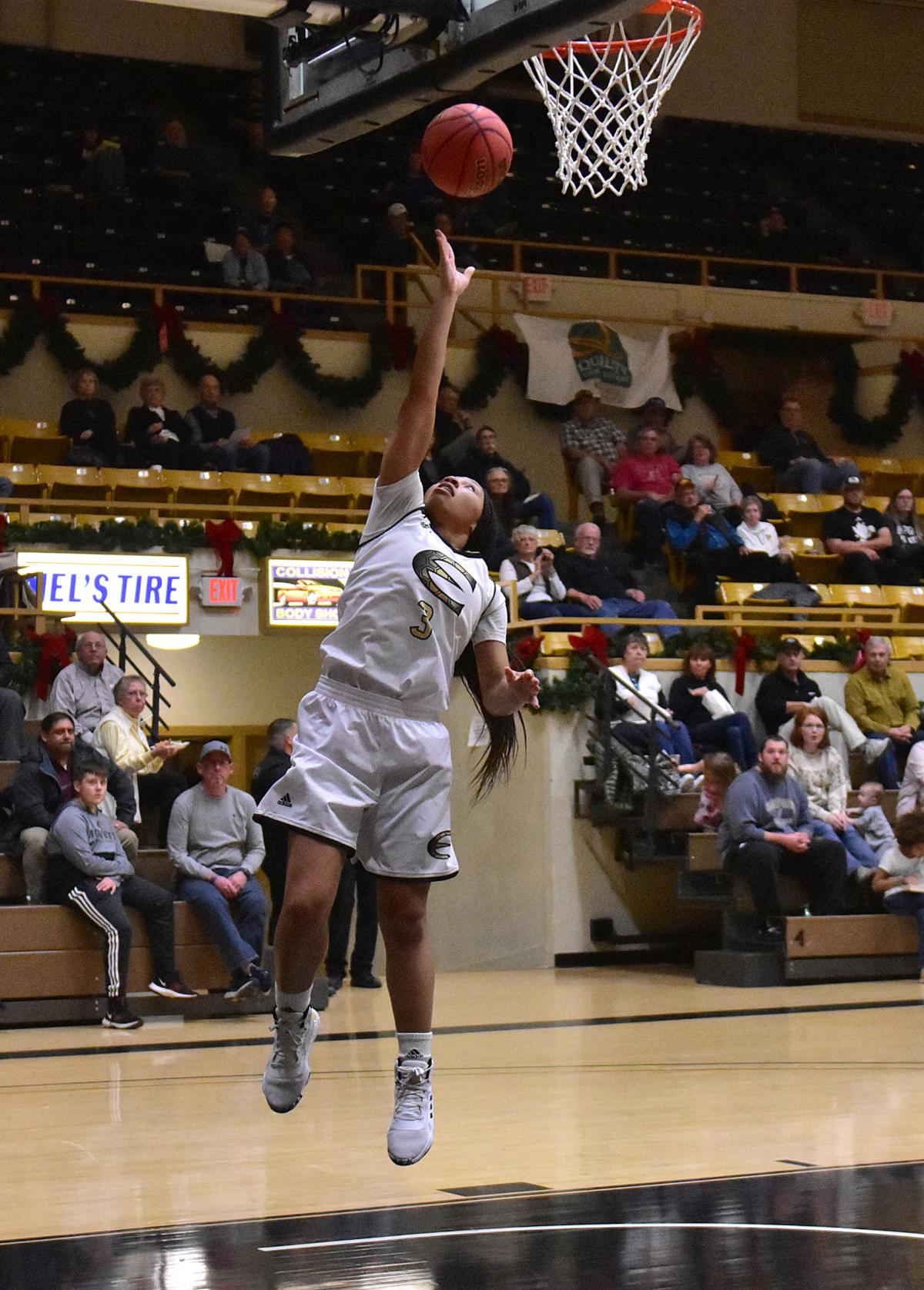 Tre’Zure Jobe (3) shoots an uncontested layup during the second half of the Lady Hornets’ 70-49 victory over Nebraska-Kearney on Thursday night. ESU scored 39 points off turnovers against the Lopers, getting 23 steals in the game.

The ESU bench reacts to a 3-pointer from Jessica Wayne that beat the halftime horn. The Lady Hornets carried a 37-26 lead into the break.

ESU senior Mollie Mounsey (22) was 2-for-7 from long range, scoring nine points for the Lady Hornets in a 70-49 victory over Nebraska-Kearney on Thursday.

Karsen Schultz (25) drives to the basket during the Lady Hornets' victory over Nebraska-Kearney on Thursday.

Tre’Zure Jobe (3) shoots an uncontested layup during the second half of the Lady Hornets’ 70-49 victory over Nebraska-Kearney on Thursday night. ESU scored 39 points off turnovers against the Lopers, getting 23 steals in the game.

There was no surprise on Thursday in regards to how Emporia State stole a victory over Nebraska-Kearney at White Auditorium.

How frequently the Lady Hornets were able to work their defensive thievery? Well, that stunned head coach Toby Wynn ever so slightly. In ESU’s MIAA opener, the Lady Hornets got 23 steals and scored 39 points off turnovers in a 70-49 victory over Nebraska-Kearney, handing the Lopers their first loss of the year.

“We didn’t know if we were capable of doing that in conference play, the way we had been doing it, the level we had,” he said. “These are numbers you just don’t see a whole lot when it comes to the turnovers ... but you have to give credit to your players. They’re the ones that are believing in what we’re doing defensively and you’ve got to have them believe in it. Once they ... see the result of it, then it kind of forces them to want to play harder at it and do better at it.”

ESU trailed by as many as five in the first quarter, but four turnovers helped hand the Lady Hornets an eight-point advantage before play moved into the second.

“I thought our players came out and started the game with the right kind of mentality for us,” Wynn said. “We wanted to ... set the tone early with our pressure and our defense. I thought we were able to do that. We got the pace going at the level we wanted it to and we were able to force some turnovers and get some easy buckets because of that. We didn’t want them to ... be able to set into their main offense and be able to pick us apart. We wanted to try to speed them up and make them have to play a faster level than they (wanted).

“Our players did that from start to finish.”

Jessica Wayne buried a 3-pointer at the halftime buzzer to boost the Lady Hornets to a double-digit lead heading into the break and the Lopers were unable to get any closer than eight in the third quarter. In the final period, ESU took its lead up to 20.

“The most aggressive team wins,” said freshman guard Tre’Zure Jobe, who had a team-high 18 points. “We have to force the tempo.”

That highly-accelerated pace kept ESU in front, even when the Lady Hornets went through an adverse stretch during the second half where calls and rebounds didn’t go in their favor. ESU still made enough baskets and/or stops to remain in the drivers’ seat. That served the Lady Hornets well as they handed Nebraska-Kearney its first loss of the season. That came just a few short days after the Lopers had done the same thing to Fort Hays State, predicted to finish atop the conference. The Tigers had a 12-point fourth-quarter lead over UNK earlier this week only to watch the Lopers steal a victory of their own.

“I thought our team was relentless,” Wynn said. “We told them at halftime this game was going to come down to us being physically tough. We had to battle for rebounds and our defense had to remain active. We couldn’t get stagnant, we couldn’t let them settle into any kind of offensive groove. They just came back from 12 points down with eight minutes to go in the fourth quarter against Hays Tuesday so we knew they’re a very capable team of overcoming some big numbers there.”

At the end of the day, seven different players on the Lady Hornet roster had steals and while Jobe, Wayne and Mounsey had a majority of them, there were still some vital turnovers in the backcourt.

“I give all the credit to those top girls on the zone,” senior forward Morgan Laudan said. “They are crazy pressurers and that just changed the whole game. When they’re pressuring, the other team’s going to throw some bad passes and then we get some steals too.”

At the end of the night, Nebraska-Kearney turned the ball over 31 times under the ESU pressure.

“That’s what we work on in practice,” Jobe said. “We have to take pride in our defense.”

“We know we have a short turnaround, a short time to prep,” Wynn said. “But I think our players will be prepared and ready for (Hays).”