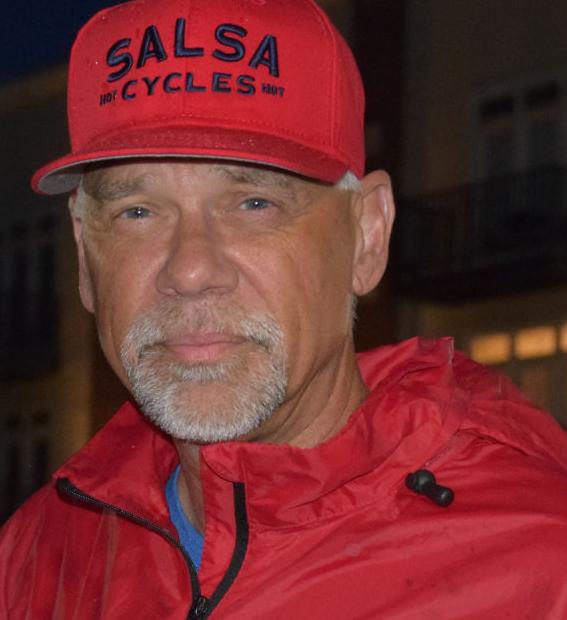 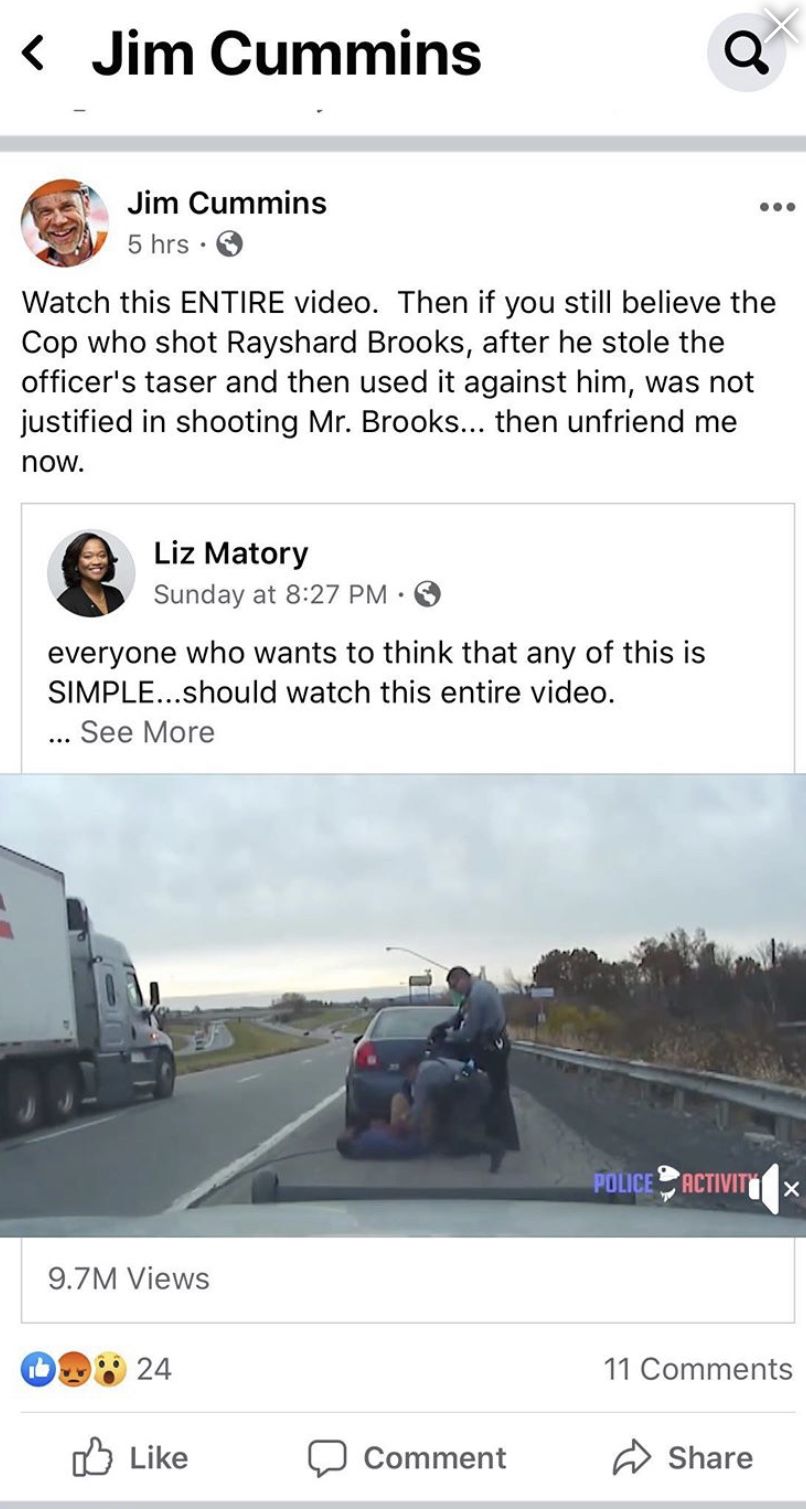 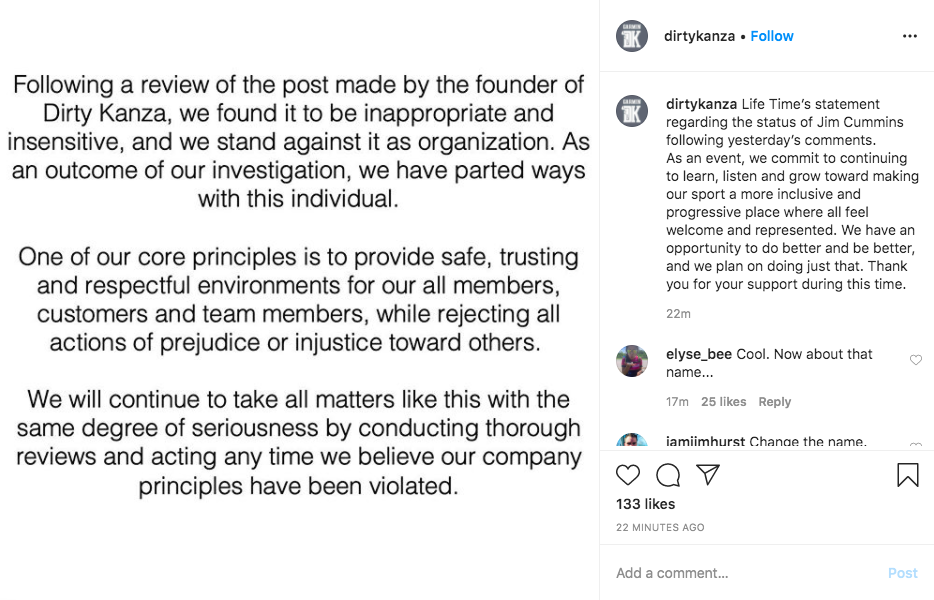 Dirty Kanza Founder Jim Cummins was fired by the race's parent company Life Time Fitness following a post Cummins made on his person Facebook page describing the shooting of Rayshard Brooks as "justified."

The story broke Saturday after CyclingTips obtained emails from Life Time senior staff showing that "Cummins was the subject of a 'thorough investigation' within the company and that Cummins was been placed on leave until the culmination of this investigation."

On Friday, Cummins made a post to his personal Facebook page asking his followers to watch a video in which two police officers attempt to apprehend Daniel Clary, a black man who shot an officer during a 2018 arrest in Pennsylvania. Clary was later convicted and sentenced to 110 years in prison. The officer survived.

"Watch the ENTIRE video," Cummins said in the post. "Then if you still believe the Cop you shot Rayshard Brooks, after he stole the officer's taser and then used it against him, was not justified in shooting Mr. Brooks... then unfriend me now."

Brooks, a 27-year-old black man from Atlanta, was killed June 12 after he tried to flee from two white police officers after fell asleep inside his car outside a Wendy's restaurant. He was reportedly inebriated and took a taser from one of the officers. Brooks then fired the taser in the direction of one of the officers, but did not make contact.

Brooks was shot in the back as he tried to run from the scene. His death has been ruled a homicide.

Kimo Seymour, president of Life Time's events and media division, confirmed that Cummins had been terminated and told The Emporia Gazette Sunday morning that it was a "mutual decision to part ways."

"We wish nothing but for the best for Jim," Seymour said. "He was very understanding and it was a mutual decision to part ways."

Seymour said he did not believe Life Time had a specific policy regarding employees activities on personal social media pages. However, the company wanted to "uphold certain principles and values."

"We are careful about how to manage these situations and if an employee expresses a value that we think doesn't align with our principles and values," he said. "We think this event does stand for diversity and inclusion. ... We believe we need to take more positive action toward diversity. Cycling in general needs that."

Seymour said he believes the DK can be a leading event in that area. In recent years, DK Marketing Manager Kristi Mohn, along with Operations Manager LeLan Dains and Athlete Services Manager Treva Worrel, has lead an effort to bring in more women to the race. The lottery for the 2020 race was the largest on record, Seymour said.

"We would love to be leaders in that area," he said. "We have a phenomenal team there in Emporia with LeLan, Kristi and Treva. Our company has been fairly successful in getting involved in events that support the community. That’s one of the unique things with Emporia and the Dirty Kanza — it's just such an amazing community event. We have an amazing team that comes together. We hope the event will continue to thrive."

Editor's note: This article has been updated to include a more accurate rundown of the circumstances surrounding the death of Rayshard Brooks.

Let’s try this again since the Gazette diligently censors our comments.

This man did nothing wrong .

The police were justified ,... watch the video in it’s entirety.

Life Time must have been looking for a reason to fire him.

Also,... George Floyd was a common Criminal that was murdered by another Criminal masquerading as a police officer.

What if I support black lives matter but also think the Brooks shooting was justified? Trump has done such an excellent job dividing our country there's no room left for reasonable people in the middle. He has the "you're either with us or against us" attitude...

Thankfully Trump has lost a good portion of his base. When Trump claims a million people wanting to attend his rally and less than 6,200 show up, you know he's a one term loser. As much as I dislike Biden I don't see him painting Republicans with a broad brush like Trump does Democrats, and think he can at least start healing this country. Another 4 years of Trump is 4 more years of blatant racism. We don't need that.

Unfortunately free speech seems to apply to some but not all of us. The people of this country seem to be determined to rewrite history.

Emporia the DK is dead. Seize this opportunity to sponsor your own race without this corporate nonsense. Name it what you will but I think everyone, even the critics, realizes that Dirty Kanza is not meant as a racial slur in any way.

Pretty hypocritical when you consider the name Dirty Kanza is considered derogatory slang towards the Kansa or Kaw Indians that used to live here and were relocated to Ponca City, OK. When I first moved back here in 2017, I called the DK and specifically asked them to change their name. They understood that the name Dirt Kanza was considered demeaning but they had invested a "lot of money" branding the name and so they would not change it. Maybe now would be a good time to address that issue again.

Have a happy Father’s Day ....... wonder just wonder what the outcomes would have been if the illegitimate birth rate would have been at a MUCH lower rate . Something to ponder 🤔HAPPY FATHERs DAY !!!!!!

Happy Father’s Day. Fathers have had such a positive impact on American Values from our founding. Guess since we have marginalized the value of fathers for the past 50 years we should be surprised at what our country has evolved into !

The police shot him because he was still pointing the taser gun at them and was perfectly able to disarm an officer. The officers had to defend themselves. GOD!

I bet he wishes now, that he never sold the rights to Dirty Kanza. But, in these times, people in his position have to think twice before they speak, even tho we're suppose to have freedom of speech. He's worked his butt off to bring that event to Emporia and help our economy. I hope this doesn't have a negative effect on the event.

It’s a sad day for Jim who by founding the DK did so much for Emporia’s economy and stature. I believe he had a right to defend the police but Life Time has the right to its principles too. So many actions today are divisive. I wish we could’ve kept local control of the DK and not sold it out.