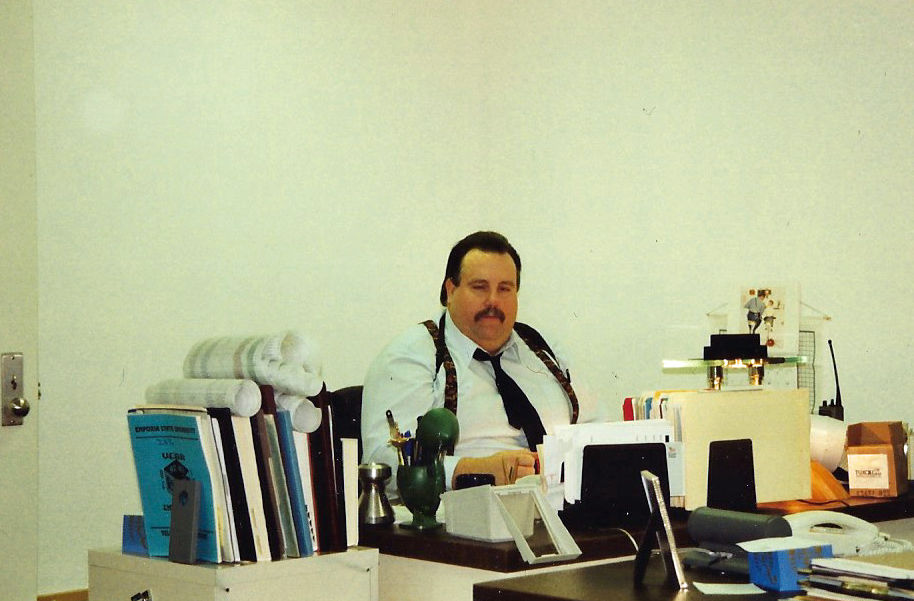 After being told by a supervisor to clean up his work space, Ron Davis did just that. 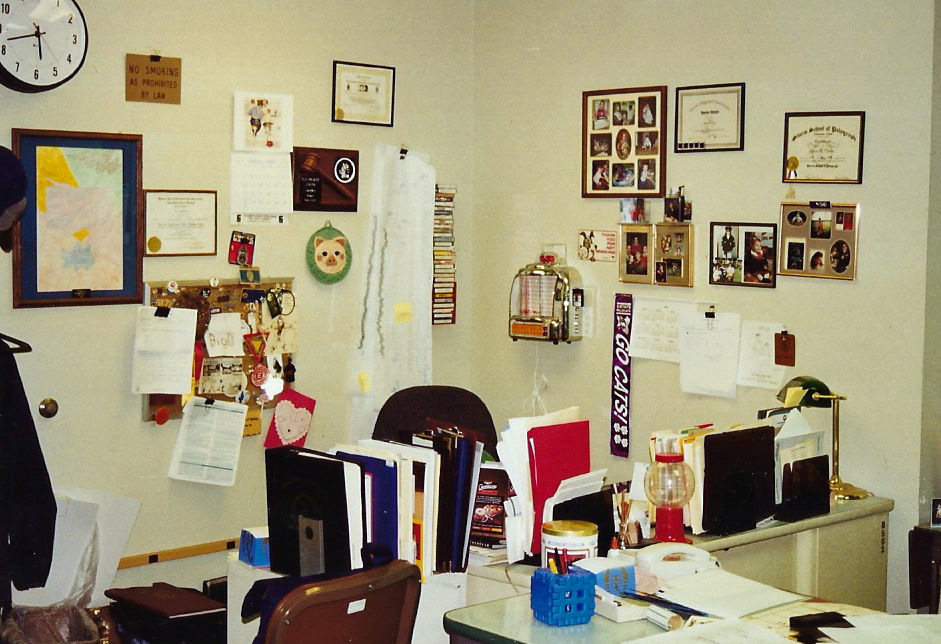 Ron Davis was a family man and liked to keep reminders of his family near him at work. 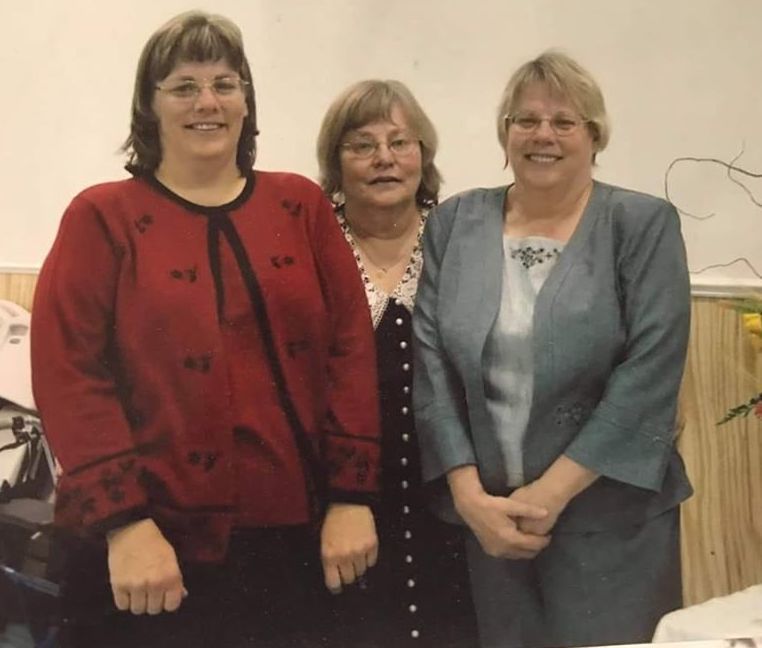 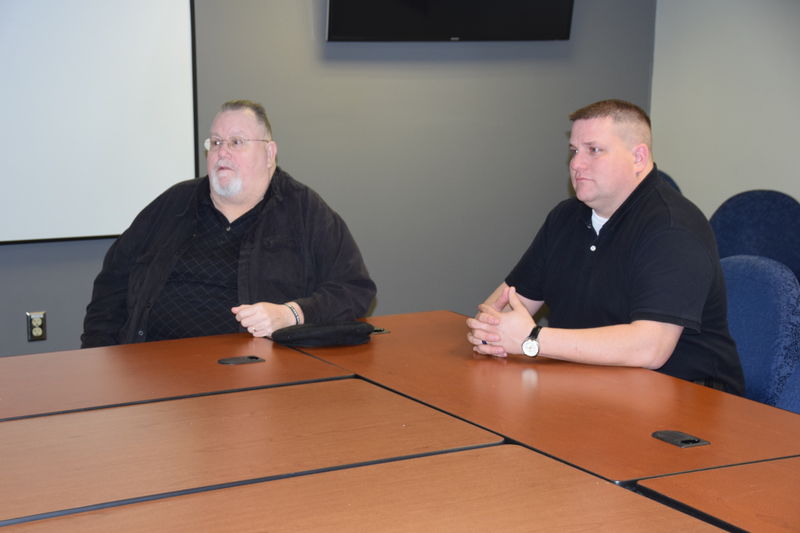 From left, Ron Davis and his son, Kelly Davis, both officers for the Emporia Police Department, share stories of their time serving the community. 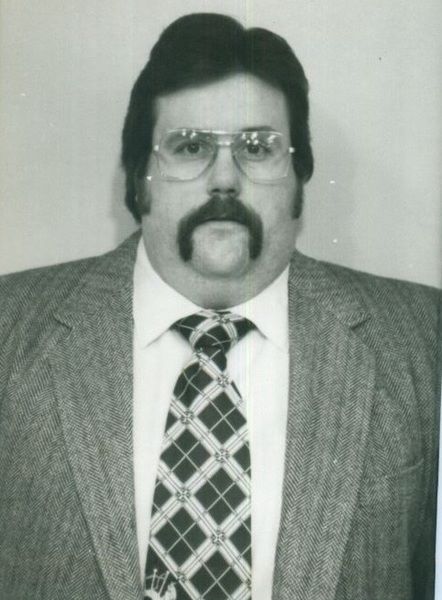 After being told by a supervisor to clean up his work space, Ron Davis did just that.

Ron Davis was a family man and liked to keep reminders of his family near him at work.

From left, Ron Davis and his son, Kelly Davis, both officers for the Emporia Police Department, share stories of their time serving the community.

James R. (Ron, or “Big O”) Davis died on Sunday, July 5, in his home, only two days after the funeral for his wife Susie.

Both services were led by their eldest son, James, pastor of the Pleasant Hill Church of the Nazarene in Sylvia, Ks.

“My mom and dad were a matched set, and he wanted to spend all of his time with my mom,” said middle son Kelly Davis of Emporia. “… He just didn’t want to live without her.”

Ron Davis had met Susie Penner at the old Red X Pharmacy, where she worked part-time; he had a job at Jensen’s full-service gas station. They married in September 1968, after she graduated from high school.

Early in 1969, EPD hired Davis as a patrol officer. By the end of his first shift on the job, Davis was irrevocably hooked on a career in law enforcement. For Susie Davis, the day was memorable, but in a different way.

Ron Davis had stepped from the patrol car after his first eight hours, and exclaimed, “Wow, that was great,” Kelly Davis said, retelling a favorite family story.

Asked whether he wanted to stay on for another shift, Ron Davis readily agreed. He retained that enthusiasm at the end of Shift 2, too, and stayed on for a third.

“He stayed the entire 24 hours before he went home,” Kelly Davis said.

Meanwhile, Susie Davis remained unaware of the change in plans.

“When he got home, his bride was crying because he had not been able to call to tell her he was still working. No cell phones in 1969,” James Davis said, paraphrasing his mother: “’I thought you went to work as a police officer and got killed the very first day.’”

Davis stayed on in the Patrol Division for several years until a position in Investigations opened.

Then-Lieut. Larry Blomenkamp had noticed the young officer’s meticulous approach to his work and had encouraged him to apply for a detective position.

“I thought he would do a good job and he lived up to my expectations, that’s for sure,” said Blomenkamp, who later became Chief at EPD. “His reputation in the law enforcement community speaks for itself. He did a good job.”

Davis added to his investigative skills by becoming certified in polygraphy, and became the department’s first polygrapher. He also became nationally certified as a forensic fingerprint expert.

Davis also became known within the community as a specialist in financial crimes, particularly in forgeries.

“He was a bulldog on investigations and he was the financial investigator,” said retired Lieut. Larry Adams, Davis’ partner for 10 or 12 years. “He was the man when it came to frauds and forgeries and any kind of embezzlements, that type of stuff.”

Bankers came to rely on Davis’ expertise, and seemed disappointed when other investigators were sent to their offices if Davis was tied up with other cases.

Davis, though, had shepherded Adams and others through the processes involved in investigating a spectrum of serious crimes, financial and otherwise.

Retired Det. Sgt. Mark Schondelmaier said that Davis had been a fatherly figure to the younger officers.

“He kind of put us under his wing and showed us the ropes, how it should be done,” Schondelmaier said. “He was always very ethical.”

But, as often is the case with police officers, a prankster lurked beneath the seasoned Davis’ often-serious demeanor.

Schondelmaier recounted dispatchers’ ongoing complaints that officers were lax about picking up after themselves when they used the one copy machine shared by everyone in the department.

“One morning, (Davis) completely set it up – (he left) what looked like a property receipt, and had a urine specimen cup sitting on the machine,” Schondelmaier said.

Dispatch soon called to complain about the cup.

“Ron goes in, picks it up, and looks at it,” Schondelmaier said. “It looks like urine; he kinda smells it. And then he tasted it. … It about freaked everybody out.”

Davis had poured apple juice into the specimen cup because “there’s no limit to what you can go to, to play a trick on somebody,” Schondelmaier said. “He made work fun. He was a good influence.”

Occasionally, the tendency to play pranks backfired. As detectives rode the courthouse elevator up to County Attorney Rod Symmonds’ office for their weekly meeting, the elevator stopped, stuck between floors.

“We hollered out for help, but nobody would believe us, because it was detectives and we were always joking around,” Schondelmaier said, “and also, it was April 1st.”

Schondelmaier gave credit to Davis for his willingness to accept adapt to new methods and equipment.

“Some officers kind of resist change,” he said. “Ron wasn’t like that. … If there was justification of using something, a different technique, I think he was always willing to give it a try.”

Retired records clerk Karen McNeese said, “I had all the respect in the world for Ron. I thought he was very good at his job” as well as helpful to the community.

She later married Bob McNeese, one of Davis’ friends from the Patrol Division. The couples began socializing together and the women bonded, too.

McNeese reminisced about a stroke of serendipity involving a two-and-a-half-story brick home that Susie Davis had admired when she and Ron went for walks on State Street. The name “Davis” was written on the mailbox.

“Susie would say, ‘Just think, Ron, if we had this house, we wouldn’t have to change the name on the mailbox,” McNeese said. “Then one day, they got it.”

The couple reared their three sons there, welcomed spouses and grandchildren into the fold, and settled into full retirement after decades of work.

Susie Davis had been an accountant for Butcher-Peterson, but had put her career on pause for a few years after each son’s birth, and returned to the work force when she felt the boys were ready. After the birth of youngest son Andrew, she worked at Hastco, where she stayed until retirement.

Ron Davis had retired from EPD on Leap Day, Feb. 29, 2000. Still, he remained connected to his first career when he opened Davis & Associates Polygraph, Inc., performing lie-detector tests for law enforcement and private industry. He also was a licensed private investigator.

But for all that Ron Davis enjoyed police work, his priority was his wife and sons. James and Kelly reminisced this week about growing up in the Davis household.

Meals, preceded by prayers of thanks, were eaten together whenever possible, and Sundays were devoted strictly to family activities, beginning with church.

“If the church doors were open, we were there,” James said. “If there was a place to serve, they were there.”

His parents were ushers, Sunday school teachers, and members of a variety of committees at First United Methodist Church. The boys attended both Sunday school and church, and participated in vacation Bible school classes, children’s choir, handbell choir, and almost everything the church offered for youngsters.

Fishing excursions were frequent and vacations, though frugal, were major adventures undertaken in a 1976 Econoline van. They traveled to Washington, D.C., down the East Coast to Florida, Yellowstone Park, Washington state, Louisiana, and Colorado, and more, staying with friends along the way, Kelly said.

During pheasant season, they joined friends in western Kansas for opening weekend; when quail season arrived, the Davises would host those same friends for quail hunting.

“They gave up fancy vacations and new cars to put a pool in the back yard for us boys,” James Davis said.

And they instilled the boys with confidence and encouraged them to work toward whatever careers they wanted. James chose the ministry; Andrew chose music and manages Manning Music in Topeka; Kelly, despite advice to the contrary, chose to follow his father’s path.

“My dad said, ‘Son, you can do anything in this world. Just whatever you do, don’t become a cop.’” Kelly Davis said. “It’s like telling a kid not to get into the cookie jar.”

Because of the city’s nepotism policy, father and son could not be employed simultaneously at EPD. Kelly Davis considered going to Colorado Springs to become an officer, and in 2000 was about to make the move, until his father suggested an alternative.

“My dad retired from a job he loved, so that I would stay in Emporia with them,” Kelly Davis said. He started work at EPD on April 23, 2000, “so Emporia has only had seven weeks in 51 years without a Davis working at EPD.”

In 2006, with Kelly Davis taking unpaid leave from the City, Ron Davis paid all expenses for his son to go to Pennsylvania for 14 weeks of training to become certified in polygraphy. On his return, he joined his father as part of Davis and Associates Polygraph Inc., and added the responsibility of polygrapher to his job at the police department.

Now, in 2020, the reassuring balance among the parents, adult children, and grandchildren has disappeared in an upheaval that began insidiously and ended abruptly.

In the blink of an eye

Susie Davis had called a doctor several months ago about pain she was experiencing, and had been advised not to come to the office because of the COVID-19 virus.

“Another few weeks went by. Mom was kind of dragging herself around the house with two canes,” Kelly Davis said.

After multiple falls within a matter of days, family members convinced her to go to the doctor. On June 9, tests revealed cancer and she was admitted to the hospital. The cancer had invaded both lungs, pancreas, ribs, vertebrae, brain and breasts.

“There’s nothing to do,” Kelly Davis said; “it was such a roller coaster. Ninety days would be optimistic” they were told. “Maybe weeks or months. Within a week they said, ‘You have hours or days.’”

She came home from the hospital on June 24. The family set up her hospital bed in the living room, close to Ron Davis’ chair so the couple could hold hands and share the time remaining. She died on June 30.

“Dad died with Mom,” Kelly Davis said. “He just hung around long enough to get her put in the ground properly. He told us all he loved us. … He had to go be with Mom.”

"My mom and dad were a matched set, and he wanted to spend all of his time with my mom ... He just didn’t want to live without her."

WOW, what an excellent tribute story of a wonderful human being.