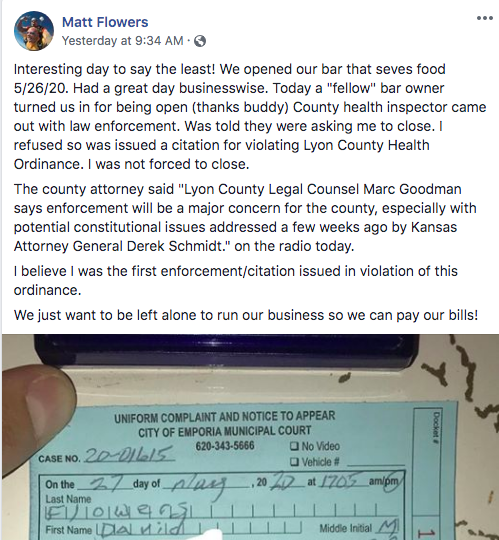 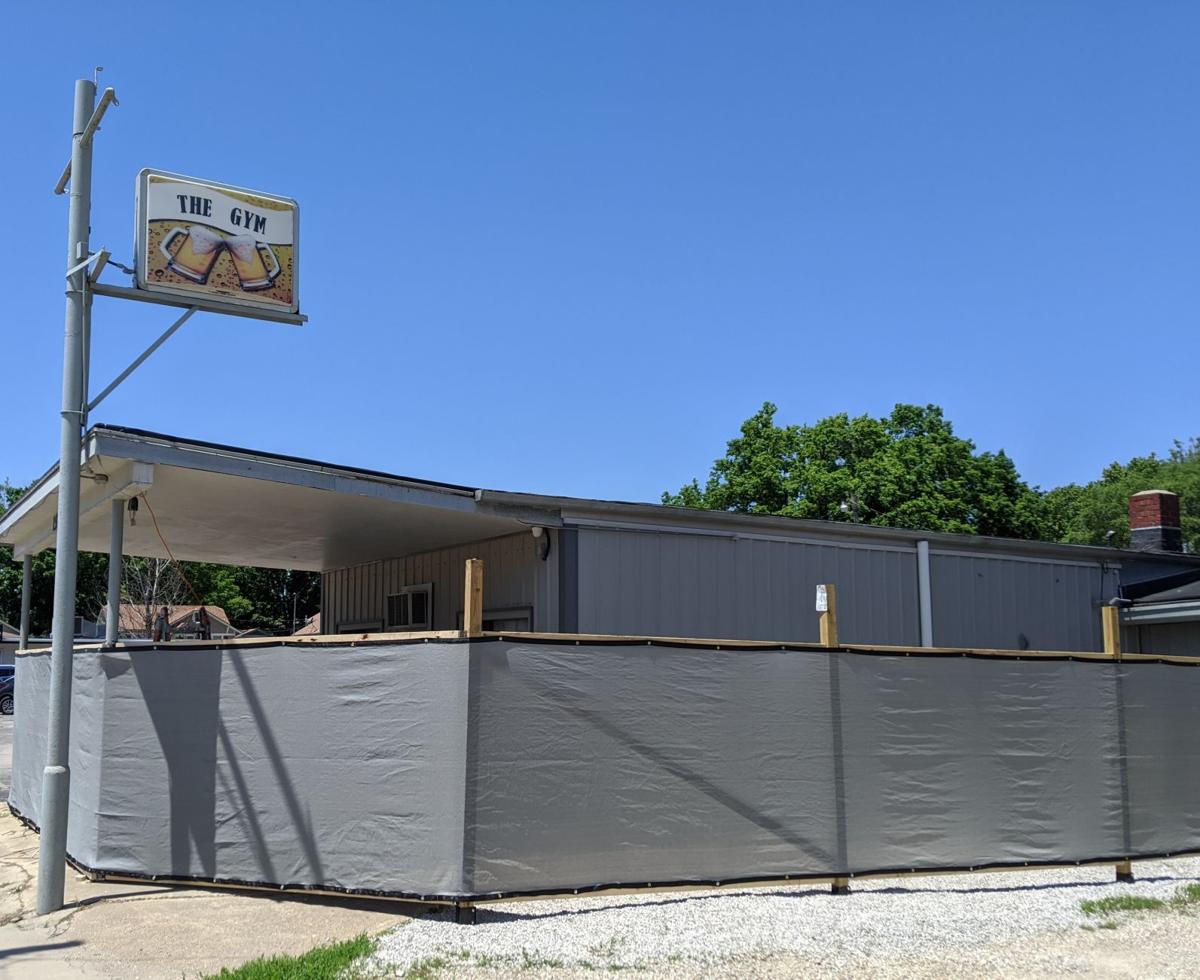 An Emporia bar became the first local establishment to be issued a citation for violation of the county’s public health order this week.

In a post to his personal Facebook page Thursday, Matt Flowers, owner of The Gym bar located at 1516 W. 6th Ave, retold his experience. According to Flowers, much of the issue surrounded his choice to begin serving food, something which The Gym had done in the past. The decision to do so, he said, was simply a matter of necessity.

“Food was an avenue for me to be able to open back up,” Flowers said. “I felt like I had the proper food license, but here we are. The county health department sent people out, and one of the ladies asked me if I had had dine-in seating previously. I told them ‘yes’, and as I understood it, they were going to send someone else out to see what my food sales were. When they came out, they didn’t really inspect anything, they just asked me if they could speak to me. She basically said, ‘At this time we’re going to have to ask you to close. I asked them what would happen if I didn’t, and was told the city would issue me a citation. So, that’s where I’m at right now.”

If enforced, Flowers could be fined as much as $500 for the violation. Still, he said he harbors no resentment toward local health officials or law enforcement, being more interested in getting to the bottom of the situation than causing controversy.

“I don’t know if they can ultimately force me to close up again, and I really don’t want to get to that point,” Flowers said. “I’m not mad at any of the people involved, though. They’re just doing their jobs, and everyone that came out that day was very cool and professional towards me … But, I went about 70 days with absolutely zero income. This is my livelihood. I think I’ve filed 10 weeks worth of pandemic unemployment, and I’m self-employed, so I still haven’t received a single dime of that. I’ll get it when they get around to it I guess, but that’s a big 'when.'”

The Gym remains open for regular hours during this time, and Flowers is currently set to appeal the matter in court in early July, barring any changes. The Gazette will continue to provide updates to this situation as it develops.

“I’m not looking at this situation as some sort of big radical trying to make all these changes or reopen everything up before it needs to,” Flowers said. “I’m not a defiant person. It just upsets me to know this establishment has never been an issue for the city before, but now we have this situation ...I believe we have the same food and drink licenses as the bowling alley, and they’re currently open. So really, it’s just going to be a matter of getting down to the bottom of this and figuring out what all the laws and regulations actually say and cover.”

Per modified Phase 2: "Under Phase 2, the following, unless they are repurposed for use in an essential function under the Kansas Essential Function Framework, shall remain closed to the public:" Per what I read, that is exactly what was done by serving food. I think the powers of a Public Health Officer needs to be reviewed. I was surprised that such actions don't have to go through Kansas Department of Health and Environment as more expert input really seems necessary. Also, please review the issues with wearing a mask as it could be detrimental to some with health issues, also does not protect the wearer but those around them to some degree as the sides generally leak during a sneeze or cough of someone infected, and even the N93 (I think that is the right number) is only 93% effective, so imagine how effective some of the others are - all of this information is available on the internet.

I think we should quit running scared, open everything back up and go back to work. We're libel to be fighting this for six months or more with all this social distancing bull. All that's been done is delay the course of what ever kind of flu this is, scared people to death, ruined the economy, and taught people that it they hold out their hand they can make more staying home than going to work.

Here is what should have been done. Closed all the businesses and plants in town, and seal everyone in their homes until the virus has been totally eradicated from the planet.

So this guy hasn't gotten any of the pandemic assistance from the portion of the part of CARES Act? The guy who didn't pay into the unemployment fund? The one who gets all the income and profits however large they could possibly end up if his place is one that attracts people to buy at whatever markup he wants? Not trying to be an ass but complaining about something you MIGHT get at some point in the next month or so is falling on the ears of someone who waited a month and a half for 3 weeks of unemployment and then again for the 600 x3 from the cares act and found wanting. This is the EXACT situation they did the PPP for. He could have gotten paychecks for himself and his employees for 2 months that he wouldn't have to pay out the principle for if he spent 75% of it only on payroll (I'm assuming he has somebody working for him too and didn't fire everyone in a heart beat when they shut down the state.) But instead he wants to jump in and get his share of whatever bar business there is (none) because why? Business owners don't pay into unemployment for themselves, they stand to lose everything at any moment for unforeseen circumstances and it's an incredibly high risk. But if their biz succeeds then they get all the windfall minus income taxes. And now he's signing us up as a community because he can't play nice with others, again at not much cost to him.

Best of luck! I do hope there is a follow-up story to let us know how this turns out, and that the owner does not have to pay a fine. Understanding the differences with some of the businesses and decisions made would be helpful. For all the "orders", Lyon County still hasn't did that well compared to counties without such draconian orders. I do hope that the Attorney General has been made aware of this issue. I expect with the Governor turning the wheel over to the County Public Health Officers, that some may, like the Governor, overstep their powers in limiting our freedoms.