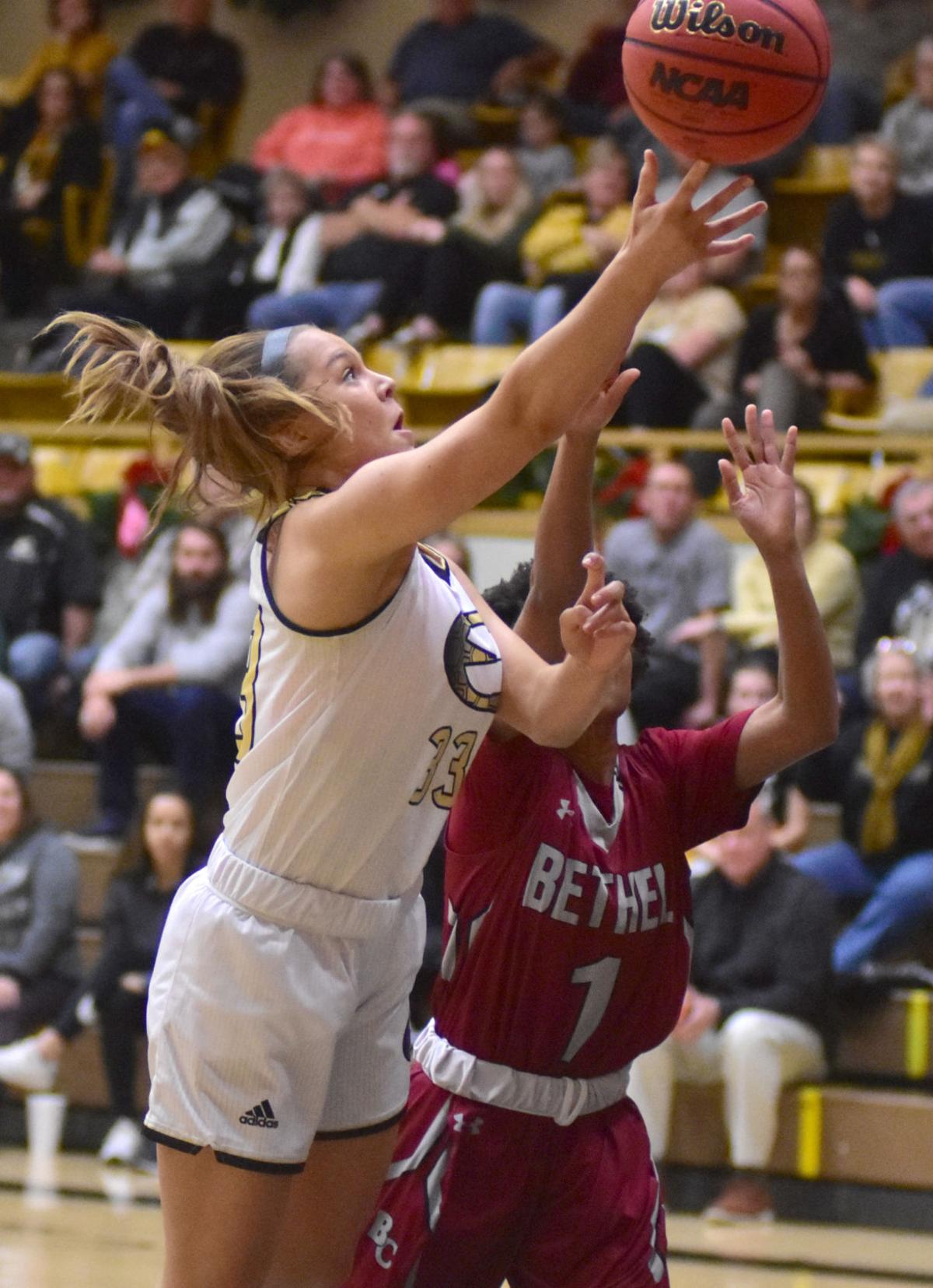 ESU freshman Grace Gordon reaches around a Bethel defender for a shot on Monday night. 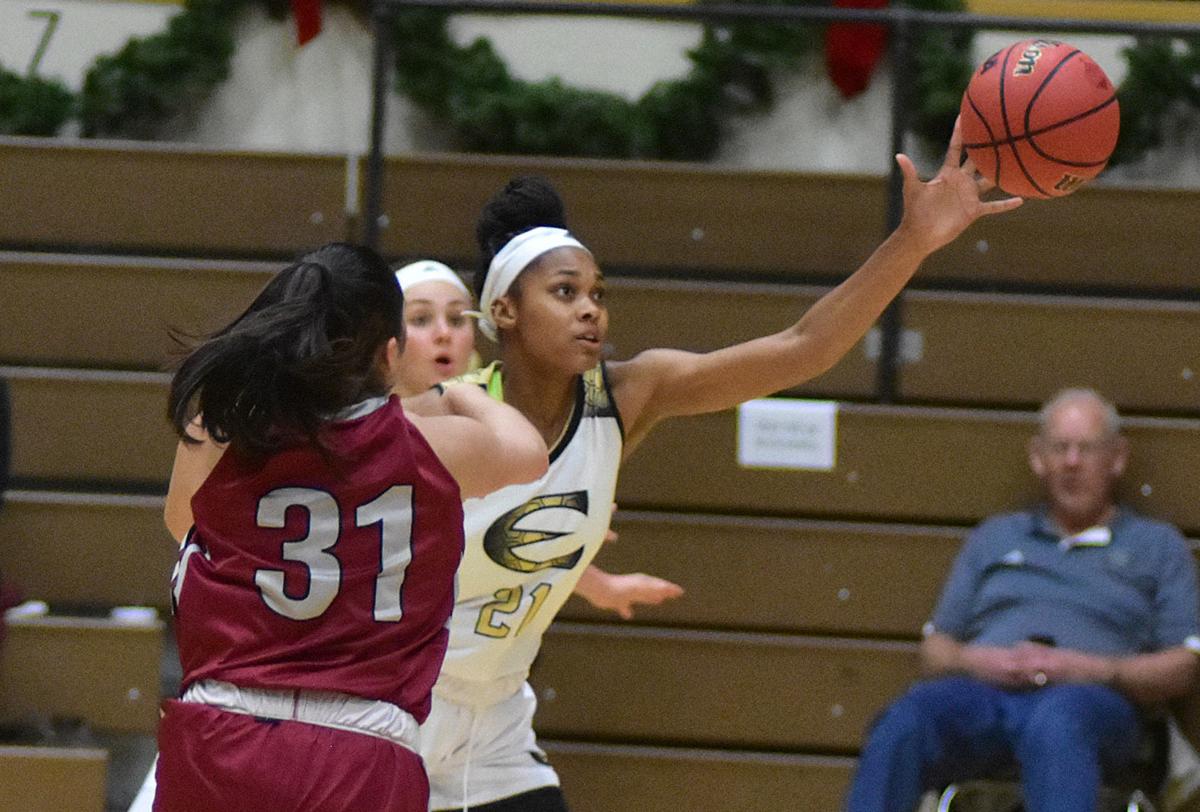 Emporia State senior Jessica Wayne had eight of the Lady Hornets' 28 steals against Bethel on Monday night in a 112-42 victory. 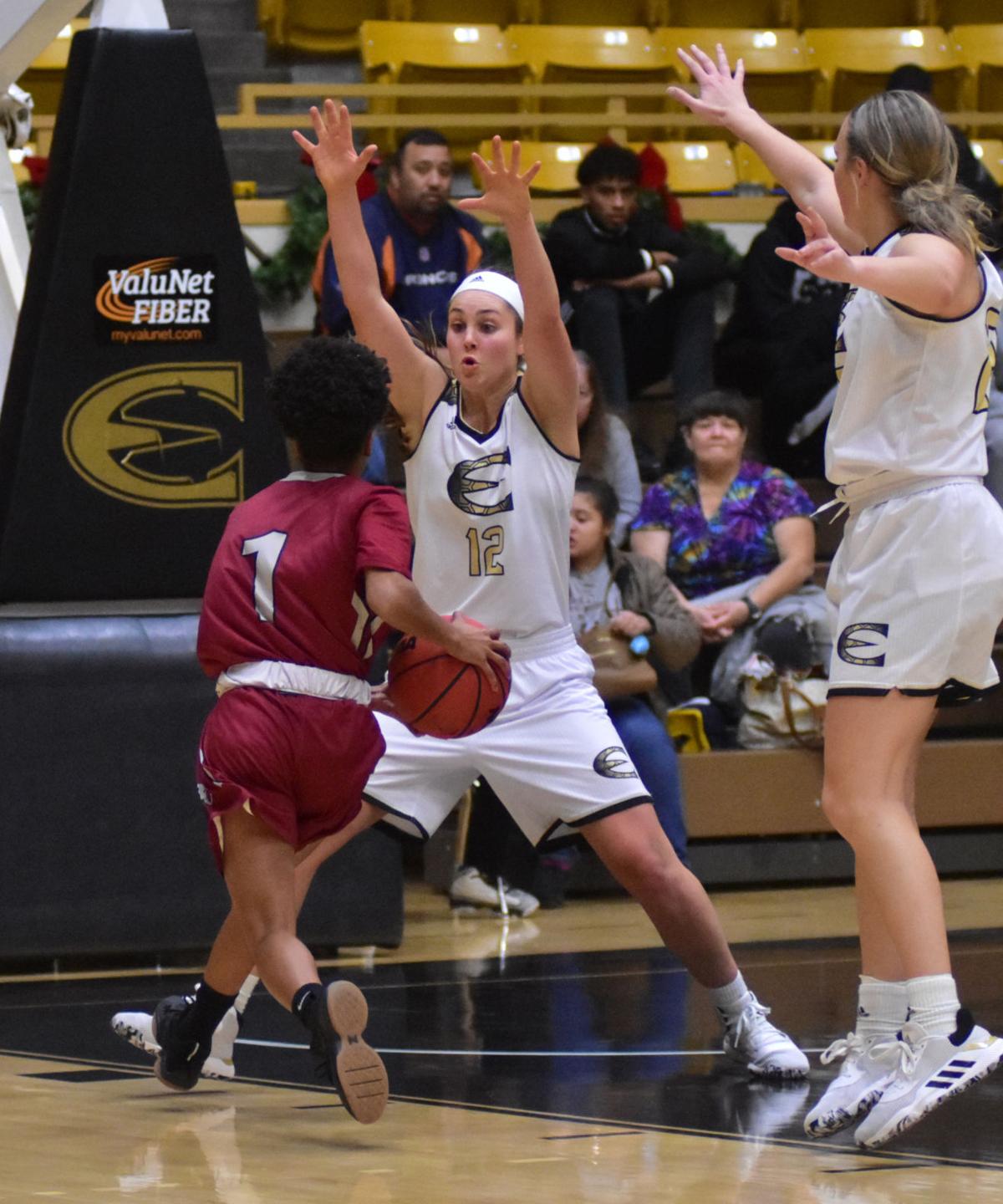 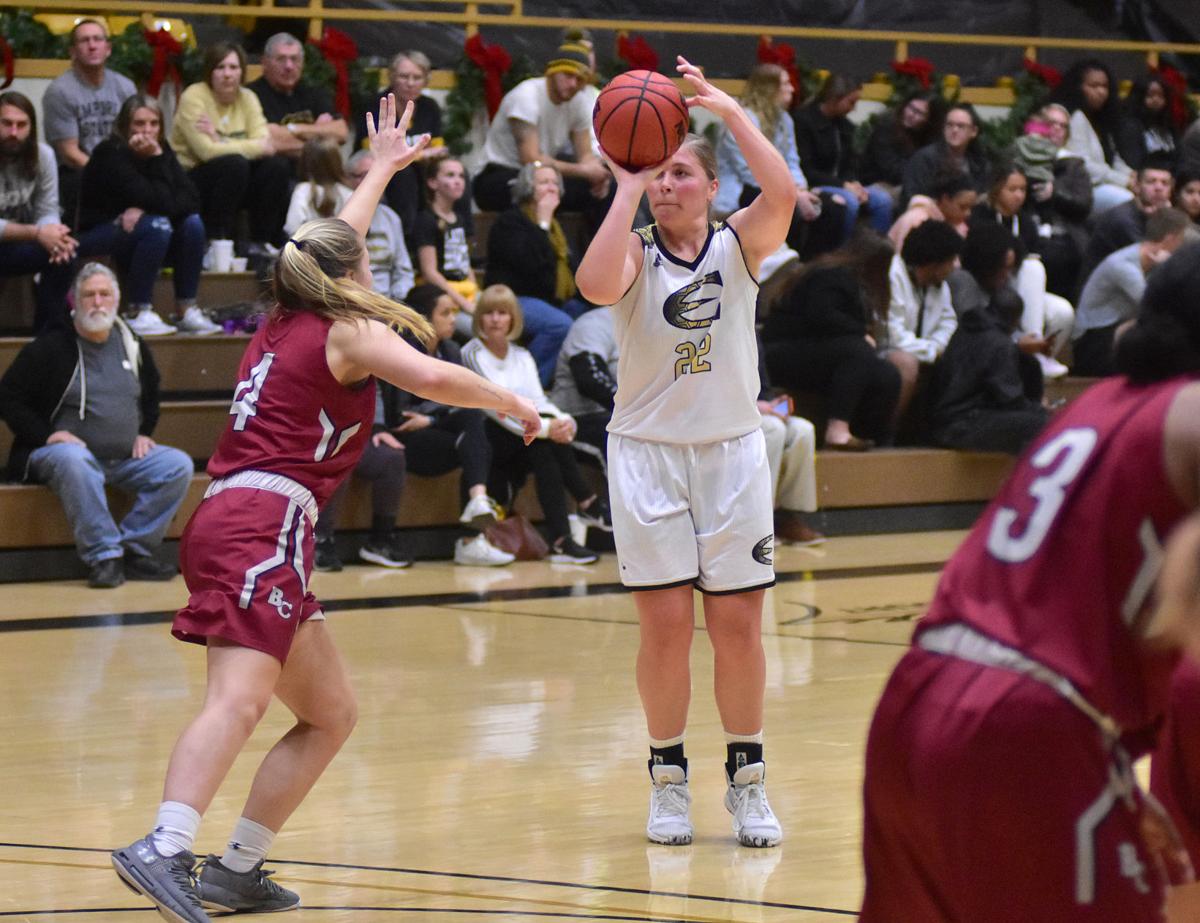 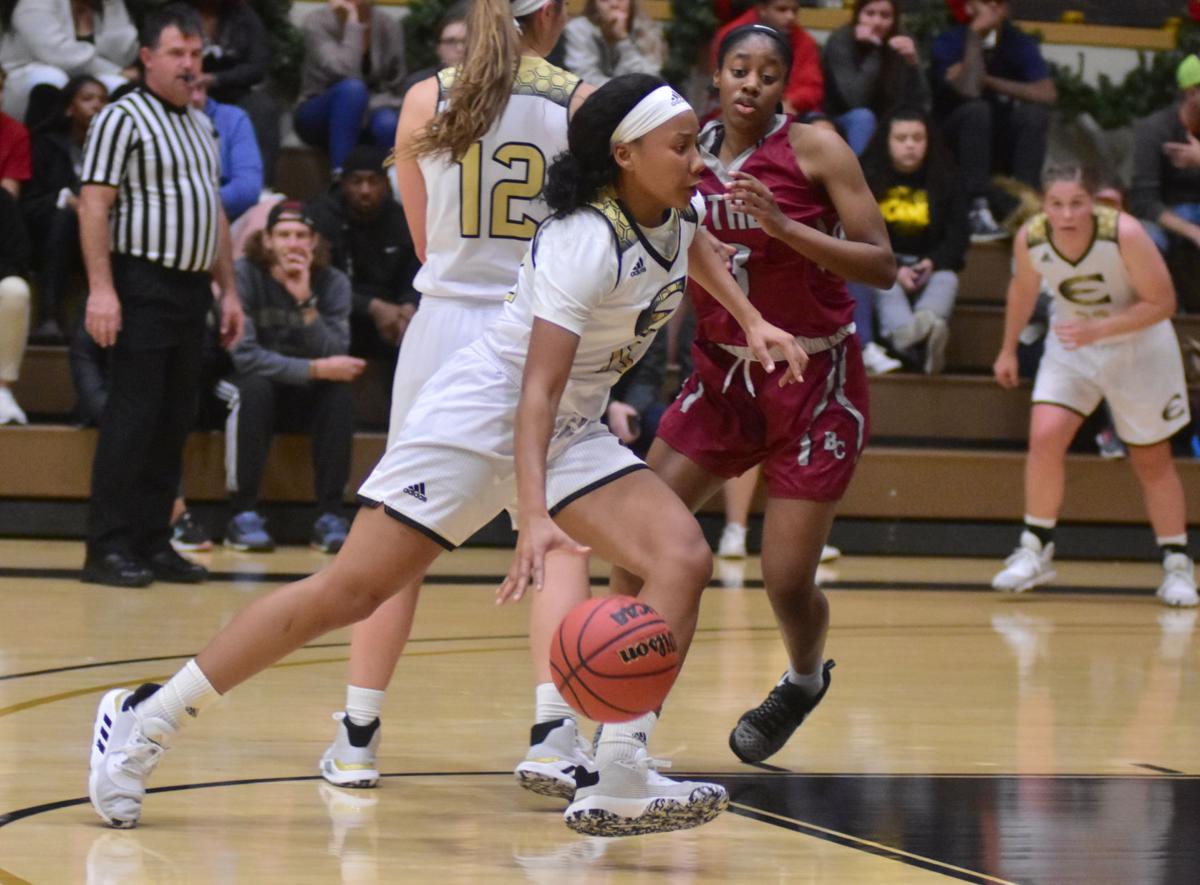 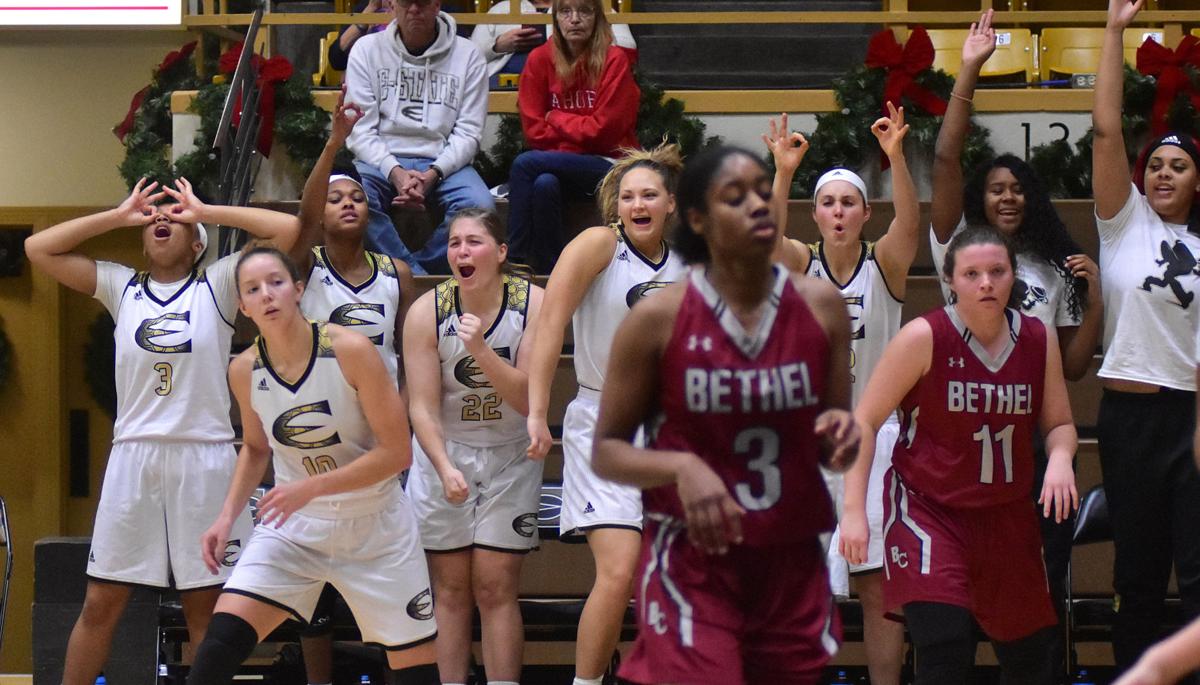 The Emporia State bench reacts to a 3-pointer from Kali Martin (10) during the second half of Monday night's game. 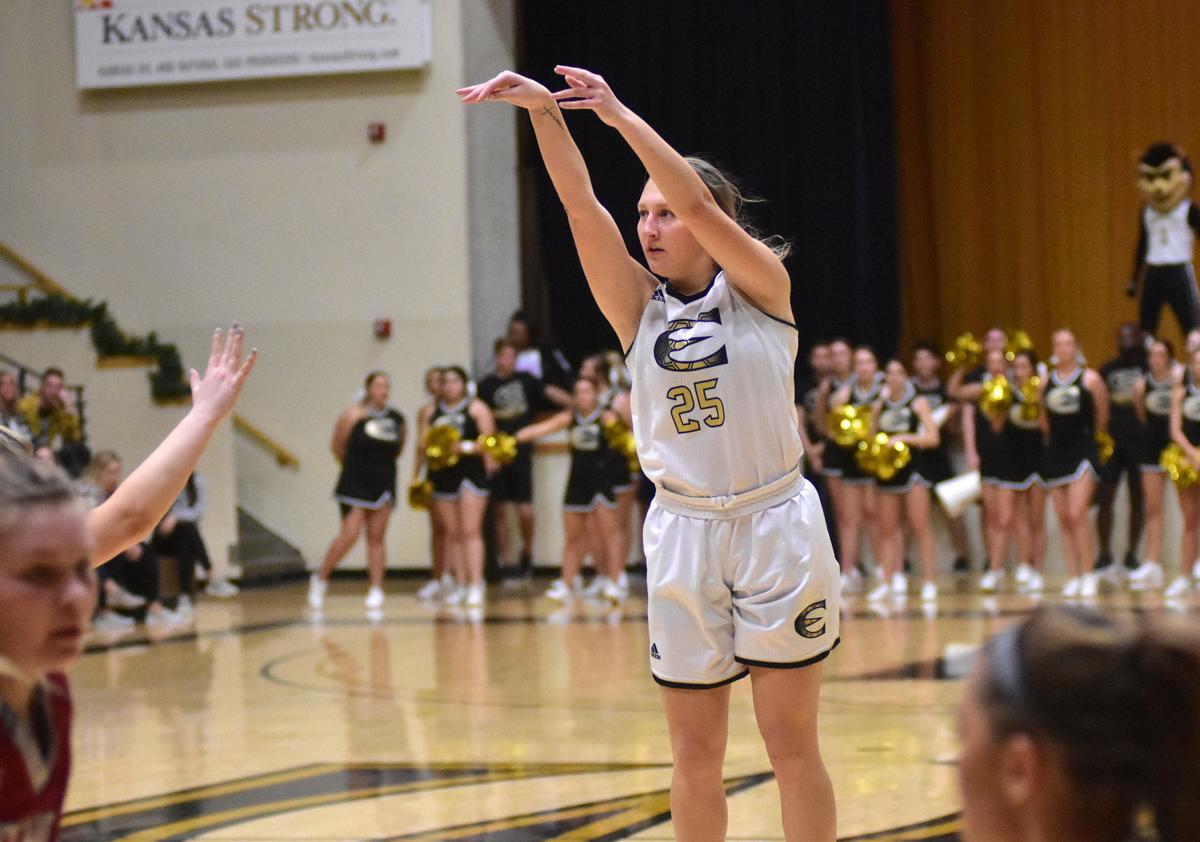 ESU freshman Grace Gordon reaches around a Bethel defender for a shot on Monday night.

Emporia State senior Jessica Wayne had eight of the Lady Hornets' 28 steals against Bethel on Monday night in a 112-42 victory.

The Emporia State bench reacts to a 3-pointer from Kali Martin (10) during the second half of Monday night's game.

For all of the things that went the Lady Hornets' way in the first half on Monday evening, there was one glaring error that Toby Wynn wanted his team to fix — shooting percentage.

Emporia State had a sturdy 44-20 advantage over Bethel in the early season meeting, largely due to the Threshers' inability to keep possessions long enough to score, committing 25 turnovers and taking just 20 shot attempts.

The Lady Hornets efficiency changed after the half.

The defensive prowess did not.

ESU finished with 28 steals and six players in double-figure scoring in a 114-42 rout over Bethel College.

"We didn't come out as well as we thought we would (in the) first half but coach got on us at halftime and I think we responded well to what he said," sophomore Karsen Schultz said.

The Lady Hornets led by as many as nine in the first quarter as the Threshers committed seven turnovers in just the first five minutes of play.

"I thought our defense led the way for us, especially in the first half," ESU Head Coach Toby Wynn said. "Defensively, we did a pretty decent job of being able to ... get some separation from those guys, just based on our activity on the defensive end. We were a very poor and inefficient team on the offensive end in the first half. (We) missed a bunch of wide open shots, were taking contested shots, so our shot selection and inability to make open looks really handicapped us there in the first half, so our defense had to be productive.

"In the second half our offense really got kick-started, we had a really spirited halftime speech and really got us going as far as being able to be more efficient offensively and being more of a confident shooter and taking the shots that are given to you and that kind of stuff. We shot it a lot better in the second half — primarily led a lot by Grace (Gordon) and Karsen came in making shots. Those guys are capable of that and they've got to do that for us. Grace hasn't had much of an opportunity so far this year. She's got some pretty good players in front of her she has to compete with for playing time. When she got an opportunity today, she made the most of it.

Gordon, a freshman from Melbourne, Australia, had seen just six minutes of court time on the young season, but got 18 highly productive minutes on Monday. She finished the night 6-of-8 shooting and a perfect 5-for-5 from long range. Most of that came in the second half.

Schultz, too, had a career night, scoring 16 points in nearly 21 minutes of play, including a 3-for-4 night from long range.

"We've played some good non-conference games ... and they just haven't had the ability to get in there and get as many minutes as we'd like to get them," Wynn said of the two. "Being able to get them in today (let) them ... see that ... all the hard work (they're) putting in practice, it's really paying off."

The pair also got in on the steals parade as eight different players recorded at least one for ESU, led by Jessica Wayne who had eight.

"At halftime, we had 17 steals, I think, which is crazy," Gordon said. "But their pressure on the ball is insane."

The only two Lady Hornets without at least one steal were junior guard Kali Martin and center Laura Laffitte, who was getting her first game action after missing the start of the season with an injury. The freshman from Spain finished with one bucket, one rebound and a pair of blocked shots.

"Especially on our home court, the atmosphere was really good (and) we were all hitting shots," Gordon said.

By the end of the night, ESU shot nearly 51 percent from the floor, with 60 points coming off of turnovers by the Threshers.

Gordon and senior Mollie Mounsey both scored 19 for ESU, while Jobe, Sheats, Schultz and Martin all recorded double-figure scoring.

The Lady Hornets (4-2) have just one more game remaining on the schedule before MIAA play opens next week. This Friday evening, the ESU women will host Washburn in a non-conference meeting as the two weren't slated to face off at White Auditorium on the original slate.

"It's a big game," Wynn said. "It's big anytime you're playing Washburn, that's the one thing you always know. For us, just getting us ready and prepared for conference play, we get to do that with a conference opponent in a non-conference game, getting a chance to play them here at White again. They've won two in a row against us here at home.

"I think it's cool timing for the game, honestly, with our fans and people being around for Thanksgiving holiday and family and people can come on a Black Friday, you can go shop early, then you can come Friday evening and come watch a highly competitive, good game."