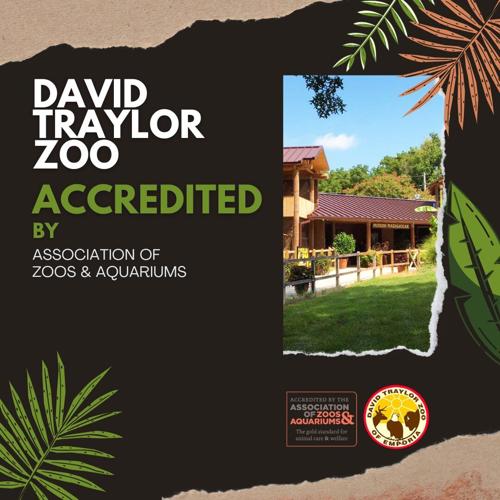 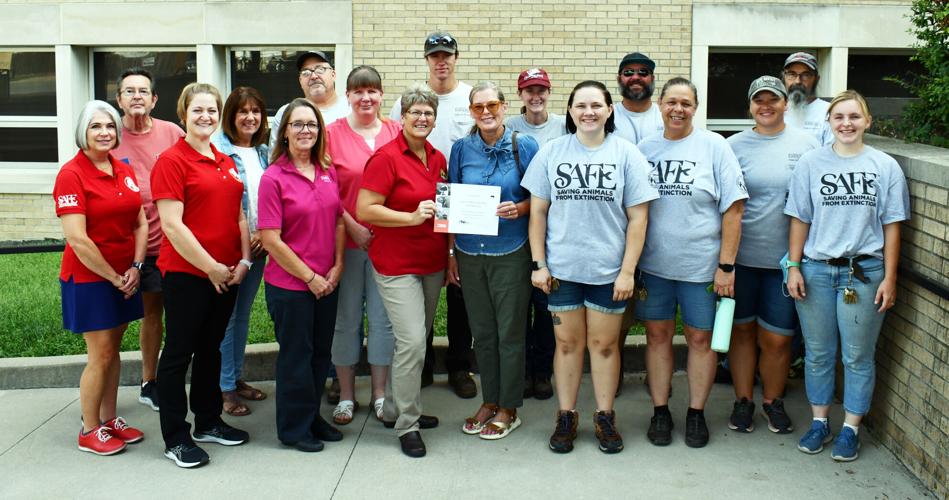 David Taylor Zoo of Emporia staff and some members of Emporia Friends of the Zoo stand outside the city of Emporia building to celebrate the zoo’s AZA accreditation.

David Taylor Zoo of Emporia staff and some members of Emporia Friends of the Zoo stand outside the city of Emporia building to celebrate the zoo’s AZA accreditation.

The David Traylor Zoo of Emporia is celebrating another accreditation through the Association of Zoos and Aquariums. The zoo has been AZA-accredited since 1985.

“It’s kind of almost a yearlong process preparing for accreditation,” said zoo director Lisa Keith, who announced the accreditation to Emporia City Commissioners Wednesday. “You have to send your application in March and it’s an extremely long application.”

The zoo had an onsite visit in June, where a two-and-a-half day inspection took place. Three outside inspectors were involved in the visit from Baltimore, M.D., San Antonio, Texas, and Santa Barbara, Cali. Keith said they looked at “all aspects” of the zoo’s operations, including animal welfare, veterinary care, keeper training, safety for visitors, staff and of course, for the animals.

Keith said they also looked at the zoo’s education programming and conservation efforts, as well as the financial stability of the zoo as a whole.

“They look at our governance — we’re owned by the city of Emporia — and they look at our guest services,” Keith said. “It’s very meticulous. They go into a lot of detail with our support society because it’s extremely important to the zoo and the way it operates.”

Keith, along with Emporia Friends of the Zoo president Erren Harter and vice president Colleen Mitchell, then went before the national accreditation board at the national conference in Baltimore to answer any remaining questions they had regarding the zoo’s inspection and application. Zoo staff were informed of the zoo’s reaccreditation shortly after.

“I think it was important for our EFOZ board members to experience and was quite an eyeopener for them because it is not an easy task at all,” she said.

Keith said it’s exciting for the David Traylor Zoo of Emporia to stand up with larger zoos around the world.

“We are one of the smallest accredited zoos in the world,” Keith said. The AZA accredits a little more than 200 zoos across the United States and around 11 countries. “It’s really only 10% of all the animal exhibitors licensed in the U.S. Department of Agriculture, very few who pass their standards. So to us, it’s like a huge gold standard. It’s like we can say that we are meeting and exceeding the standards, just like the San Diego Zoo and just like Omaha’s Henry Doorly Zoo.”

Keither added that Emporia’s zoo is matching what those large zoos, with the budgets to match, are doing with much smaller resources.

“I think that says a lot for the zoo and it says a lot for our staff and our community, our city,” she said. “It takes every single one of those working together to make it happen.”

Keith stressed that the zoo’s staff was responsible for its success.

“We have a wonderful horticulture staff, we have a park staff that steps up once in a while when we have maintenance issues, you know,” she said. “We’re such a small zoo they have to wear a lot of hats and I think Emporia needs to be proud of what we have here because it’s pretty special.”

Keith recommends looking for the AZA logo when visiting zoos in other communities.

“Make sure you’re supporting those zoos that are meeting those standards,” she said. “The highest standards of animal welfare.”

Special Section celebrating the winners of the 2022 Emporia Gazette Readers Choice Awards. Congratulations to all the winners.