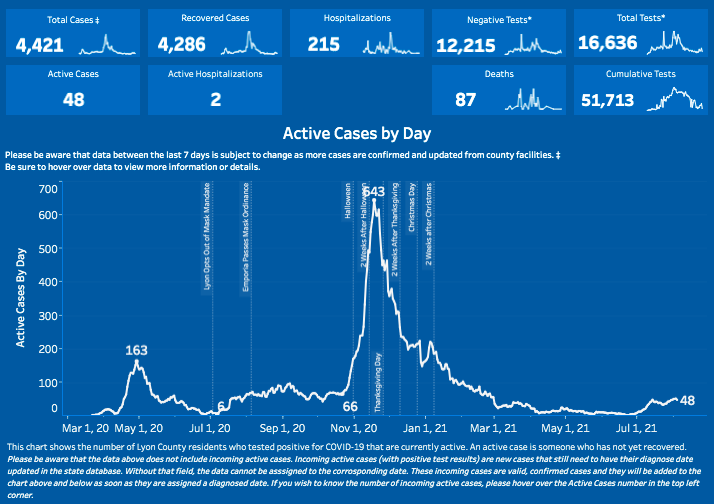 Newman Regional Health will not be joining the growing number of employers mandating vaccines for its staff, CEO Bob Wright told The Emporia Gazette this week.

Wright said he believed issuing such a mandate would be a misstep for the hospital, where about 75% of staff are already vaccinated.

“While we would prefer everyone get vaccinated, that’s not a realistic expectation,” he said. “We’re nearing 75% of our staff being vaccinated and frankly, I think that’s about as good as we’re going to see. We might make it to 80% but I don’t think we’re going to get much beyond that.”

At a time when the hospital is already experiencing staffing shortages and bringing in contract staff to fill positions and bring relief to existing employees, Wright said putting such a mandate in place would be “self defeating.”

“I don’t question others do it if they feel that that’s right for their hospital and their particular need,” he said. “But we’re small. We don’t have a lot of standby staff available. We’re not in a situation where we’ve got three or four tertiary facilities within 10 miles of us and we can kind of trade staff back and forth on a per diem basis when they want to work a little bit of overtime. We just don’t have that.”

Wright said they have not seen transmission within the hospital between patients and staff. Masks are still required to be worn inside the hospital and he believed mitigation protocols were working effectively.

“If situations change quickly we have to be flexible, but I think what we’re doing is working very well,” he said. “We certainly don’t want to put pressure on those who, for whatever reason, are concerned about taking the vaccine at this point in time.”

As of Wednesday, 15 new positives were reported and 10 recoveries were reported by local health officials, bringing the total number of active cases to 48. Of those active cases, just nine are breakthrough cases — or patients who have been vaccinated.

It is unfortunate that Newman is using nonsense excuses to not require employees to be vaccinated. The science is there and I'm sure the medical staff with IQs higher than carrots would support mandatory vaccination. The Covid 19 virus has evolved into an IQ test.

It definitely is an IQ test, the issue may not be with the protein therapy itself, but the logistics and hassle of getting personnel who have spent the last 25 years working with HIPAA regulations, to freely release personal health information to all of the many facilities that they may be working with.