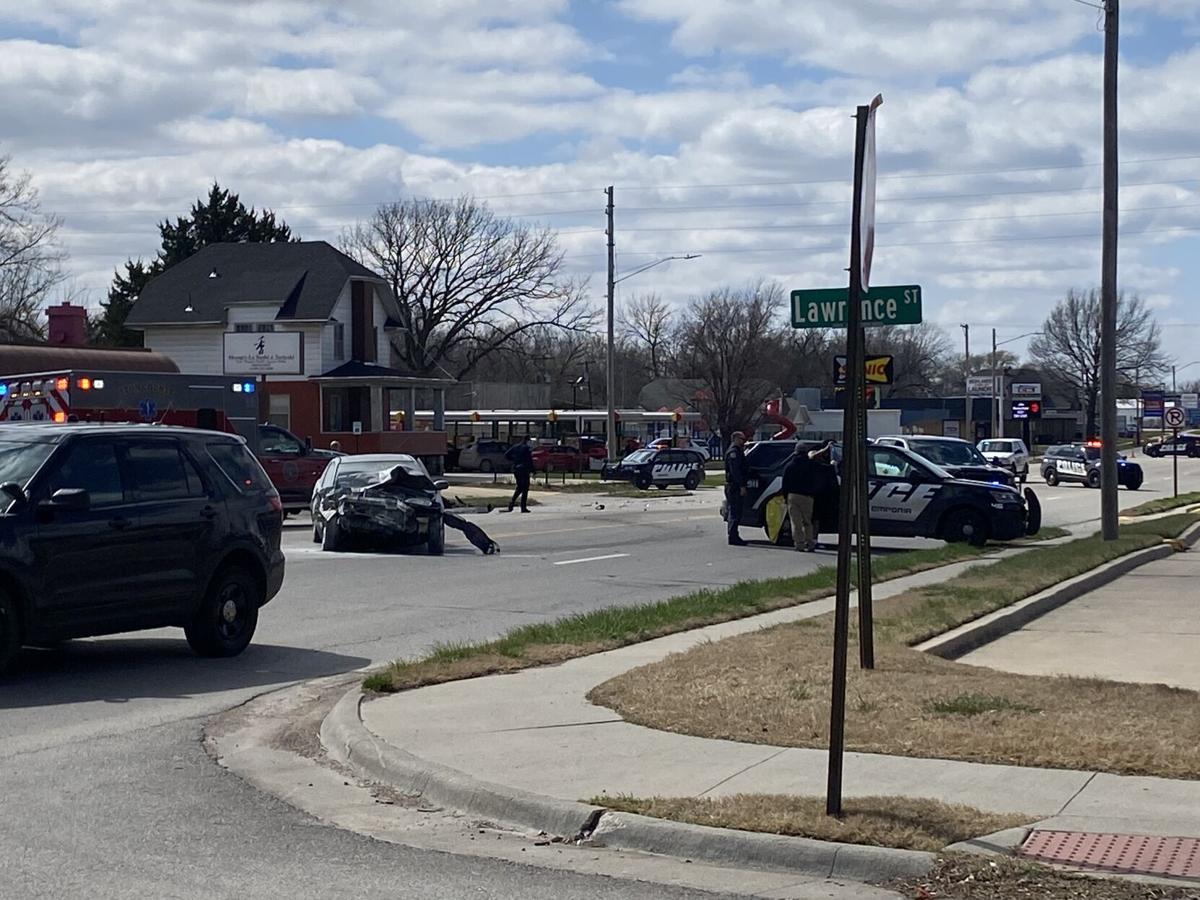 A car sits in the middle of W. Sixth Avenue, Thursday afternoon, following a two-vehicle wreck. 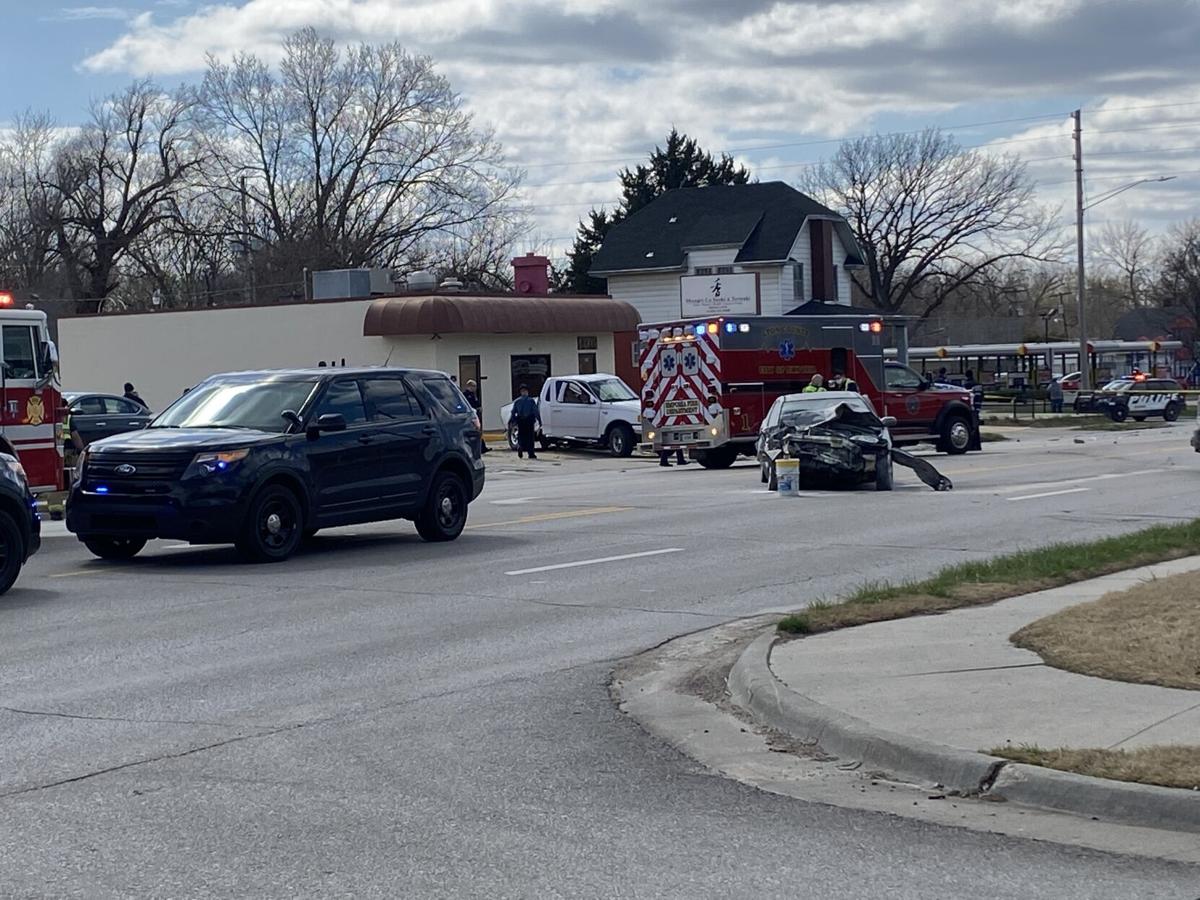 Law enforcement and first responders assess the scene of a fatality wreck in the 1000 block of W. Sixth Avenue, Thursday. 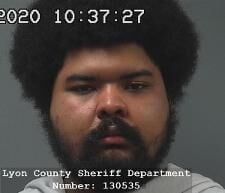 A car sits in the middle of W. Sixth Avenue, Thursday afternoon, following a two-vehicle wreck.

Law enforcement and first responders assess the scene of a fatality wreck in the 1000 block of W. Sixth Avenue, Thursday.

An Emporia man was killed and reckless second degree murder charges are pending after a high-speed pursuit resulted in a two-vehicle wreck on W. Sixth Avenue, Thursday afternoon.

Steven A. Henry, 64, was pronounced dead after his vehicle was struck from behind at a high rate of speed. The other vehicle was driven by Devawn Mitchell, 23, also of Emporia.

According to a written release from Emporia Police Sergeant Lisa Hayes, Mitchell was initially observed by an EPD officer in the 600 block of Commercial Street, driving at a high rate of speed around 1:22 p.m. Mitchell allegedly swerved and attempted to "ram the officer's patrol vehicle," at which point the officer initiated a pursuit.

Hayes said the pursuit was called off seconds later due to speed and going into a residential area.

Then, around 2:10 p.m., a second officer observed Mitchell on the west side of town. The officer observed Mitchell's activities until other officers arrived. Mitchell accelerated away from one officer who Hayes said did not engage in pursuit, but was followed at a distance by other officers as he drove south on Graphic Arts Road to W. Sixth Avenue.

Michell then drove east on Sixth Avenue, turned south onto Graham Street and stopped in the 300 block of Graham. Patrol cars block the street — both behind and in front of Mitchell's car — and an officer "attempted to communicate with Mitchell verbally." Another officer attempted to place stop sticks in front of Mitchell’s car tires for the safety of all involved.

Before stop sticks could be placed, Mitchell accelerated over curbs and onto a residential street where he returned to W. Sixth Avenue.

The chase was again called off.

As officers got to the intersection W. Sixth Avenue and W. US Highway 50, "they could no longer observe Mitchell’s vehicle." Hayes said this was about the 2100 block of US-50.

Another officer in an unmarked vehicle was heading westbound in the 600 block of W. US Hwy. 50 when he observed Mitchell's car in the 1000 block of the roadway. Mitchell "appeared to be going very fast."

The officer called in a traffic collision after observing a large cloud of dust shortly after spotting Mitchell's vehicle around 2:30 p.m.

Officers arrived on the scene and began administering life-saving measures to Henry, who was later pronounced dead at the scene.

Mitchell suffered minor injuries and was transported to Newman Regional Health via ambulance. He was released later and booked into the Lyon County Jail on charges of Reckless Second Degree Murder and Aggravated Assault on a Law Enforcement Officer.

This investigation is on-going and further details will be released as they become available. The Kansas Highway Patrol is assisting in the fatality accident investigation.

Hayes said Sixth Avenue will be closed between Walnut and Oak streets as work is done at the scene for several hours Thursday evening.

My question here is: Is it so vital to catch some second-rate criminal that high-speed chases have to be conducted on the town streets and innocent bystanders have to die?

There was no high speed chase, it says in the article the pursuit was called off in seconds. The high speed chase story came from Facebook armchair journalists. My thoughts are with the Henry family and I agree Mr Mitchell deserves 20k volts for murdering this man.

What a painful story. One of the greatest athletes in ESU history murdered for no reason by a career criminal running from the law again. I loved watching him play. Hornet Nation took a severe blow on this one. ESU Grad1979.

I'm going to need more information before I join the lynch mob, but I'll look for my torch. Occasionally we get a glimpse into our neighbors more violent tendencies. I do hope that Blueheeler is not in law enforcement, but they probably should watch him.

Too bad you can’t have a little more respect with your comments. This is no joking matter. Shame on you

No way is this second degree murder. At least not conventional second degree murder. There was no malice or intent to kill anyone. Unless there's a law equating fleeing an officer with a more serious crime there is no way this will stick. Think 6 months in jail for speeding and manslaughter for killing. Back on the street and behind the wheel in 2 years for good behavior. It was an "accidental" killing!! The law is a joke! Big gap in laws. As long as I have been alive it's been essentially legal to kill someone with your car. Just lose your license for 6 months Claim you didn't see 'em. Claim you hit the wrong pedal. Say it was an 'accident'! Republicans want to make it even easier. They want it to be legal to run down demonstrators and kill them. But only black demonstrators. Need to make killing someone while fleeing an officer a capital murder crime and hang them. Read about that white man in FL killing all those Asians? Blames it on being a sexaholic. That's a good defense. So good I'd reduce the voltage from 20,000 to 19,900. Maybe we can have a double fry with him and this Mitchell guy. A double whopper. A twofer. Gotta change these laws.

I would like you to talk about it in a different light. Yes he didn’t mean to kill the person, but second degree murder is defined as murder that is not premeditated, or murder that is caused by the offender's reckless conduct that displays an obvious lack of concern for human life. This man killed an innocent man who was not doing anything because of the reckless decision the man made. He should get everything that is coming to him.

Maybe you’re not understanding the sarcasm that Hollow uses throughout his comment. Pretty sure 20,000 volts would be agreeing to your opinion.

Yes looks like first degree murder! Throw away the key

AS usual your not making any sense Hollow. Your tin foil hat must be of center.