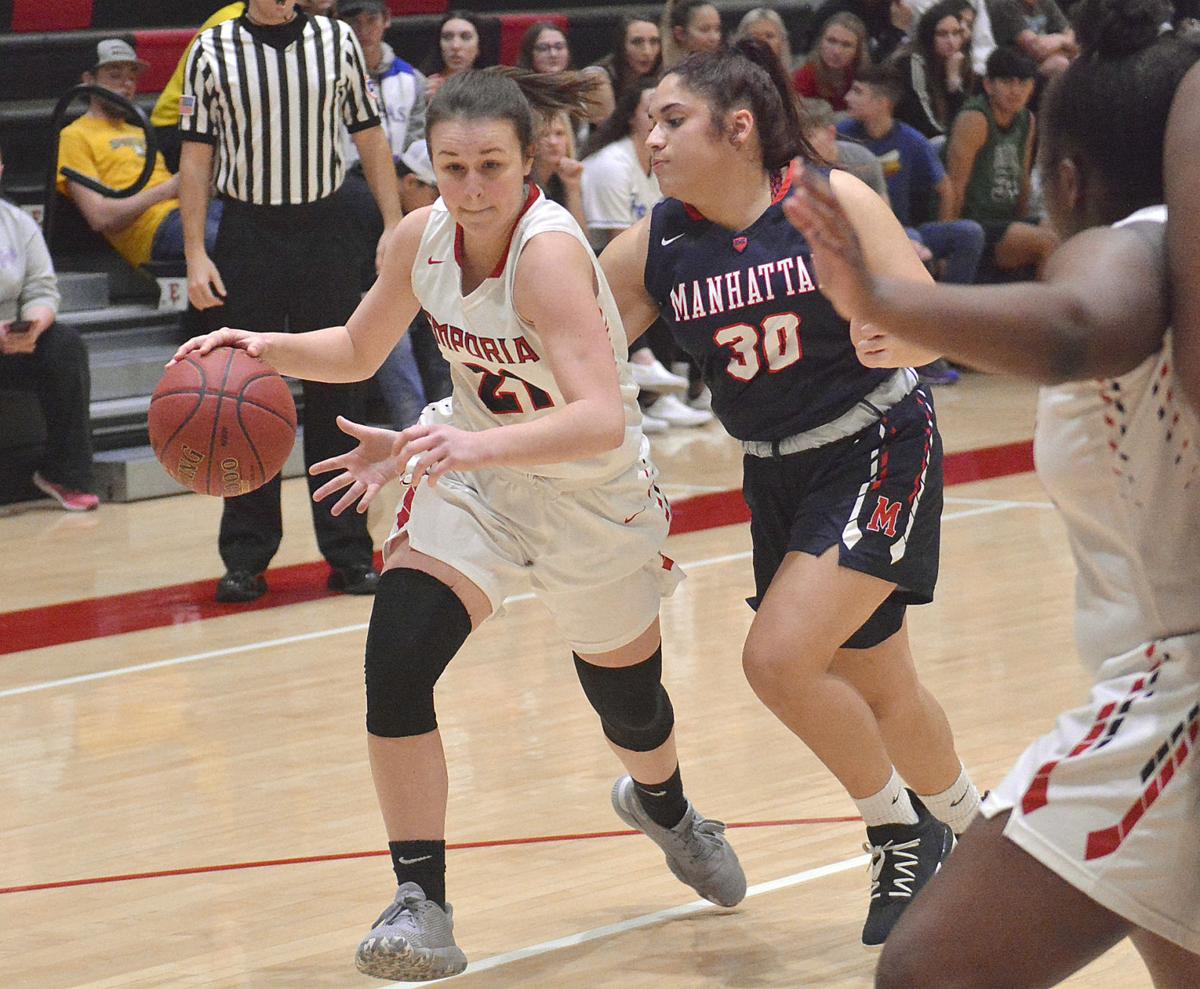 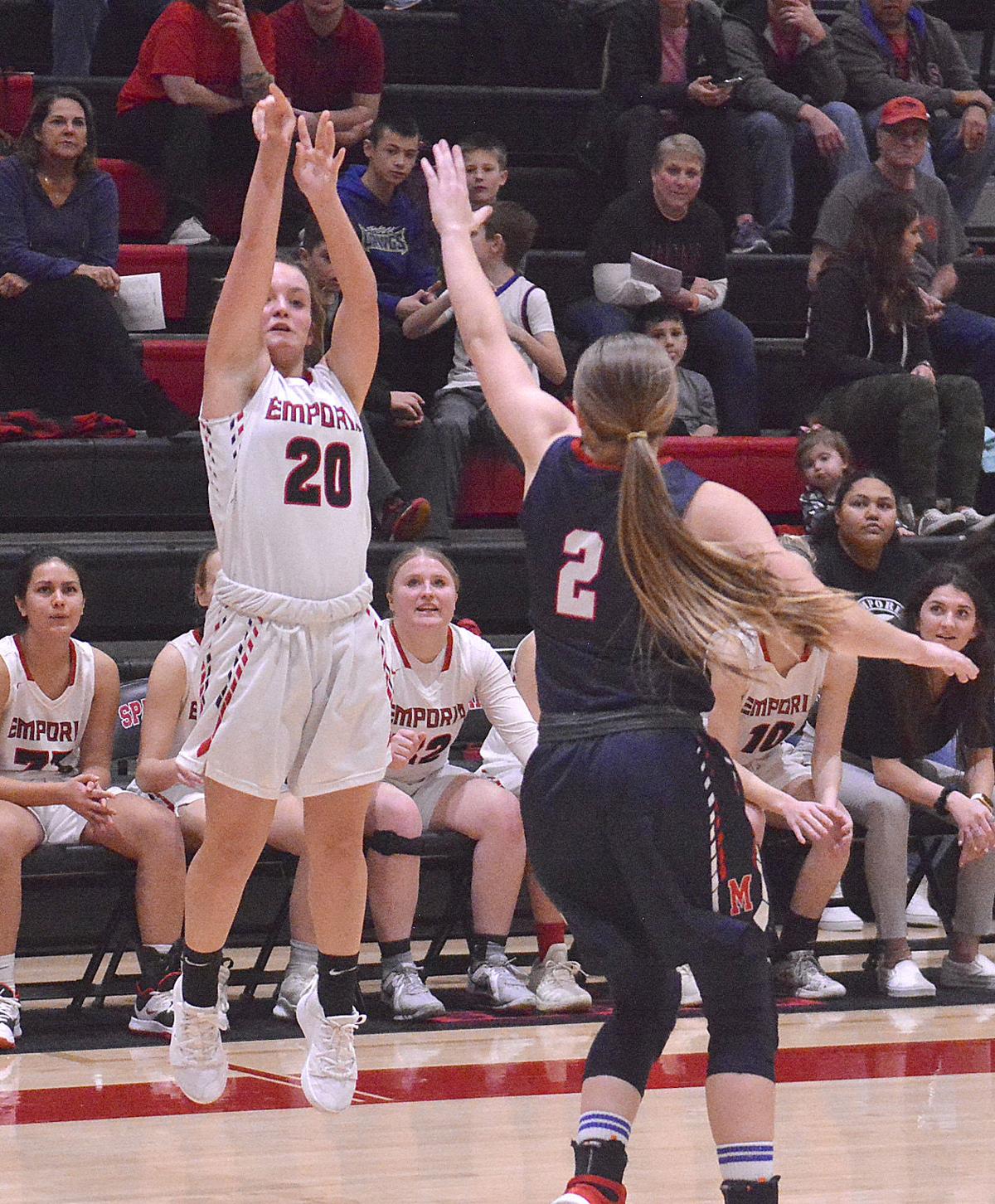 Allie Baker (20) puts up a 3-point attempt in the second half of the Spartans’ 44-27 win over Manhattan on Tuesday. Baker scored seven points on the night. 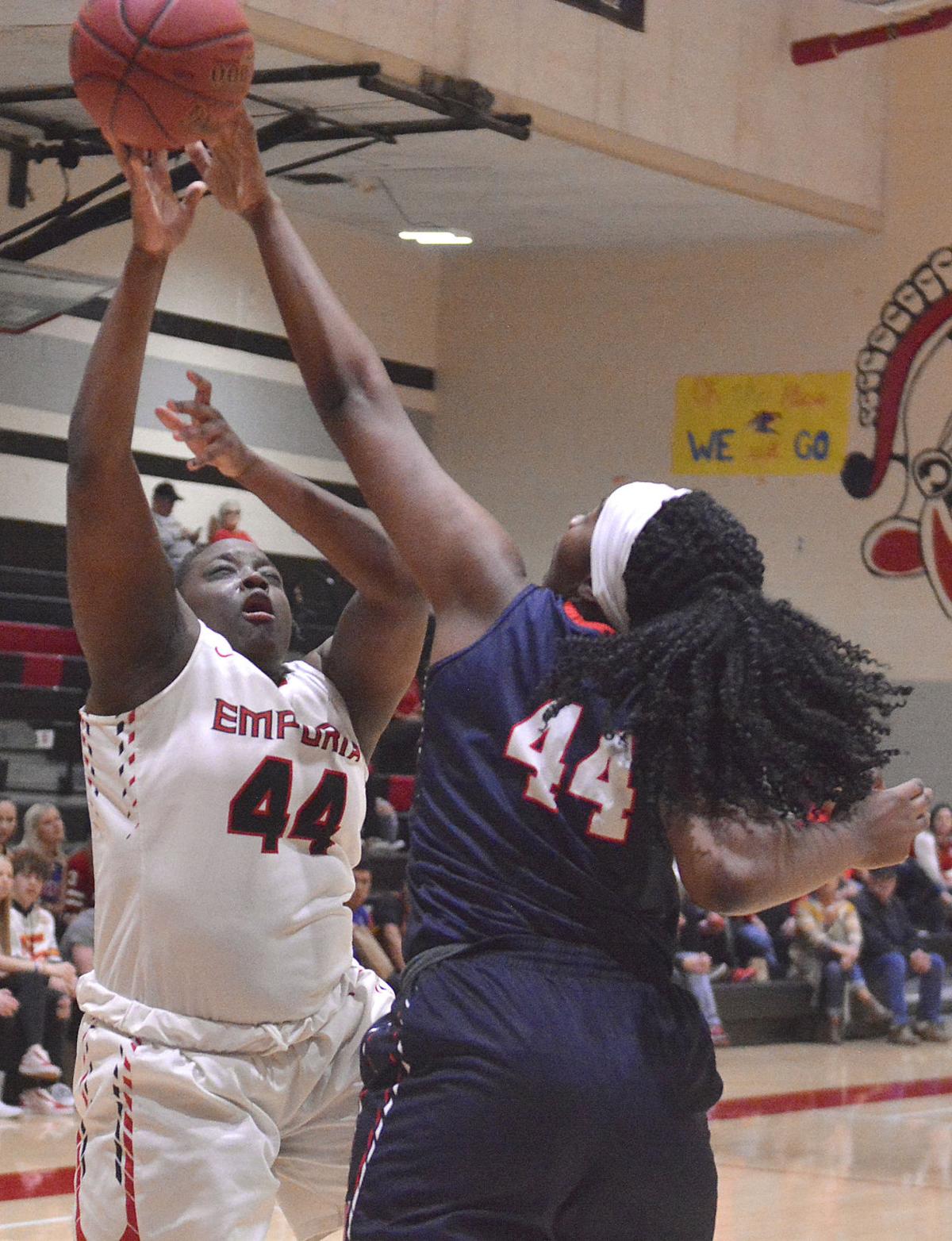 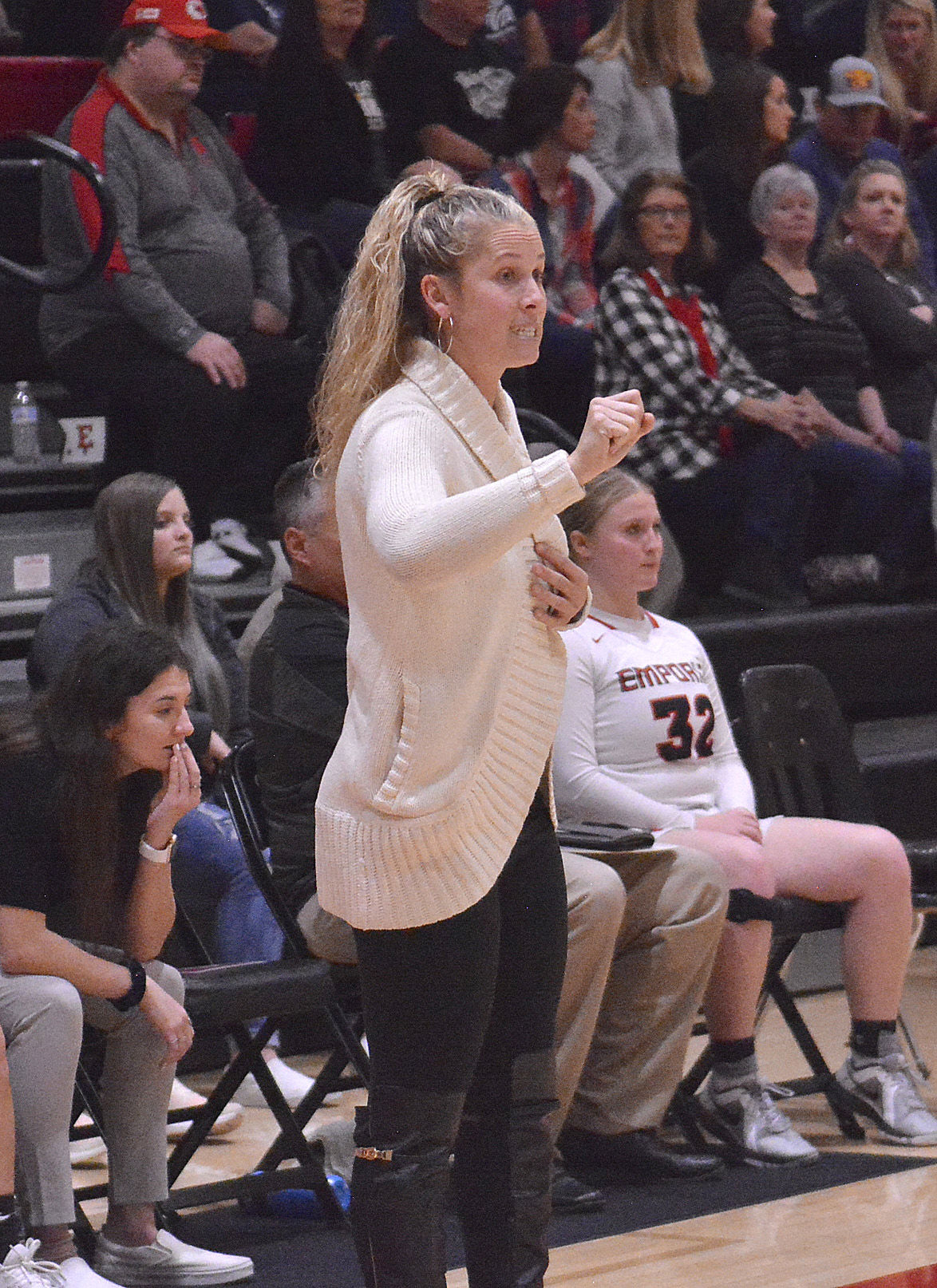 EHS Head Girls Coach Carolyn Dorsey signals to the players on the court during the second half of the Spartans’ victory over Manhattan on Tuesday. The win was E-High’s third in league play. 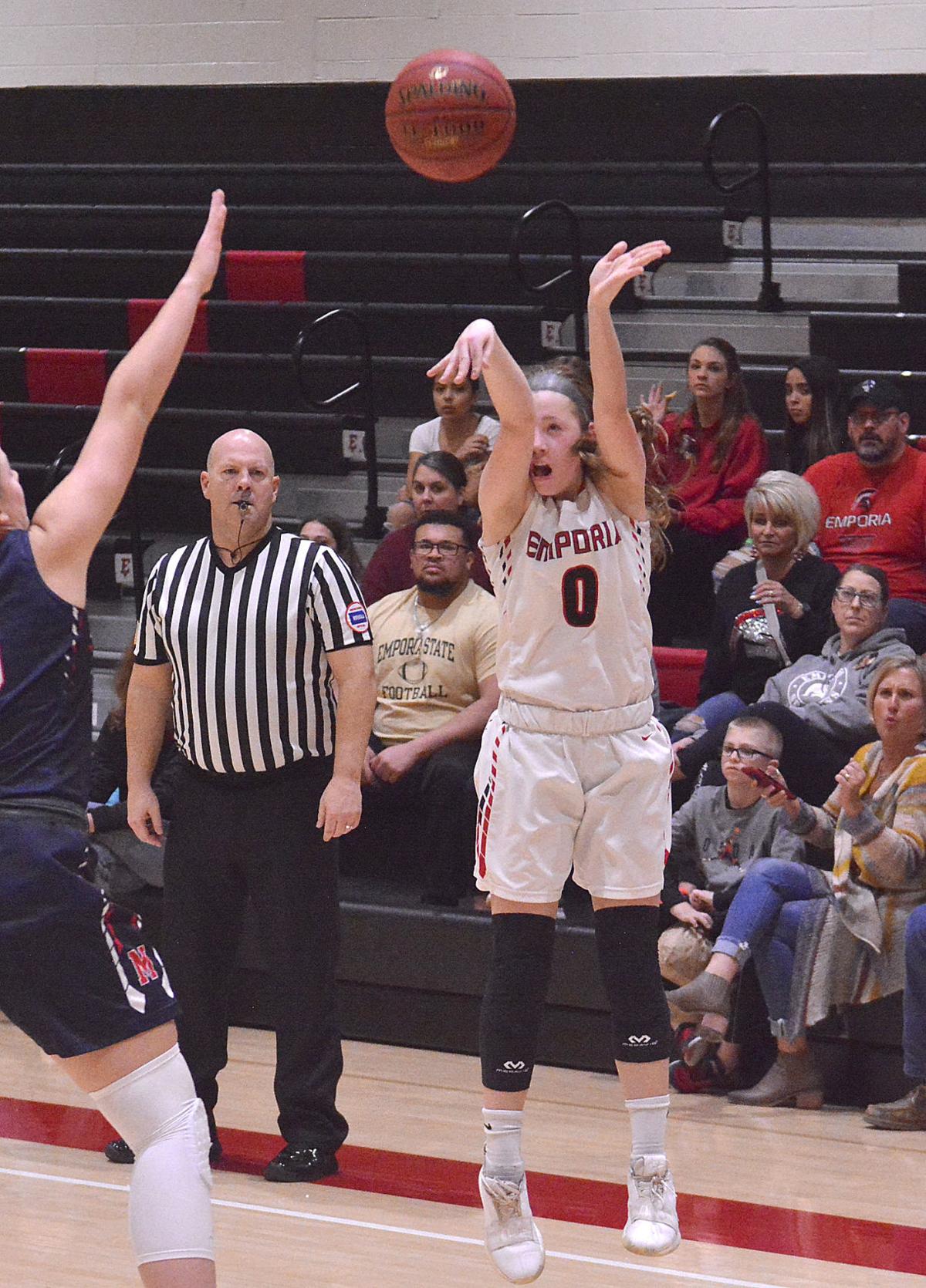 Allie Baker (20) puts up a 3-point attempt in the second half of the Spartans’ 44-27 win over Manhattan on Tuesday. Baker scored seven points on the night.

EHS Head Girls Coach Carolyn Dorsey signals to the players on the court during the second half of the Spartans’ victory over Manhattan on Tuesday. The win was E-High’s third in league play.

The Emporia High girls found some self-infused spark Tuesday night in their home matchup with Manhattan.

E-High never trailed in the contest, getting big plays all the way around in a 44-27 win over the Indians.

“We haven’t beaten Manhattan in a long time ... it was a great win tonight,” said senior guard Rayanna Breshears.

It was Breshears’ performance, perhaps, that stood out the most as she scored 15 points, including five straight to open the third quarter and give her team some separation.

“I’m really impressed with them,” EHS Head Coach Carolyn Dorsey said of her team. “I think there was great leadership tonight. Our seniors led very well. They all made plays down the stretch that we really needed. Ray had a good night (and) defensively we all played well together.”

It started with 5-3 junior Allie Baker, who opened the scoring with a 3-pointer from the far corner. Manhattan answered with 6-3 senior forward Zanaa Cordis making a pair of free throws. Cordis scored all six of her team’s points in the first, but another corner trey, from Gracie Gilpin off an inbounds throw, kept the Spartans in the drivers seat with a 2-point margin entering the second.

“We talked about keeping (Cordis) out of the paint,” Dorsey said. “She’s a big girl. That’s a 6-3 post player that we don’t have ... don’t come close to. I thought they made it difficult for her. Our guards did a nice job. We helped really well and made it difficult to throw (the ball) inside. Then we closed out well. We’ve got some kids that are really taking some pride in keeping people in front of them. We knew that was going to be important because they want to drive, then dump down inside. Our guards limited their opportunities.”

Manhattan’s Jaiden Weixelman tied the score at eight with a deft spin-move jumper less than a minute into the next period, but a 3-pointer from Breshears started put the Spartans in front to stay, though it was just a 3-point margin at halftime.

“We wanted to hit them strong and attack them early and not (let them) attack us first,” Breshears said. “All our energy in the beginning just transferred into the second half.”

Breshears scored the first five points of the second half to give E-High some needed breathing room. That remained going into the fourth, where free throws were the primary offense remaining. EHS was 13-of-14 from the stripe in the final eight minutes, while Manhattan’s offense remained in dormancy. The Indians had just eight field goals on the night, none from beyond the 3-point arc.

“Manhattan’s a good ballteam ... there’s a lot of things they have going for them (but) we didn’t let up,” Dorsey said. “We’d really been hammering on (the team) about being the aggressors and getting in the paint and being tough enough to get there, make a play or kick it to (another) person. I’m just really pleased, because I think all those things we’ve been talking about over the past two weeks is starting to translate (on the court).”

Baker believes Tuesday’s lesson was a big one in helping the Spartans the rest of the way.

“We can work hard and get what we need done,” she said.