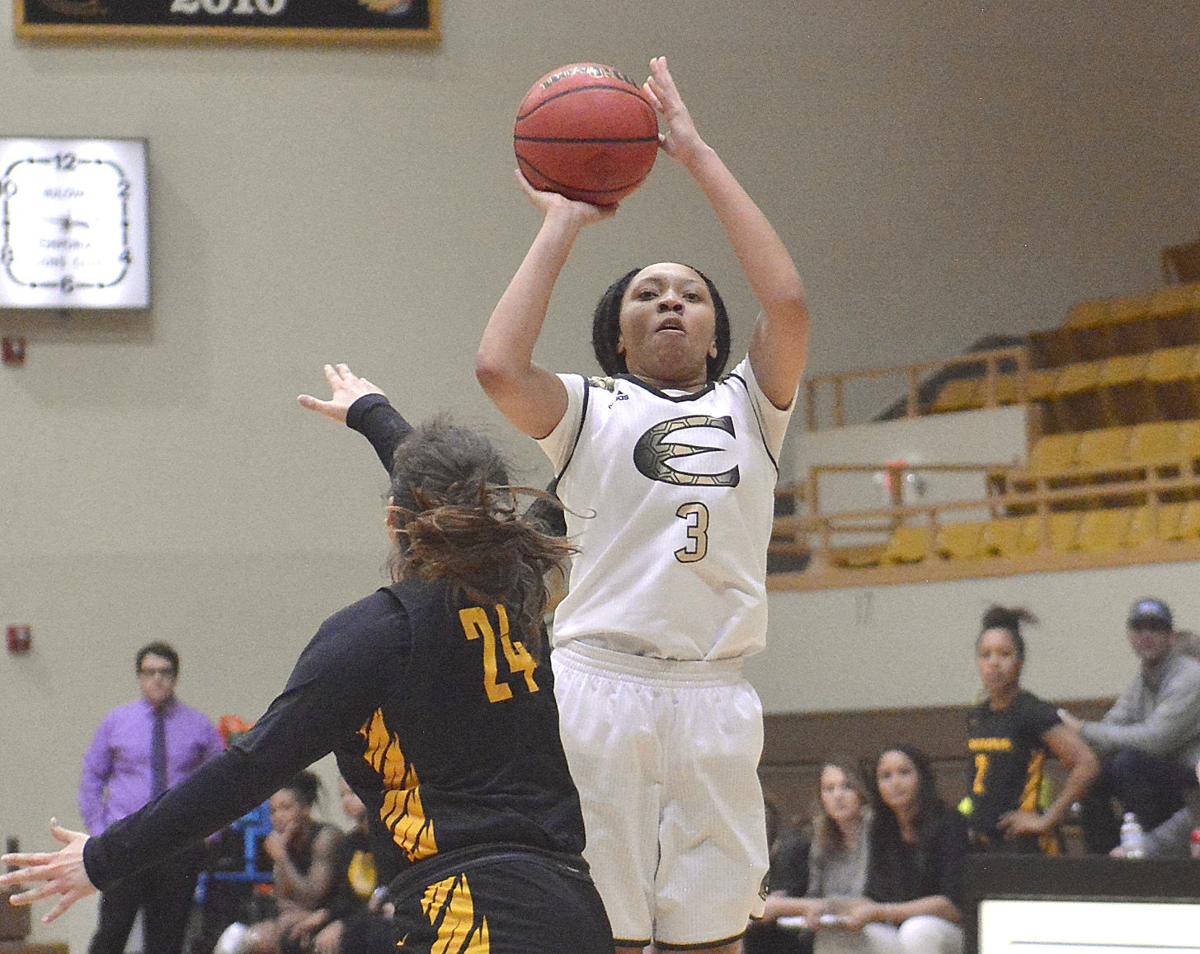 Freshman Tre’Zure Jobe scored 14 second-half points to help No. 16 Emporia State keep hold of the lead in a 74-70 victory over Missouri Western on Saturday. 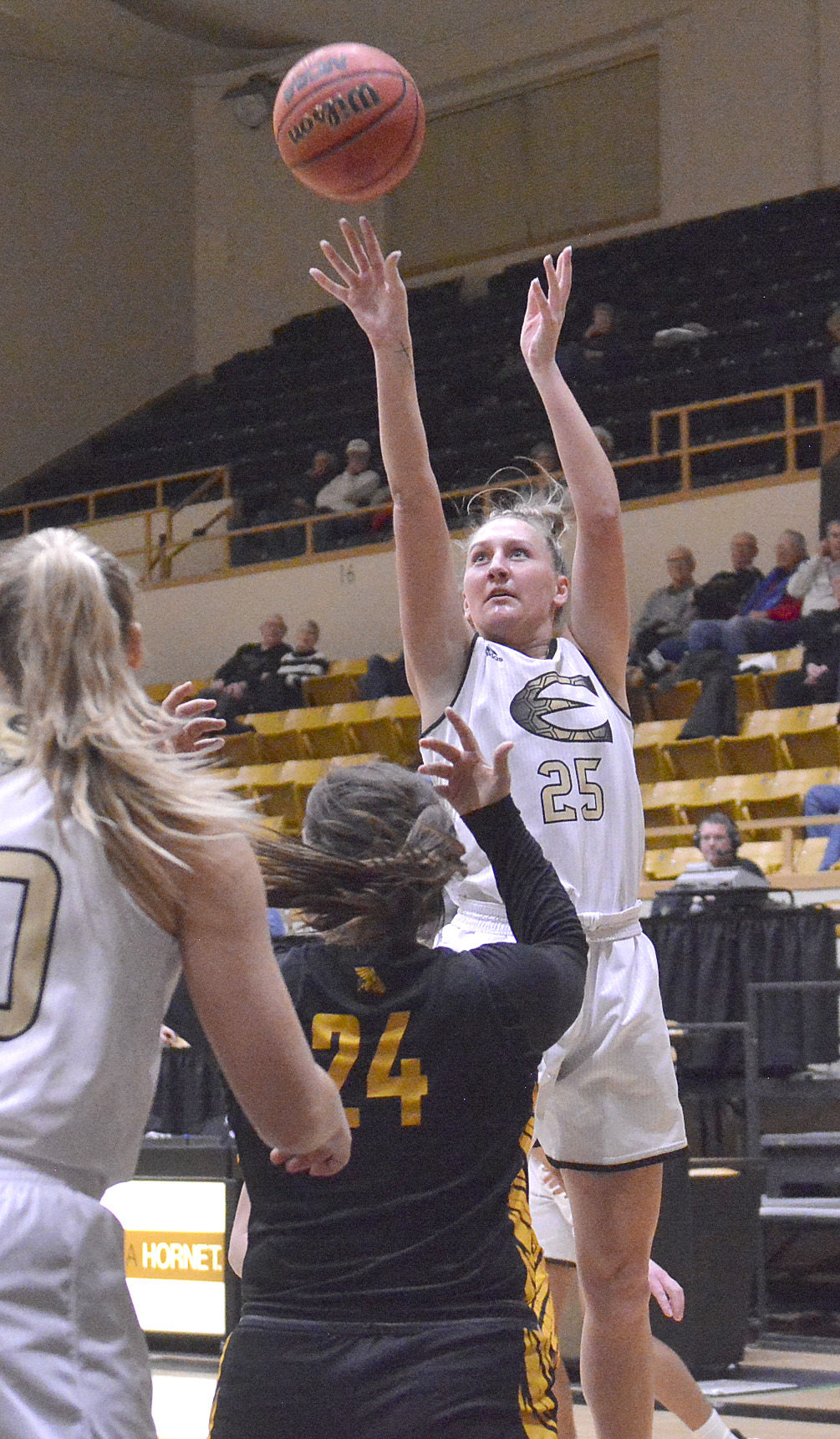 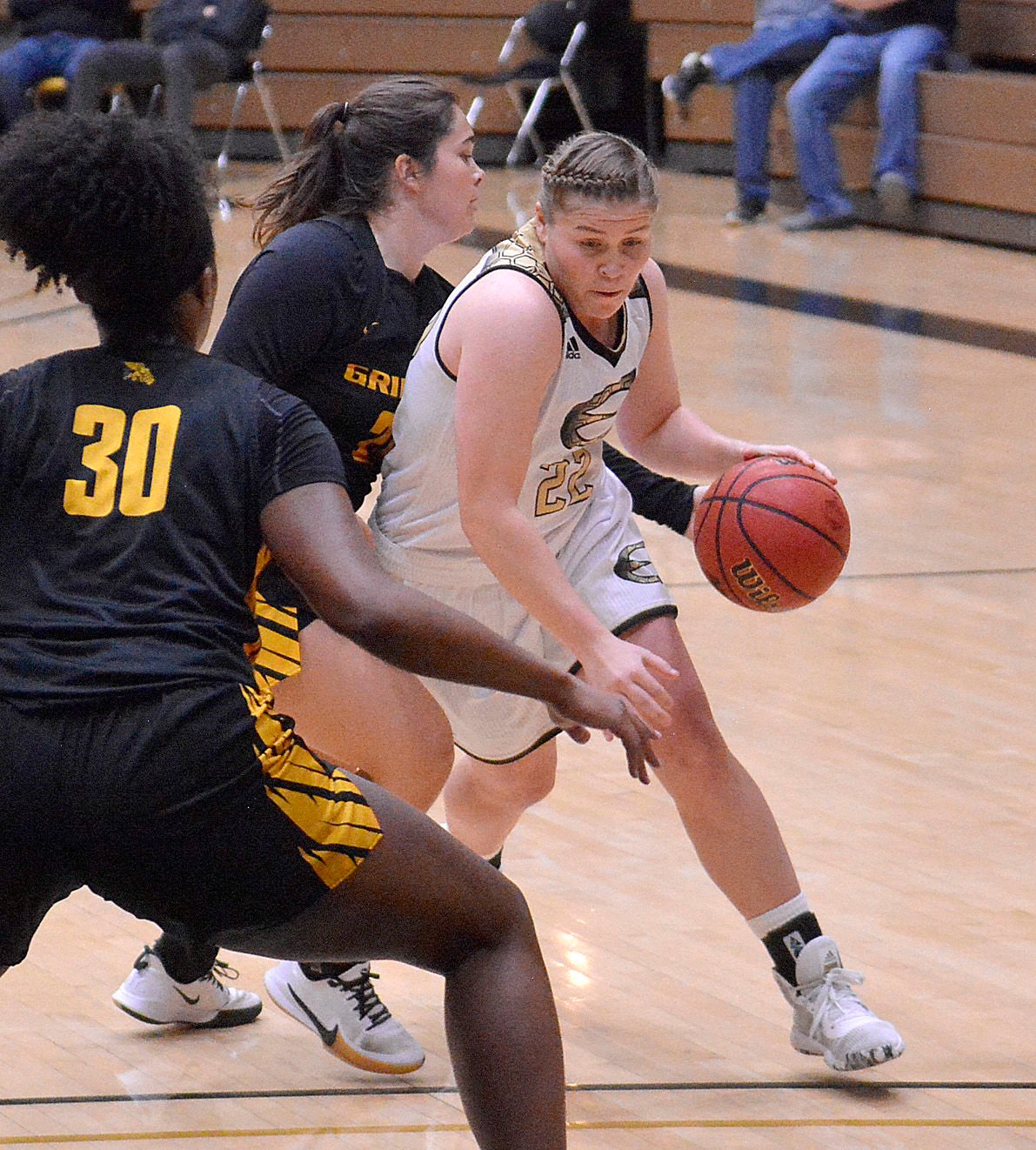 ESU senior Mollie Mounsey (22) weaves through a jam of MWSU defenders on Saturday.

Freshman Tre’Zure Jobe scored 14 second-half points to help No. 16 Emporia State keep hold of the lead in a 74-70 victory over Missouri Western on Saturday.

ESU senior Mollie Mounsey (22) weaves through a jam of MWSU defenders on Saturday.

Just as the 16th-ranked Lady Hornets go, so does freshman guard Tre’Zure Jobe.

She continues a torrid stretch of the season, earning her second consecutive MIAA Player of the Week award, it was announced Monday. It was Jobe’s third such award of the year.

Her most recent came on the heels of a pair of victories over Northwest Missouri and Missouri Western last week.

Between the two games, Jobe averaged 24 points and 5.5 assists.

It was another accomoplishment that followed ESU surviving a fourth-quarter push by the Griffons on Saturday.

The Lady Hornets held a 20-point lead with just the final five minutes approaching, but the Griffons slashed it down to a one-possession game with just 23 seconds remaining.

“These games are tough,” ESU Head Coach Toby Wynn said. “Thursday-Saturday games are tough. To be able to have your team rally and ... just get through the fatigue aspect of it and having short prep ... they’re tough. I think any little thing that you can take away from it when you win the game, you’ve got to try to ... spin it for the positive. There’s a lot of different things we could look at (as problematic) but we shot the three good enough and made enough of them at key moments, at key times to give us the offense we needed. (MWSU is) the most physical team we’ve played against ... defensively as far as getting in passing lanes and making it difficult for us to run offense. I think, at the end of the day if your players can just find a way to get through and ... win those games, it’s a huge feather in your cap for your team.”

As a whole, ESU shot 34 percent from the floor and were 12-for-30 (40 percent) from beyond the arc, but shot just 30 percent in the final 10 minutes while the Griffons made it close by hitting at a 56 percent rate, including seven of their final 11 shots.

“I definitely believe that we took (our foot) off the gas a little bit,” Jobe said.

Still, it was she, who after a pair of turnovers in a 30-second span, hit a 3-pointer to kick a six-point lead back to nine, keeping the Griffons at bay long enough for ESU to snap MWSU’s late run.

“She has the ability to do that,” Wynn said of Jobe. “She’s going to probably seeing more and more hard pressure, people trying to get up on her (defensively) making her have to handle it (carefully), work harder for it.”

After MWSU’s got an old-fashioned 3-point play with 23 seconds left, making it just a three-point spread, Mollie Mounsey and Jobe were a perfect 4-for-4 from the free throw line to keep the Lady Hornets in front at the game’s end.

While the Griffons struggled to get shots to go down in the first half, making just eight field goals, ESU captured a double-digit lead in the first quarter and held it throughout the second, making the final five minutes feel even more stunning.

“It’s not too often you can shoot 33 percent in your own gym and win a game, but when you’re able to do that — you’ve got to be proud of your players,” Wynn said. “In the second half, we didn’t play as good as we would’ve liked — in the fourth quarter in particular. (But) we held on and won the game and for us, that’s the ultimate thing that matters.”

Mounsey, who is the Lady Hornetes’ second-leading scorer on the season to Jobe, was just 2-of-9 from the floor with 10 points.

ESU improved to 12-2 on the season and remained unbeaten yet in MIAA play. It will face an even steeper challenge this week, with a road trip to No. 13 Fort Hays State and Nebraska-Kearney on the docket.