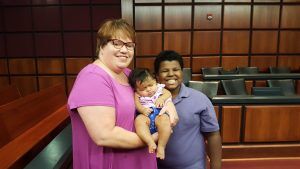 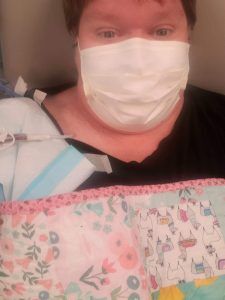 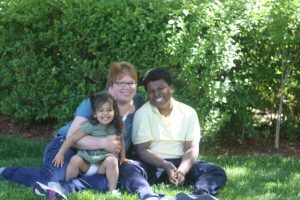 Editor’s note: Jessie Wagoner is an Emporia native and former writer for The Emporia Gazette. Although she now lives and works in McPherson, we are sharing this story to raise awareness for a great need: living donors.

The mother of two and editor of the McPherson News-Ledger said she tells herself this during the sick days, the dialysis, the hospitalizations and the time spent simply hoping she’ll live.

“There are thousands of other people waiting for kidneys,” she said. “I sit next to amazing people at dialysis who need kidneys. I’m not special. But my kids are.”

Doctors diagnosed Wagoner with end-stage kidney failure in March, and she has joined the 100,000 other Americans who are on the kidney transplant list.

According to the National Kidney Foundation, 5,000 on the list die each year awaiting a transplant that never comes. Another 5,000 are removed, becoming too sick for a transplant procedure to be viable.

“I’ve got a couple of years as long as I don’t get an infection,” she said of her life expectancy without a transplant. “Most people waiting for a transplant die from infections.”

She’s watched this happen to people she’s gotten to know during her dialysis sessions. One acquaintance died from an abscessed tooth while awaiting a kidney.

Those on the transplant list, on average, wait 3-5 years for a kidney from a deceased organ donor.

With time limited, Wagoner has one option available with her current prognoses: find a living person to give her a kidney.

In March, when doctors told Wagoner that her kidneys had failed, she said she strongly considered hospice.

“I”m not scared of dying at all,” she said. “I know where I’m going to go. I’ve had a full life and a life that I love. But, god, I’m terrified of leaving my kids.”

Wagoner was adopted herself and knew she always wanted to adopt.

“Kids would put balloons under their shirts and pretend they were pregnant. I had a stack of papers, pretending I would adopt,” she said of her childhood.

Taking care of the children represents a large part of Wagoner’s life, both from an emotional and practical perspective. She adopted them shortly after their births, knowing that both suffer from the effects of fetal alcohol spectrum disorder. Those effects manifest in different ways for the children.

“Sylas has a lot of mental health issues, depression,” she said.

Wagoner has spent much of her life working jobs within the foster care system at TFI Family Services and SOS Child Advocacy Center. She explained that finding homes for children with special needs can be difficult.

With her terminal diagnosis, she said she had to start putting plans in place for them.

“I do have a family friend that will take Selah,” she said. “Sylas, it’s most likely he would end up in foster care. I don’t have anyone willing to take him.”

She said she believes Selah would be OK without her. She doesn’t know if that’s the case for Sylas if he would enter into the system.

“Sylas was the only reason I backed out of hospice,” she said. “I have to do this for Sylas. I’ve had to make a plan for them if I don’t make it. And that plan isn’t very positive. So I really need to live.”

Wagoner had prepared for a lot of things in life but not for her kidneys to give out.

“It came on very quickly,” she said. “I didn’t realize I had any kidney problems. Last winter, I had a horrible, horrible cough that wouldn’t go away. I kept rapidly gaining weight.”

She kept seeing doctors, trying to figure out the cause. It became harder and harder to breathe.

She was hospitalized and told it was congestive heart failure. As time passed, they figured out that the issues with her heart were caused by an excess build-up of fluid with her kidneys losing function.

Her kidneys were at 27 percent functionality when she found out they were a problem.

The cause of the failure, she believes, is from diabetes, which took a toll on her kidneys, as well as receiving a strong antibiotic to deal with a MRSA infection. The antibiotic might have saved her life, but it has a side effect of renal damage.

As her kidneys failed, so did medication meant to stop the process. She was left waiting until their functionality declined to 10% to qualify for dialysis.

Dialysis helped, she said. At first, she’d sit for hours a day receiving her dialysis treatment. She’d bring her laptop and other materials and work on articles for the newspaper while she waited for the treatment to conclude.

The time away from her kids was difficult, she said. Since then, she’s received training and now does dialysis at night at home.

This has helped her see her family. She also has managed to put out a newspaper each week, declining to go on disability, as many dealing with regular dialysis do.

“My job and my kids are what keep me going,” she said. “My connection to the community, being able to see people and talk to them and tell their stories, that’s huge.”

Wagoner applied to get on the kidney transplant list. It involves a lot of medical tests and a lot of questions. She sat in front of a board to be interviewed before she was placed on the list.

When she first told people in her life of her need for a kidney, she had 11 friends and family volunteer to donate their kidney.

She’s down to two volunteers who might qualify. A variety of health factors winnow down kidney volunteers, such as high blood pressure. Now, she’s hoping to get others on her donor list to increase her chances of survival.

She’s working with KU Medical Center through the transplant process. She explained that she doesn’t have to have an exact match on blood type or the other various medical markers needed for a successful kidney transplant to occur, simply a willing, healthy donor.

With a donor coming forth, their kidney can be given to either her or another person awaiting a kidney. She can then receive a kidney from someone who matches her.

Think of it like a kidney co-op where kidneys are pooled.

A larger pool increases the chance of people on the list finding kidneys that work for them. Once matches have been made, all the donors and recipients undergo surgery at the same time.

According to the National Kidney Foundation, there are small long-term risks associated with donation. Once a kidney is donated, the existing kidney often grows, and donors return to about 80% of their total kidney function following the donation. Donors also can experience small increases in blood pressure in the years following the procedure. Should kidney failure occur later in life for a donor, they’re moved near the top of the donation list, waiting an average of 145 days for a transplant.

Giving a kidney also requires time off work, though the insurance company of the person receiving the kidney will pay for the medical costs of the procedure.

“I have the biggest health risk,” Wagoner said, noting that she still would be susceptible to infection.

If anyone is interested in donating a kidney for Wagoner, they should contact KU Medical Center and Wagoner’s donation team at 913-588-1227 and ask for more information about donating to Wagoner.

Following, the interview and testing process will take place to determine if the donor is eligible for the procedure.

“Anyone that is empathetic and cares about people should consider donating in general,” she said

According to Wagoner, her story isn’t special but just one of 100,000 separate stories of those awaiting transplant.

“We are all just waiting, and we want a chance,” she said.

This story has been reprinted with permission from the McPherson News-Ledger.

Is there a company similar to BeTheMatch.com that is for matching kidney donors and those needing a transplant? I was excited when I joined BeTheMatch but it's been almost two years and I haven't ever been matched. I'd love to join more of these registries but I don't really see anything else to join.