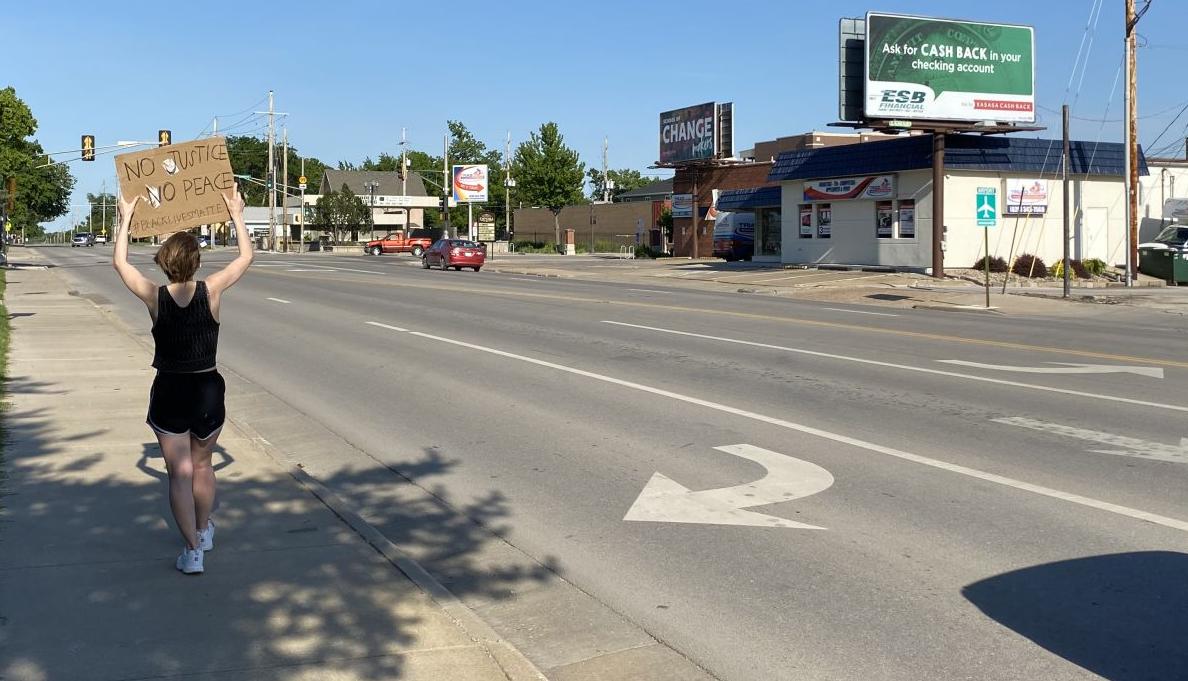 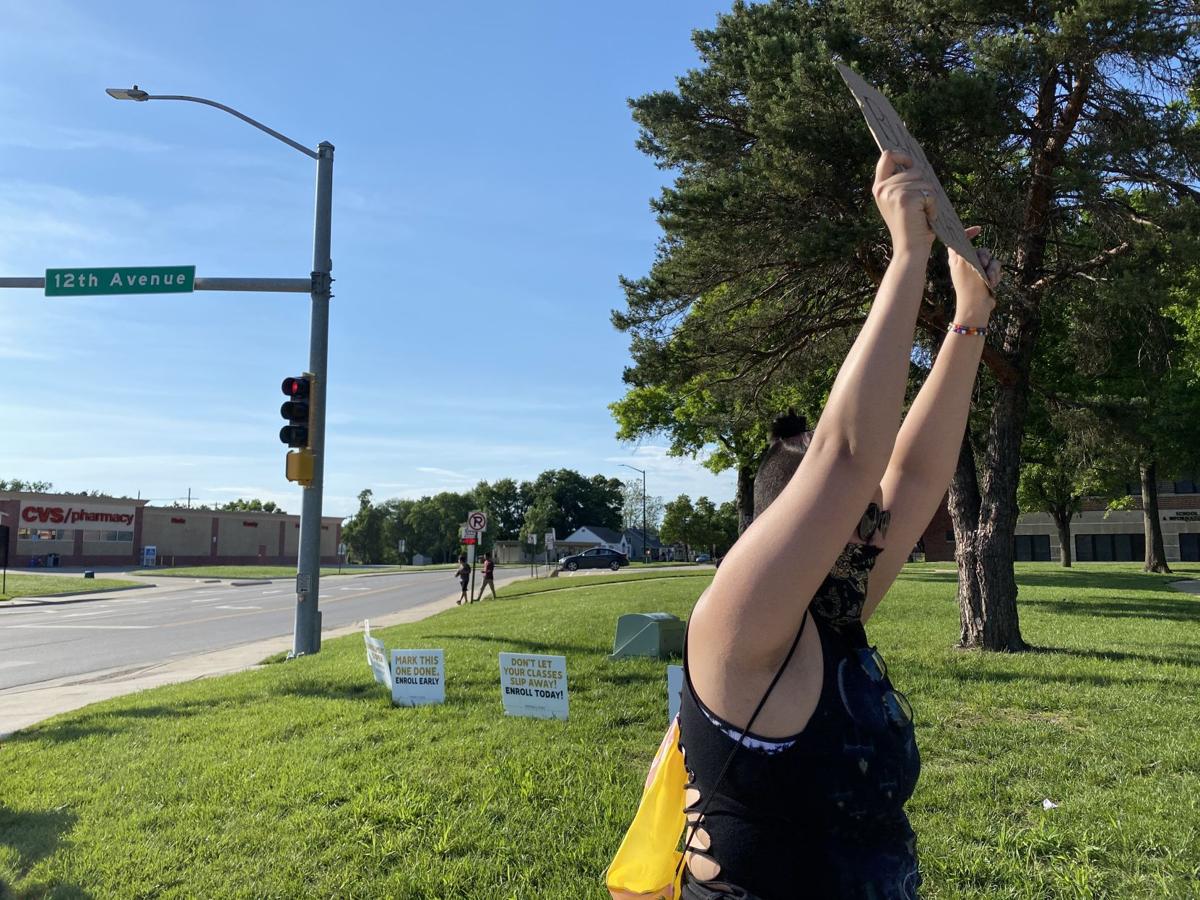 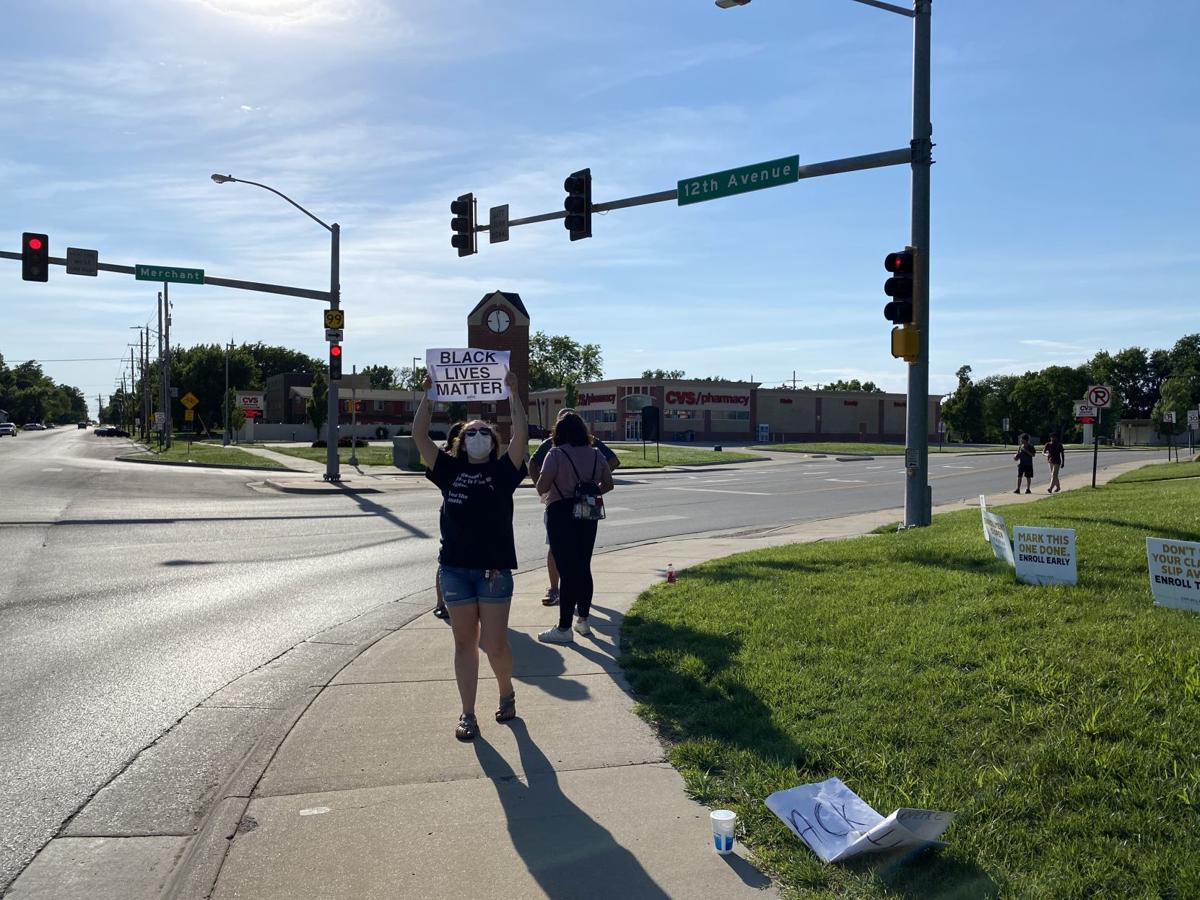 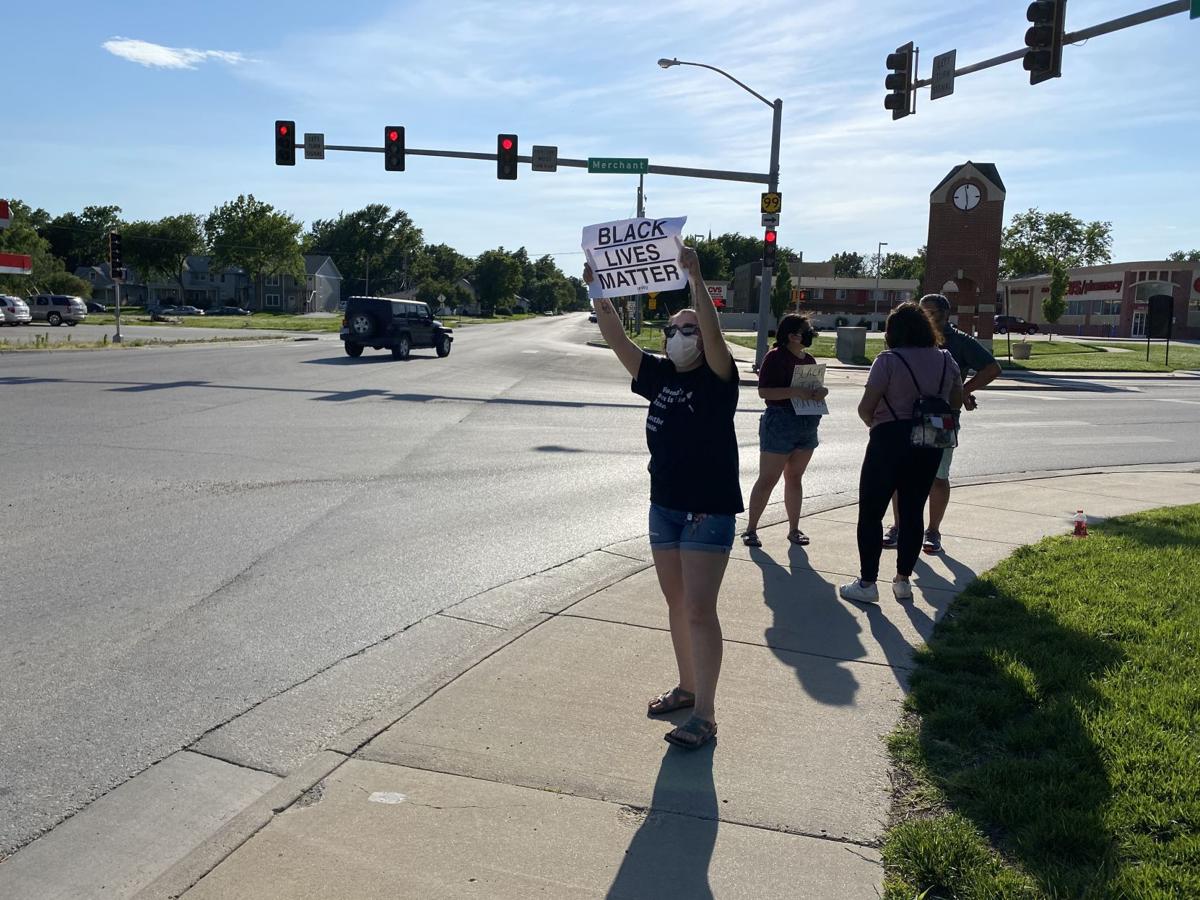 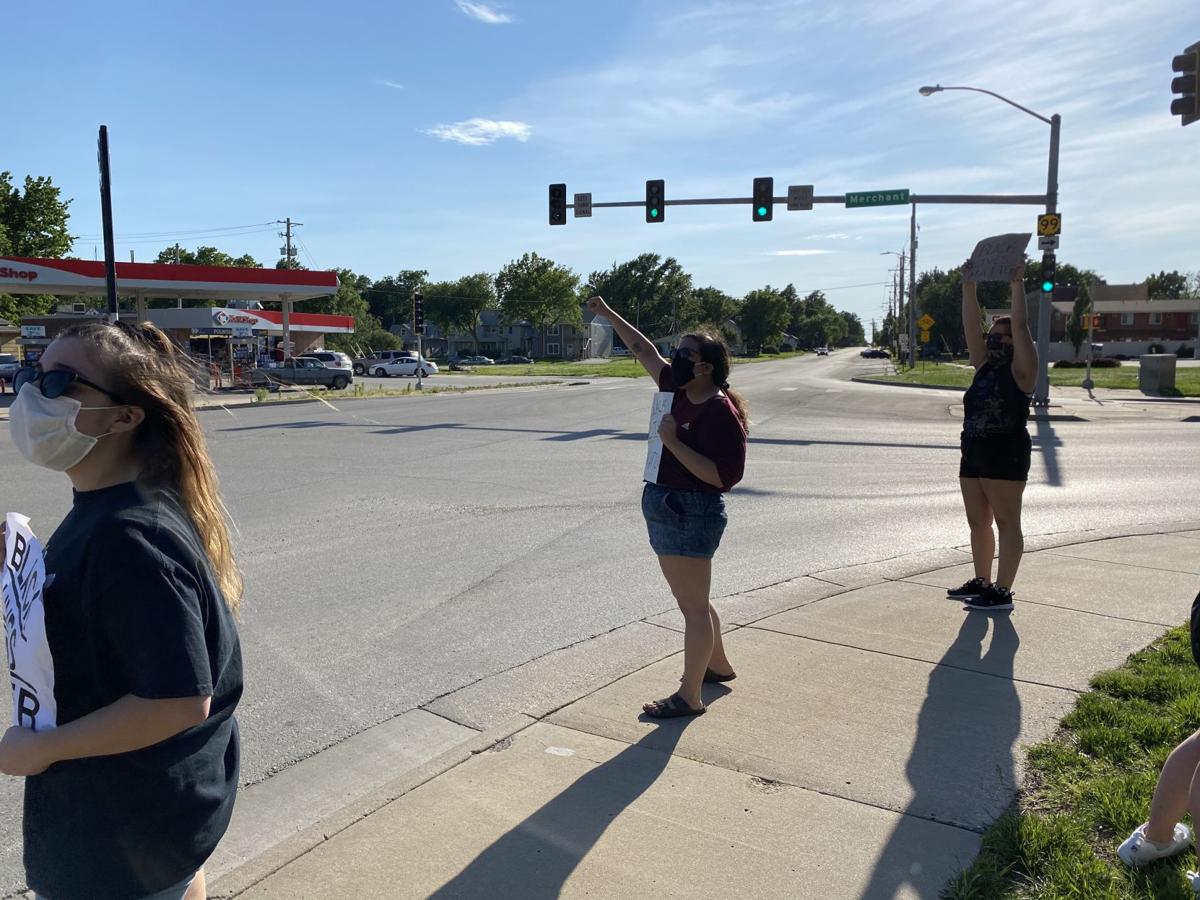 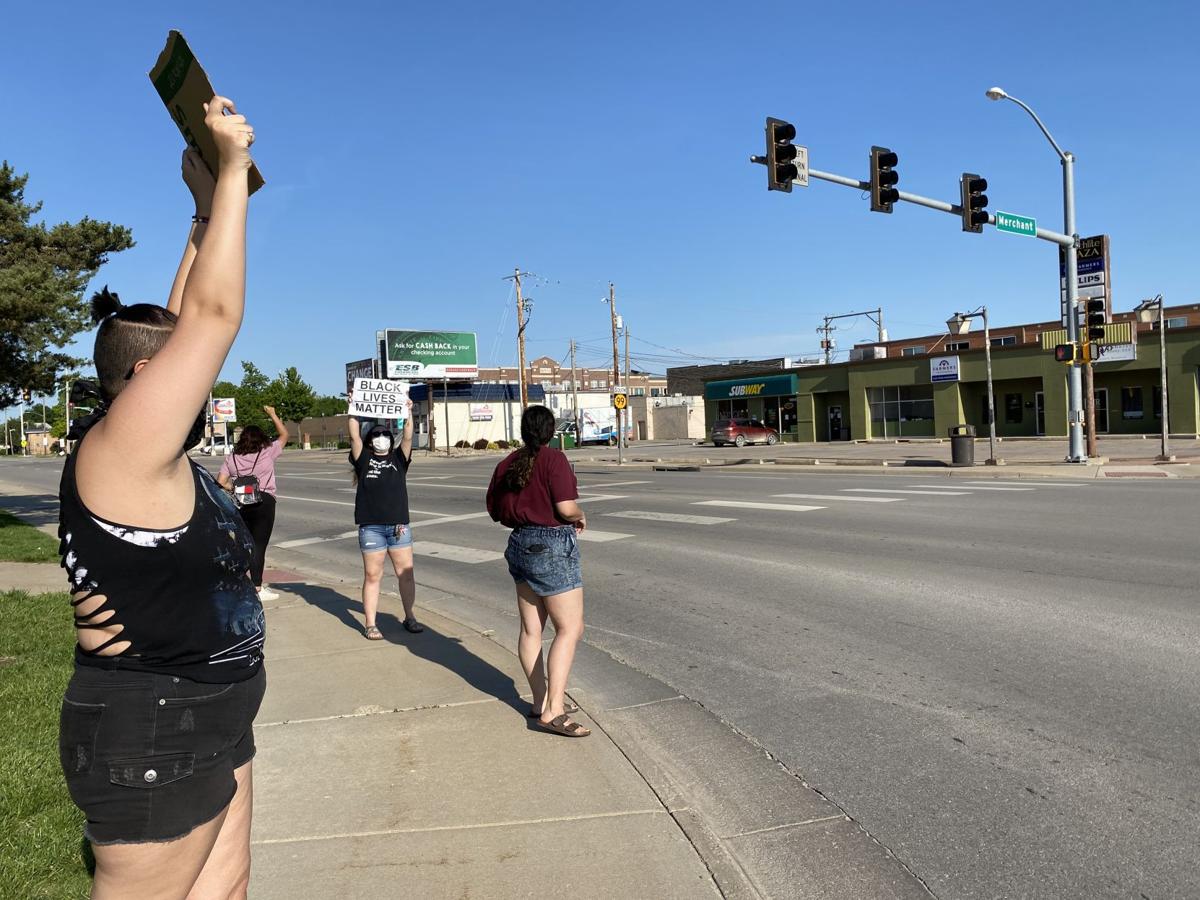 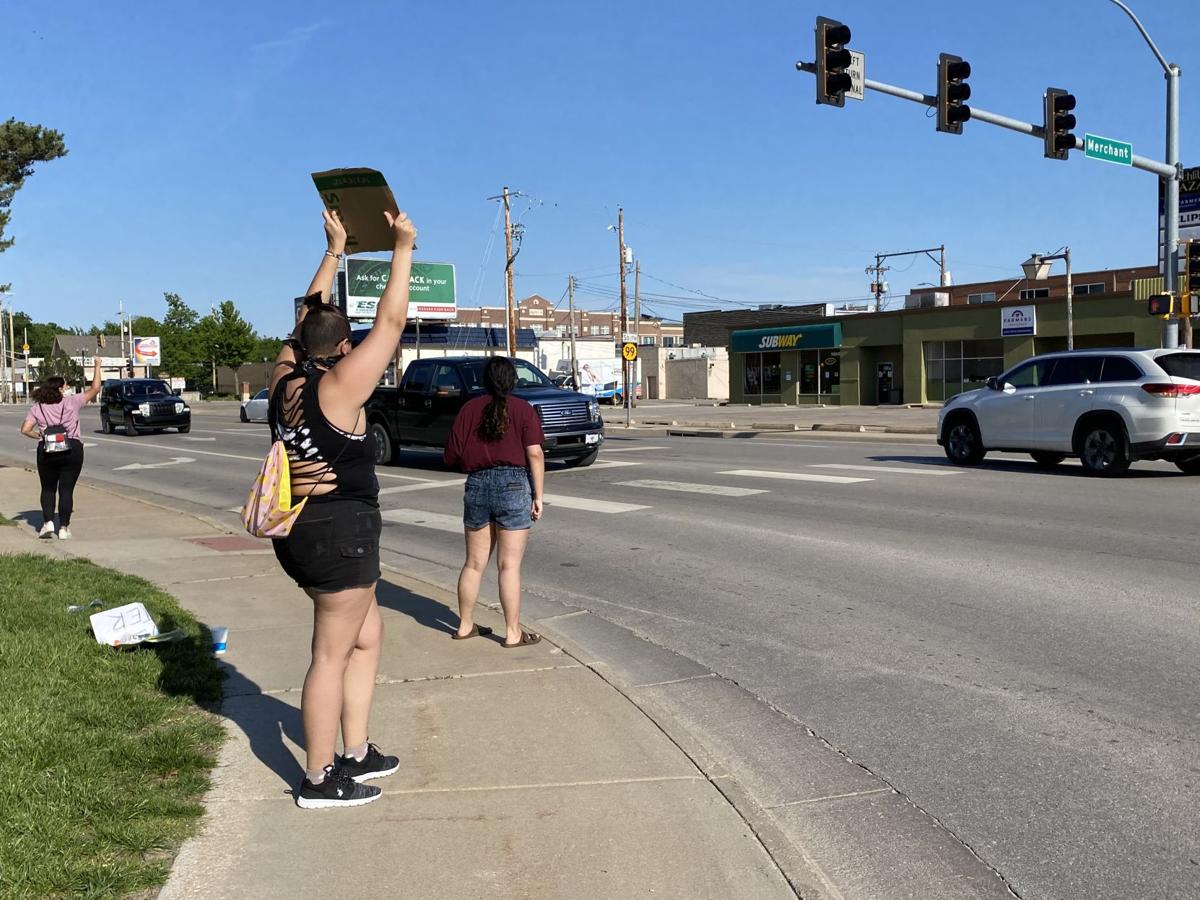 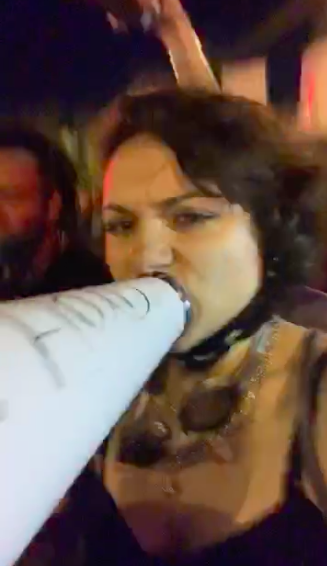 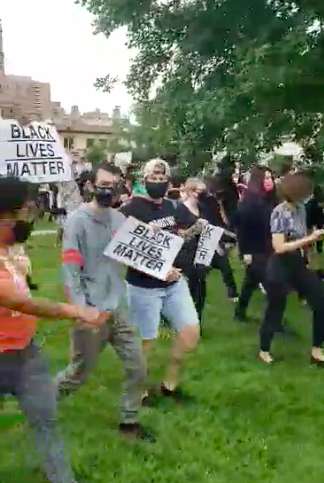 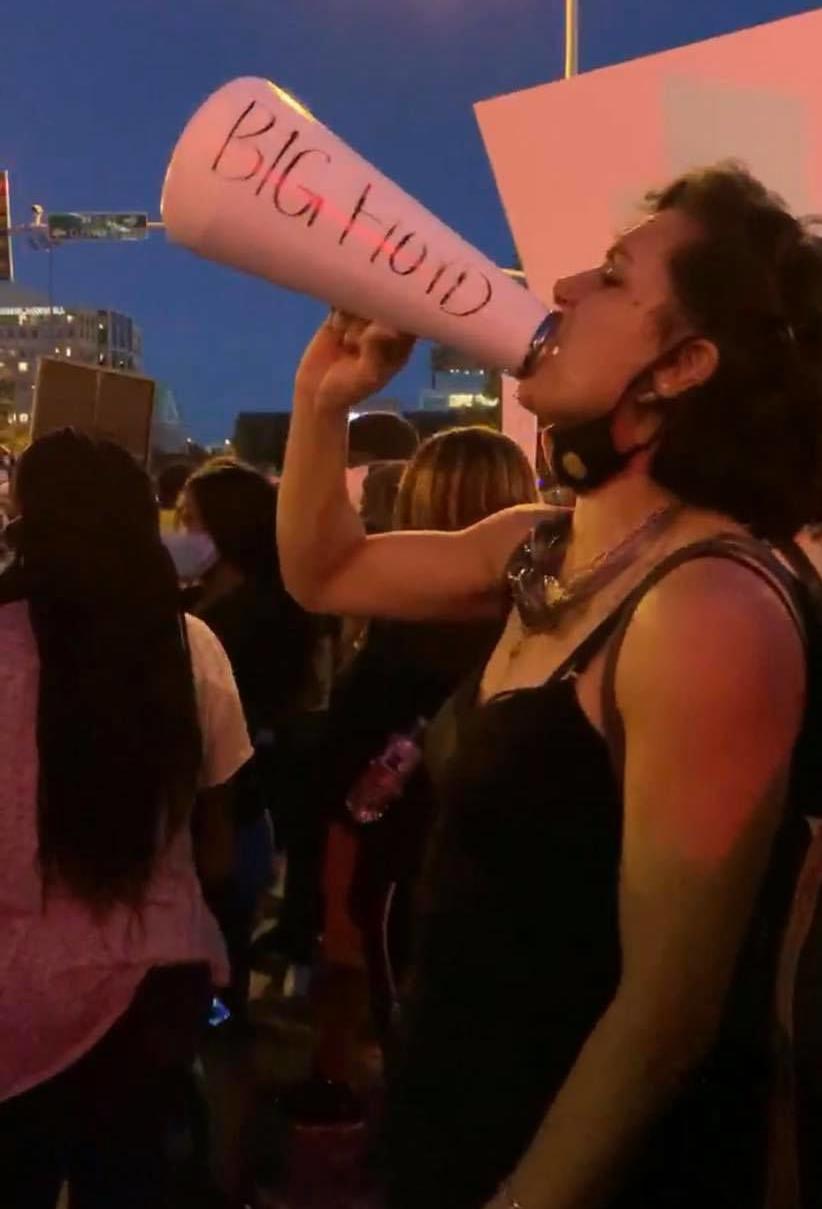 A small group of protestors gathered at the corner of 12th Avenue and Merchant Street to show support for the Black Lives Matter movement Sunday.

Carrying signs and using their voices, the group called on the community to remember George Floyd — a black man who died May 25 in Minneapolis after Derek Chauvin, a white police officer, used his knee to pin Floyd's neck to the ground during an arrest. Footage shows Chauvin keeping Floyd pinned to the ground even as the man pleads for air and eventually stops moving. He now faces murder and manslaughter charges.

Some cars honked as they passed the intersection, raising fists in solidarity or waving as they passed. Others yelled back, "All lives matter," a popular rebuttal used by some against the Black Lives Matter movement.

At least two cars stopped, offering the protestors bottles of water and even pizza.

Teddy Watson, who was the first one out with a handmade sign reading "Black Lives Matter" late Sunday morning, said she was inspired to do something after seeing other protests springing up around the country.

"I had been seeing protests happening in other cities and really felt like I needed to be there, but I realized that you don't need to be in other cities to bring change," she said. "I've heard so many accounts of my friends living in Emporia and people being racists toward them and it breaks my heart. Why not start where you live?"

Watson said she had never met any of the other protestors who came out to join her until that day.

"One person walked up to me and asked if she could join me and then next then I knew her roommate joined her," she said. "Then, more people I don't know have joined and I don't even know there names yet."

Watson said she was just a teenager when the Black Lives Matter movement first began after the death of Trayvon Martin in 2012. Her parents instilled in her the importance of listening to and supporting the black community.

"If you believe in something passionately, you need to be there voicing your opinion," Watson said. "As someone who is white presenting, I feel that I do have white privilege and I can use that to be an ally toward people who don't have a voice. My parents really ingrained that into me from a very young age. I think that's how we can bring about change with younger generations. Racism is learned, but so is speaking up against racism."

Emporia's protest was small in comparison to other gatherings in Kansas City and Topeka over the weekend.

In Topeka, several hundred protestors rallied at the Kansas Statehouse, protesting Floyd's death with T-shirts and chants that recalled the 2017 case of Dominique White – a 30-year-old Topeka resident fatally shot in September 2017 while running away from the two officers who had stopped him for questioning about shots fired at a park.

In Kansas City, the protest began Friday evening and has continued on for several days, with reports of vandalism and violence coming in.

Police restricted access to the popular County Club Plaza entertainment and business district early Sunday to allow business owners into the area. Local media reported that several businesses had broken windows, but damage estimates were not available. About 50 people were arrested and 10 others suffered non-life-threatening injuries as of midnight, Kansas City police spokesman Capt. David Jackson said. Police used tear gas to try and disperse the protestors, who threw more than rocks and bottles at officers and set fire to a police car.

Sakeena Agha was one of the several locals who traveled to KC to show support for the Black Lives Matter protest. She said what she experienced was something that began as a peaceful protest, with outsiders coming in trying to instigate violence.

Agha said it was important for people to understand that there are law enforcement officers who stand with the protestors. She believes the issue of police brutality is a systemic problem, that those officers who abuse their power should face charges.

"I do think it's really tragic that the ones who support the cause are either silenced by their own departments or are shamed or ridiculed by the public without being heard," she said.

"Right now, black lives don't matter in the United States," she said. "That's why Colin Kaepernick took a knee during the national anthem."

Another Emporian also shared their experience at Friday's protest.

"The people who were there for the cause were peaceful," Cory Bosiljevac, who also attended the protest on Friday, said. "Firm, proud and loud — but peaceful. There was a point where some people showed up and were trying to antagonize the protestors. like to ramp up a riot; almost to ruin what the protest was about. ... The outsiders are the ones who started the violence and broke stuff. The protestors were trying to get them to leave. That's why it got dangerous at the end.

"The police were respectful and did their job appropriately. I did not feel threatened by them. There was a diverse group of people there, all protesting for the same cause. That was the best part, the collective consciousness working as one."

At least two more protests are being planned for the Emporia area.

At 1 p.m. Friday, protestors will gather in front of Emporia State University and march to the Emporia Police Department. Participants are asked to wear facial coverings and practice social distancing.

Another is being planned for 4 p.m. June 15, according to Dereck Barnett, who said he is planning a peaceful gathering in honor of Floyd and all those "murdered by law enforcement." The plan is to march downtown, and details will be firmed up as permits are obtained.

“As someone who is white presenting, I feel that I do have white privilege and I can use that to be an ally toward people who don't have a voice.”

I think that this is right on target: "Agha encouraged people who do not understand why people are saying, "black lives matter," to think about it as people saying, "black lives matter, too." With what happened with Floyd, I do believe the majority of people, even those with racist tendencies, realize that was murder and should be dealt with accordingly. I do believe that the violent protesters are hurting the cause, but it does appear they are being bused in, so why the heck would it bother him to burn neighborhoods and then go back to their home state? If anyone watched the video and supports the behavior of the police officer............... Imagine trying to pass a counterfeit $20 and ending up dead in the street over it. Many unanswered questions concerning what happened, and we may never know the answers.

As long as they remain peaceful, protests are fine. But the looting and fires and tremendous property damage we have seen all over this country seems to be rooted in a lack of respect for anything related to the establishment. To burn down a dollar store that has been placed in the inner city for the convenience of those who live nearby makes no sense to me whatsoever. "No mob ever protected any rights, not even its own." Jesse Jackson

There are literally hundreds of videos from the past few days of the police kicking people who are on their knees, gassing crowds that are peaceful, casually pepper spraying people walking for no reason, arresting people who are just exercising their first amendment, shooting people with rubber bullets while they have their hands up, even shooting medical staff and news media. I think the lack of respect you see is a response to their feeling of hopelessness. It doesn't make it right, but they really have no other recourse.