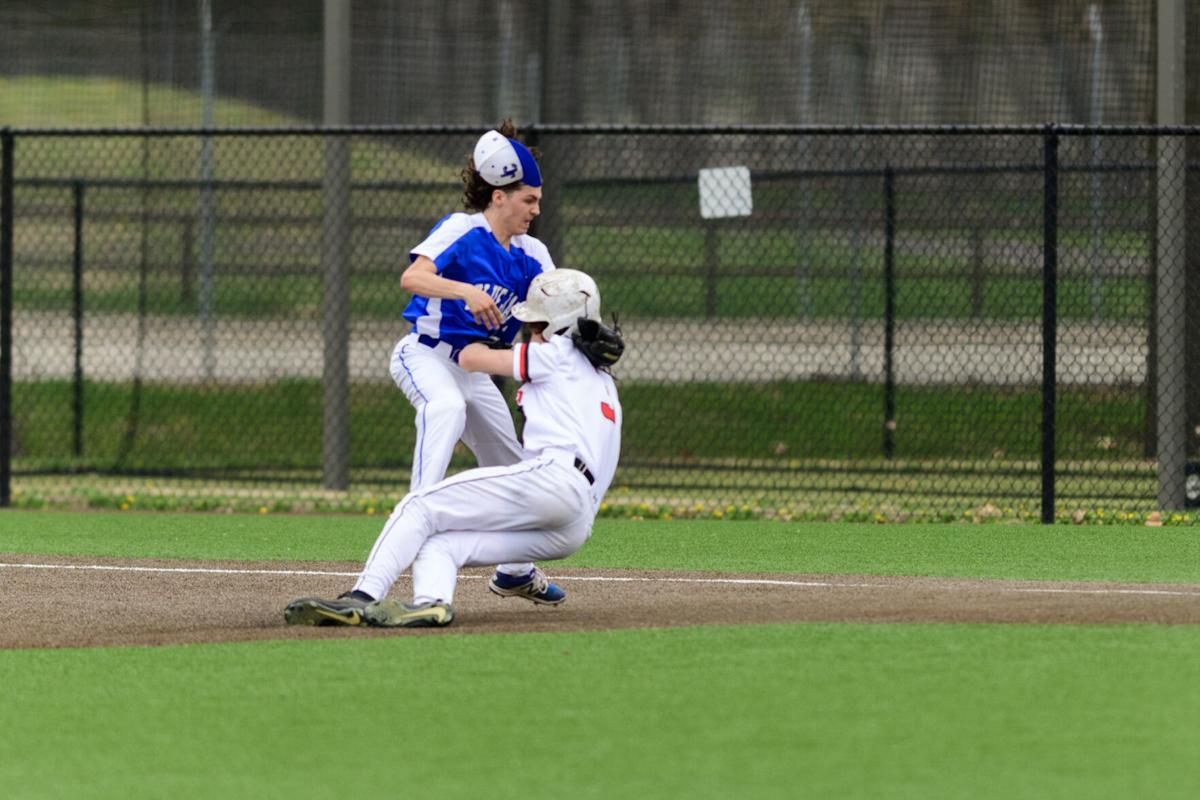 Emporia's Camden Kirmer collides with Junction City's Trevor Laughlin during a run-down on the base path. 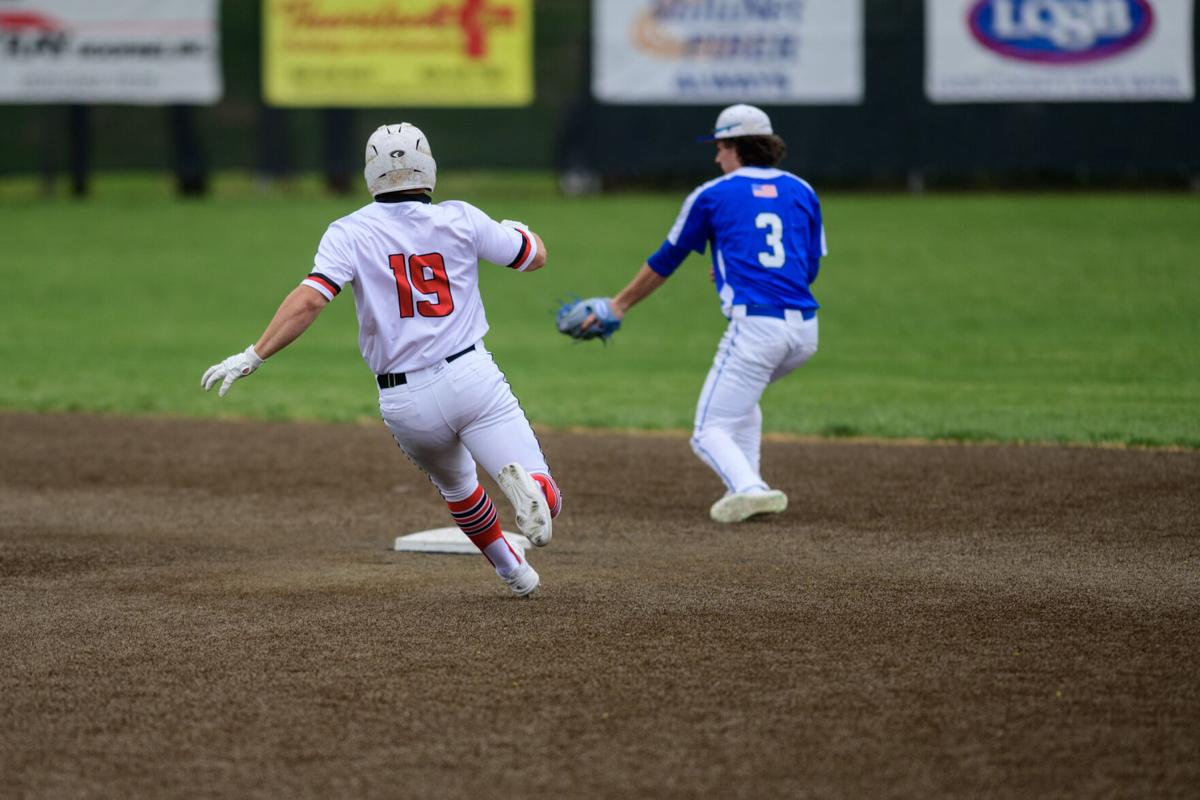 Logan Thomas slides into second on one of his two doubles in Emporia's first game against Junction City on Tuesday. Thomas also hit a triple and a single in the game. 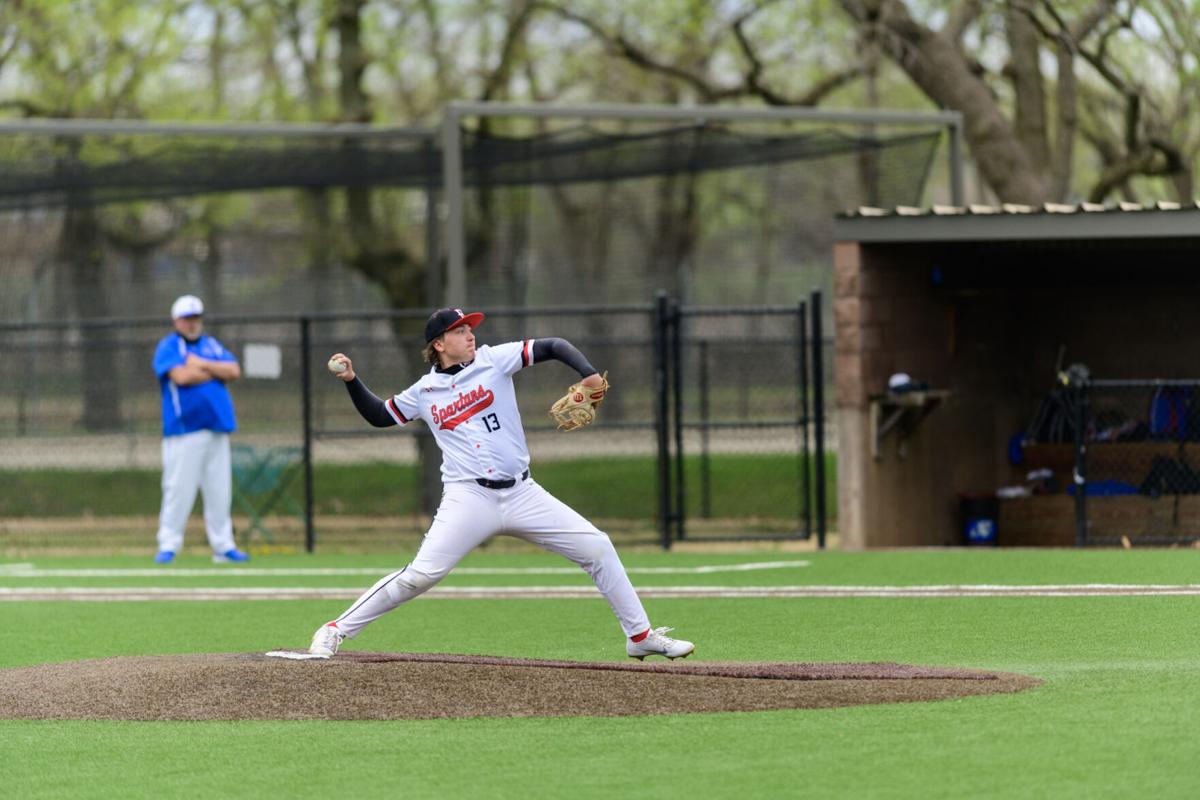 Vance Kinsey got the start on the mound for the Spartans in game one against Junction City.

Emporia's Camden Kirmer collides with Junction City's Trevor Laughlin during a run-down on the base path.

Logan Thomas slides into second on one of his two doubles in Emporia's first game against Junction City on Tuesday. Thomas also hit a triple and a single in the game.

Vance Kinsey got the start on the mound for the Spartans in game one against Junction City.

Errors and walks were the monsters under the Spartans’ bed on Tuesday afternoon as Emporia dropped game one of its doubleheader with Junction City 9-5 in eight innings.

With the game tied at three with two outs in the top of the seventh, a Spartan fielding error on what should have been a 5-3 put-out to end the inning allowed the go-ahead run to score and extended the frame. Junction City would plate another to send the game to the bottom of the seventh with a 5-3 lead.

Emporia loaded the bases after a pair of two-out walks earned by Kadyn Williams and Vance Kinsey was followed up by an infield single by Logan Thomas. Another single by Bobby Trujillo drove home Williams and Kinsey to force extra innings.

In the top of the eighth, Junction City’s Jordan Kell reached first on a dropped third strike, Nate Rumbaugh reached on another Spartan fielding error and Logan Lindsley walked to load the bases with nobody out. Two hits and a walk later, Junction City led 9-5.

With work to do, Emporia began the bottom of the eighth with a walk by Chance Gilpin, but that was followed by a strikeout and back-to-back groundouts to second base to end the game.

In total, the Spartans surrendered seven walks in the game. Four of Junction City’s nine runs were unearned and four baserunners who eventually scored reached first via the base on balls. Additionally, one run was driven in by a bases-loaded walk.

“We’re not a flashy team and I think if we walk that many guys and then make errors with two outs, I think walks and two-out errors can really win or lose you the game,” said Spartan head coach Anthony Markowitz. “Some of those plays were not your average play, but I think they’ve got to be made for us to be able to win games.”

Thomas tallied half of Emporia’s eight hits in the game, going 4-for-4 from the plate with two doubles, a triple and a single. He also drove in a run.

“Logan [Thomas] has been hitting the ball well,” Markowitz said. “Every time he comes up to the plate, he’s on time. We talk to our guys about hitting, we’ll make a few minor adjustments with them, but if they’re on time and they’re in the hitting position at the right time, then it’s just hand-eye coordination and good things can happen. That’s what he’s bought into and he does it and he squares the ball up and swings at strikes.”

No other Spartan had more than one hit.

“We’ve got to find a way to keep competing at the plate, throughout the course of the game,” Markowitz said. “I thought we did a great job in the first inning and then I thought we did a great job in that seventh inning to tie it, but you can’t rely on that every night. You’ve got to be able to put up runs every inning and keep putting pressure on the other team. I don’t know that Junction City felt any pressure from us, even when we did kind of have the momentum going in that seven inning.”

Vance Kinsey got the start on the mound and allowed three runs (two earned) on four hits and four walks while striking out three.

Kaidyn Williams pitched the eighth inning and took the loss, giving up four runs (three earned) on three hits with two strikeouts and two walks in that one inning.

It was all Junction City in the night cap of Tuesday’s doubleheader as Blue Jay pitchers put the clamps on Emporia’s batters all game long en route to a 13-4 win.

Junction City scored two in the first and six in the second to set the tone for the game.

Down 10-1, Emporia threatened in the bottom of the sixth, scoring two runs before leaving the bases loaded.

The Spartans managed just seven hits, two of which were immediately erased by double plays initiated by the next batter in the lineup.

Cam Geitz got the start on the mound and was the losing pitcher, giving up eight runs (seven earned) on four hits along with five walks and two strikeouts. Three other pitchers made appearances but they struggled to find ways to shut down Junction City’s offense.

“I think our [lack of] pitching depth was a little on display tonight and that’s obviously got to be a fix for us if we want to compete playing doubleheaders and four games a week,” Markowitz said.

Seven Spartans collected hits but none gathered more than one.

Markowitz said that he needs more buy-in from his players during practice in order to have more success the rest of this season.

“We’ve got to find a way to just be more competitive in practice and find a way to get guys to do the right things for the whole two hours that we’re out here at practice,” he said. “I think that we have guys that sometimes try to find ways to get out of reps and not try to take as many reps as they can. We’re not going to beat anybody with raw hitting or just blowing it by somebody on the mound. We’re going to have to find a way to be just the solid team that gets it done and gives themselves a chance at the end of the game.”

The Spartans fell to 2-2 on the season. They will head out on the road for the first time this season against Hayden on Friday.