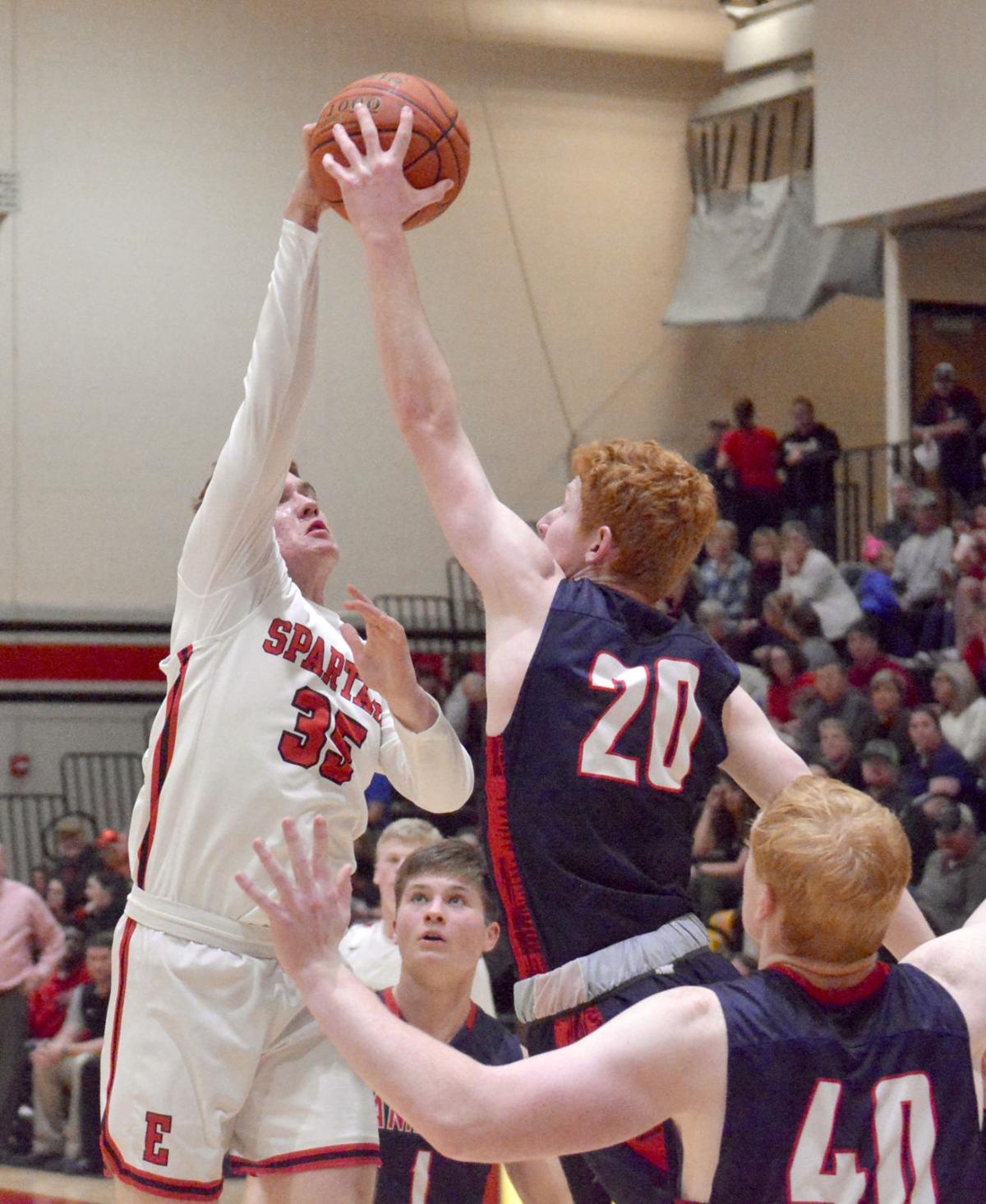 Manhattan’s Mitch Munsen (20) gets his hand on a pass from Emporia’s Skyler Douglas (35) on Tuesday night. 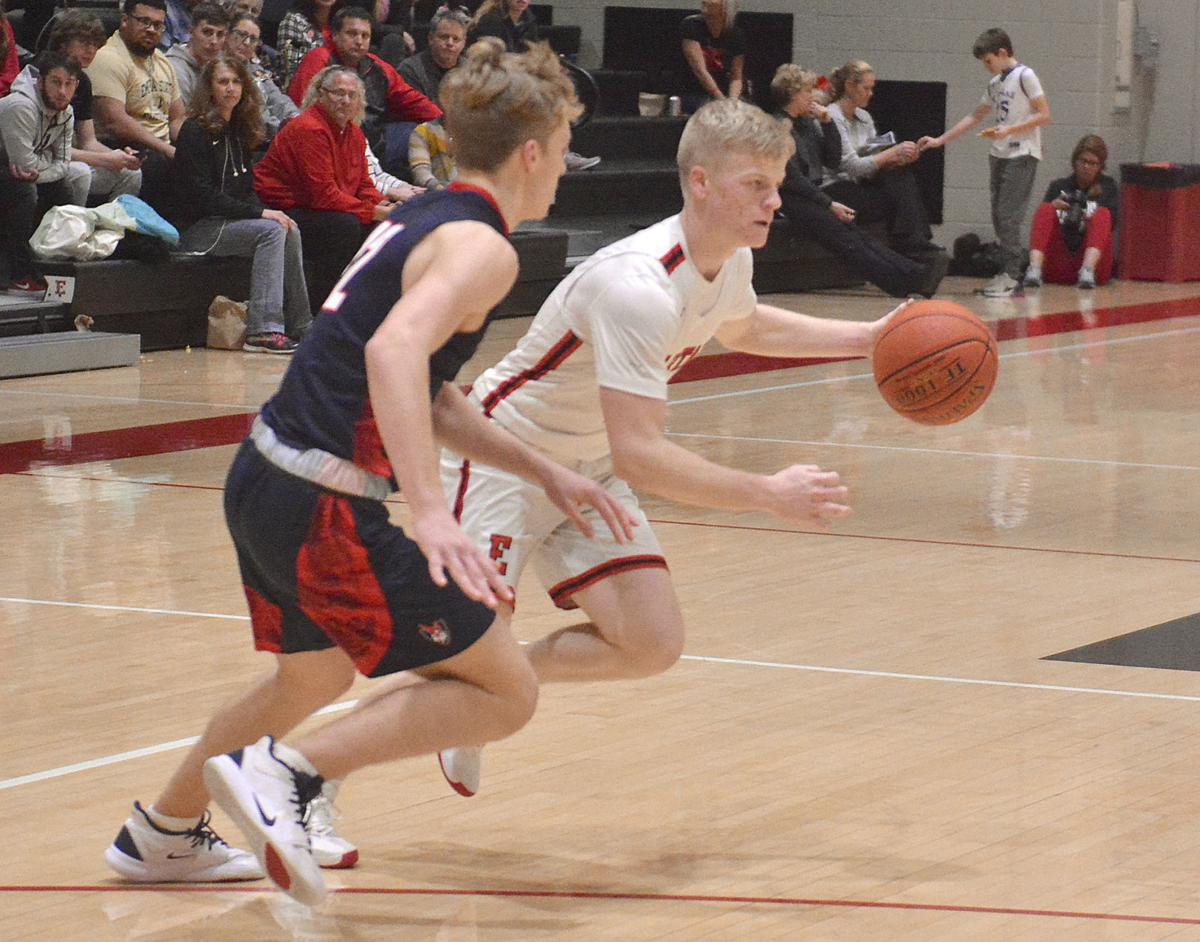 Connor Hoyt (2) looks for an opening against Manhattan's defense on Tuesday night. 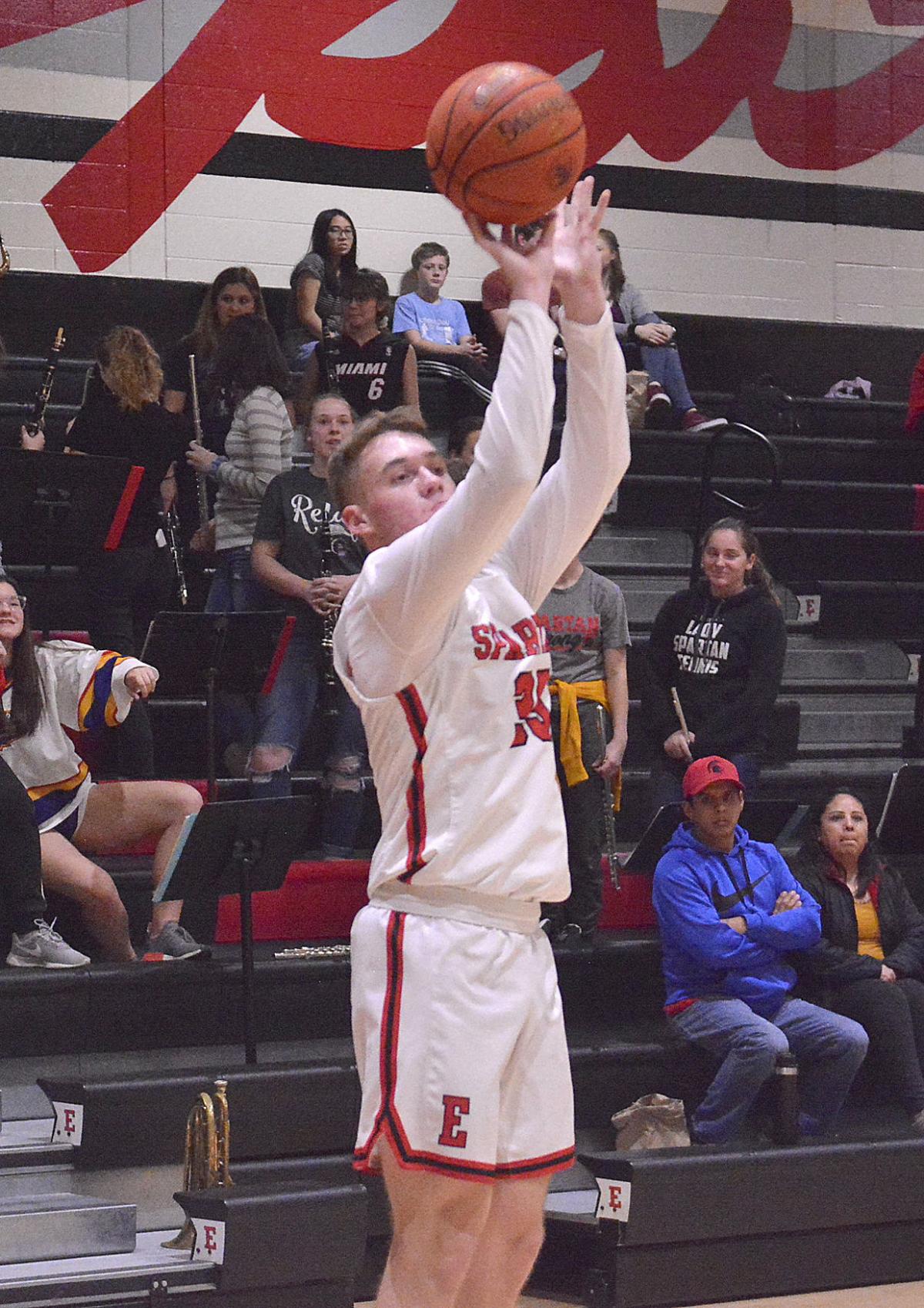 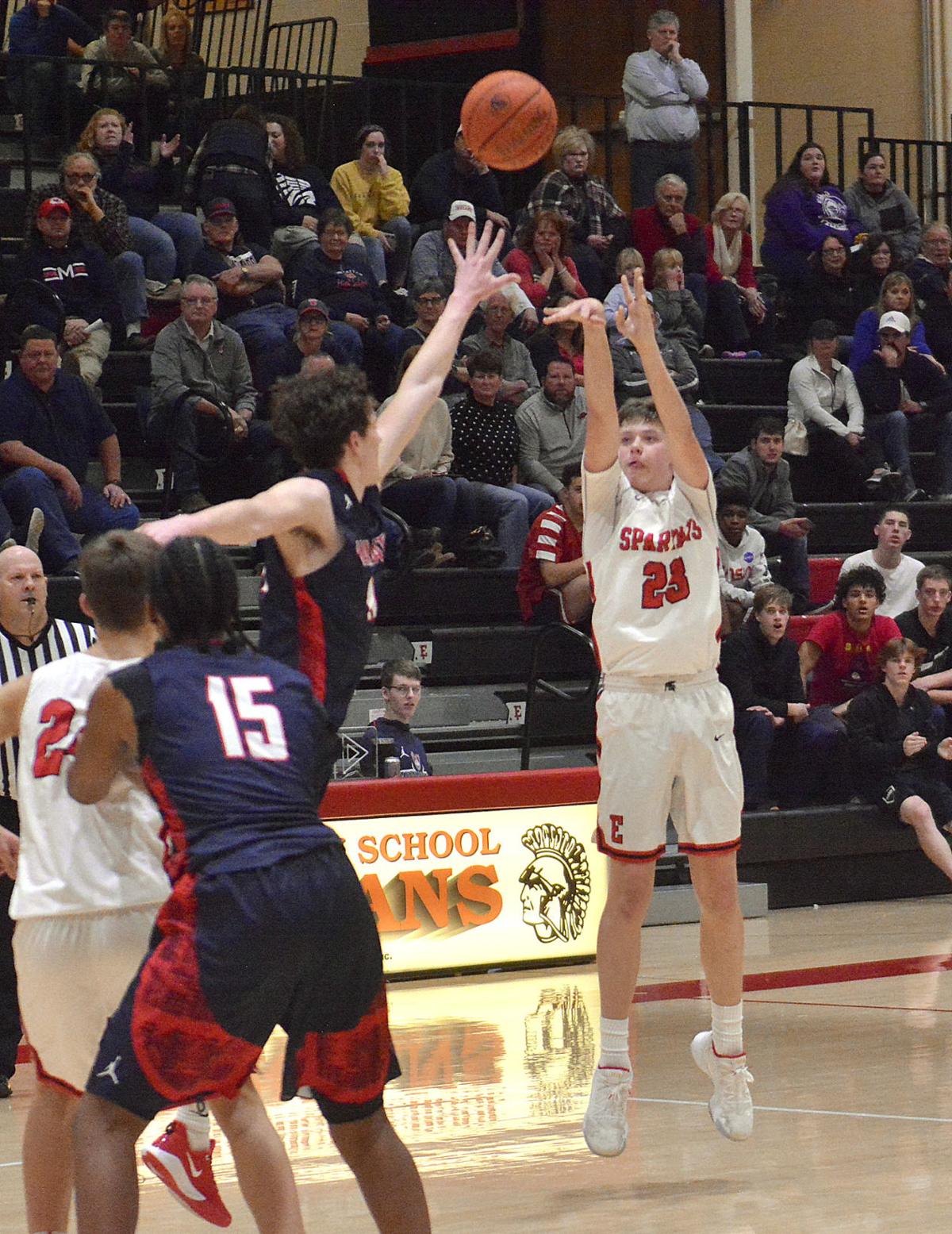 Chance Gilpin (23) shoots the ball during the Spartans' 62-55 loss to Manhattan on Tuesday.

Manhattan’s Mitch Munsen (20) gets his hand on a pass from Emporia’s Skyler Douglas (35) on Tuesday night.

Connor Hoyt (2) looks for an opening against Manhattan's defense on Tuesday night.

Chance Gilpin (23) shoots the ball during the Spartans' 62-55 loss to Manhattan on Tuesday.

As the first quarter came to a close Tuesday night, it looked as though it may be a very short — and yet very long — night for the Emporia High boys.

Without leading scorer Charles Snyder, who was away due to illness, the Spartans were repeatedly blocked and generally stifled in any offensive approach by the widely lengthier Manhattan lineup.

E-High stayed the course, however, cutting an early 15-point deficit to just two in the third quarter, but eventually falling by a 62-55 margin to the Indians.

“Our guys are competitive,” Welch said. “We want to win that game and definitely gave ourselves a chance.”

Eventually, the Spartans did just that, but the first quarter gave other ideas as the Indians went on the attack early on against the Spartans’ zone defensive alignment, finding quite a bit of success.

So in the second quarter, already facing a 25-10 deficit, Welch changed things to more of a man-to-man defensive scheme, which certainly helped balance things.

“We had to gamble a little bit in the second quarter and pick them up (in) man and had to play without fouling,” Welch said. “That’s why we play a lot of zone, because we want to keep guys fresh, keep them on the floor. I didn’t think we were great (in the second). I thought (in) the third and fourth quarter, we got better, we were able to get some stops and create some turnovers to keep us in the game.”

Though the Spartans didn’t gain much ground before halftime, they at least got some offensive traction while speeding Manhattan into making more mistakes. By halftime, the deficit was nine.

It was the third quarter that E-High made its biggest push. Skyler Douglas opened the scoring with a 3-pointers and after a pair of buckets from Manhattan, Douglas and Beau Baumgardner both made treys to cut it to a 43-39 ballgame. Douglas and Hoyt scored on layups to drop the gap to a 45-43 margin, but the Indians stretched their lead back a pair of baskets to close out the quarter, both coming on Spartan turnovers.

E-High kept pace the rest of the way, but never got closer than the four-point deficit that the quarter started at.

In lieu of Snyder’s absence, Baumgardner and Douglas did some hefty lifting, scoring 21 and 18 respectively. The Spartans overall were about as effective shooting the ball as as they had been all year.

“Really, we didn’t ask them to do anything we don’t (already) ask of them,” Welch said. “Skyler made some shots tonight, which was great to see. Beau hit some shots tonight. Hopefully we can use this game to catapult us (forward), get healthy, get whole and continue to get better.”

Whether Snyder’s absence will be simply one game or longer, Welch said his team needs to approach it the same.

“I think we just need to play, guys just need to play and get comfortable. We didn’t change anything ... now a couple guys maybe played in different spots, I think it’s just playing and seeing the ball go through the rim, playing long minutes, taking care of the ball, getting stops. The game doesn’t change, we’ve just got to get comfortable and gain some confidence.”