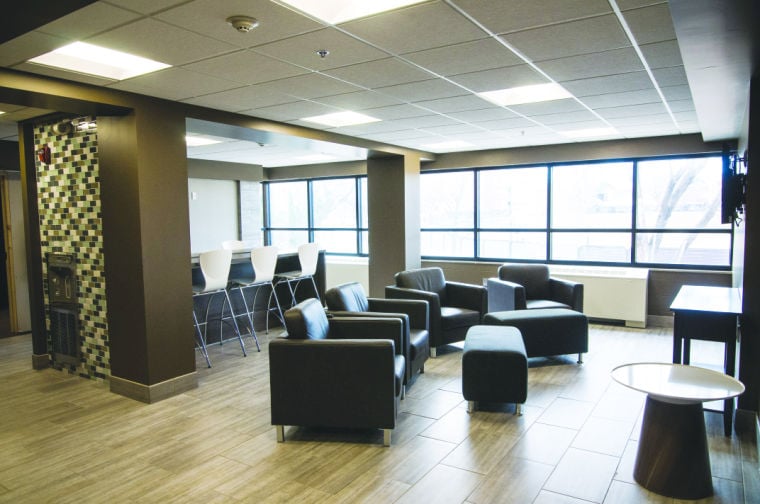 The first floor common area of the newly renovated Trusler Hall sits empty on Tuesday afternoon as ESU students work to move into their rooms in the residences. The hall, built in 1963, has been under renovation since 2012 and was recently opened for the first round of students to move in. 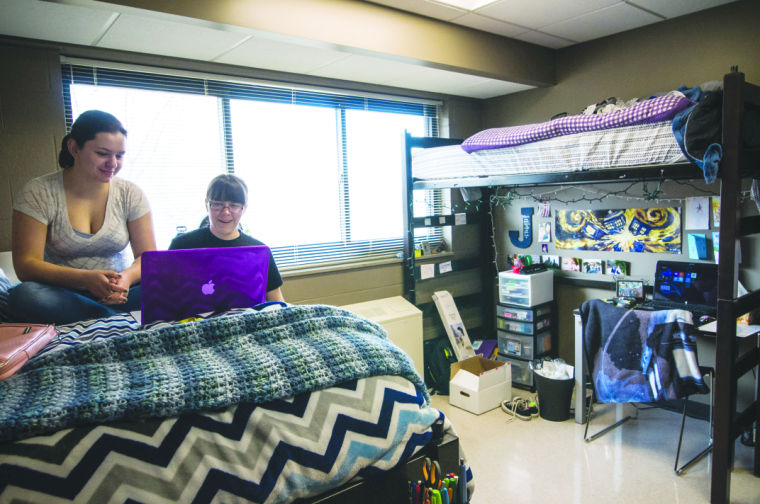 Oksana Spindler (left) and Jamie Henry sit in their new dorm room in the newly remodeled Trusler Hall at ESU. Overall, the students said they like the new facility, but had concerns about desk storage space and a few other small things.

The first floor common area of the newly renovated Trusler Hall sits empty on Tuesday afternoon as ESU students work to move into their rooms in the residences. The hall, built in 1963, has been under renovation since 2012 and was recently opened for the first round of students to move in.

Oksana Spindler (left) and Jamie Henry sit in their new dorm room in the newly remodeled Trusler Hall at ESU. Overall, the students said they like the new facility, but had concerns about desk storage space and a few other small things.

The difference between Singular Hall and the newly renovated Trusler Hall in the Towers Complex on the Emporia State University campus was voiced by students as they moved in Tuesday.

The original cost for the remodel of both halls was projected to be $5.4 million. That figure has recently been revised to $5.25 for both halls.

The first phase of the remodel, which was the renovation of Trustler Hall, cost $2.92 million. The remaining cost for the completion of Singular Hall and first floor common areas is $2.33 million.

“If you go to Singular and go for a walk over to Trusler, you’ll see it’s literally a game changer,” said ESU President Michael Shonrock. “What a difference: the environment, the opportunity for students, the interaction, just the expressions on their faces.”

The major push has been to move around 100 students, who lived in Singular last semester, over into the recently finished digs. The renovations allowed for some additional rooms in Trusler Hall, and now there are around 115 students living on the other side of the complex.

“… Especially when they walk into the bathrooms for the first time and see these huge showers and glass tile and really high-end finishes that you usually don’t expect in a residence hall,” he said.

Trusler Hall, aside from being painted and redesigned in a more modern style, now features five floors and 12 student rooms that can accommodate 24 residents and one resident assistant on each floor for a total of 125 residents.

There is a lounge on each floor, soon to be equipped with a 40-inch flat screen television, and furniture. Each room has a sink and vanity with a mirror and built in cabinet. They also feature moveable furniture: an extra-long twin bed and mattress, wardrobe, desk and desk chair.

There are two laundry rooms with 12 washers and dryers, which is double what the laundry rooms offered previously. The buildings are equipped to provide wireless Internet with two ethernet connection ports in the rooms, five outlets and free laundry and cable television.

Jamie Henry and Oksana Spindler, freshmen at ESU and previous tenants of Singular, said they liked the renovations, but they had some gripes about the desks. They wished the desks had drawers instead of just flat surfaces. Both students said they keep their books on the floor because there isn’t a place to put them.

“The paint was really cheap, apparently, because if we put command hooks on it, they rip off the paint, and then we get charged for having ripped off paint,” Spindler said. “Some of our friends have already done that.”

The students said they paid no more than $2,000 including all expenses to live in the residence halls. They are eager to use the new common areas for meetings when floor plans and safety procedures are discussed.

Of course, taking showers is easier, they said, because they are larger.

Trusler Hall, built in 1963, has been under renovation since May of 2012. Singular Hall, built in 1959, will go offline Thursday and undergo a similar renovation. When completed Singular will have nearly the exact layout as Trusler, but will accommodate less: four floors holding 86 residents and four residential assistants.

The ground entrance and areas at the entrances on each floor will be renovated toward the end of the Singular project.

“One, this is a great way to help recruit and retain students,” Shonrock said. “Students make choices, and they do look at their living environments, so we want to make sure we provide the very best opportunities for those students that are here.”

The entire complex accommodates around 600 students.