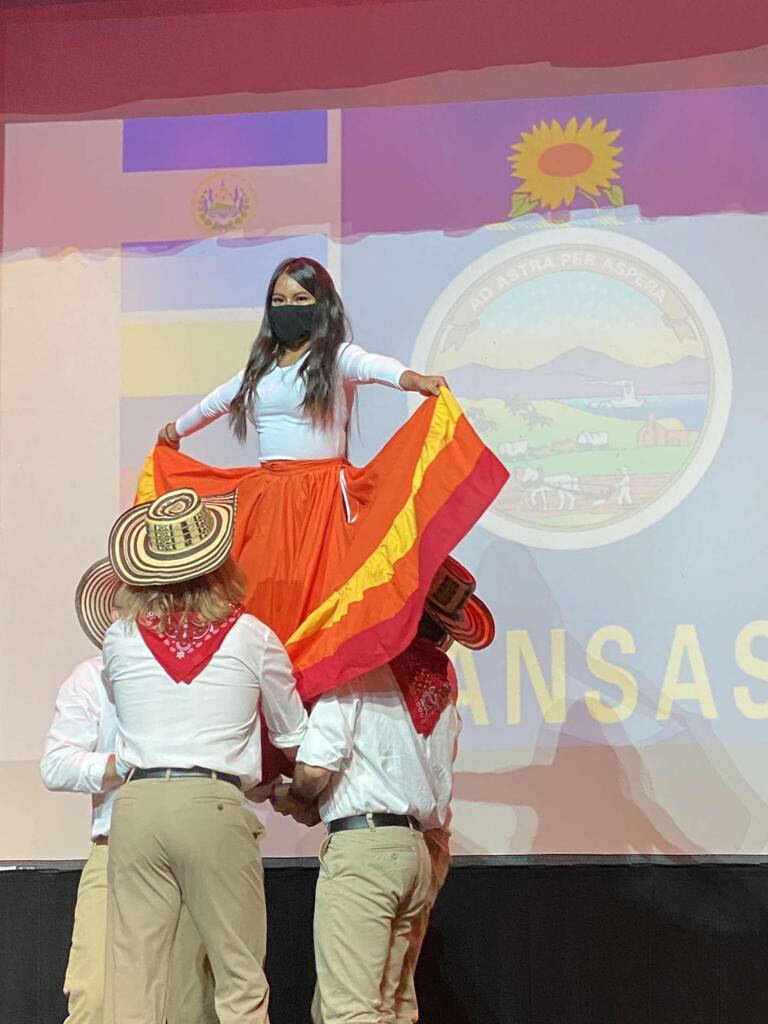 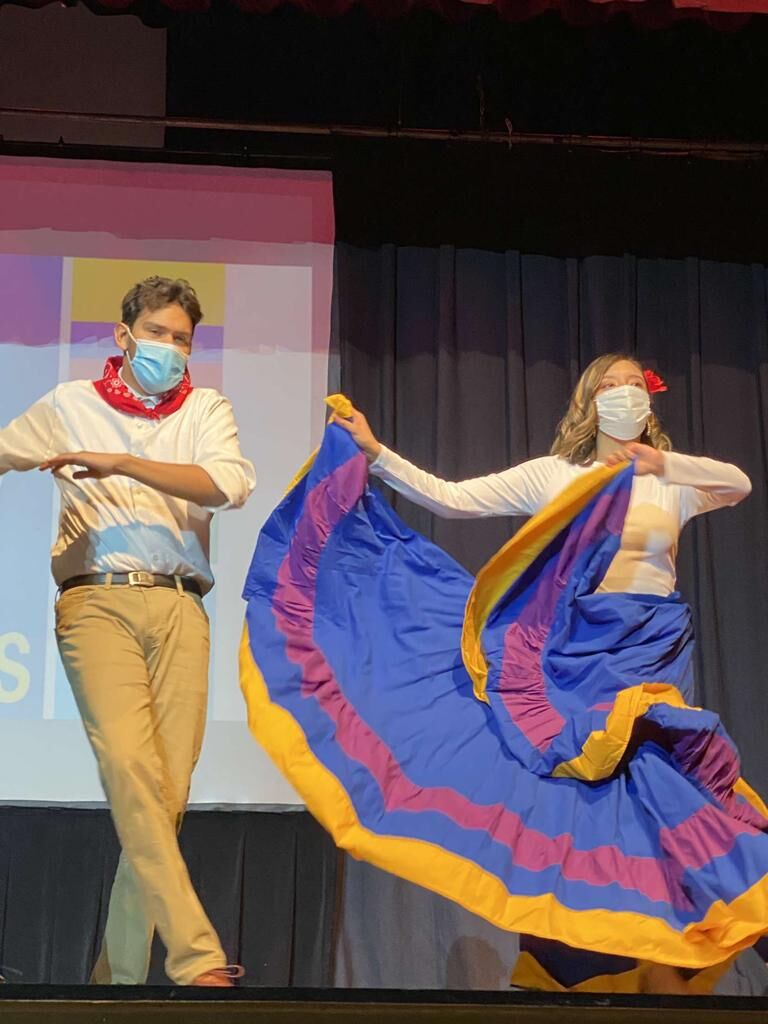 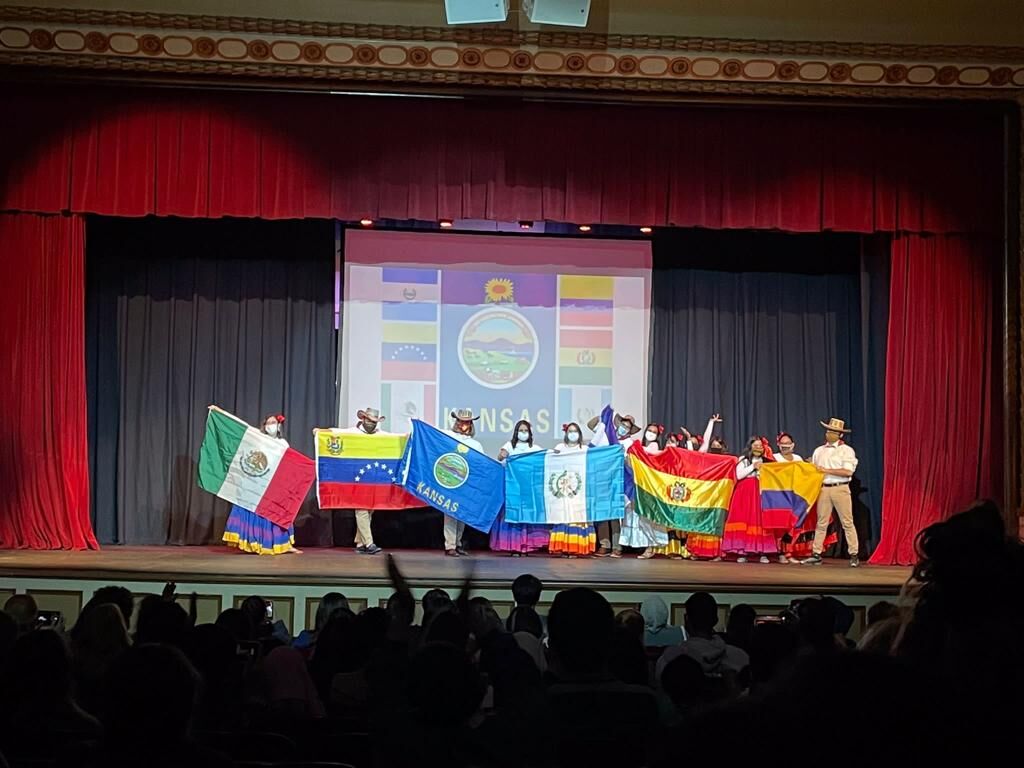 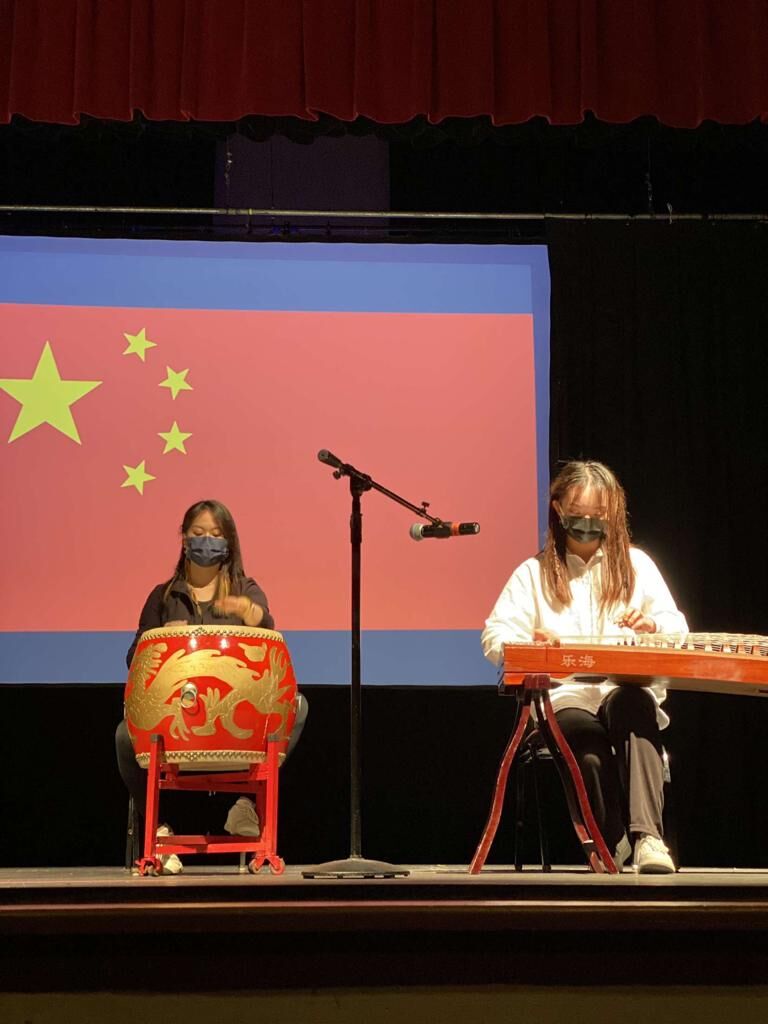 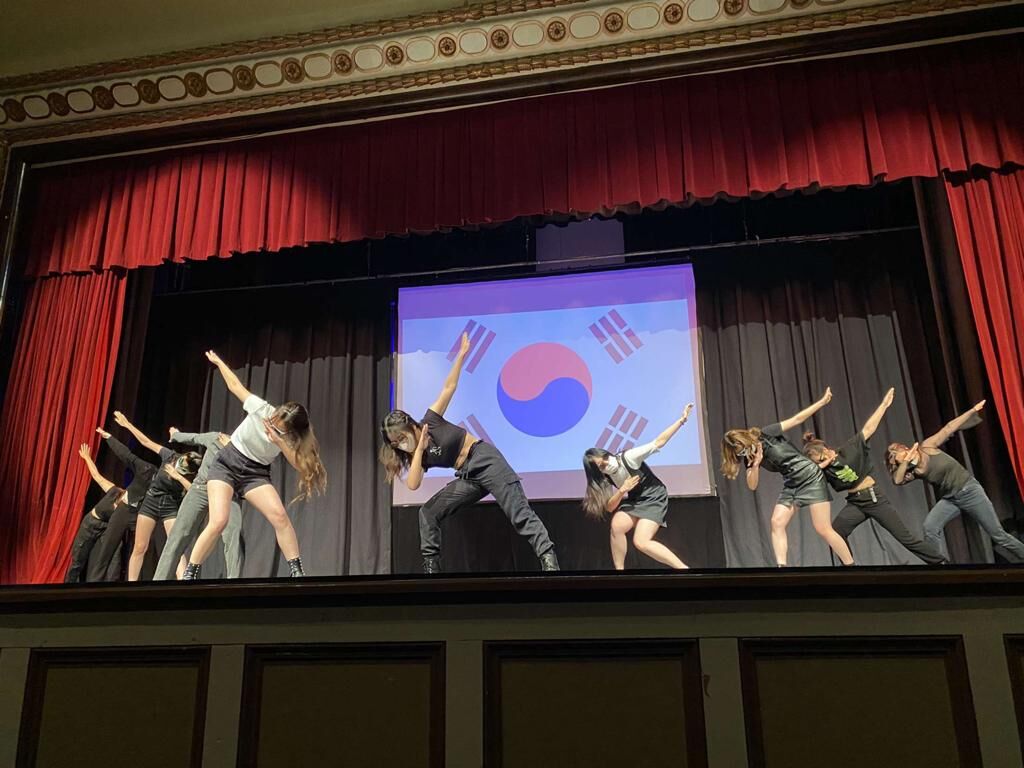 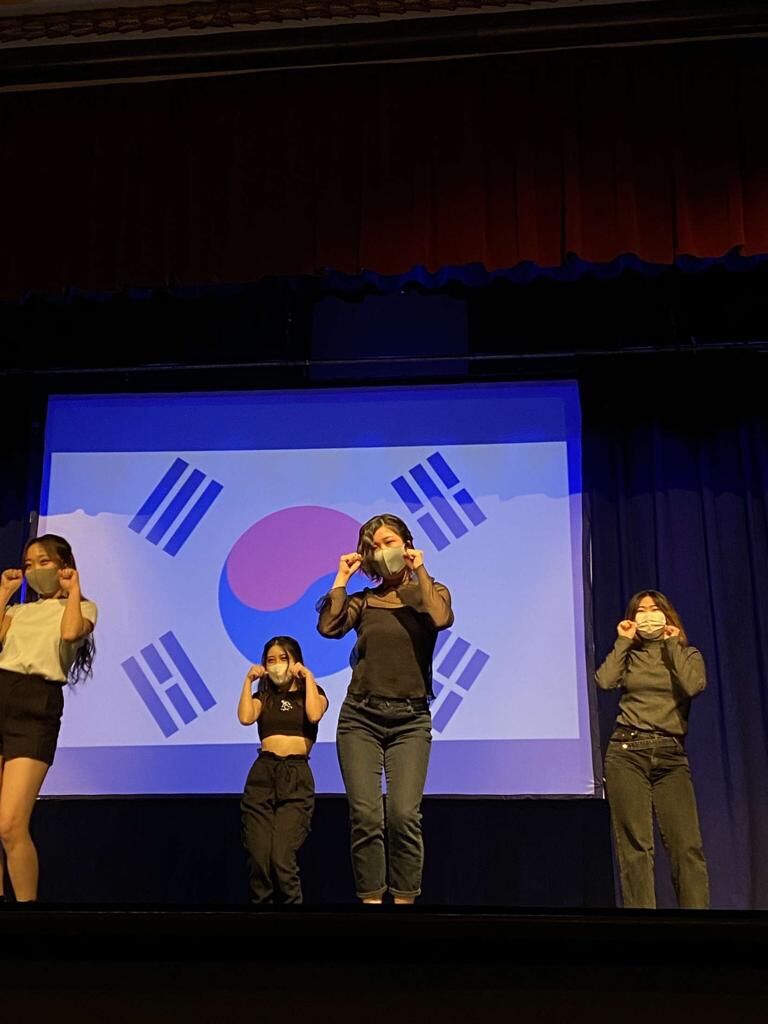 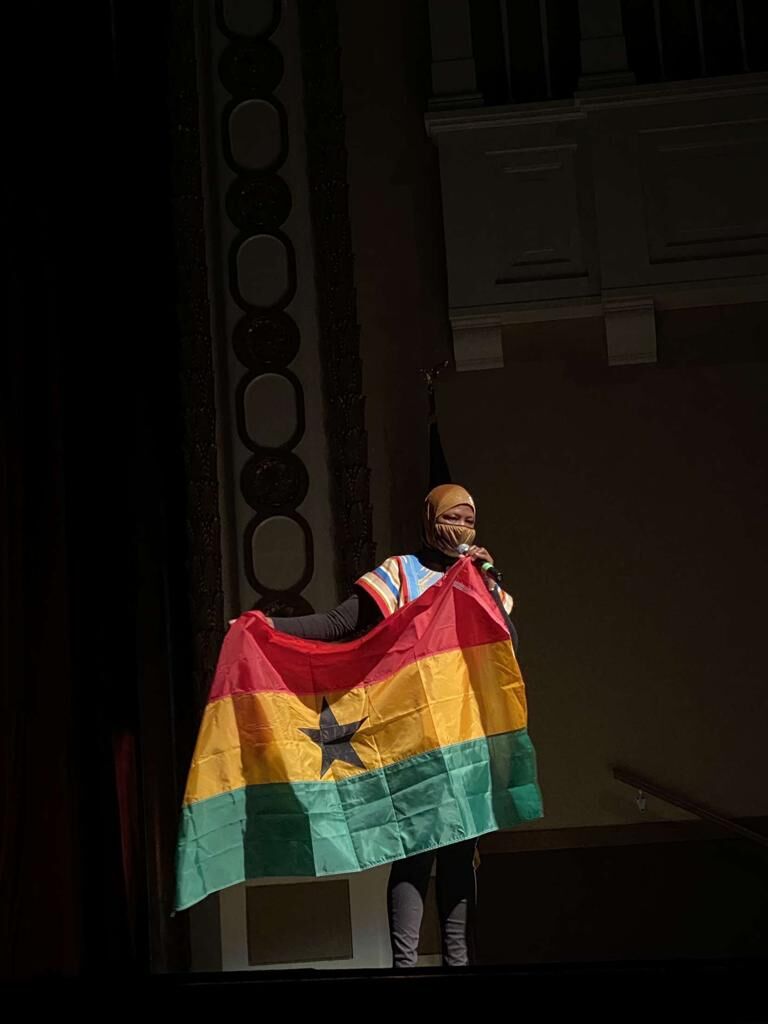 Singing, dancing, poetry, fashion and calligraphy were the order of the evening when students from more than a dozen countries showcased their talents during the International Culture Show at Albert Taylor Hall on Friday.

The variety show was the culmination of International Education Week at Emporia State University, which also included presentations, a networking and learning session, a Polynesian dance performance and a tea tasting event.

Saman Mehak started the evening with a trio of songs from her native Pakistan. Accompanied by guitarist Zak Putnam, she sang “Baari,” “Aap Jesa Koi” and “Bachana” in Urdu.

Mariama Mohammed sang Ghana’s national anthem and recited the pledge of allegiance before sharing a brief history of her country by way of explaining the colors of the Ghanian flag.

“Red is for the blood that was shed during the struggle for independence,” she said. “Yellow represents the rich minerals resources including gold. Green is for the many forests in my country. The black star represents African emancipation from slavery and unification against colonialism.”

Yumi Ashino and Mai Nagamine shared some of the history behind traditional Japanese calligraphy or shuji. Because the stage did not allow a proper demonstration of the art form, they showed a video of Ashino practicing shuji while wearing a yukata, a more casual version of a kimono. During intermission, Ashino offered her skills to anyone interested in having their name written in shuji. The line stretched through the lobby of Plumb Hall as more than 20 people waited their turn for a personalized piece of art.

Osaka native Ashino started learning shuji when she was eight years old, as most Japanese children do, she said. But she continued to practice long after her peers lost interest.

“My [calligraphy] teacher was so kind to me,” she said. “I thought maybe I could return the favor by [continuing] and sharing one of our oldest traditional art forms.”

K-Pop performances are always crowd favorites at the International Culture Show and this year was no exception. The Corky Girls — a group of 10 women from South Korea and Japan — had the audience cheering with their choreographed dance routines set to K-Pop hits.

Rui Zhao, a music student from China, performed “Dance of the Yi Nationality” on the guzheng, a plucked Chinese zither that is not a common instrument for American audiences. She was accompanied by Haoyu Huang on the tanggu, a traditional Chinese drum.

Godwin Izibili came to Emporia from Nigeria, where he earned a Bachelor’s degree in mechanical engineering. He is studying Information Technology at ESU with the intention of combining that knowledge with his engineering skills and business training. He showcased his musical talents by playing piano and singing “Eye Adaba,” a song by Nigerian artist ASA.

“The words of the song are about peace and a new dawn,” he explained. “It represents me coming to the States for new opportunities and bringing the peace of the new day with me.”