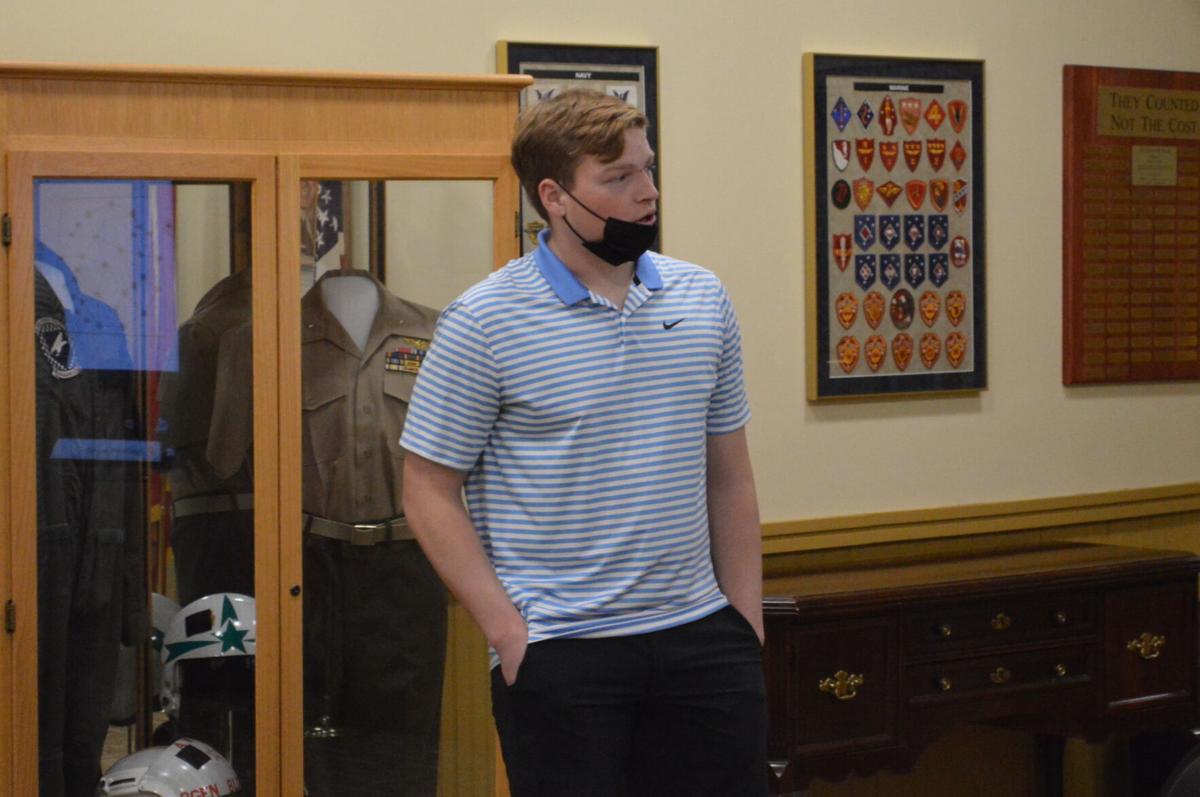 Ryan Sauter, a math major at ESU, addressed state House and Senate committees during Tuesday’s virtual town hall about redistricting. He spoke about how a more simplistic approach to redistricting would reduce legislators’ ability to gerrymander. 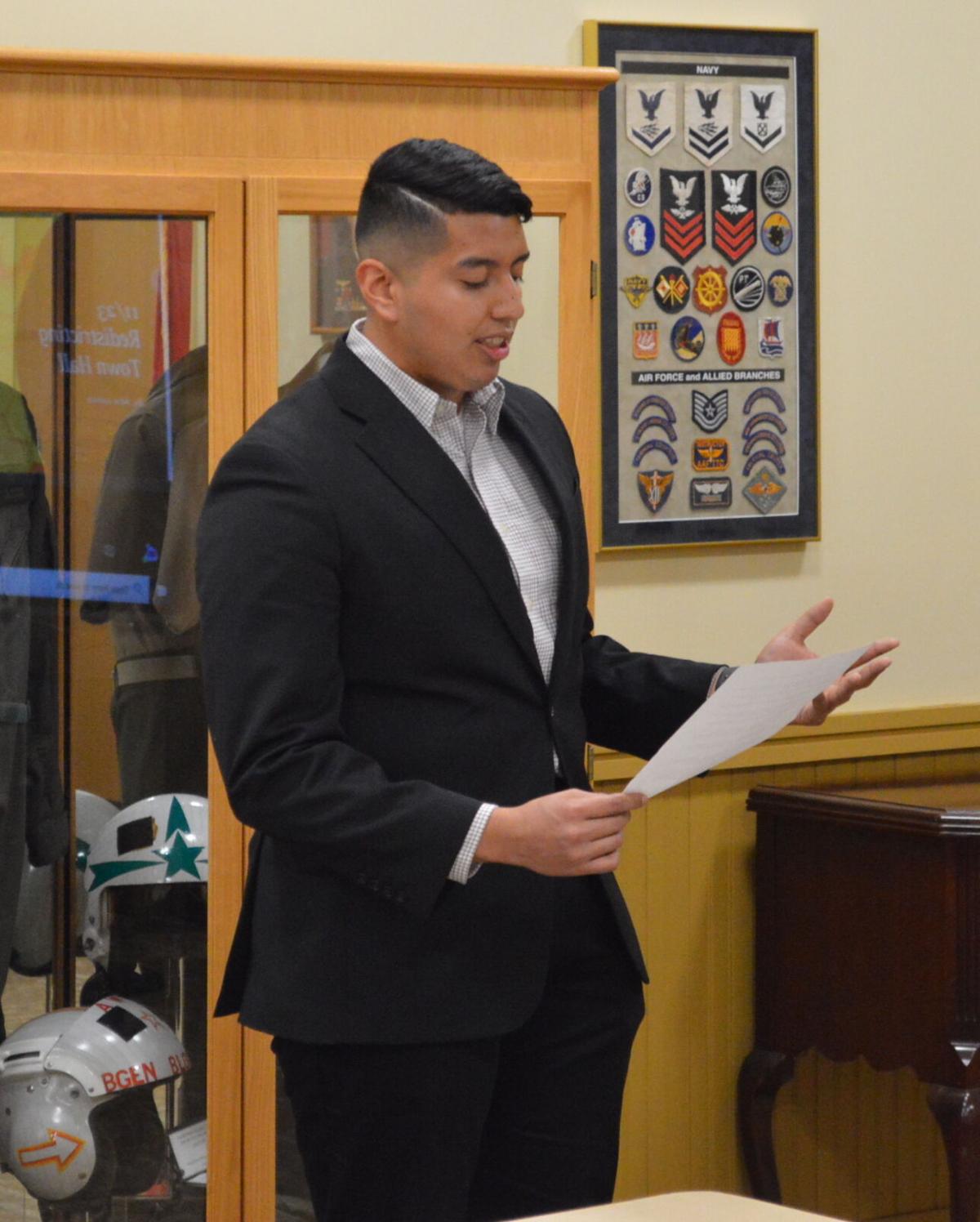 Abe Lemus, a junior in political science at ESU, speaks to Kansas lawmakers during a virtual town hall about redistricting Tuesday evening. He urged them to pursue public interest over political interest during his address.

Ryan Sauter, a math major at ESU, addressed state House and Senate committees during Tuesday’s virtual town hall about redistricting. He spoke about how a more simplistic approach to redistricting would reduce legislators’ ability to gerrymander.

Abe Lemus, a junior in political science at ESU, speaks to Kansas lawmakers during a virtual town hall about redistricting Tuesday evening. He urged them to pursue public interest over political interest during his address.

Abe Lemus and Ryan Sauter spoke to the state House and Senate committees from the Bloomer Veterans Hall of Honor at the Memorial Union, which was one of four host sites across the state.

The cities of McPherson, Liberal and Great Bend also participated in the town hall, which allowed citizens to make their voices heard as the state legislature prepares to redraw congressional and legislative maps in its upcoming session.

One other virtual town hall was held Monday and two more are planned for next week in other cities.

He said that Kansas’s system had led to issues in the past, such as in 2012, when a federal court had to apportion the state’s districts after the legislature could not come to an agreement prior to adjourning its session.

“Going forward, the current method of redistricting is partisan in nature for both parties,” Lemus said. “Although it is constitutionally the duty of the state legislature to redistrict their own community, representatives and state legislatures jeopardize free elections through their own political interests instead of public interest.”

He called on the state legislature to use an independent redistricting committee in 2030.

Lemus also presented a proposed district map that he drew up himself after conducting his research. He said that he believed Lyon County — as well as some other similar counties — should be included in the 2nd District rather than the 1st District.

“The Big 1st has been a staple for rural communities and Emporia is starting to become more urbanized and it houses Emporia State University,” he said.

He advocated for Emporia, Pittsburg and Manhattan to be included in the 2nd District, which already has two state university host cities in Topeka and Lawrence.

“The importance of keeping communities of interest — in this case, institutions of higher education — can help drive political interests toward these counties that mean so much to them,” he said.

Lemus urged lawmakers to enact changes that will benefit the people of the state rather than the political aims of those charged with the decision-making process.

“The current status quo for Kansas will only lead to a deeper polarization of politics and unequal representation of our population,” he said. “It hinders more people than improves the parties’ own political power and structure, and all I ask is that you consider public interest over political interests when you draw these maps for 2022.”

Sauter, a math major and a pitcher on the ESU baseball team, presented what he called “an alternative approach” to redistricting that would be less partisan in nature.

He said that forming pods of counties kept the process more “simplistic,” which reduces lawmakers’ capacity to gerrymander.

“Say we split this into the 105 ... counties in Kansas, that would allow you to make much more intricate patterns of districts,” Sauter said. “The premise of this game in which you’re doing your best to take away partisanship in your decisions and also bias is something that I believe should be considered when redistricting.”

I think we will agree that university towns are a bastion for demms,,,when you are attempting to group the universities in the 2nd ,,,what are your expectations on the the outcome ....wonder what the impact of a viable 3rd party would add to this conversation?

Ok,after you PONTIFICATED your retort ,I will again state,it looks like there is an attempt to turn the 2nd into demos.

Sail, the students made a cogent and reasonable argument that the primary goal of establishing districts should be gathering together people with shared needs and interests. In this case, the students suggest these communities share higher education.

Your only response indicates you think the primary goal of establishing a Congressional district should be to avoid opportunity for Democrats to have voice. The ESU students are out-thinking you, Sail.

Your turn. How do you think districts should be organized, and what would a district look like under your plan?

P.S. When you suggested that districting should be based on political parties and then accused me of being dogmatic (or "pontificated," to use your word) for thinking you should explain why...well, that's hutzpah, my friend.

Huh. It looks like a more thoughtful suggestion than your response was, Sail.

It's great to see this generation taking an active and thoughtful interest in the political process. It gives me hope for the future.