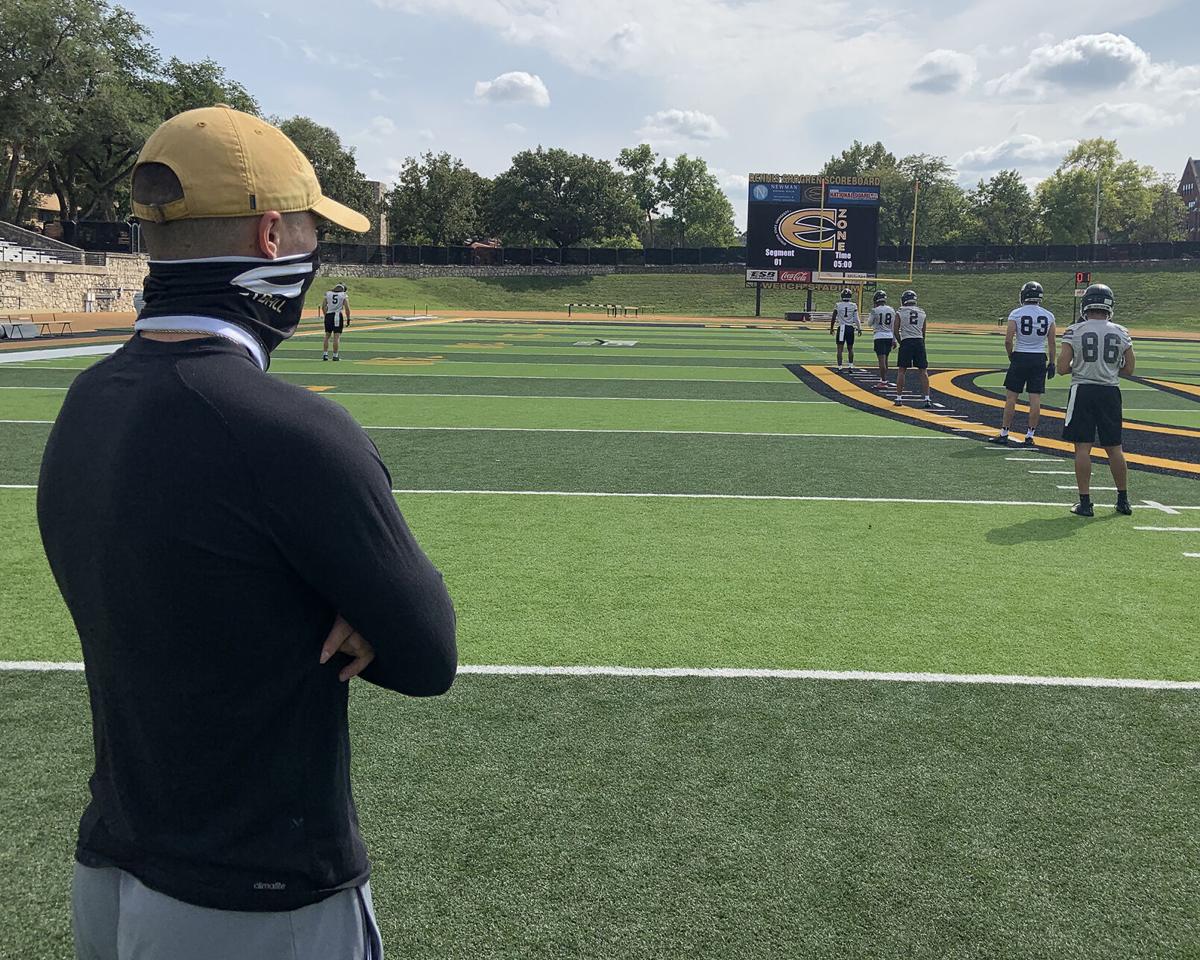 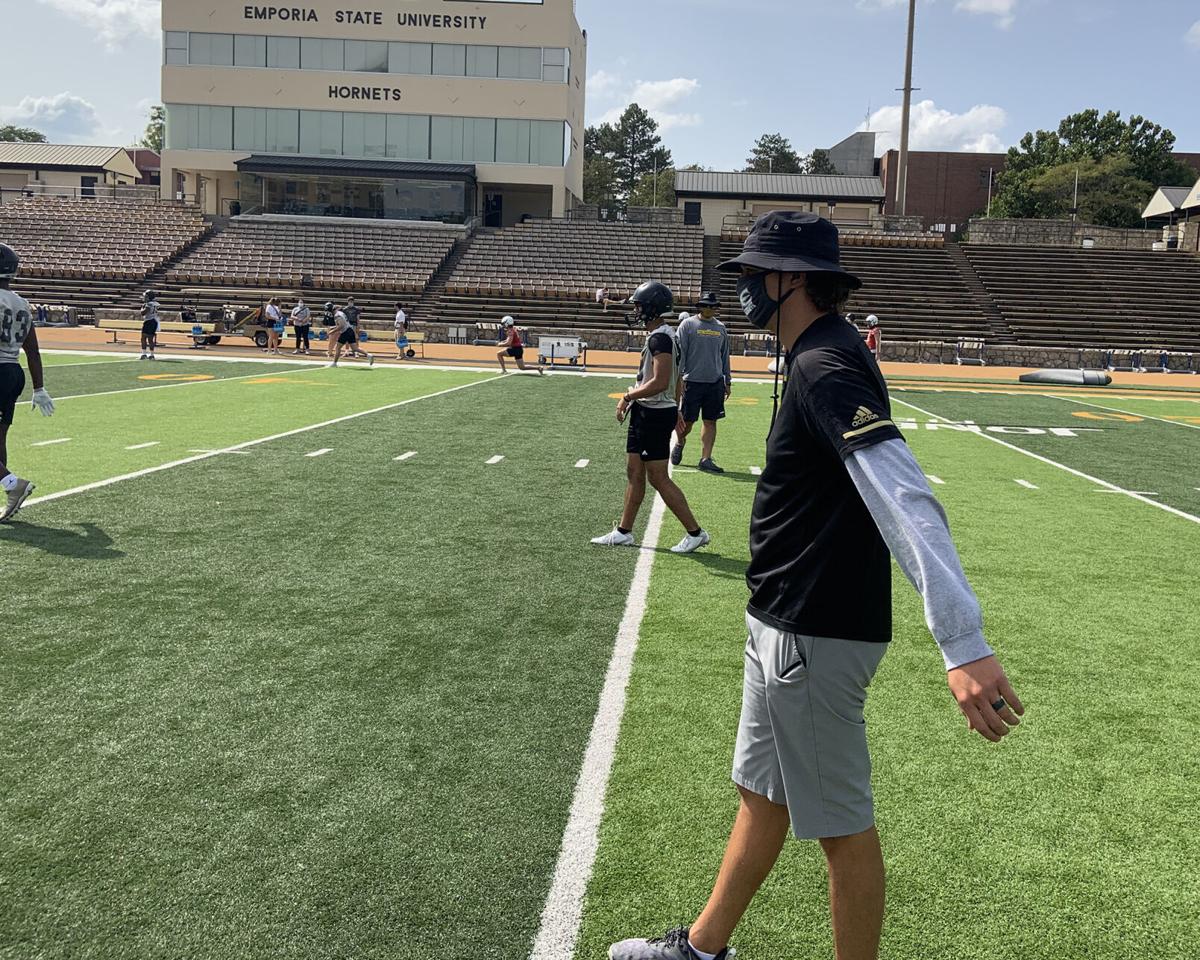 Emporia State graduate assistant coach Tyler Harris looks on as the Hornet football team warms up for practice on September 15, 2020.

Emporia State graduate assistant coach Tyler Harris looks on as the Hornet football team warms up for practice on September 15, 2020.

Athletic Director Kent Weiser still believes the COVID-19 protocols Emporia State has adopted for its student-athletes this fall — which include regular, random testing of 25% of the school’s athlete population — go further than the safety measures being taken by athletic departments at other nearby universities.

But his department’s precautions still weren’t enough to stave off the virus earlier this month when at least five ESU athletes tested positive for COVID-19 just days after its programs began practicing.

ESU’s programs returned to on-field activities this week following the positive tests, but the outbreak exposed flaws in the athletic department’s COVID-19 plan, most notably in its flow of communication, and has forced the administration to further ramp up its own safety and COVID-19 response efforts. Now, as ESU’s teams practice and hold out hope for a winter season, the athletic department believes it is more equipped to confront and contain future outbreaks.

“We feel much better about how we’re able to track things and what we know,” Weiser told the Gazette Tuesday. “I think going forward we’ll continue to be a step ahead of the game if something were to happen outbreak-wise again.”

All of ESU’s athletic programs returned to team athletic activities on Monday, 13 days after a cluster of COVID-19 outbreaks shut down practices on Sept. 2. Sidelined, but practicing are ESU’s fall programs including the football, cross country and volleyball teams, which had their season’s canceled by MIAA in August. The Hornets’ winter teams, including the men’s and women basketball programs, are likely to learn the fate of a winter season by Oct 1.

With uncertainty still looming, ESU’s athletic programs are back on the field. And as the teams continue to work, some with an eye on an upcoming season, the school’s athletic administration is forging ahead and hoping it will be better prepared in the event of another outbreak.

“We pulled the plug because we always knew this was serious,” Weiser said. “Having had to go through it once now, it helped us sharpen up our procedures and personal responsibility with our student-athletes.”

Despite the precautions taken, ESU’s athletic department found itself unprepared when its athletes tested positive for COVID-19 two weeks ago. For all of the factors that Weiser and the administration had under control within its facilities, it could not oversee and govern everything away from them. That challenge, along with privacy laws, slow test results and contact tracing difficulties, forced ESU to shut down on-field activity entirely.

“We had an outline of what we were supposed to do,” Weiser said. “But I think until it happens, it’s hard to implement all of those things and have them in place.”

The most glaring issue the athletic department faced was the lapse in communication in the aftermath of the outbreak.

When the symptomatic athletes were tested, their results went directly to the Lyon County Health Department and were protected by the Health Insurance Portability and Accountability Act. ESU, not yet sure if it would have to shut down athletic activities, had no access to the information. “We were behind on the information loop.” Weiser said. Slow test results, slower information and 13 programs unsure of what to do next left the athletic department in flux.

Finally, late last week, ESU gained clarity and had a stronger grasp on the situation at hand. By Monday, all of its team were back in practice.

The outbreak and the confusion that ensued provided a wake up call to ESU, its administrators and its athletes. The well-prepared athletic department learned quickly that even the most stringent protocols could not stop COVID-19, and in the wake of an outbreak that put athletics on hold for two weeks, ESU has built upon its protocols and systems, and Weiser feels the school is now ready for what might come in the future.

Among the most pressing issues in reworking ESU’s system was hammering out the flow of information between the athletic department, the university and the Lyon County Health Department. Over the past week, Weiser has worked with Chief of Medicine Ryan Lasota and the county health department to create a clearer picture of testing and quarantining protocols, paving the way for clearer procedures moving forward. Athletes who test positive for COVID-19 will only return after they have been released by Lyon County Public Health and cleared by a team physician.

“Getting that information was a hard one,” Weiser said. “Now all of that is much more streamlined.”

Within individual programs, ESU is taking steps to mitigate risk, as well. After the Hornets’ football team operated in pods over the summer, working in small groups rather than as a full team, all of ESU teams are now adopting the practice. The move is intended to not only prevent the spread of the virus, but will also aid in contact tracing if an athlete does test positive for COVID-19. Additionally, daily self-assessments are now mandatory, with a reinforced emphasis being placed on reporting symptoms to team medical staff.

The positive tests within the ESU’s athletic program brought with them fear, confusion and a realization that not even the best laid plans are enough this fall. Now, as athletes are back on the field, Weiser and his staff have returned the drawing board with new plan and a new perspective on just how difficult controlling and dealing with COVID-19 will be.

“You preach and preach, but once you see it, you know this is not a joke here,” Weiser said. “In some ways, we and our student athletes really did wake up.”

"I think going forward we’ll continue to be a step ahead of the game if something were to happen outbreak-wise again."