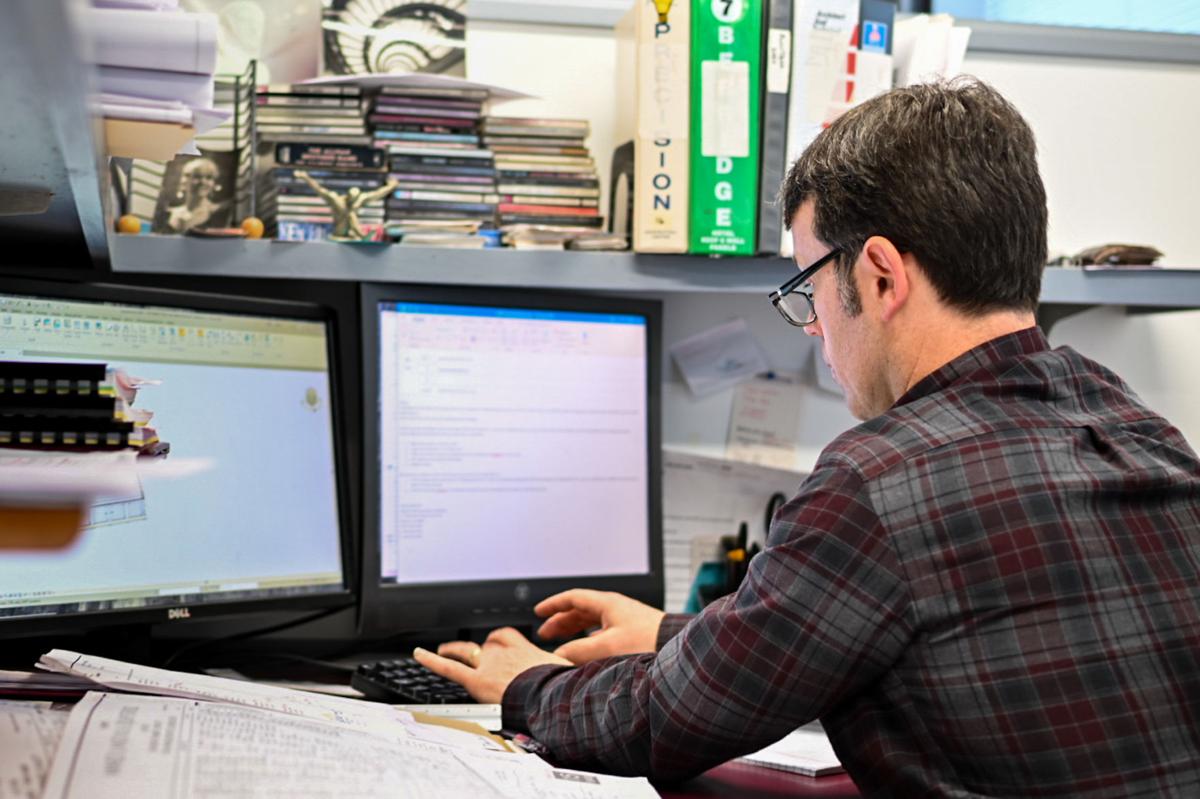 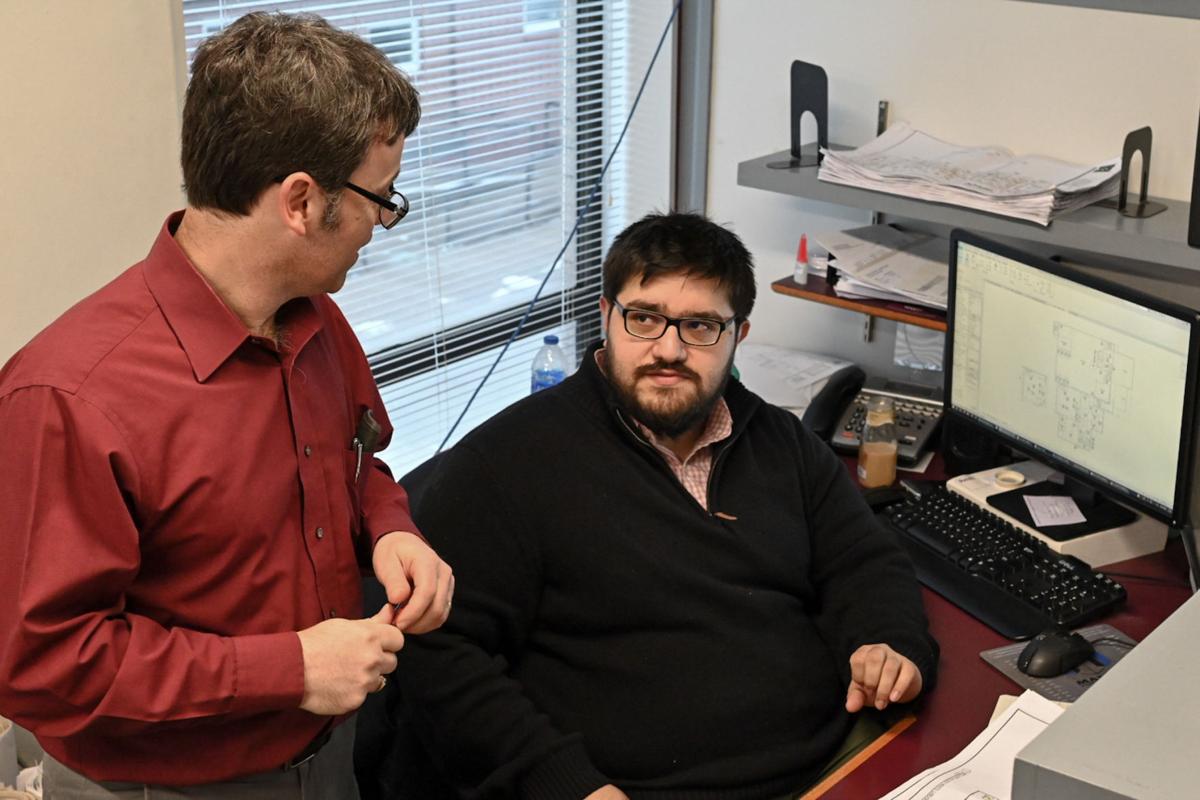 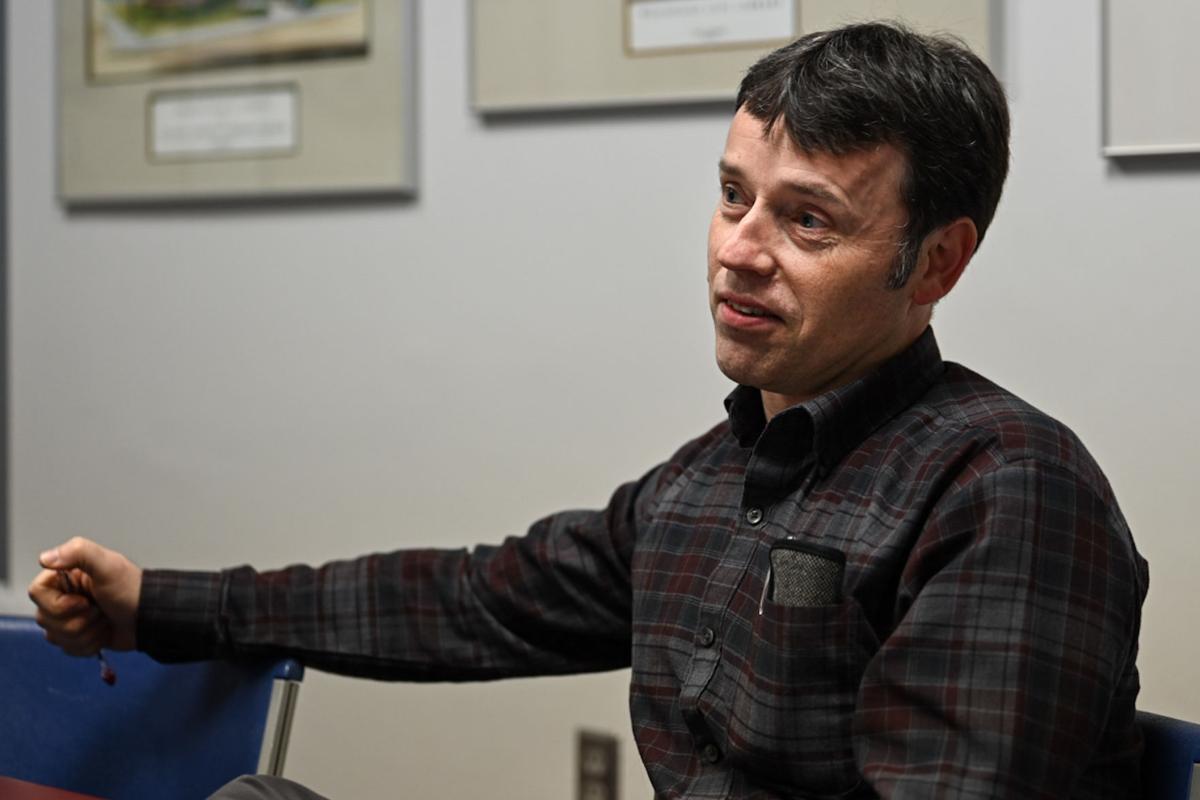 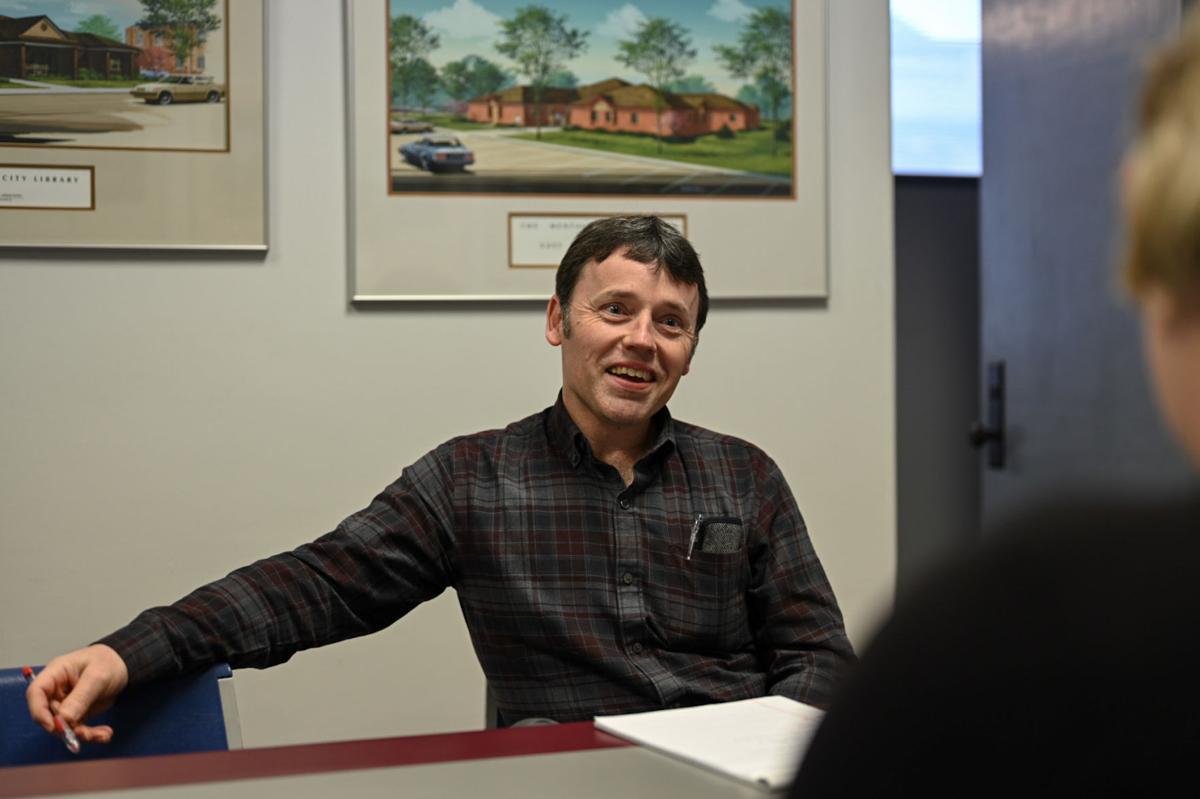 Peter Hauff is ushering in a new era at Emig and Hauff Associates Architects after starting at the firm 18 years ago in 2002. 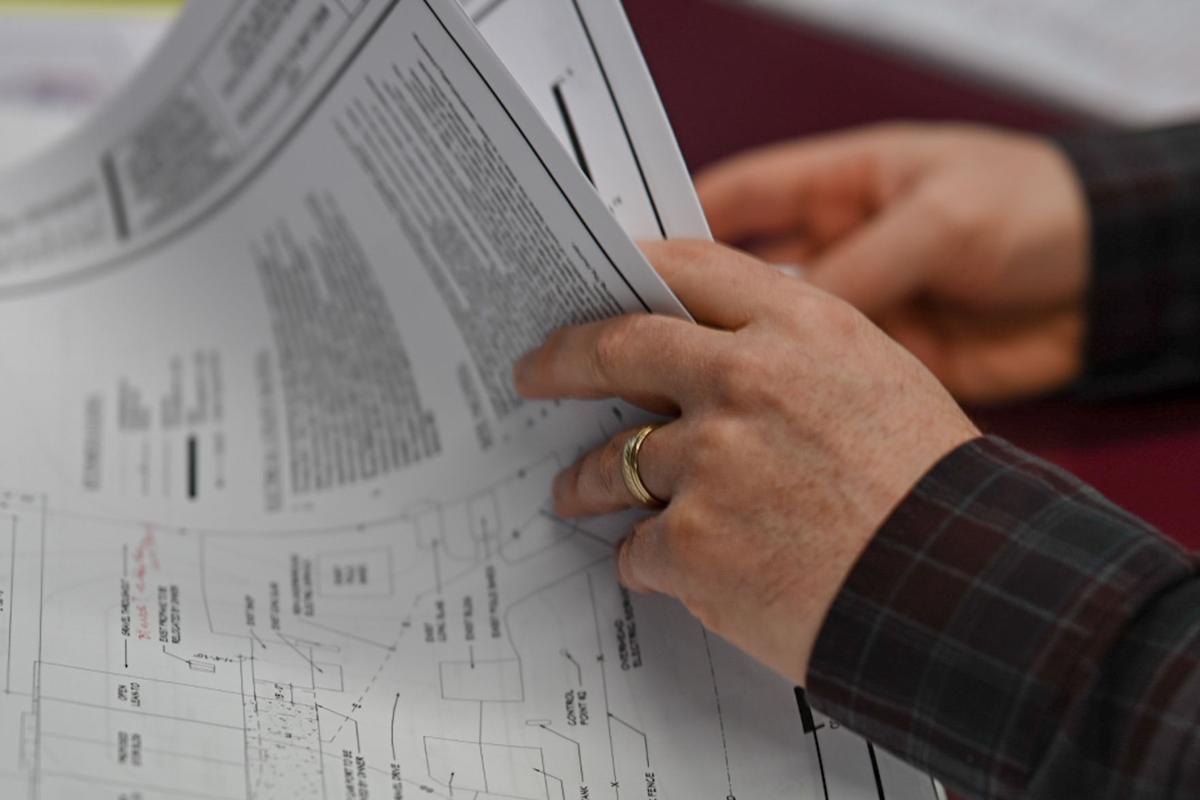 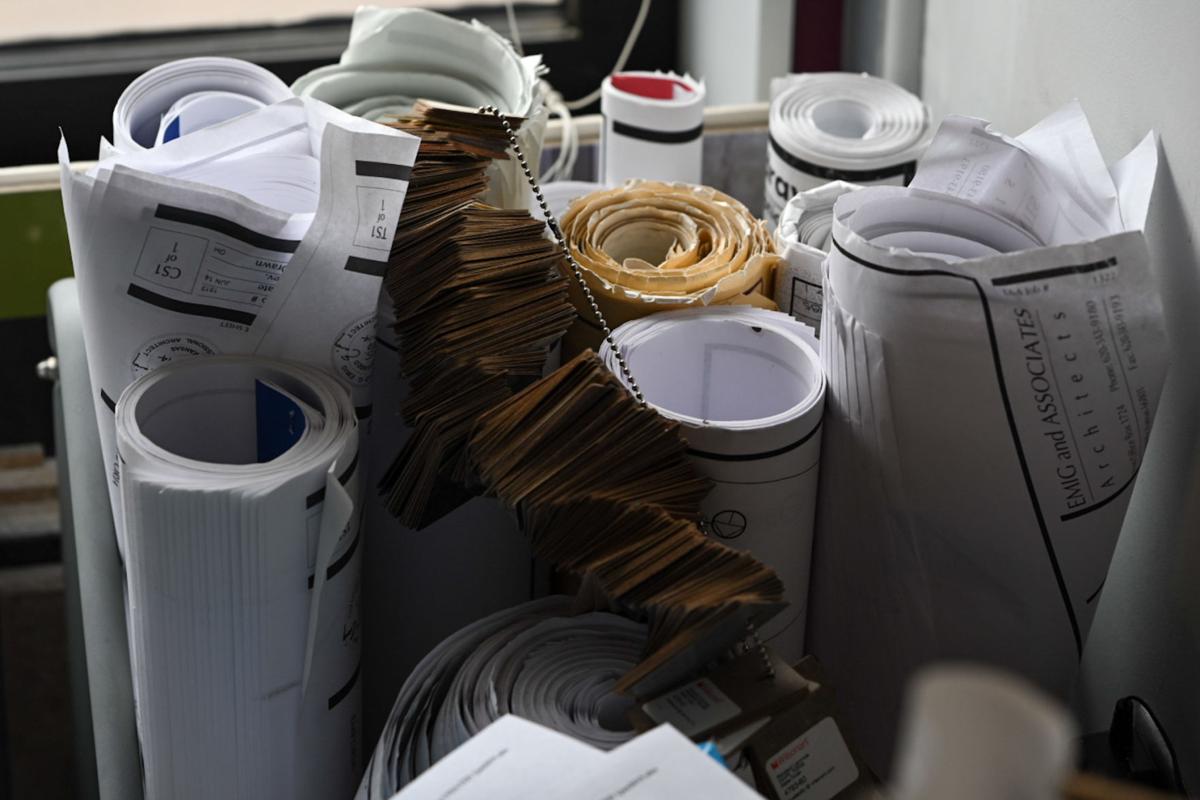 Plans and blueprints are found throughout Emig and Hauff Associates Architects, though much of the drafting work is done on computer software programs today. 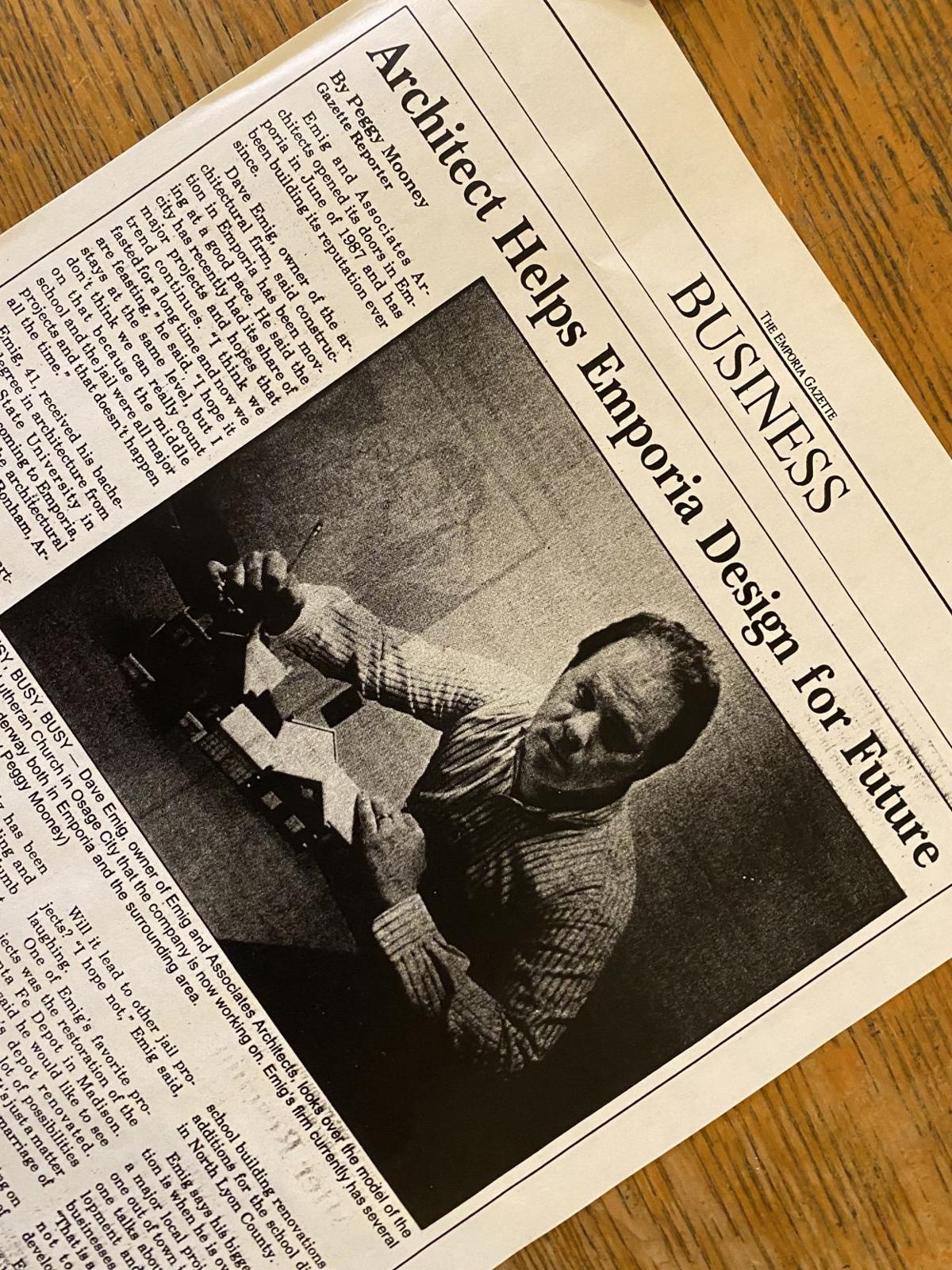 Dave Emig opened Emig and Associates Architects in 1987, a successful firm located in Emporia for more than 30 years. This 1993 issue of The Gazette shows the longevity of his career.

Peter Hauff is ushering in a new era at Emig and Hauff Associates Architects after starting at the firm 18 years ago in 2002.

Plans and blueprints are found throughout Emig and Hauff Associates Architects, though much of the drafting work is done on computer software programs today.

Dave Emig opened Emig and Associates Architects in 1987, a successful firm located in Emporia for more than 30 years. This 1993 issue of The Gazette shows the longevity of his career.

Emig and Hauff Associates Architects is entering a new phase in its development.

The architectural design and consulting firm has serviced Emporia and the surrounding area for 32 years with Dave Emig at the helm. Now, as Emig has entered retirement, long-time partner Peter Hauff has taken over the business.

Emig, who founded his firm in 1987, said the timing was right for an architect to bring a business to Emporia.

“At the time, the firm I was working for in Wichita was designing the parish hall addition to St. Andrew’s Episcopal Church on Commercial Street,” he said. “I was the lead architect on that, and in the process of traveling back and forth between Wichita and Emporia, I learned that I knew some people in Emporia.”

One of those people was former-Markowitz Builders Owner Bill Whetzel, who had been one of Emig’s teachers and coaches at Hutchinson High School.

“We got reacquainted and I began asking Bill if there were any architectural firms in town,” Emig said. “Trevor Lewis, who had a firm in Emporia forever, was retired, and that left no firms in town. I thought, ‘Well, what an opportunity for somebody if they want to take it.’”

Emig, who liked the size and location of the town, decided to take the opportunity for himself.

“I saw a lot of good things here,” he said. “I talked to Bill and he helped me get started, and I took the leap and I never looked back.”

Hauff, an upstate New York native with an early interest in engineering, realized his real passion was in architecture. He found his way to Kansas in the 1990s after enrolling in Kansas State University’s Architecture program. Hauff met and married a Kansas girl — Tina — with whom he has four children. In the early 2000s, after some time back east, the couple decided to settle in Emporia.

“I love the geography and the location there in upstate New York — in the Catskills,” he said. “But I really enjoyed the Kansas pace of life. It’s really not much different than what I was used to.”

Hauff said he took a chance when he mailed his resume to Emig 18 years ago, unsure if the Emporia firm had any openings or the need for another architect. The chance worked out — Emig took Hauff on part-time, initially, and then full-time.

Emig said he had a feeling early on that Hauff could take over the firm one day — a decision that would be surprisingly easy to make when the time came.

“It can be fairly easy if you feel like you’re turning it over to someone who will take it and run with it,” he said. “I knew that Peter was a quality person after the first week or two that he started working for me. He was just a great person with a great family, great with clients and a highly productive employee. He always had the firm’s interest in mind, and they really don’t come along like that very often.”

Emig said he “dangled the carrot” several times over the years, though Hauff always seemed reluctant to commit one way or the other. When Emig and his wife, Marsha, put their house on the market in preparation to move to the Kansas City area, so they could spend more time with their children and five grandchildren, Emig said Hauff realized he had to make a decision.

“I didn’t want to force him and I didn’t push it, but when he found out I had put my house up for sale, that’s when he started thinking that maybe he oughta be serious about taking it over,” Emig said with a laugh.

Hauff took over as principal architect last year and Emig began phasing himself out of the office. Emig is still helping out with consulting and finishing up some ongoing projects, though Hauff and Intern Architect Omar Herrera are now the only two staffers in the office. For Hauff, the transition into being the boss and handling more of the business-end of the firm has been an interesting ride so far. He is thankful that Herrera is there to help out with projects, though even Herrera’s role is beginning to change.

And Hauff is hoping some of those changes lead to more opportunities.

Emig and Hauff Associates pulls in a lot of contracts from the State of Kansas, for which Hauff is grateful. He would like to do more work locally, consulting with local contractors on home schematics and plans. Hauff said he enjoys renovations on historical buildings and the challenges they provide, and the science behind the design.

And he’s looking forward to continuing Emig’s legacy within the community.

“Emporia’s been great to us,” Hauff said. “It’s the right fit, and we’re really invested in the community.”

As for Emig, retirement is looking a lot like work so far with a house remodel underway. For someone who takes pride in his work, Emig said he’s just fine with that.

“You watch something grow from nothing to being a finished project,” he said. “You drive by and you can say, ‘I worked on that. I helped those people.’ Architecture is a very tangible and rewarding occupation and you’re always able to see the results of your work.”

Emig said although he’s enjoying his new adventures in the Kansas City area, he is thankful for the community that embraced his family and helped him create a successful firm.

“I do miss Emporia,” he said. “I was really comfortable in my routine, and about the only thing that dragged me away was family. I guess you just have to make priorities, and that was my priority.”