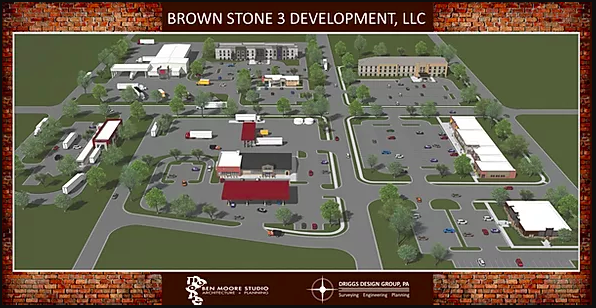 This prototype shows what a travel plaza coming to a 33-acre tract of land just south of the US Highway 50 roundabout in Emporia will look like. 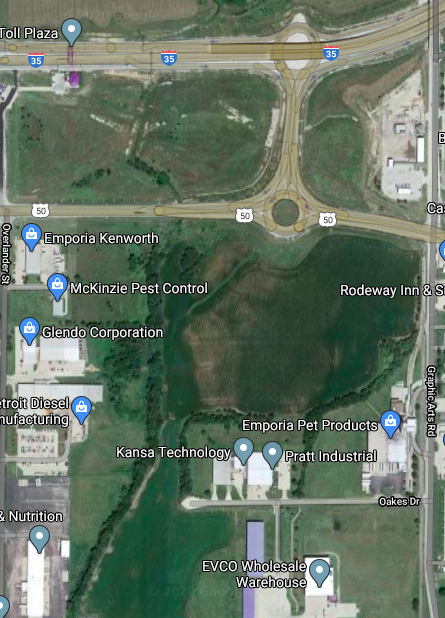 This prototype shows what a travel plaza coming to a 33-acre tract of land just south of the US Highway 50 roundabout in Emporia will look like.

A new travel plaza bringing hotels, restaurants and an upscale RV park is coming to Emporia.

Johnny Brown, president and CEO of Topeka-based Brown Stone 3 Development and managing partner with D & J Land Development, told The Emporia Gazette that contracts for a 33.70-acre tract of land located just south of the US Highway 50 roundabout near Graphic Arts Road were signed last week.

“We are going to do a travel plaza, which is approximately 12,000-square feet,” Brown said. “In that travel plaza, they will have three restaurants with a drive-thru on one end.”

The RV park, which Brown described as “very upscale,” will include cabanas and a pool.

“It will be very well-maintained,” he said. “It’s designed for the traveler. Everything we do is on high-traffic locations.”

While Brown is not able to divulge what flagship restaurant is attached to the project just yet, he said it is a popular, nationally-recognized chain that will appeal to travelers and locals alike. The restaurant will encompass 2,000-square feet of the site, with other businesses already lining up to be a part of the project.

Brown estimates that the land is 65 - 75 percent sold to the tenant base coming to the site as of press time.

According to the City of Emporia website, a TIF is a “public financing method to promote private and public investment for economic development, redevelopment, infrastructure and other community improvement projects,” while a CID is a “self-imposed additional sales tax collectible only at that location that encourages private and public development without requiring taxpayers, businesses and others to aggressively subsidize the economic growth.”

Once those entitlements are secured, Brown said work could begin on the site as soon as September. In all, it will take about two years to complete and will bring between 100 - 105 jobs to the city.

Brown said this project has been in the works for nearly two years. During that time, the city has been “easy” to work with throughout the process.

“The city has been very congenial to work with,” he said. “They have been wanting more development in that area for a long time.”

Jerid Thomas, President of Thomas Transfer, owned the land the new development will go on.

“We are excited to see this land developed and eventually produce tax revenue for the city,” Thomas said.

"Once you start building buildings, you have a lot of retailers calling you to get involved."

Maybe people should focus on giving people a reason to come to emporia first? Just a thought.

This project looks more realistic than the boon-doggle up on 24-th. street. So many folks were against it from the beginning, but our city leaders in their infinite wisdom ignored the taxpayers. Now we have a development with only one store, and the rest of the ground is so stirred up that it is basically ruined. I still say that the developer sold the city a white elephant, but they seemed to dwell on every thing the guy said. Oh well, it's just money, and only the city inner circle understand how to spend it.

The issue I have seen other cities have is that these companies, and very little information is available on Brownstone 3, come in and ask the city to put in utility lines, sidewalks, parking lots, etc., and then if the businesses do not come in, no income is being generated to help replace all of those tax dollars expended on the infrastructure. It becomes a further burden to the taxpayers. Also, I think Cargill is great and know they just added space, but sometimes the smells coming from there might not be the best(at least I think they are coming from there as they sure come from somewhere in that area), and also when the dump burns stuff and the wind is right/wrong........not the best area to draw people in to sit at cabanas maybe. Developers do this as way to support the jobs they have developed for themselves. Probably their best trait is salesmanship. I wonder why they aren't considering building something over on 24th street since there is certainly space there. I think a really hard look needs to be taken at what the citizens who pay taxes would like to see and feel the city needs rather than a firm from Topeka that I am guessing hasn't been around very long an LLC, try to decide for them. Again, "Build it and they will come." is all too often false. I have seen this before.

This should be good for our sales tax .

Waiting for the free handout. If he doesnt get it we don't build.

And, if they get the handouts and the deal falls through, businesses fail, the city/county ends up footing the expenses. Driving across the country, it is unbelievable how many very nice business complexes sit empty and become a burden to the local governments. And, I have never seen the number of jobs promised by these "proposals" actually be more than 1/2 the promised amount. In this case, probably looking at part-time minimum wage jobs anyway while further weakening the ability of the city/county to have the funding to help bring in businesses that pay a living wage. "Build it and they will come."? Don't bet on it when it duplicates services already in place.

There are already at least 2 motels sitting empty, and an RV Park in Emporia. Two new restaurants are just opening. They will most likely expect "concessions" from the city, like infrastructure (sewers, sidewalks, parking lots, etc.) plus tax breaks. I see this company has plans for other cities as well. I saw something similar to this in the past in other cities, and "build it and they will come", yeah, don't buy into that. In order to grow, the population will have to increase and in order to spend money at new establishments without putting the older ones out-of-business, the amount of disposable income will have to increase with either wage increases or bringing employers that pay a living wage into the area, so understanding economics for those jumping on this band wagon would be a plus. Growth happens in Emporia/Lyon County when living wage jobs are brought to the area keeping in mind that Emporia has a poverty rate of about 25%. I have seen this kind of thing before, and I have a clue how this plays out. Understand what the city/county gets themselves into with something like this.

We kind of agree on this as I think it is more than "kind of dumb". There won't be enough business to split it up. RV parks in areas that are not considered "destination" (like Disney World, Sea World, major cities with many amenities) are "feast or famine". In Emporia, the current RV Park does well during the two big events each year, when contractors are building something like the current wind farm project, with a bit of business when the snowbirds are migrating in the fall and spring. With all the local lakes, both State and Corp of Engineers, and boondocking, the demand in the area just isn't that high. Both Wichita and Topeka have the higher end parks and the amenities. Maybe for once, bring something in that isn't duplicating what is already here?

Oddly, and for no apparent good reason, the comment I was responding to has been removed, and should be restored.