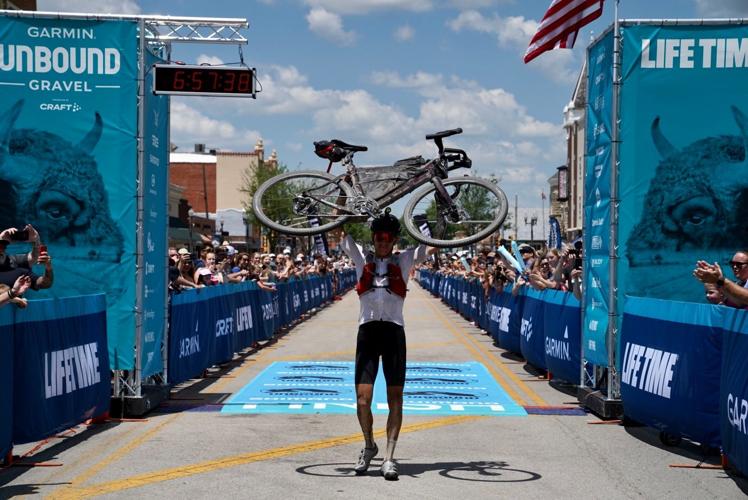 Taylor Lideen lifts his bike over his head after winning the 2021 men’s XL race in less than 24 hours. He said it was thanks to his decision not to sleep. 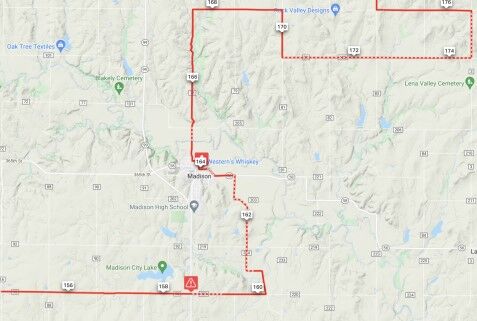 A map submitted to Madison City Council in March revealed part of this year’s Unbound Gravel course. It would have checkpoints in Eureka, Hamilton and Madison.

Taylor Lideen lifts his bike over his head after winning the 2021 men’s XL race in less than 24 hours. He said it was thanks to his decision not to sleep.

A map submitted to Madison City Council in March revealed part of this year’s Unbound Gravel course. It would have checkpoints in Eureka, Hamilton and Madison.

Part of the secret is already out. But Monday will bring a big reveal for the big crowd that’s coming to Emporia.

“We have about 4,000 people registered to do the race,” Unbound Gravel publicist Marisa Dubrot said. “It’s definitely our largest starting field.”

But that field doesn’t know exactly where this year’s gravel bike race will run. The announcement comes Monday, giving everyone about three weeks to study the layout.

Dubrot confirmed that the major bicycle races on the first weekend in June will take a southern swing for the first time in four years.

Race director Ben Sachs revealed some of the details in March. He presented maps to the Madison City Council indicating the course will pass through the city park. That will follow checkpoints in Eureka and Hamilton.

The map Sachs presented had riders going north from Madison, but turning east before reaching Olpe.

Unbound Gravel adds to its diversity this year by offering a new para-cycling category. But the field includes 60 exclusive “Grand Prix” athletes.

But part of the attraction is that all ages and backgrounds join in Unbound Gravel.

“The various distances make it approachable for many,” McRoberts said —including 25 and 50-mile courses and a juniors division.

Organizers hope to avoid the weather-related issues that developed during Lyon County’s first two big gravel races of the year.

The Flint Hills Gravel course in April needed a mid-race reroute after a prairie fire erupted during the afternoon. Then last weekend, La Grind changed part of the course at the last minute due to flooded Greenwood County roads.

“Last year, the weather was hot and a little bit windy,” Dubrot recalled. “The teams definitely prepped for all of those.”

They also have to prepare for an early alarm clock.

But the racing will start even earlier for the XL racers, who will travel 350 miles.

If you want to enter Unbound Gravel, the big races are sold out. They’ve become that popular.

“For the longer ones, they had to do a lottery system,” Dubrot said. The drawing was in January. “We’re definitely excited to see that grow.”

People around the world will be able to follow the action. FloSports plans to broadcast the races for the second time.

But people who have been to Unbound know it’s much more than a race.

“The City of Emporia will be the All Things Gravel Expo presenting sponsor this year,” McRoberts said. She calls it “an event weekend for everyone.”

For Dubrot, who attended her first Unbound Gravel last year, the break in Emporia from a marketing desk job in Colorado is refreshing.

“It’s so fun,” she said. “The gravel racing community is like no other.”