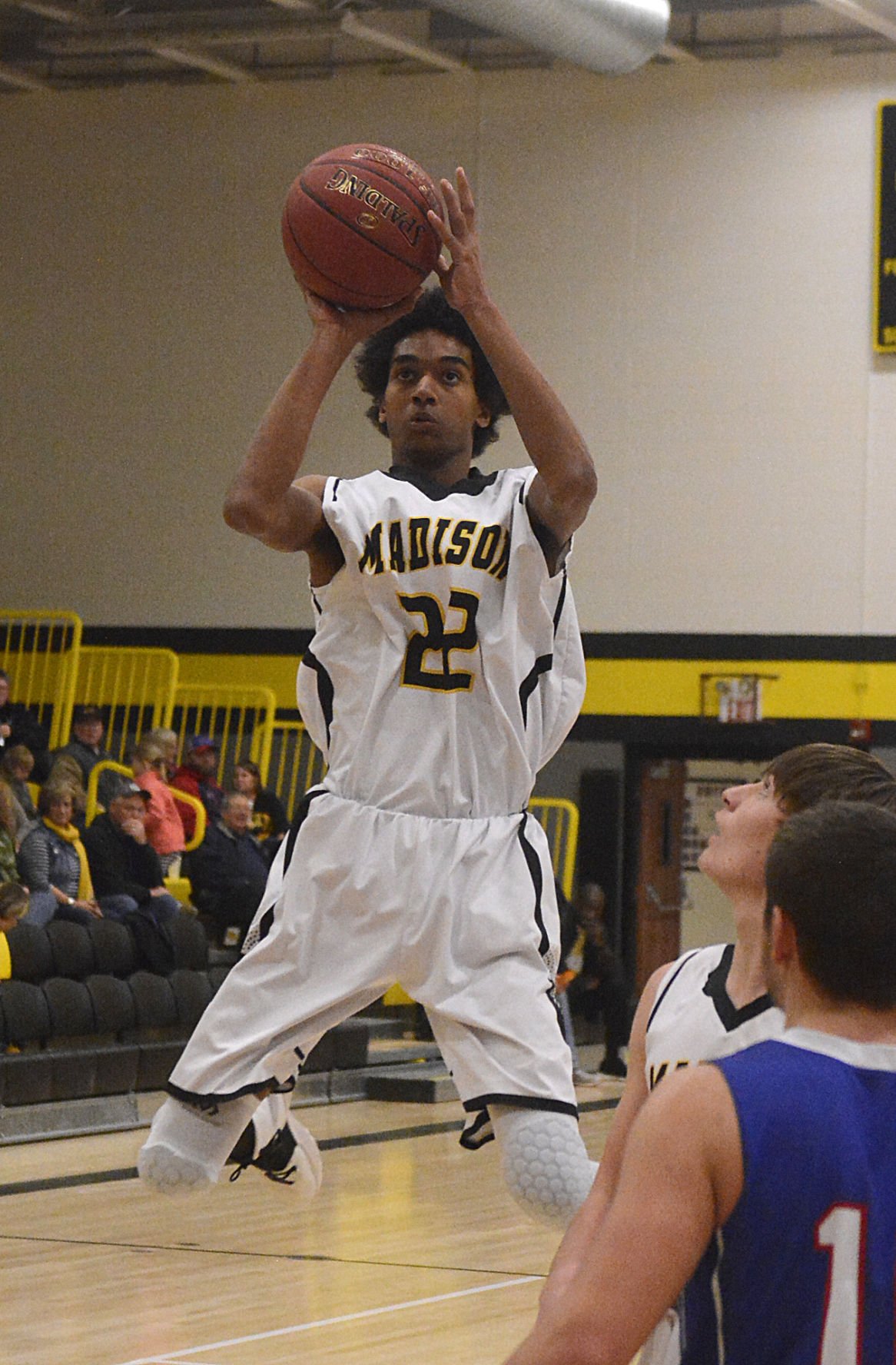 Kelton Buettner had 12 points and 16 rebounds in Madison's regional opener with Hartford. 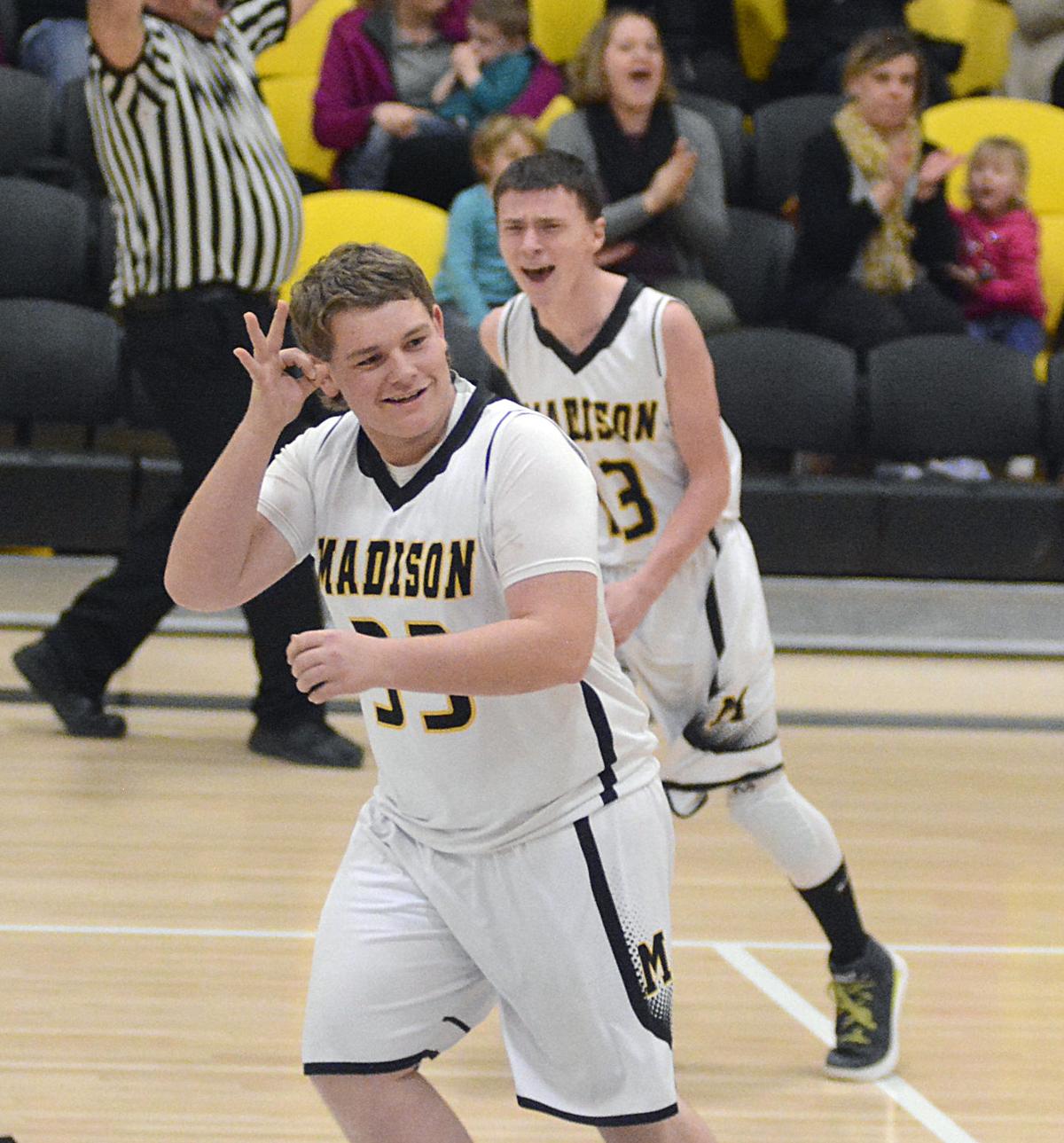 Davin Stutesman (33) motions after completing a 3-pointer during the fourth quarter of the Bulldogs' 70-41 win over Hartford Tuesday night. 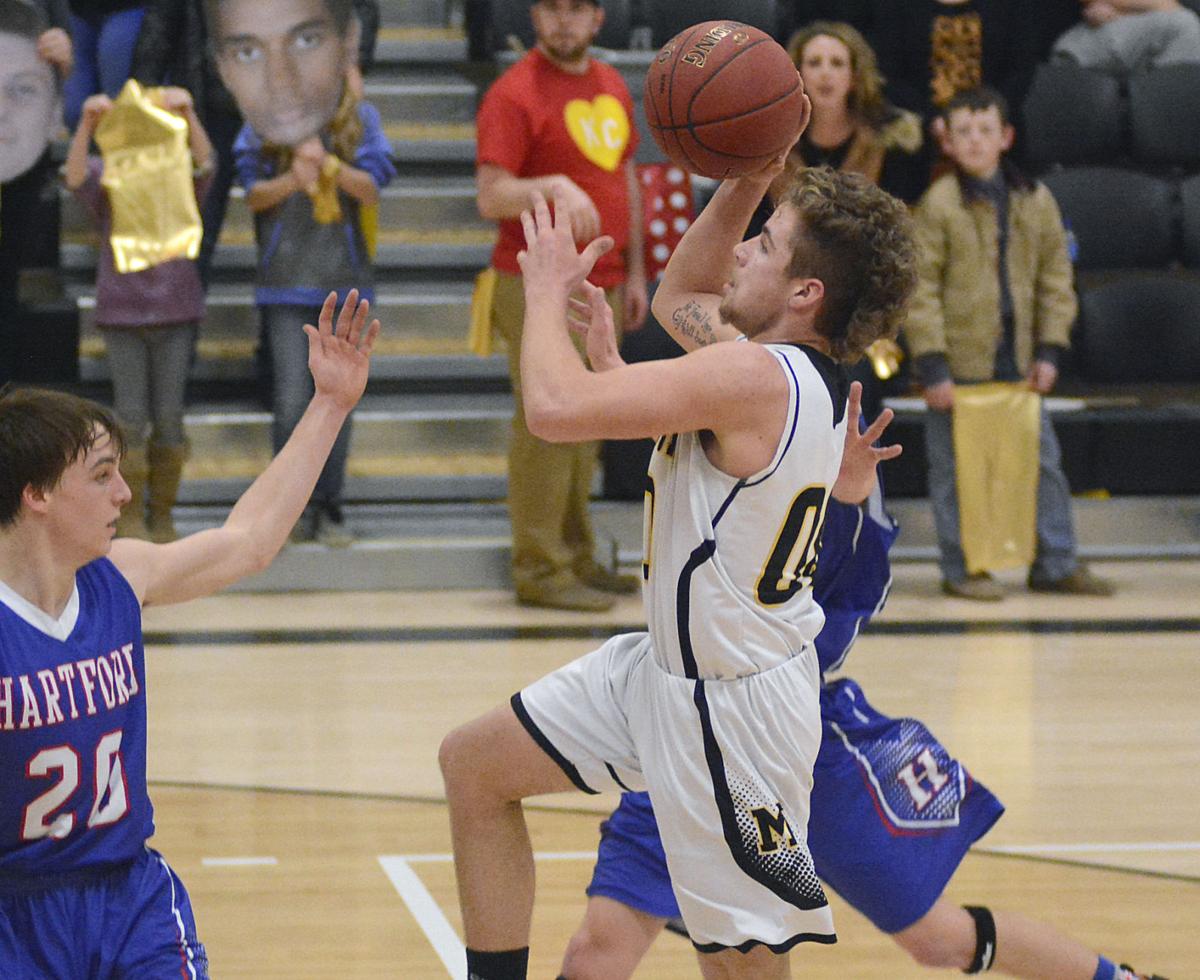 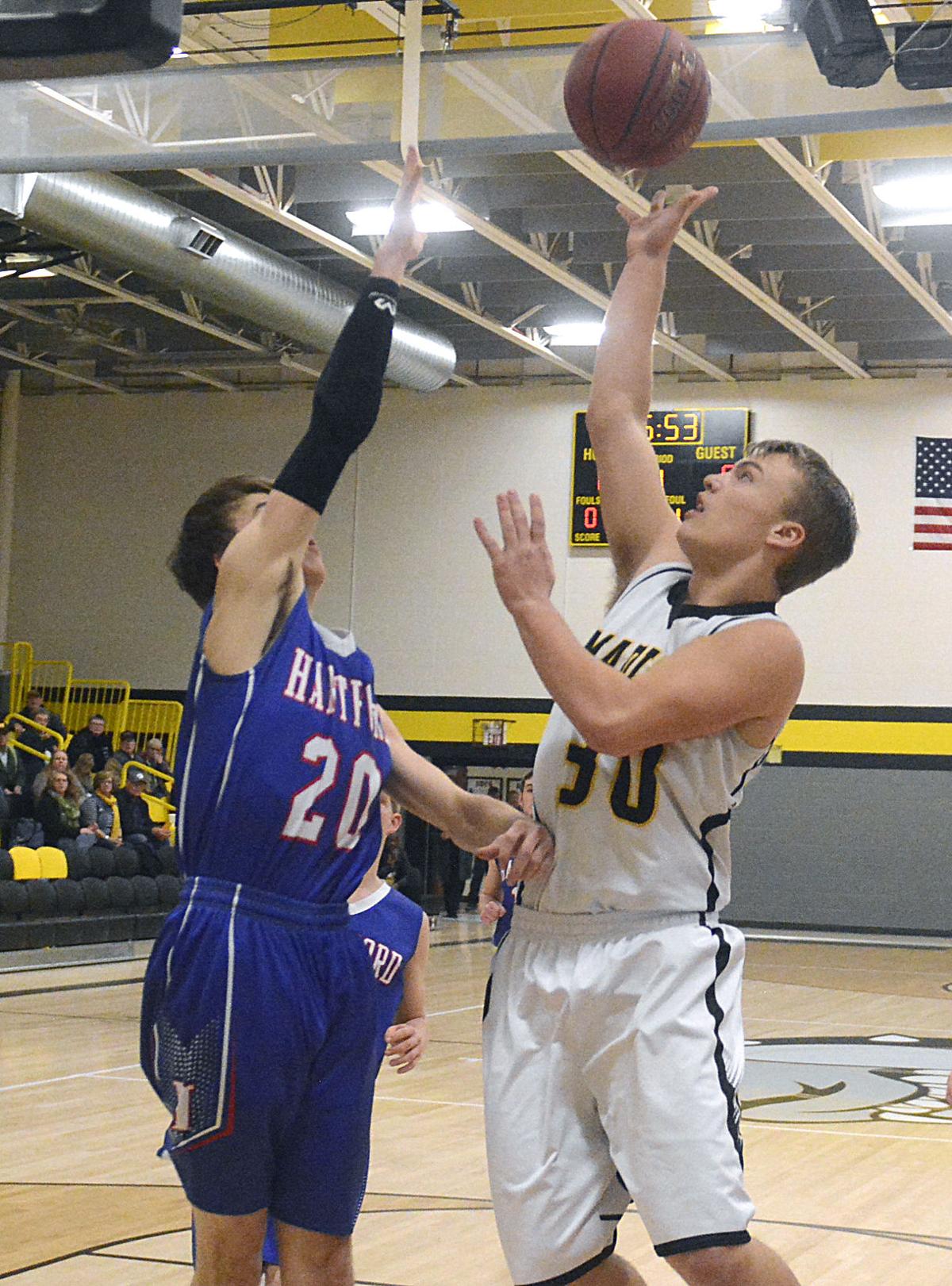 Madison’s Chase Harrison (30) scored 23 points against Hartford on Tuesday night, leading the Bulldogs to a 70-41 victory.

Kelton Buettner had 12 points and 16 rebounds in Madison's regional opener with Hartford.

Davin Stutesman (33) motions after completing a 3-pointer during the fourth quarter of the Bulldogs' 70-41 win over Hartford Tuesday night.

Madison’s Chase Harrison (30) scored 23 points against Hartford on Tuesday night, leading the Bulldogs to a 70-41 victory.

MADISON — There are ‘good starts’ and then there are starts like the Madison Bulldogs had against Hartford in their regional matchup on Tuesday night.

The Madison boys had an 18-0 lead before the Jaguars got a shot to fall and the Bulldogs were able to maintain that margin most of the night in a 70-41 victory.

Brett Dannels had felt at times his team came out too tense. He told his squad on Tuesday that he wanted his fellows to relax and settle into a rhythm and it certainly did.

“I told the kids ... sometimes we come out ... a little too edgy,” he said. “I said (to) go out, relax, just play your game and do all the little things that we’ve talked about and worked really hard on this week in practice.

“(And) when you make shots early like that, it makes things a lot easier.”

By the end of the first quarter all five starters had scored for Madison, including a pair of 3-pointers from Austin Watts at the start.

“Austin has been huge for us,” Dannels said. “Since Christmas, he has really come a long ways and he’s done a lot of good things for us. Tonight, just his leadership and he got a quick start, got the rest of the team to settle in and relax and it paid (off).”

By the time Hartford’s Dalen Kistner got a layup to fall, with 2:10 remaining in the first period, the Bulldogs already had stretched their margin well into double-digits.

“We knew that we had to come in ready to go, hitting shots and (playing) good defense because (the) last time (we played them) we didn’t come out with that,” Watts said. “We knew this was going to be a tough game, (so) we had to come out strong.”

The Bulldogs didn’t let up much in the second, boosting their lead as high as 25 before Hartford closed out the quarter with an 11-2 run.

Patrick Gardner told his team to take it one play at a time in its pursuit of a comeback. The Jaguars responded, to a point, but couldn’t completely break through.

“We got (the deficit) to 15 twice, got it to 14 once with the ball and we just shot ourselves in the foot and could never get it to where we needed to get it to ... single digits,” he said. “I thought we had plenty of opportunities to do it, we just couldn’t get there.”

Kistner scored 16 and Cody Thomas had a team-best 18 for Hartford, but the two shooters combined to make just three 3-point buckets on the night.

“The last time we played these guys, those two kids really took it to us,” Dannels said. “That’s what ultimately won the game for Hartford. I challenged (them) to come out tonight and shut those two guys down and ... make the other three kids beat us. I rotated a lot of guys defensively against those two and tried to keep giving them different looks and it worked.”

Chase Harrison had a game-high 23 points for Madison, scoring nine in the fourth quarter. Watts had 12, most of which came in the first half. Kelton Buettner (12) and Hunter Engle (11) also recorded double-digit point totals for the Bulldogs.

“Tonight, Hunter Engle ... worked really, really hard on the boards, got a lot of rebounds and putbacks, knocked the shots down at the foul line when he got the opportunity ... he was huge,” Dannels said.

“The kid goes to work out there,” Dannels said of the sophomore post. “He’s understanding what I want, he’s become physically and mentally tougher and if he keeps playing like this, the team’s got a possibility to keep moving forward in this tournament.”

The Jaguars’ season came to an end with a 5-15 record.

“It’s obviously not the outcome we wanted for the season,” Gardner said. “I thought I had three really good seniors that did everything I asked them to all year long. Somebody always wins and somebody always loses and unfortunately, we weren’t able to get over the hump ... most of the year. I thought we were competitive in a lot of games, which I was definitely happy about, it kept us motivated all year long. And I always felt like when we got on the floor, we had a chance.”

Next up for the Bulldogs will be Waverly in another Lyon County League rematch facing off in the regional semifinals.

“It’s very exciting,” Watts said. “In the last couple of years, we haven’t made it this far, it’s just the next step in pushing on, getting better every time we practice, working hard as a team and just pushing through it. It means a lot to make it this far.”