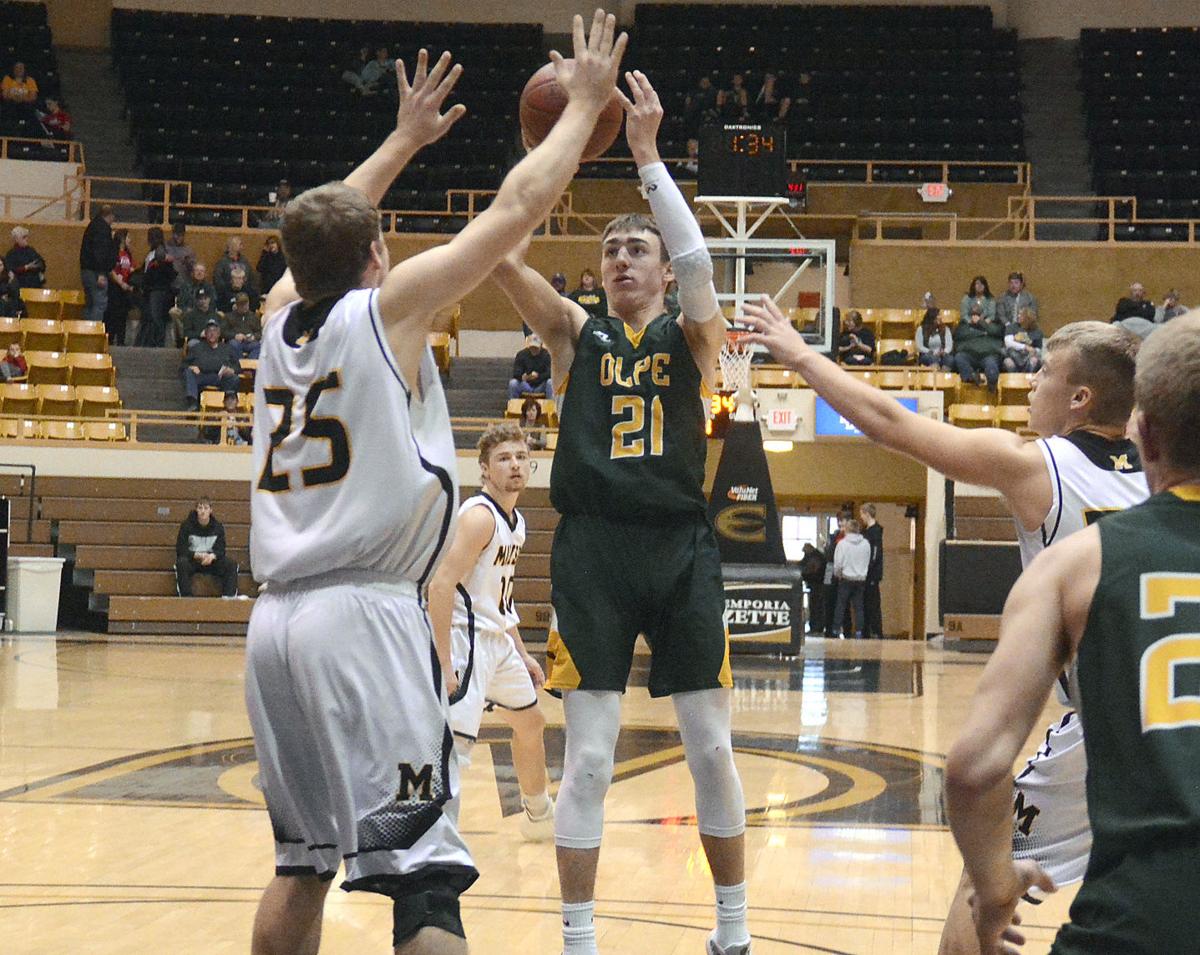 Olpe senior Camden Hoelting (21) scored a game-high 23 points for the Eagles as they secured third place in the Lyon County League Tournament with a 52-35 win over Madison on Saturday afternoon. 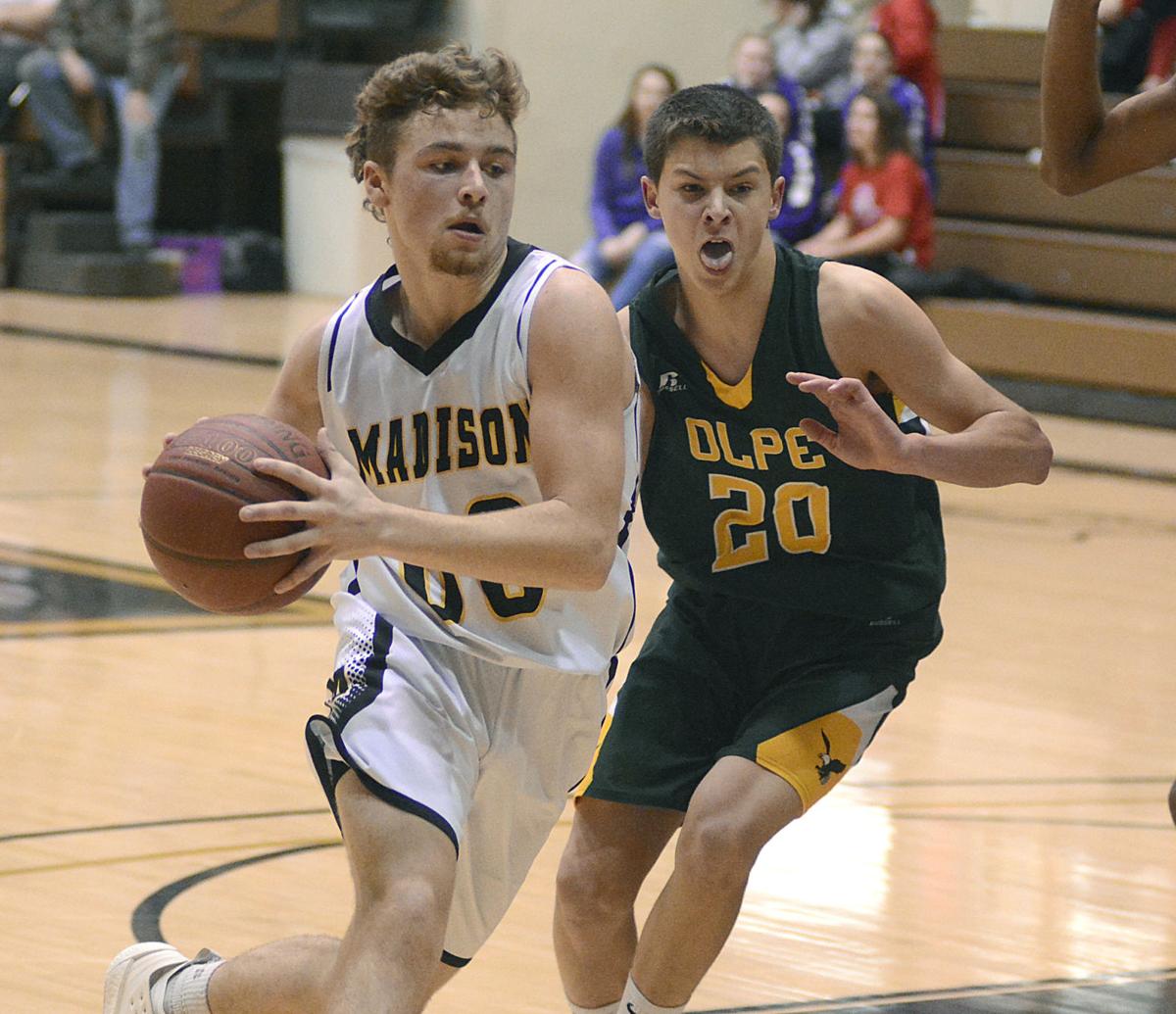 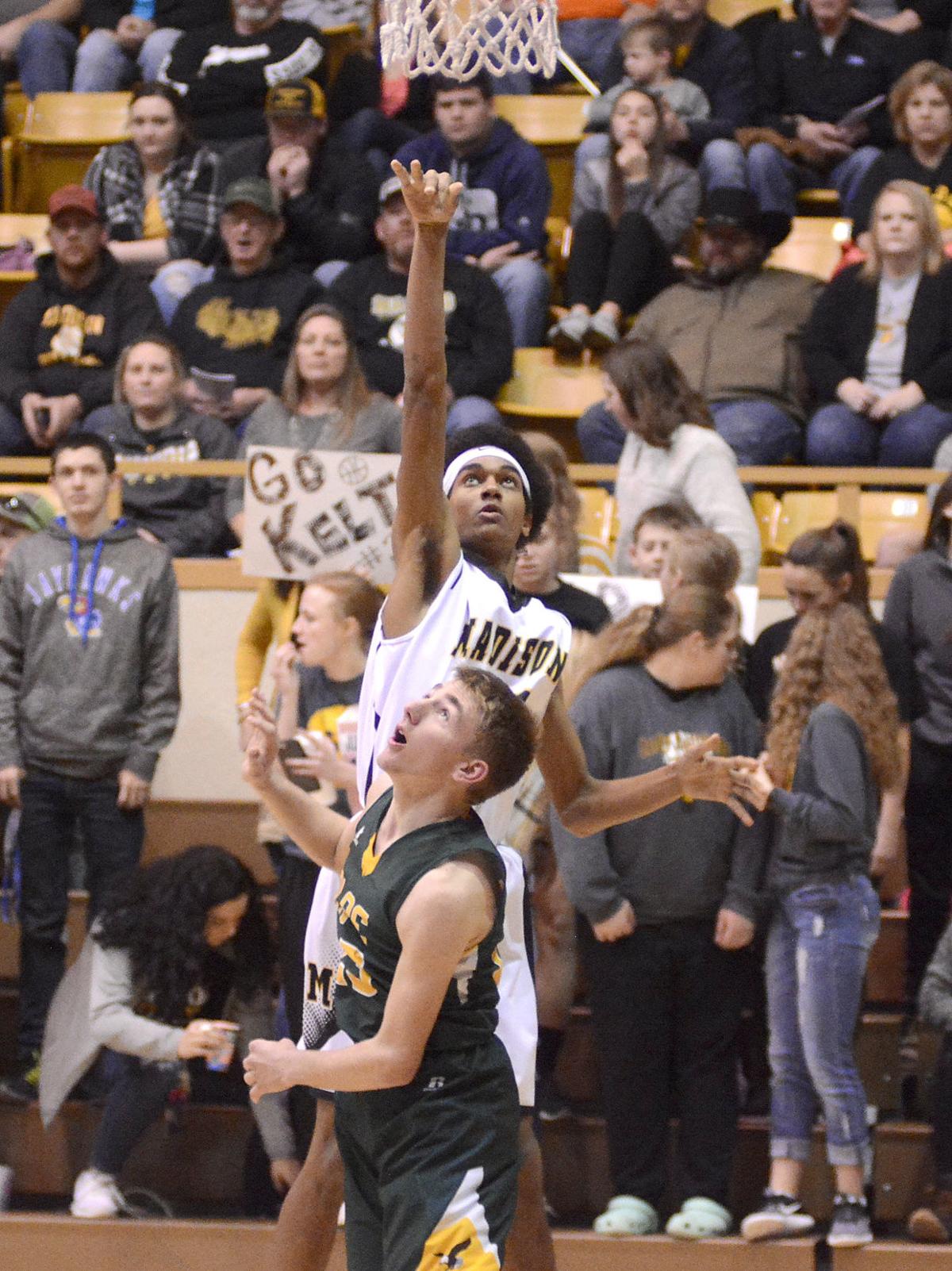 Kelton Buettner shoots the ball over an Olpe defender on Saturday afternoon. 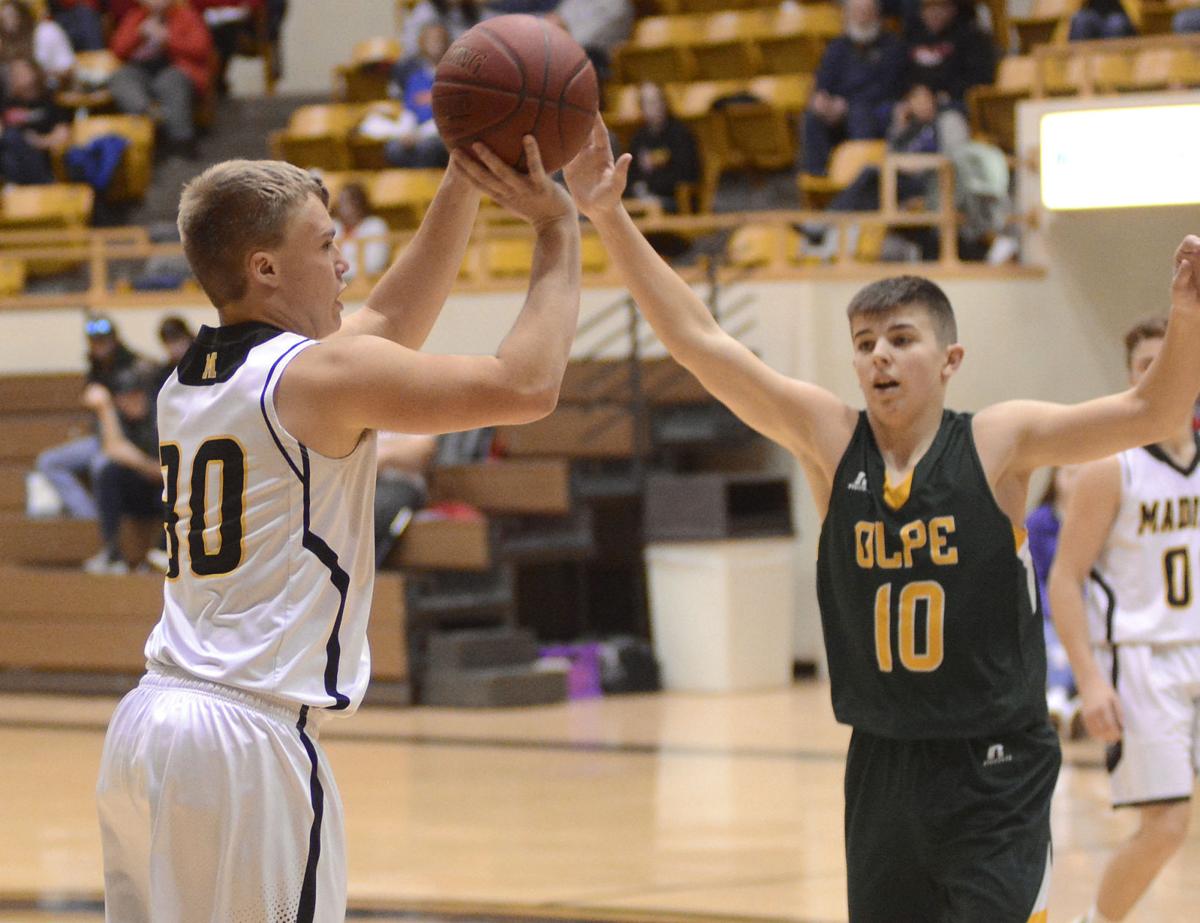 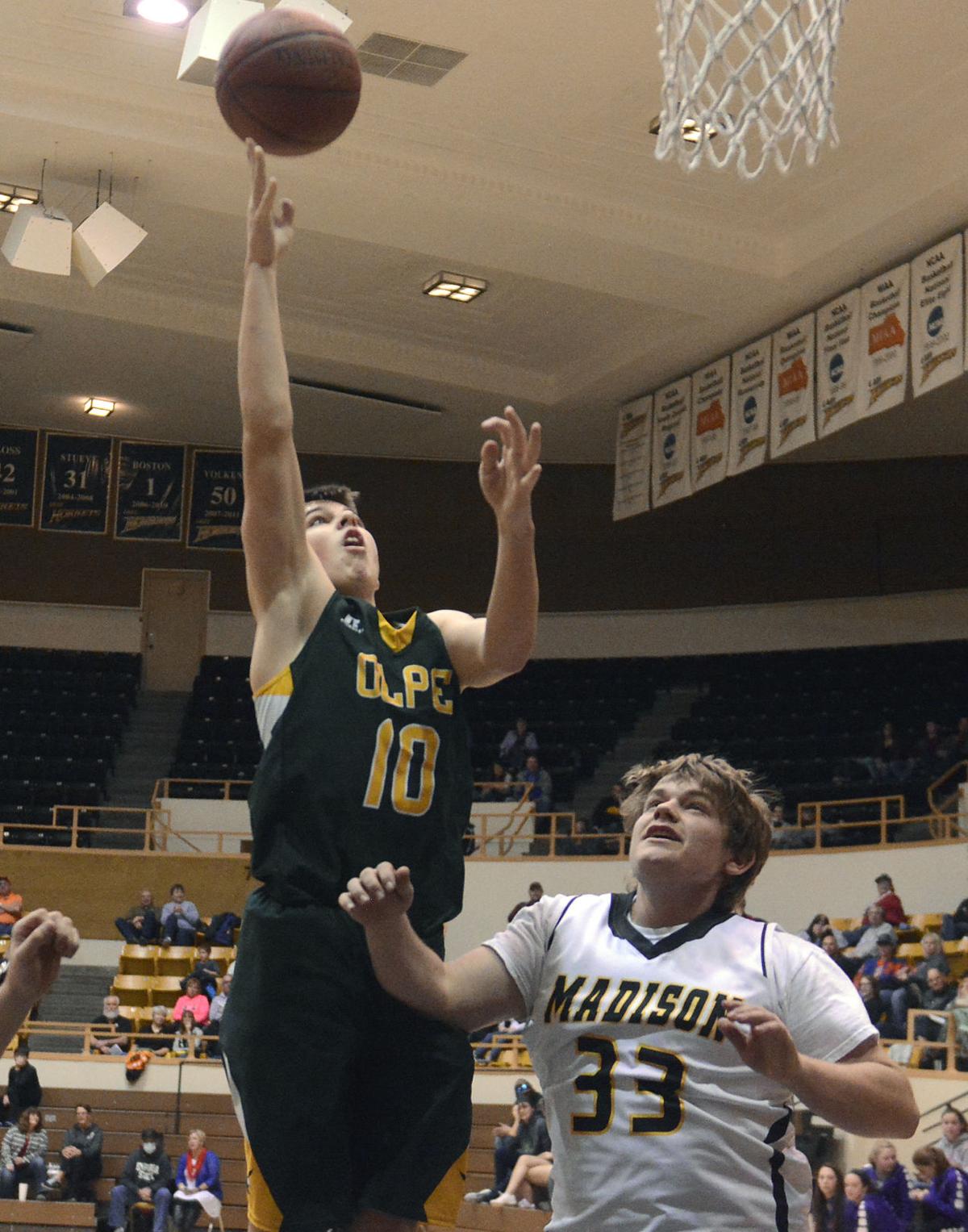 Olpe senior Camden Hoelting (21) scored a game-high 23 points for the Eagles as they secured third place in the Lyon County League Tournament with a 52-35 win over Madison on Saturday afternoon.

Kelton Buettner shoots the ball over an Olpe defender on Saturday afternoon.

When the Olpe and Madison boys squared off in the regular season, neither team truly felt it had a good pace of play established.

On Saturday afternoon, the Eagles were able to accomplish that much, placing third at the Lyon County League Tournament with a 52-35 victory over the Bulldogs.

“It’s good for us to be able to dictate some things,” Olpe head coach Chris Schmidt said. “We’re not a team that can fall behind eight, ten points and make it up real easy. We have to fight our way through it, so it was good to get off to a good start.”

The Eagles held a 10-point advantage late in the first, keeping Madison no closer than six before a 25-15 lead marked the scoreboard at halftime.

It was the second straight night that the Bulldogs struggled in the opening quarter, watching their opponent surge out to a quick start. Olpe’s Jordan Barnard scored seven in the first to ignite the Eagles, though it wasn’t long before senior Cam Hoelting took control.

“There in the third quarter, they made that little push early (while) we didn’t do much offensively,” Schmidt said. “They cut it to five. I thought our kids responded well and Cam had a good game.”

Hoelting scored 16 of his game-high 23 points in the second half, eventually helping stretch the Eagles’ lead out of reach in the fourth.

“Cam’s a competitor,” Schmidt said. “He struggled the first couple nights (of the tournament), especially shooting the ball. Defensively, he’s been pretty sound all the time. He ... had (Chase) Harrison tonight and he takes (defense seriously). He wants that (top assignment). He’s our leader. We’ve got to follow him and he did a nice job of getting us off to a good start and finishing it.”

Even though they fell short of the tournament’s title match, the Eagles saw it as an opportunity to look toward the postseason.

“It is tough, obviously this isn’t the (game) we wanted to be in,” Schmidt said. “We talked about how this (game) had a lot to do with down the road. Madison’s in our regional and right now, we’re right there with each other (in the standings). Anytime we can get a win over them head-to-head is obviously a plus. (And) there’s a good chance we’ll see them (again) down the road.”