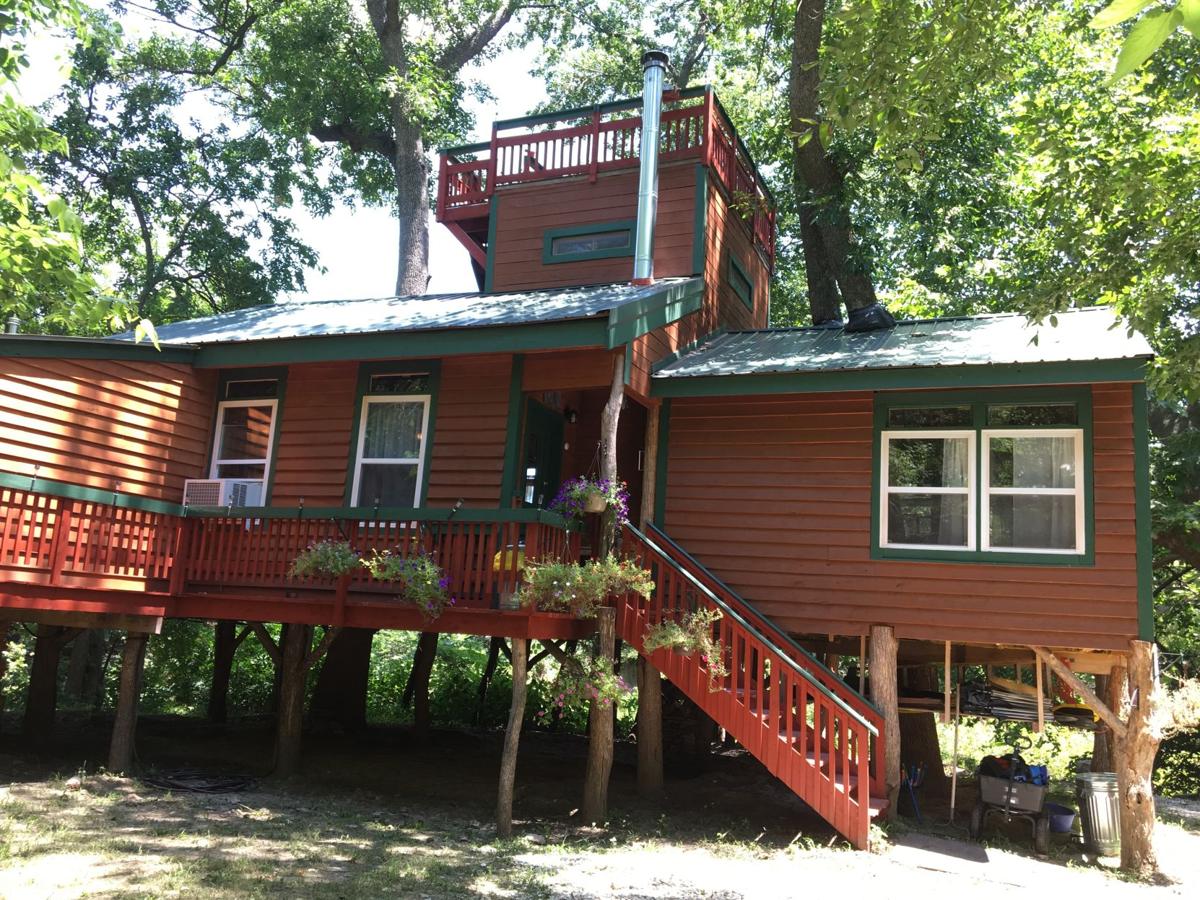 Middle Creek Tree House nestled in the woods of Elmdale. 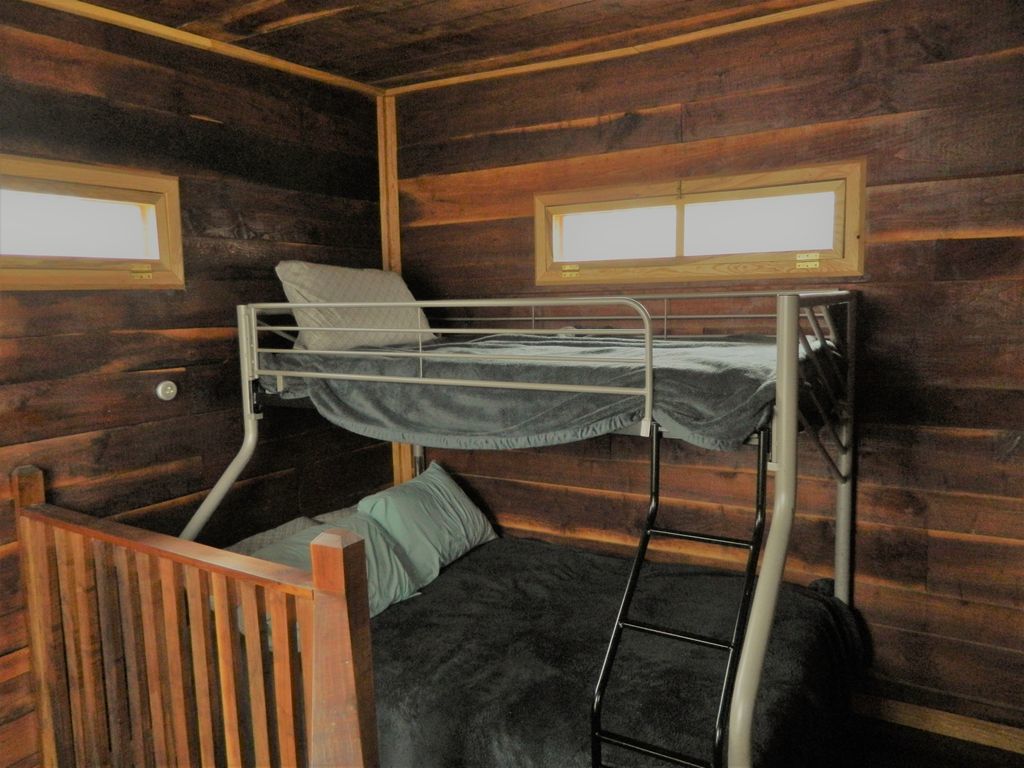 The Wells grandchildren decorated their own stained glass pieces, featured above main windows around the house. 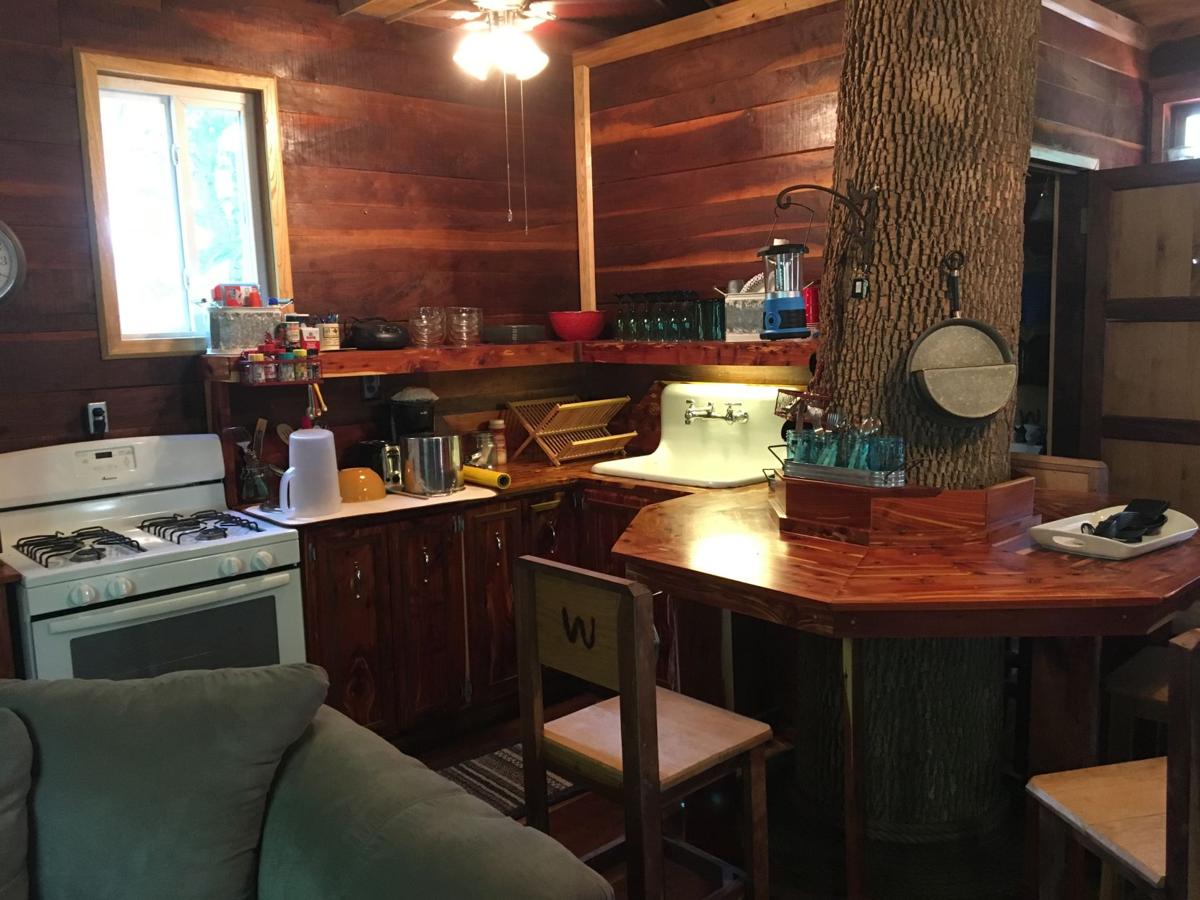 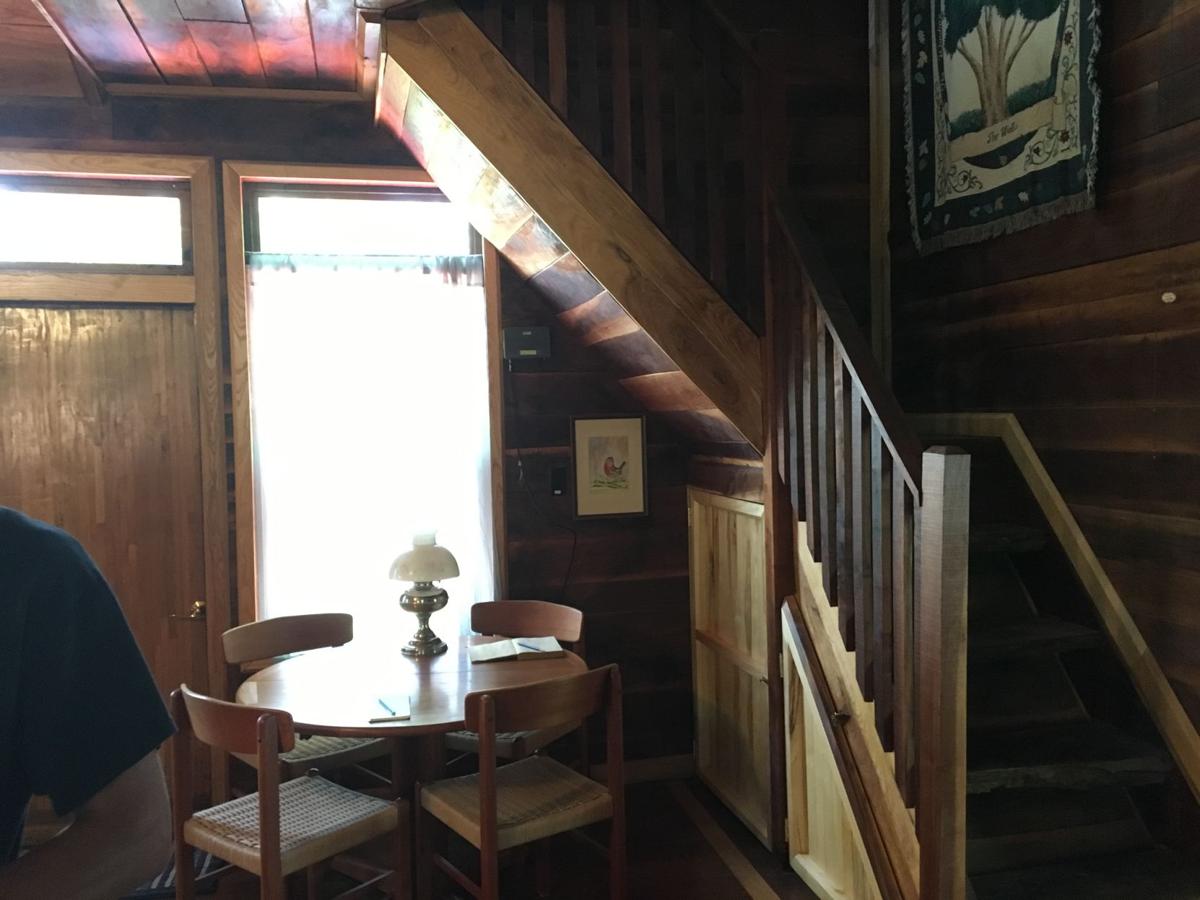 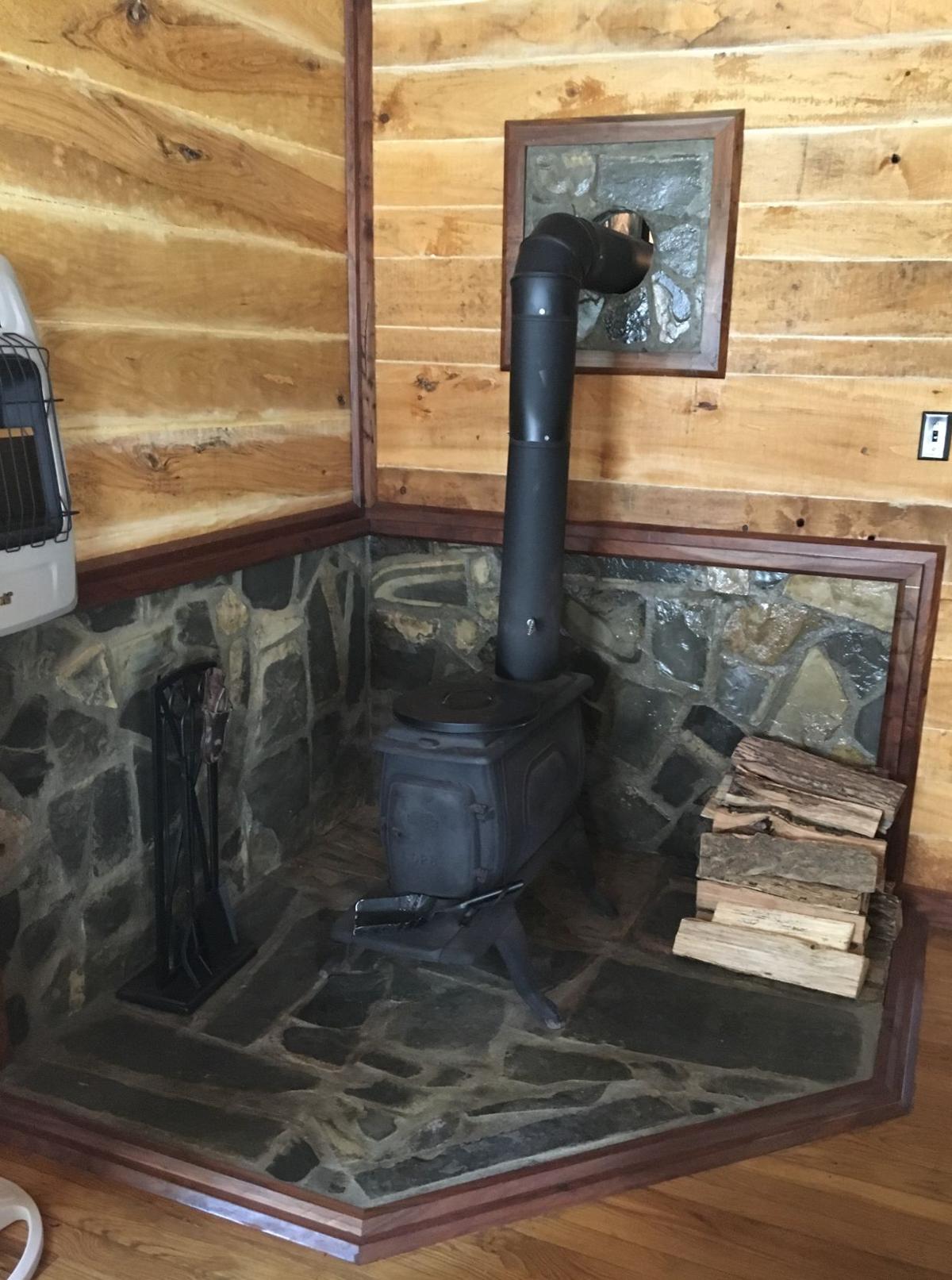 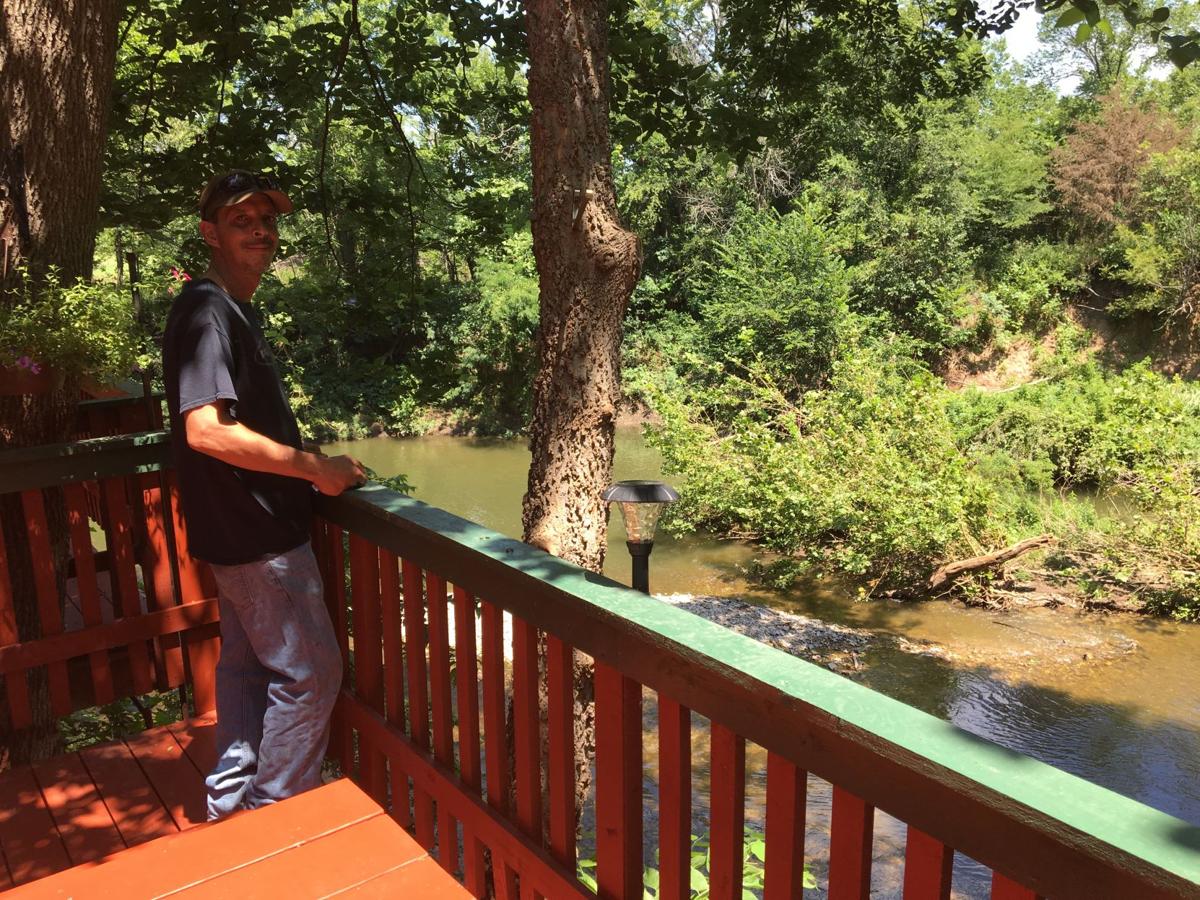 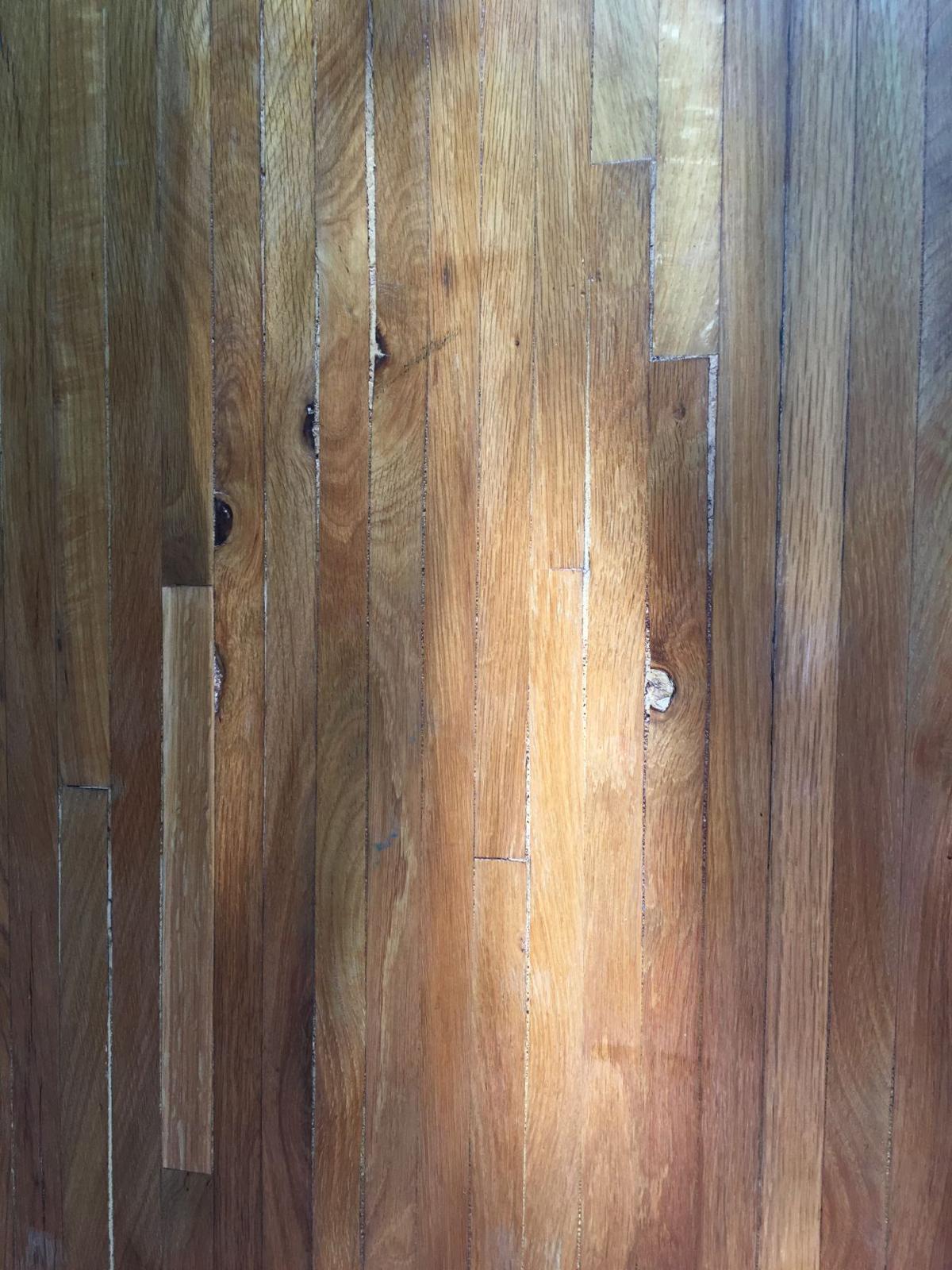 Linzi Garcia/Gazette Detail of the oak door leading to the deck. 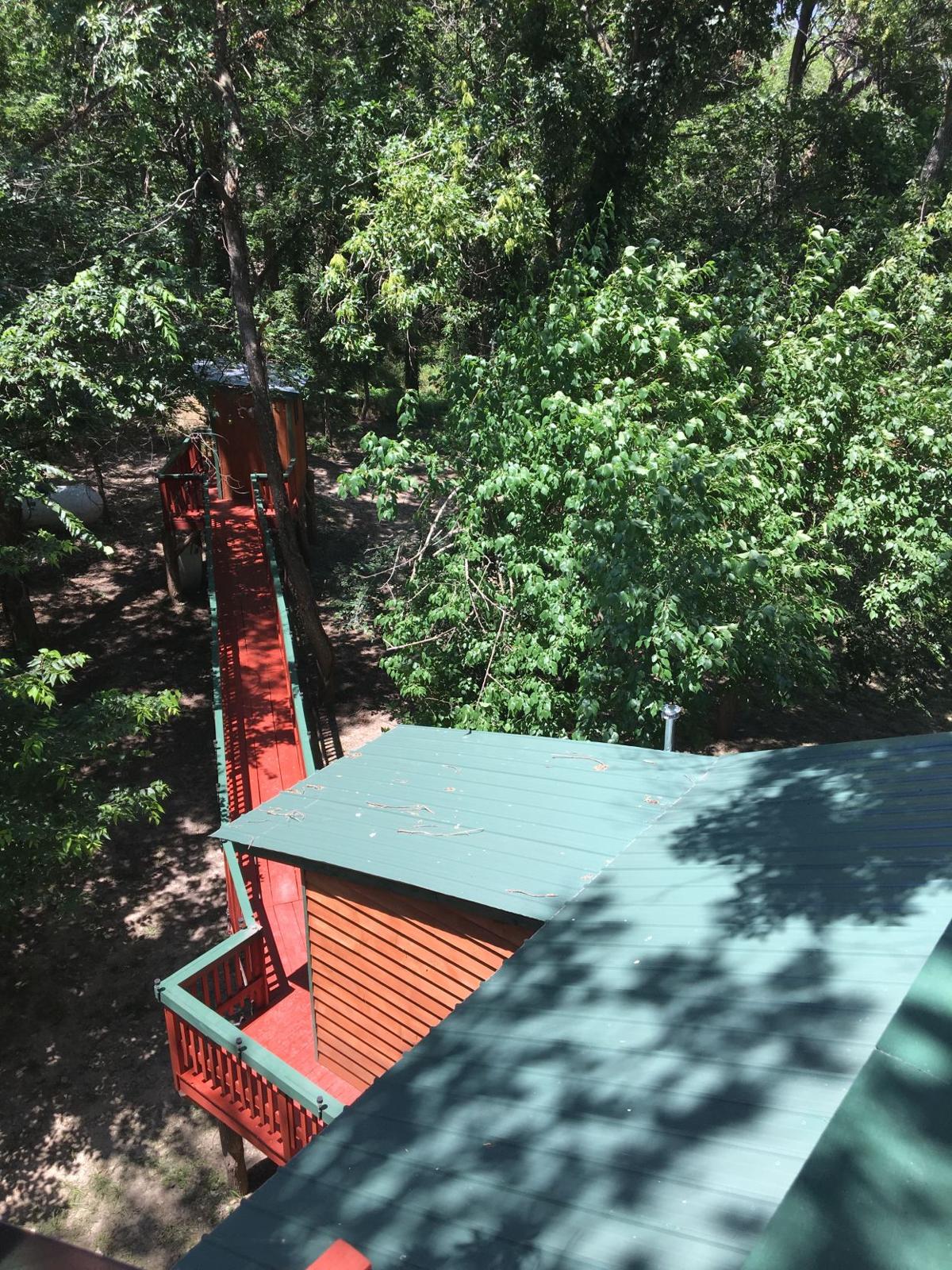 View from the upper deck. 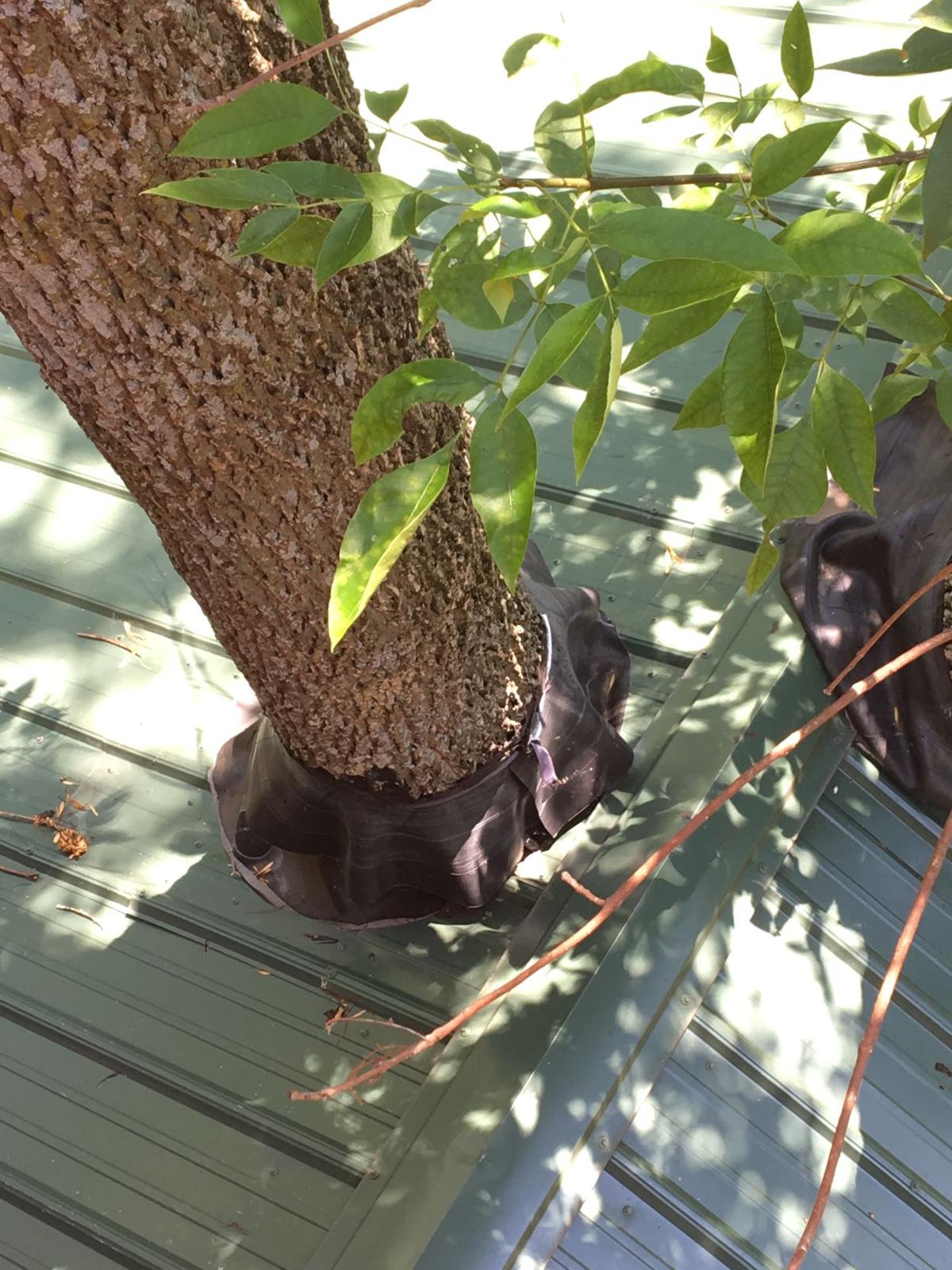 The area between the roof and tree is sealed by rubber and tar, allowing the tree to sway while concurrently preventing leaking. 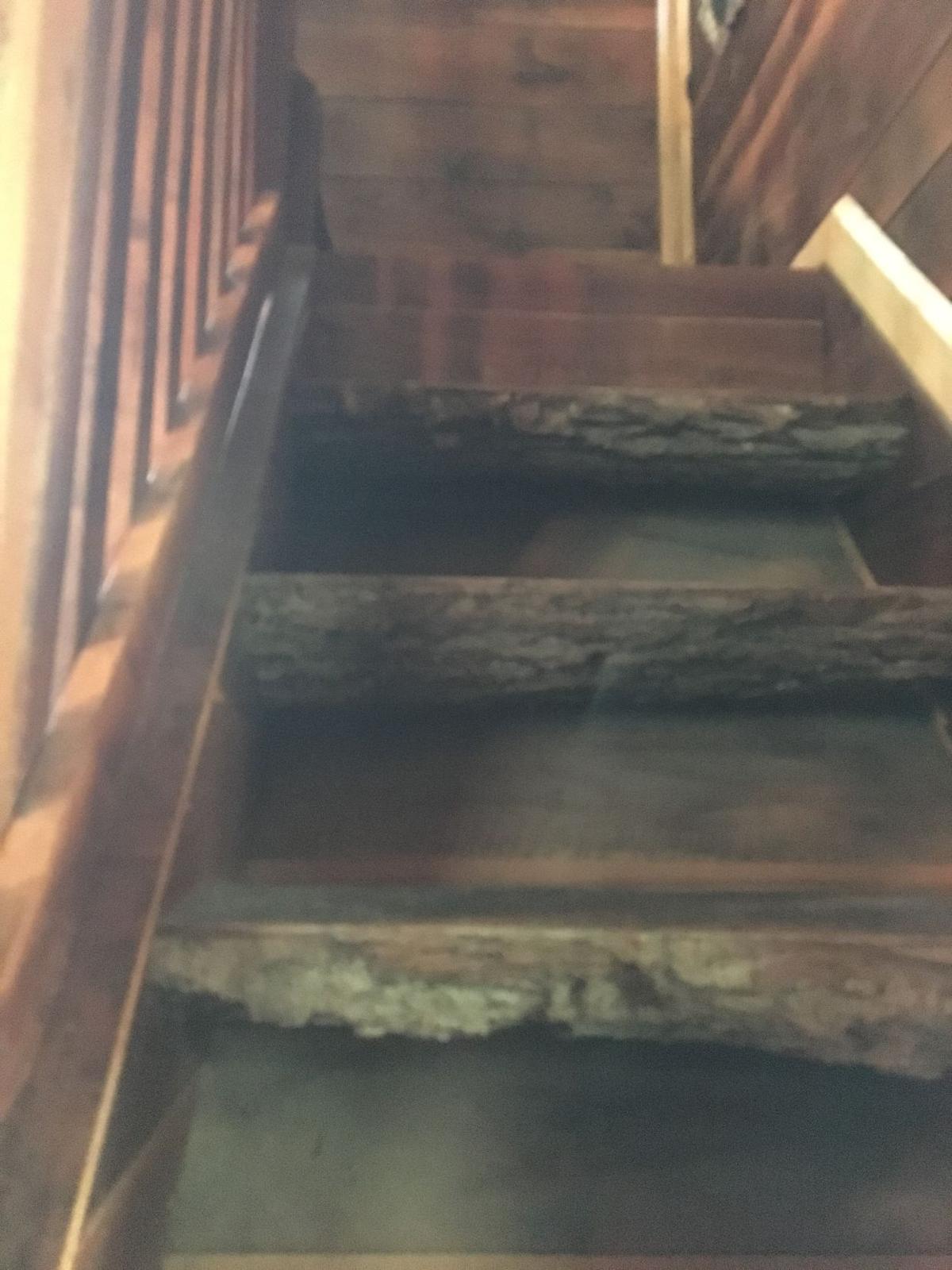 Leftover log pieces were used to create the stairs. 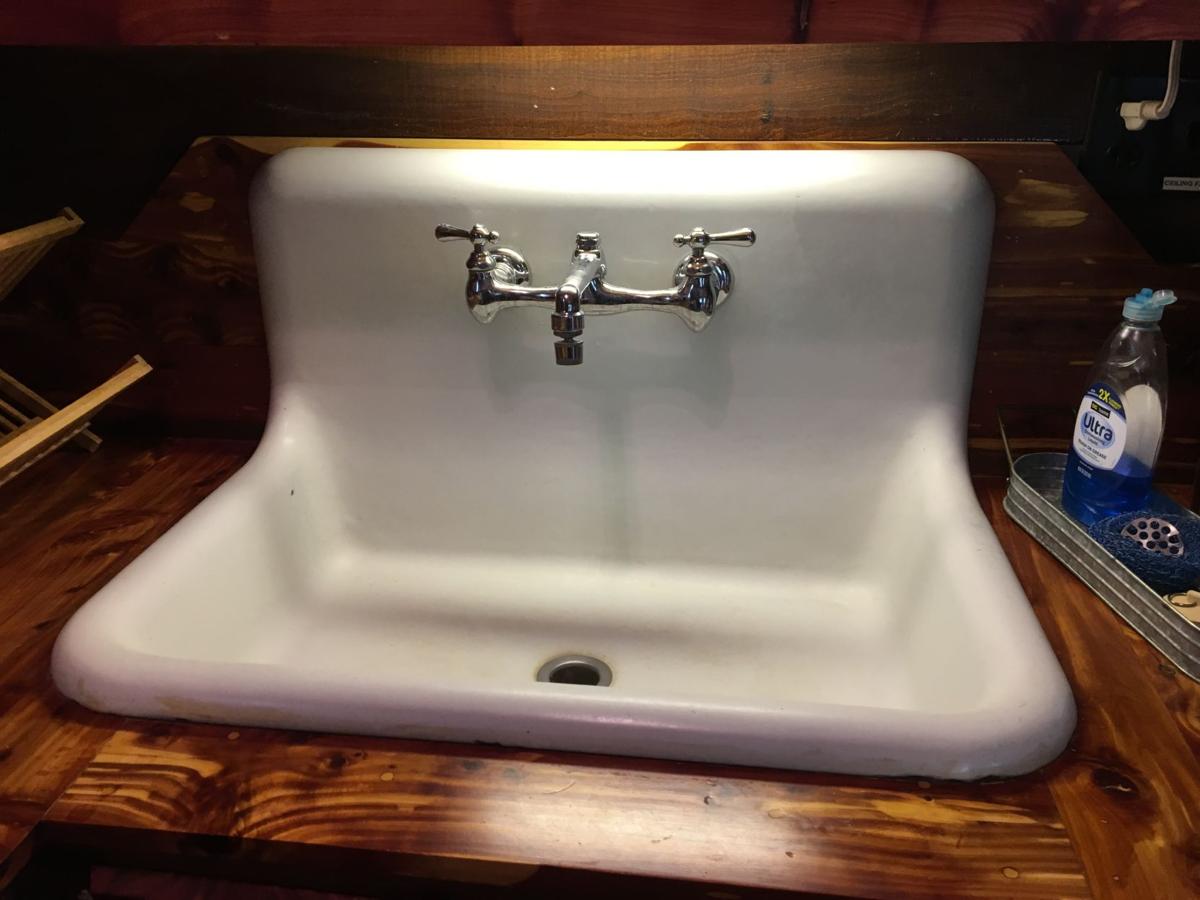 The sink from a Wells ancestor graces the kitchen. 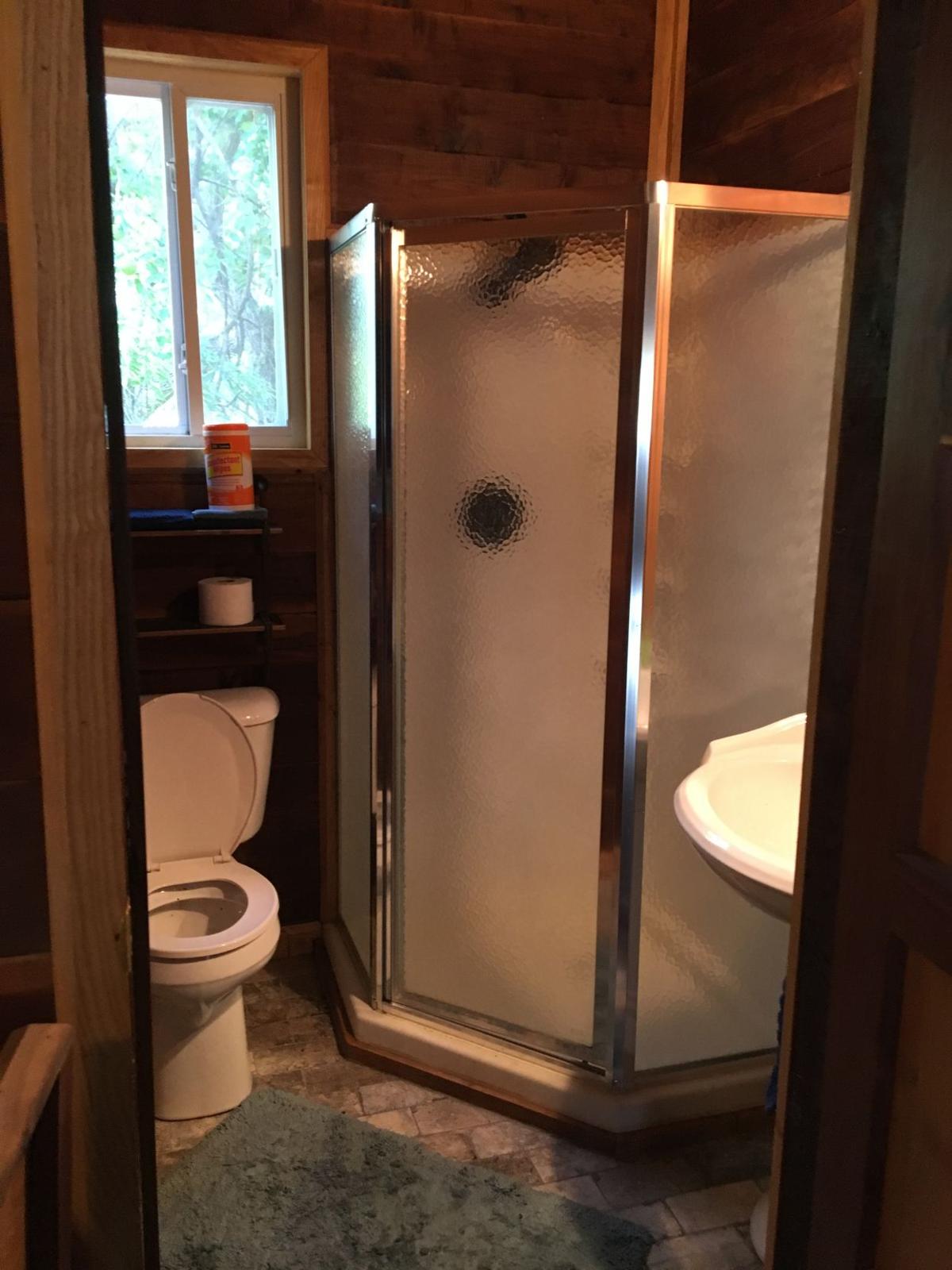 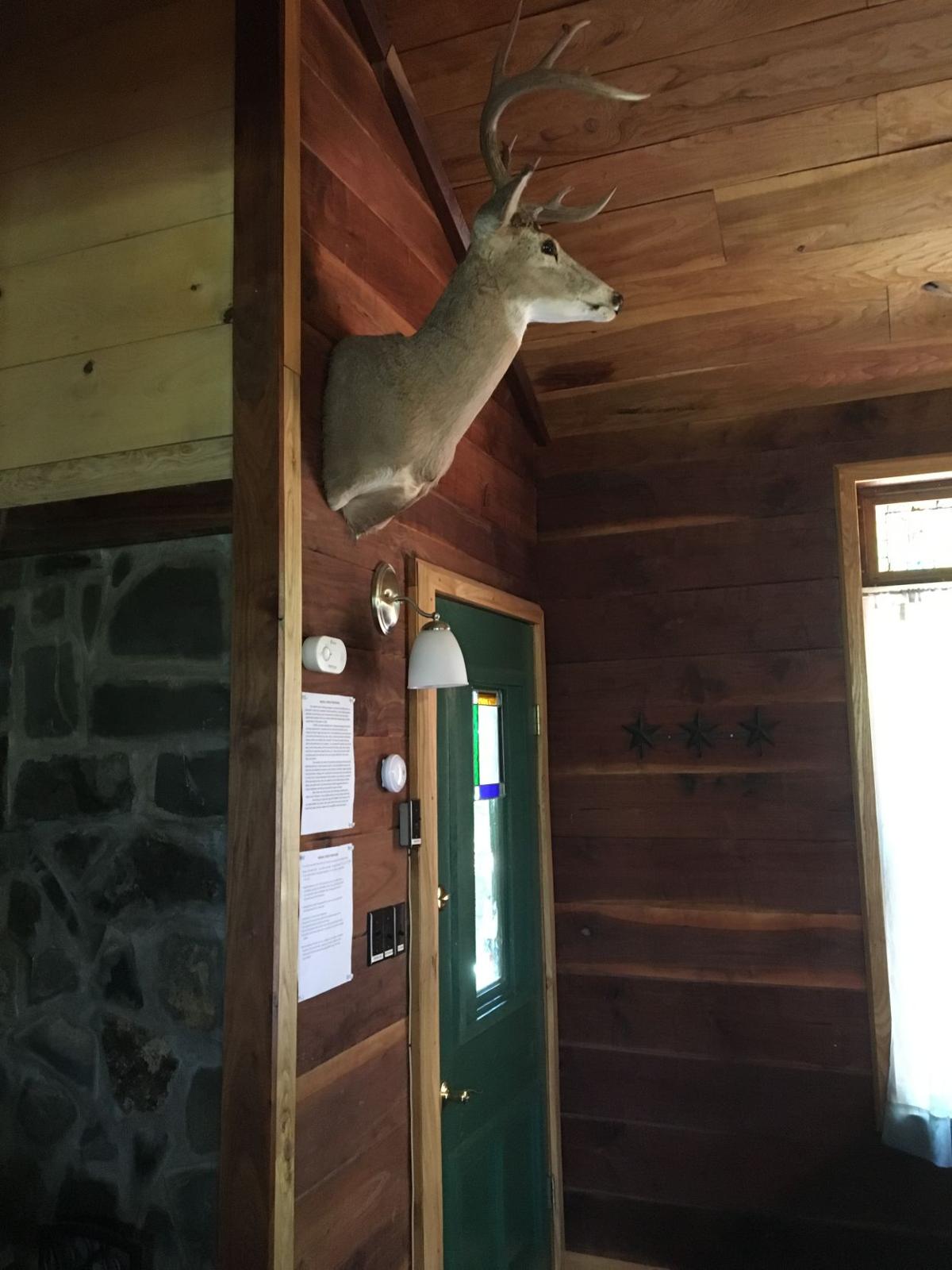 Linzi Garcia/Gazette A whitetail buck, hunted by Brad Wells, overlooks the front door of the house. 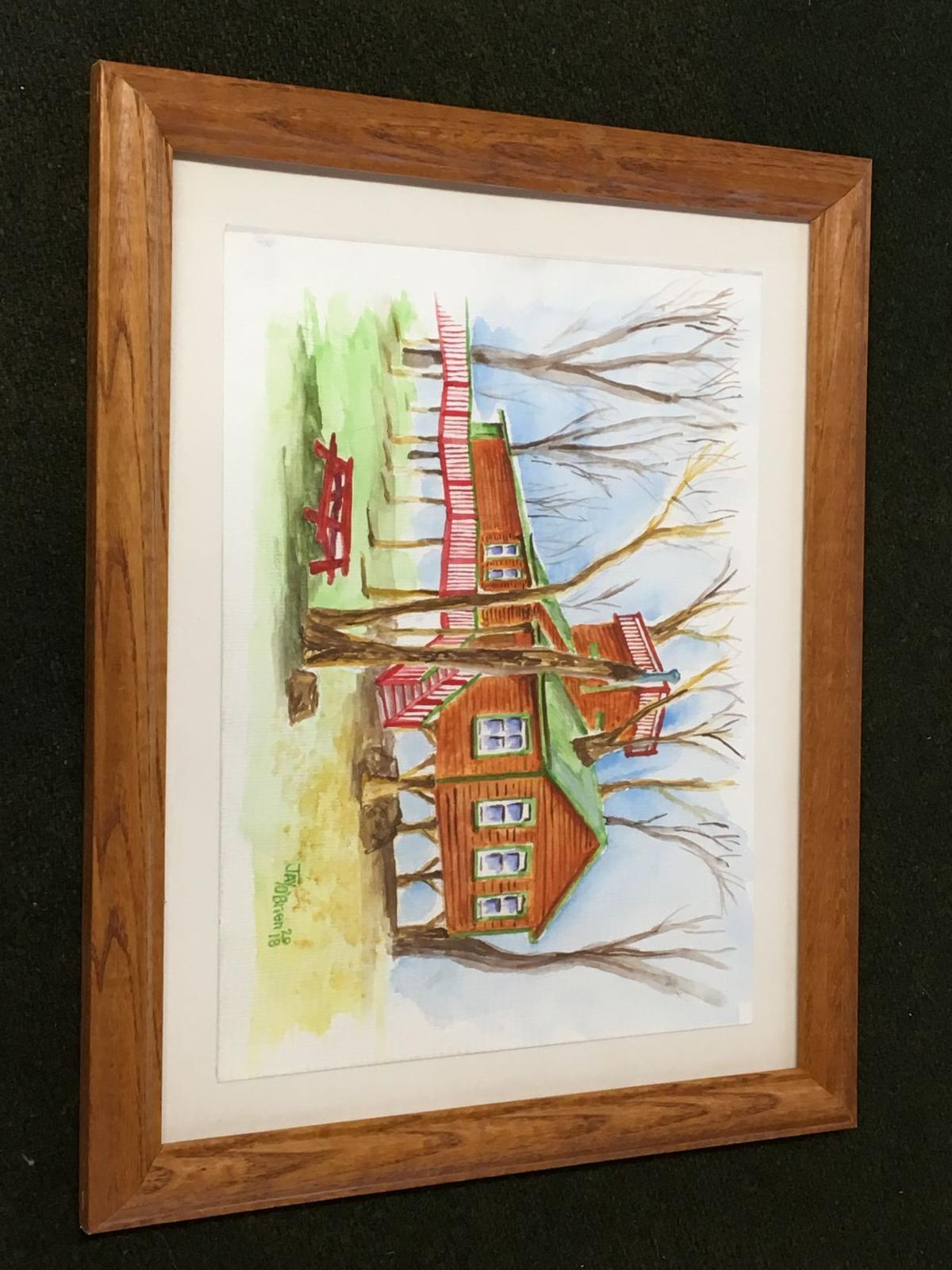 The drawing of the tree house a guest created gifted the Wells family.

Middle Creek Tree House nestled in the woods of Elmdale.

The Wells grandchildren decorated their own stained glass pieces, featured above main windows around the house.

Linzi Garcia/Gazette Detail of the oak door leading to the deck.

View from the upper deck.

The area between the roof and tree is sealed by rubber and tar, allowing the tree to sway while concurrently preventing leaking.

Leftover log pieces were used to create the stairs.

The sink from a Wells ancestor graces the kitchen.

Linzi Garcia/Gazette A whitetail buck, hunted by Brad Wells, overlooks the front door of the house.

The drawing of the tree house a guest created gifted the Wells family.

What began as a dream, quickly became a family and guest retreat.

Kip Wells and his son, Kip Wells Jr., always promised the next generation Wells kids a tree house. After the unfortunate passing of Kip Sr., Kip Jr. delved into the inspiration of the Animal Planet show Tree House Masters, it was time to fulfill the promise.

Kip Jr. had three requirements for the tree house: every piece of lumber had to come from their ranch property, it had to be off the grid and it had to, “Wow’ people. The ranch is about 1,400 acres in total, with about 80 acres around the tree house area. The trees were logged off the property and milled into lumber in Burdick.

“Not a lot of people get to work with their family,” Macey said. “Working with my dad — the majority of the time we work real well together.”

The Wells have owned the property since 1871. They chose a location where they all spent time playing in the woods and creek and where the house could overlook Middle Creek.

“I think the family kind of followed [Kip Sr.’s] lead on taking care of things and making sure [the land] was there for future generations,” Brad said.

Being located in a floodplain and having interest in the design, the house was constructed on hedge posts. The bottom of the house is insulated, keeping indoor temperatures comfortable.

According to Macey, the original plan began with a single bedroom. From there, the family continued adding ideas. Cory was the primary designer, though all had input.

The house is about 1,000 square feet and can currently hold about seven guests. There is a master suite with a queen bed and futon, a bunk bed upstairs with a full and a twin bed and a pullout couch. Amenities include a full kitchen, a bathroom with a stand-up shower, two decks with three picnic tables, WiFi, kayaks, nearby hiking trails and fishing locations.

One particular challenge presented itself when the untreated lumber they used to build the deck got water between the boards and the joists, which rotted the wood. They had to tear up and re-do the deck.

After about three years of construction, including building the road to the house, the family began staying in the house periodically and, eventually, opened it to guests after about five years since its inception.

And, if that’s not enough, the family plans to build an additional room. They hope to cater to larger parties who wish to stay in the tree house.

So far, they have experienced a diverse swath of guests — a man and his dogs, a softball team, families, Fallen Outdoors Veterans and more.

The Fallen Outdoors Veterans visit annually for a hunting trip. According to Brad, he thinks they were the first guests to stay in the cabin, prior to it even having wall heaters.

Another guest gifted the family a drawing he made of the house.

They have received only positive feedback and leave a notebook for guests to write reviews. One woman from Zambia, Africa, noted that she got engaged in the tree house.

Brad said he enjoys meeting the people who rent the house and sometimes shows them his favorite fishing spots, though the family will not come down to the house while guests are there, without being called to come by.

“I am a people-type of person,” he said. “I enjoy talking to people.”

When unoccupied by guests, the family still enjoys spending time at the tree house. They have shared Christmas dinner there, and the summer provides ample entertainment for the grandchildren.

“The kids love to do down and go wading in the creek,” Macey said.

One of Brad’s favorite things to do at the house is sit around the fire pit with the family kids, roasting marshmallows.

“You can’t not have fun here,” Brad said. “It’s some place that, when you walk away from it, you’re going to have a smile on your face, and you’re going to want to come back.”

Not only do the Wells brothers appreciate the entertainment, but they also appreciate how special every detail of woodwork is. The house is composed of oak, sycamore, walnut, hackberry, cottonwood, coffee bean, cedar, ash and hedgewood, all from trees on the family property. They utilized as much of the wood as was salvageable, constructing most of the doors from oak scraps and using unfinished log pieces to build the stairs.

“I really like the kitchen,” Macey said. “The cedar cabinets just came out really, really well.” He said he also really likes the bar around the ash tree.

Ash trees run through the house, and they can even be seen from the porch swaying in the wind. In order to adapt to the tree growth and movement, the holes through which the trees run are sealed with rubber, tar and a tie-down strap to maintain the trees’ natural flexibility and to prevent leaking.

The only lumber that is not from the Wells’ land is the front door, which was the front door of Kip Jr.’s great- or great-great-grandfather’s home. Above the front door, a taxidermy buck watches over the home — a 10-point whitetail deer Brad hunted on the property.

The kitchen sink also comes from the same ancestral roots. Another family touch is the stained glass accent windows decorated by each of Kip Jr.’s grandchildren.

The house has running water and electricity, run by a generator.

Other than a few peculiar maintenance things only concerning tree and other off-grid house owners, the family experiences more common household challenges like frozen pipes in the winter.

The Wells family also owns the Elmdale Trading Post, where brochures about the tree house and an eclectic collection of antiques and other objects can be found. When they participate in gun shows, half of their booth is dedicated to sharing information about the tree house.

“It’s unique,” Brad said. “It’s one of a kind. You’re not going to ever see anything like it.”

If the tree house endeavor is successful, Brad said the family is interested in building more, similar locations on the ranch.

To take a virtual tour, learn more about the tree house or make reservations, visit middlecreektreehouse.com.

Now really,,,, what good was this article to the public, without pictures?