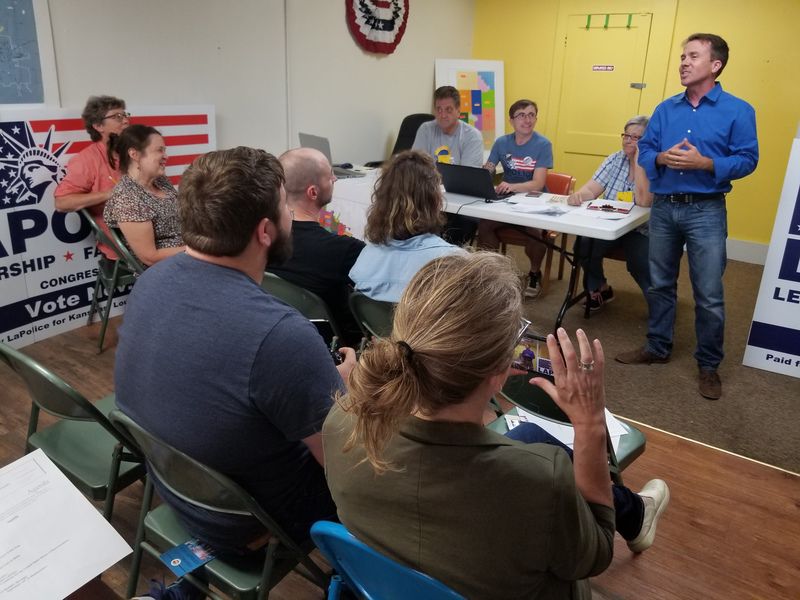 Lydia Kautz / GazetteCandidate for the House of Representatives Alan LaPolice spoke at a meeting of the Lyon County Democrats Monday evening. LaPolice is campaigning to unseat Rep. Roger Marshall. 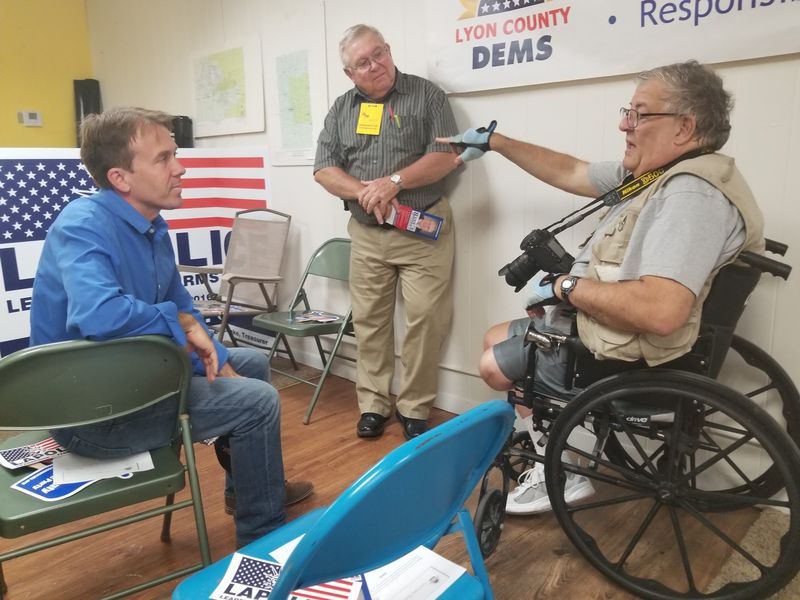 Lydia Kautz / GazetteCandidate for the House of Representatives Alan LaPolice spoke at a meeting of the Lyon County Democrats Monday evening. LaPolice is campaigning to unseat Rep. Roger Marshall.

Alan LaPolice, who is challenging Rep. Roger Marshall for the latter’s Kansas District 1 seat in the U.S. House of Representatives, visited a meeting of the Lyon County Democrats Monday evening.

He answered questions and talked about his stances on a variety of issues, including free and fair trade, fiscal responsibility, family values and defense — all of which he said he favors.

He addressed what some have described as a trade war the United States is currently embroiled in with countries such as China and Canada.

He said trade would be his main issue, if elected.

He spoke about the separation of children and parents at the U.S. - Mexico border, which he said is still going on and which he’s against. His stance was developed in part because his wife, Sonia, was brought to the United States from El Salvador by her mother, who sought asylum as a political refugee.

“I believe that every issue needs to be dealt with directly,” he said. “I have made clear from the very beginning that I would never, never stand in the way of a woman discussing a procedure with her doctor, especially in the case of rape, incest, life of the mother and viability of the fetus. I respect a woman’s right to choose, I understand that this very difficult issue must be dealt with between a doctor and a patient and that’s the best place for it, but I personally — I’m a pro-life Catholic and I will let my faith guide me as much as it has to. But then I’ll let reality guide me the rest of the way.”

He said he is in favor of equal pay for equal work and guaranteed maternity leave for women.

On the subject of defense, he talked about his own service as an infantryman in the Army and about former President Dwight D. Eisenhower, who he said was a personal hero of his.

“Eisenhower took defense money and he invested lots of it into infrastructure and he said, ‘This is national defense boys and girls, this is how we save a nation — we build roads, we build bridges, we put money in schools and science, into technologies,’” LaPolice said. “So that’s what real defense is — defense is against all those things that are coming down the road that you’re not prepared for. I believe in that kind of defense.”

He said he intended, if elected, to invest in roads, bridges, schools, science, technology and broadband access in rural communities.

LaPolice said he’s adamantly against big money in politics. He talked about money in politics and about refusing donations in a previous political race because the donor requested a loyalty pledge in exchange for the money.

LaPolice said former Speaker of the House John Boehner and his team offered him money in exchange for loyalty.

“I told them no,” he said. “I said no to John Boehner, at the time the most powerful man in the United States and the person that could have guaranteed me victory in the 2014 election. Told him no and I might be foolish for doing that, but I stand on my ethics and I always will.”

“That, folks, that right there in a nutshell is everything that’s wrong with politics,” he said. “If somebody can figure that out, if somebody can fight against that, then we can turn back and make everything right about politics again. Our government is there for us — we the people. It is to be of the people, by the people, for the people. And the founding fathers, they said this — they said, ‘A government derives its just authority from the consent of the governed.’”

LaPolice is also against career politicians, he said. He’s in favor of term limits and would vote against making Nancy Pelosi Speaker of the House again. Instead, LaPolice said he’s in favor of another Democrat for speaker — Rep. Andrew Schiff of California, a member of the House Intelligence Commission.

He talked about manmade global climate change — which he believes is a serious issue — nuclear proliferation, which he’s against, and guns, for which he believes the Second Amendment allows for the regulation.

“I absolutely believe in universal background checks, just like 80 percent of America does,” LaPolice said. “I believe that Congress should take away that [Militia Act] that prevents the CDC from investigating the connection between these mass murders and the use of guns. I would never take a single gun away from anybody, just know that, because I think that would just be untenable. I would never take a gun away, unless they committed a crime or they were suspected of a crime or they had a mental impairment that made them dangerous with a gun — and that’s already in effect.”

He said he would like to add a 2 percent transactional tax to each purchase of a firearm or ammunition, which would go to mental health research alone, he said.

LaPolice is in favor of keeping the Affordable Care Act. He’s in favor of the public option, specifically offering Tricare for those who want it and qualify for the service.

He’s also in favor of bringing back net neutrality.

LaPolice talked about his background, which included growing up on a dairy farm in Kansas, serving in the Gulf War, and working in education as a teacher and, later, a superintendent.

Democratic candidate for State School Board Seat 7 Jim Hannon was also at the meeting and spoke briefly to those gathered.

“I am an experienced teacher,” he said. “I taught for 39 years right here in Emporia. After I retired the first time, I worked at ESU as an adjunct for a period of time mostly supervising young, aspiring teachers during their student teaching period. In the last couple of years, I returned to the classroom and I’m now a paraeducator, working with students who have learning disabilities, so I’ve seen things from teaching advanced placement classes all the way down to working with kids that have severe learning disabilities. I am an absolute proponent of public education. I do not believe that one single tax dollar should go to a private school or to a charter school.”