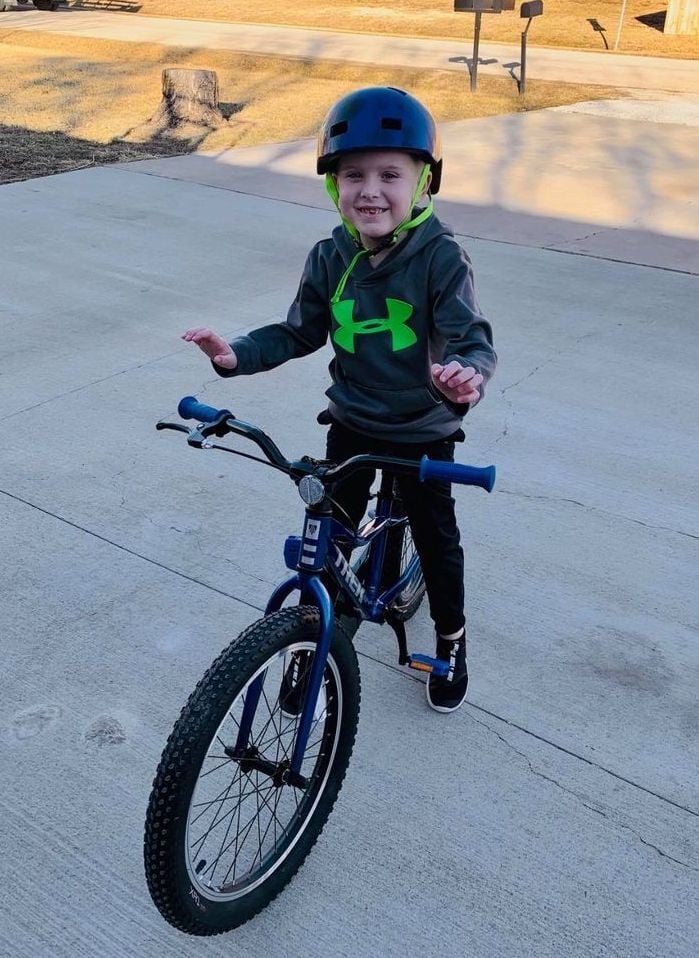 James poses for a photo before leading the Olpe Downhome Fun Ride on July 10. 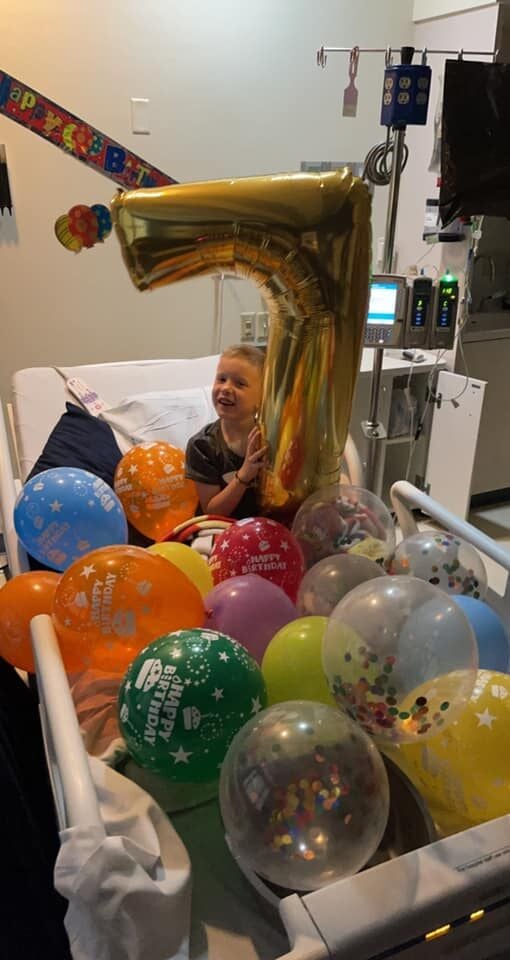 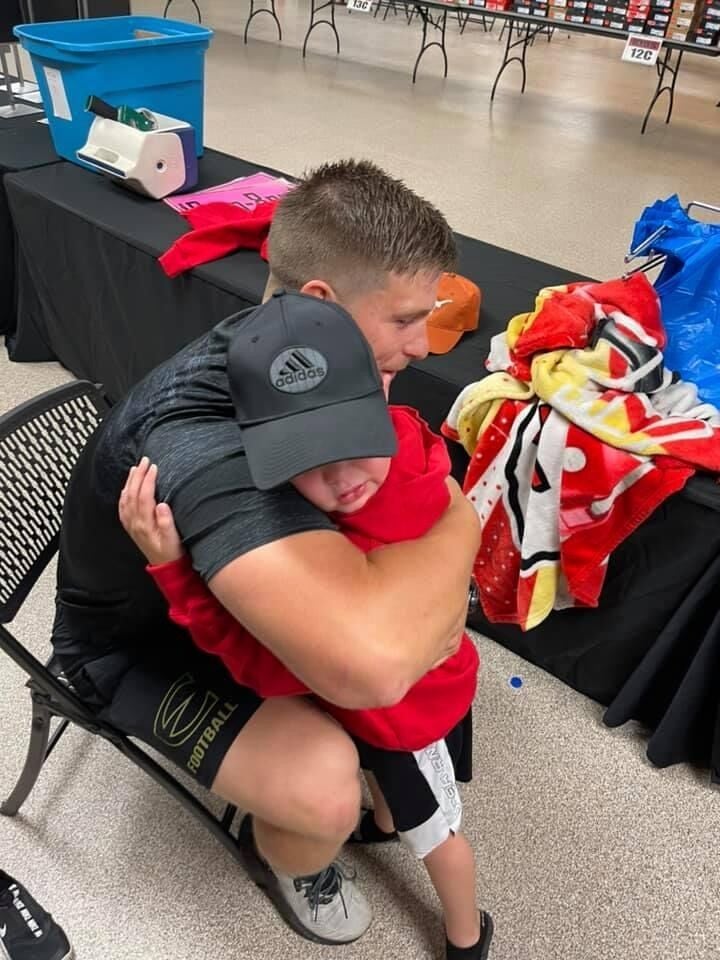 Parker Bass surprises James after he had to leave the ESU football camp early. 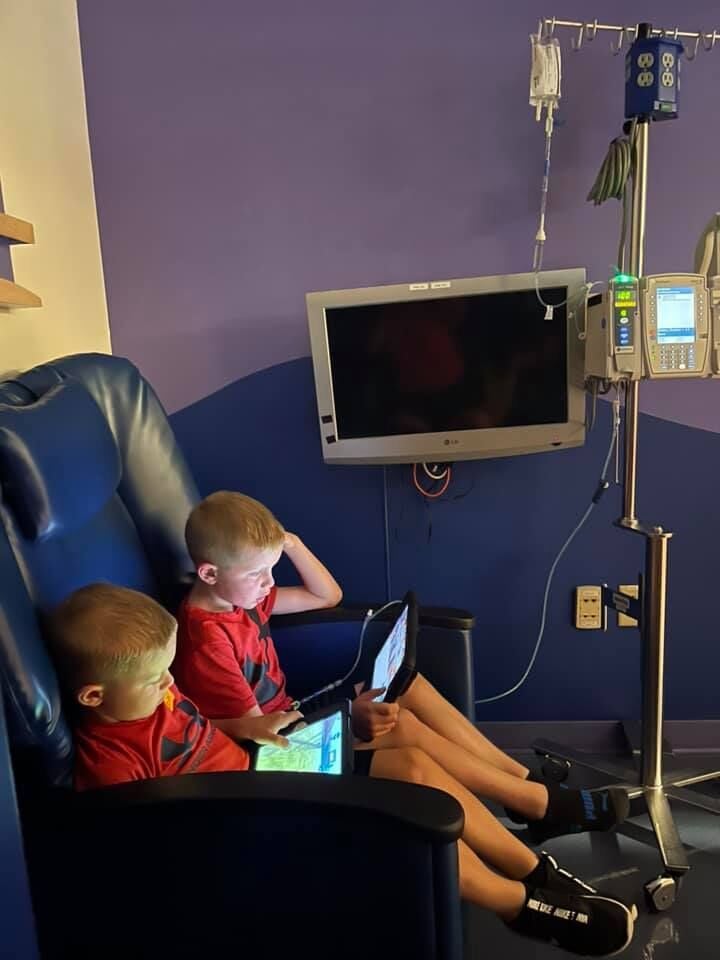 James and Noah play a game while James receives his treatment at Children’s Mercy. 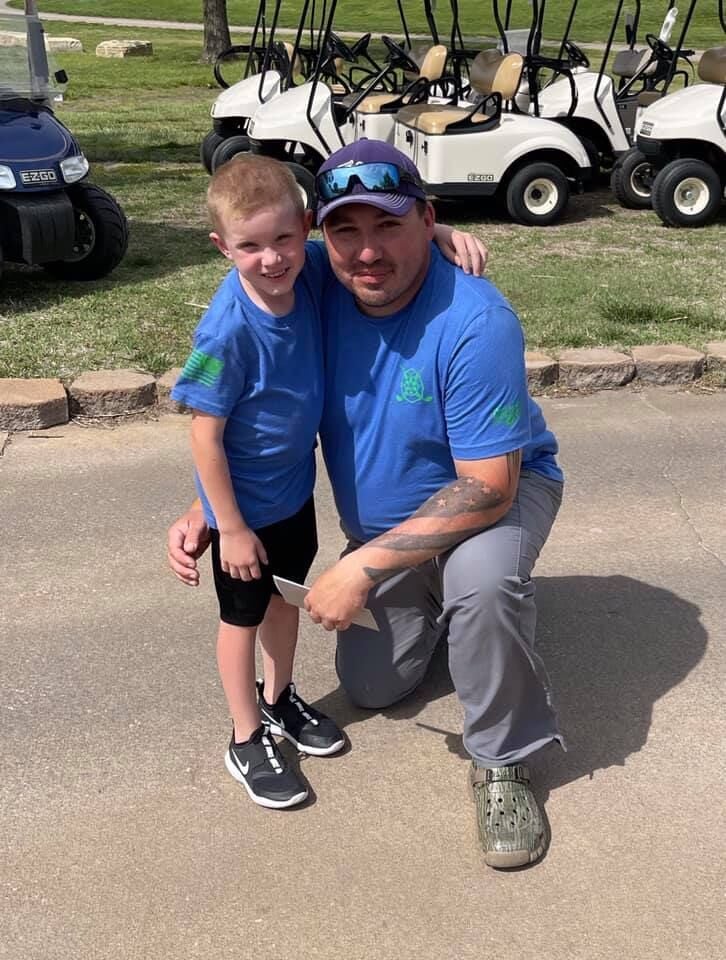 Zac Lujano presents James with a $15,000 check on behalf of the Vince Garcia Legacy Fund. 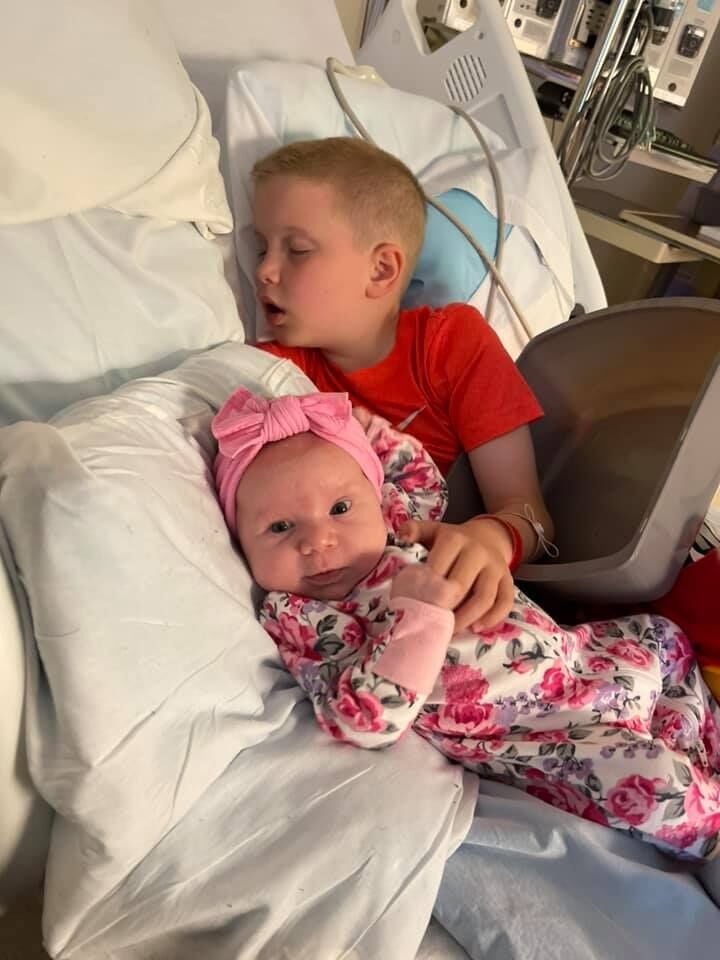 James hugs his baby sister, Kate, while he sleeps. 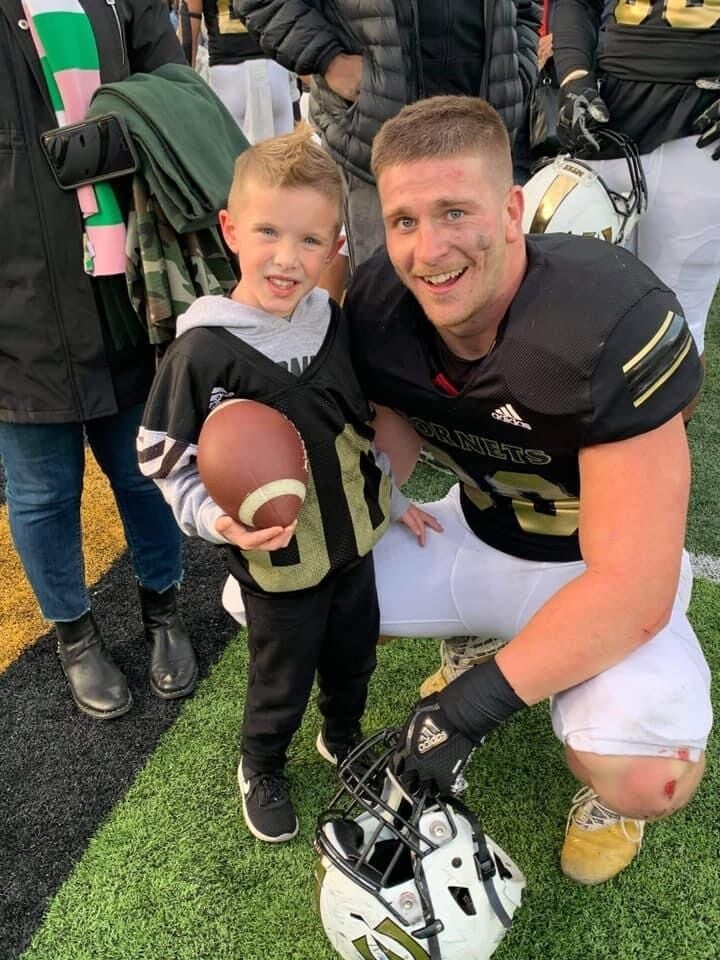 James poses with Parker Bass when he was around 5-years-old. He has been a huge fan of the player for years.

James poses for a photo before leading the Olpe Downhome Fun Ride on July 10.

Parker Bass surprises James after he had to leave the ESU football camp early.

James and Noah play a game while James receives his treatment at Children’s Mercy.

Zac Lujano presents James with a $15,000 check on behalf of the Vince Garcia Legacy Fund.

James hugs his baby sister, Kate, while he sleeps.

James poses with Parker Bass when he was around 5-years-old. He has been a huge fan of the player for years.

James Nunley has been battling acute lymphoblastic leukemia since his diagnosis on Dec. 8, 2020. But the 7-year-old Olpe resident has faced aggressive rounds of chemotherapy with a positive outlook and as much activity as possible.

“He’s doing okay; he struggled a little bit recently with the side effects of chemo, and unfortunately, recently he has not made counts high enough to continue with chemo weekly so some of his treatments have been getting pushed back,” said Angela Nunley, James’s mother. “Our hope is that by next Monday, his numbers will be okay for this new round of chemo next week.”

James’s current round of chemotherapy includes weekly treatment at Children’s Mercy, along with oral chemo and chemo shots at home. The good part about this, though, is that after James’s current round of treatment, it could be cut down to once every 10 days, and then down to once every 28 days. But, he’s still not close to being done with treatment even if his numbers look good.

If everything goes according to plan and there are no complications, the family is looking at around two more years of treatment. Acutie lymphoblastic leukemia has a high rate of relapse in children James’s age.

“Right now, we are still in pretty intensive chemo,” Angela Nunley explained. “This cycle of chemo that he is in right now is 57 days. That is when everything goes to plan but unfortunately, with numbers not being high enough, that sometimes gets extended. Depending on if his numbers stay high enough and there are no other signs of complications within that schedule, he will have about two full years of chemo left. With his type of cancer specifically, it takes a lot of continuous treatment because he is in a high category to relapse.”

An athlete at heart

Although James has been struggling with the side effects of his treatment, he has tried to spend time participating in a variety of sports.

“He sure tries, on a daily basis, to do something that seems normal,” Angela said. “He did finish up soccer season, he played coach pitch and currently he is in golf camp. He has done a football camp and a basketball camp this summer, but we just either take a lot of breaks, or he sits there and observes when he doesn’t feel good enough to play.”

Sports have always been one of James’s favorite activities and he begs to attend anything sports-related; it was when James slept through a Kansas City Chiefs game in December that the Nunleys realized something might be wrong with their usually active child.

“It doesn’t take a lot to bring joy to his face when it comes to athletic opportunities because that boy loves sports with his whole heart,” Angela said. “There aren’t many athletic events that happen in this area that he isn’t going to ask to go to or participate in.”

With delays in treatment and side effects that James is experiencing, Angela Nunley is hoping that by the time school starts, he will be able to have a somewhat normal school year.

“These last couple months have been a really big roller coaster ride when it comes to his treatment,” she said. “We are definitely learning what it means to be parents of a child with cancer. We’re just hoping to be able to start this school year a little bit normal, as normal as we can for him. He loves school. I wish I loved school as much as he does.”

All of the surrounding communities have spent an abundance of time trying to fundraise to help the family with the high costs of treatment. For example, James was recently awarded a check for $15,000 from the Vince Garcia Legacy Fund. This fund started out raising money for Vince Garcia, who lost his life to ALS, and now chooses a person in the community who is struggling with cancer.

“Through people reading our story, knowing that my husband [Michael], is a firefighter and paramedic for the city, they reached out and asked us if they could do this for James,” Angela said. “We are very grateful, and it’s very humbling that people that we have never met are willing to help us.”

James recently led the Olpe Downhome Fun Ride. He was able to participate in this because Angela’s cousin, Shawn Coble, was in charge of the bike race this year. Coble has participated in the Unbound Gravel race several times, and James has always been a huge supporter of him.

“It was just a wonderful opportunity because a lot of things that James wants to do, unfortunately, don’t always happen because of how he’s feeling or the cancer in general, so to have that opportunity to help lead a race with bikers was just really special to him,” Angela said.

James recently attended the ESU football camp, where he was only able to participate for a couple of hours before he got sick. His favorite player, Parker Bass, was at the camp, and James was upset that he didn’t get to see him.

“His former favorite player [Parker Bass] happened to be in town and he came to the camp, and James wasn’t able to go, so they actually brought that player out to where he was, and it just meant the world to him,” Angela said. “He has been a fan forever. There are pictures from when he was 4 or 5 wearing Parker’s jersey at an Emporia State game.”

The Nunleys had a baby girl, Kate, in March, and she has been able to help James right from the start.

“I was about 22 weeks pregnant when we found out about James’s diagnosis,” Angela said. “The oncologist explained to us that the cord blood from Kate could be stored, so if James was to need a stem cell transplant or a bone marrow transplant, there are things found within the cord blood that can be very beneficial. She could possibly be a match to James if he was to ever need some sort of transfusion from the stem cells that were in Kate’s cord blood. We are very, very fortunate that Kate got to help her brother from day one.”

A hard road ahead

With having a new baby, James’s treatment, and another son, five-year-old Noah who has Hirschsprung’s disease, the family has been extremely busy. Without help from the community, family and friends, it would be next to impossible for them to get the children the attention that they need. Luckily, with new regulations at Children’s Mercy, James’s siblings have been able to be in the room with him.

“We have friends and family in Kansas City who have stepped up when we are there for long days, or multiple appointments where they allow us to stay at their house in between, or offer to watch our other kids for us so we can give whichever child needs our attention at the right time,” Angela said. “It requires a lot to take your child with cancer and your newborn to stay in the hospital quite often.”

Another fundraiser for James is coming up on Aug. 14, which will be a golf tournament in Madison organized by Kale and Mikayla Schankie. Because of people like them in the community, the immediate bills for treatment are covered, which relieves a great amount of stress off of the family.

“2020 definitely wasn’t easy on us as a family, and especially with how long James will need treatment for, the continuous care that he will need, and the extra medicine that he needs, it starts to add up,” she said. “To be able to provide that with the financial care that people have given us, it means a lot.”

Angela Nunley also mentioned that it isn’t just the Olpe community that is supportive of them. All of the surrounding communities have stepped up, and they couldn’t be more grateful.

“It’s not just the Olpe community; it’s the Emporia community, it’s the Hartford and Neosho Rapids community, it’s the Lebo and Madison communities who have all really stepped up for our family and we will never be able to repay everyone for everything they have done for us,” she said. “We just hope that we can continue to pay it forward and give to those who are also in need. We are very grateful for what has been given to us.”

For updates on James’s treatment and upcoming fundraisers, join the Facebook group @TEAMJAMES.