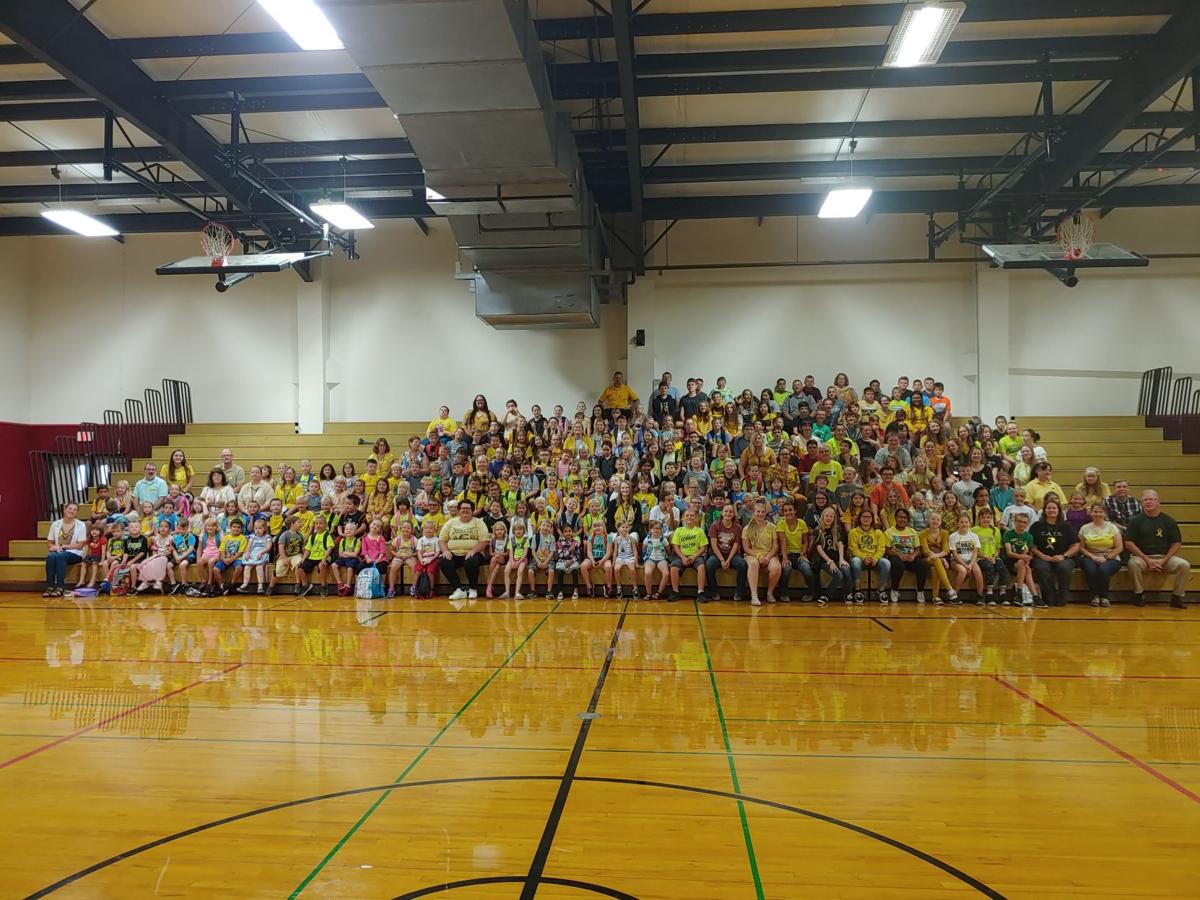 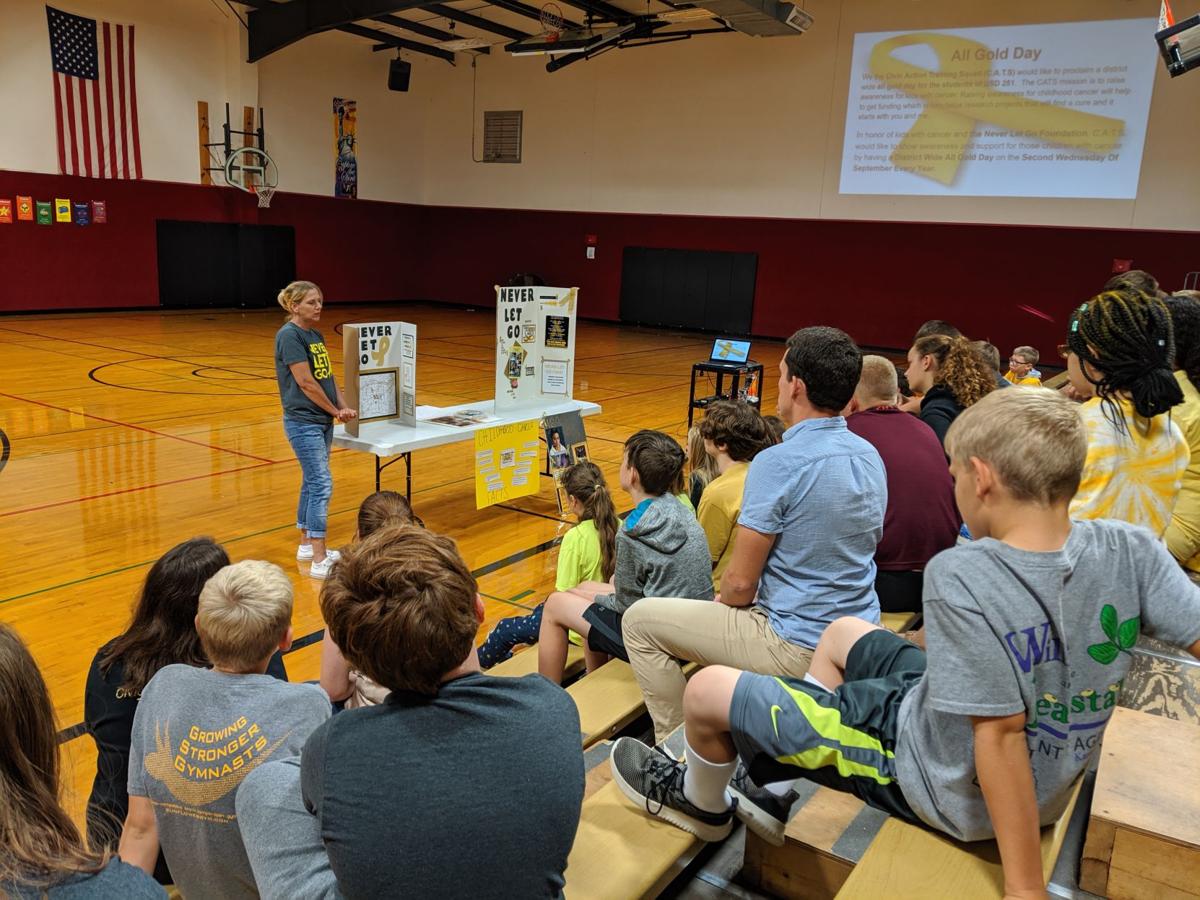 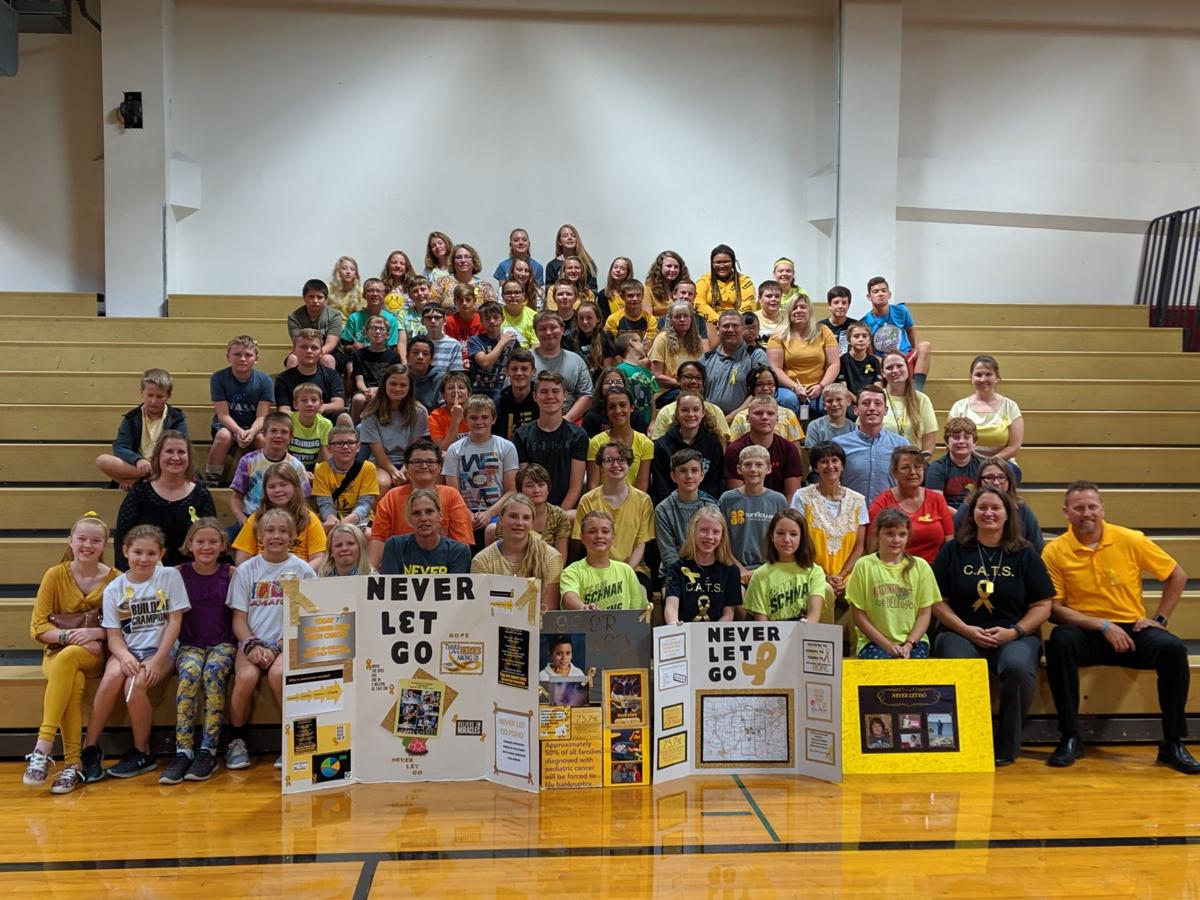 The purpose of the day was to raise awareness and financial support for area families affected by childhood cancer. During a morning assembly, middle school students from NLC’s Civic Action Training Squad (CATS) class presented their fundraising ideas to fellow classmates, some of which included organizing a bake sale, a school-wide penny war and a 50-50 raffle during an upcoming Northern Heights High School football game.

“All of the other students have really stepped in to help,” said CATS eighth-grader Sadie Bathurst. “We just wanted to raise money for childhood cancer. Last year, it was a lot of fun to see everybody wear yellow and we decided we wanted that same kind of energy in our school again. So, we passed a proclamation [for Gold Day] and we get to do it again this year. We want to take it at least county-wide, but our far-off goal is to take it state-wide.”

Last year’s CATS group raised more than $940 to be put toward Sandy Knight’s Never Let Go Fund. The fund — which has now taken in more $100,000 in total — was founded with the help of the Emporia Community Foundation in 2014 to honor Knight’s late teenage son, Adrian Lewis-Solano, who died from complications due to cancer in 2011. Currently, Never Let Go provides up to $4,000 per year to area families battling various childhood cancers.

“At home, I’ve really been thinking about this, and I’ve also been working at the school on things to help,” said CATS 7th-grader Joshua Wiredaugh. “At home, I’ve been trying to figure out how to earn money to be able to donate to the Never Let Go penny war. Right now, I’ve earned $40 and I plan to send $20 of it.”

“If I could let anyone know the major thing about this class is that we’re just trying to raise awareness,” added CATS eighth-grader Austin Woodrow. “We just want to get the word out to people that [childhood cancer] is a big deal, not a small deal, and that we’re raising money to help the families.”

For North Lyon County Social Studies Teacher and CATS supervisor Elly Dice, the process of seeing her students come together to work toward a common goal has been both encouraging and rewarding. Knight said she felt the same way, congratulating the NLC student body for being more active in the cause than most adults.

“I’m super proud of all our students,” Dice said. “Obviously, we see a lot of the work from sixth-to-eighth-graders in the CATS elective class, but if you visit with the K-5 students, they would tell you just how active they’ve been, too. We have a third-grader that’s been out to cookouts working crowds and sharing information. Alone, he has raised $200.

“We’re also going until the end of the with our penny war. To give you an idea of how well that’s going, last year our CATS students were able to count the money themselves in class every week and give an update. There’s no way we could do that this year. The first week that we went down and collected the money, it was like, ‘Where are we going to put all this, how are we going to count all of this?’ Thankfully, our local bank here in Americus has agreed to help us out with that.”

“These guys are the only big group around here that has a day dedicated to wearing gold to raise awareness and they’re the youngest that I work with,” Knight added. “Being able to raise money for these families that are affected by childhood cancer means so much to them and to me. It’s truly overwhelming to see. What these kids are doing is really special.”

For more information on the Never Let Go Fund, visit www.facebook.com/alforever13 or www.emporiacf.org.

"It’s truly overwhelming to see. What these kids are doing is really special.”

We have a little girl who was born with a brain tumor. Her family has exhausted all of the insurance policies they had including title 19. I cannot believe the medical companies are garnishing their pay check! This family in Madison, KS are in need of help to feed their children and pay their bills. Please consider this family. If you need more information to help them please contact Pastor Bob Robinson at (620) 437-6699. Thank You!