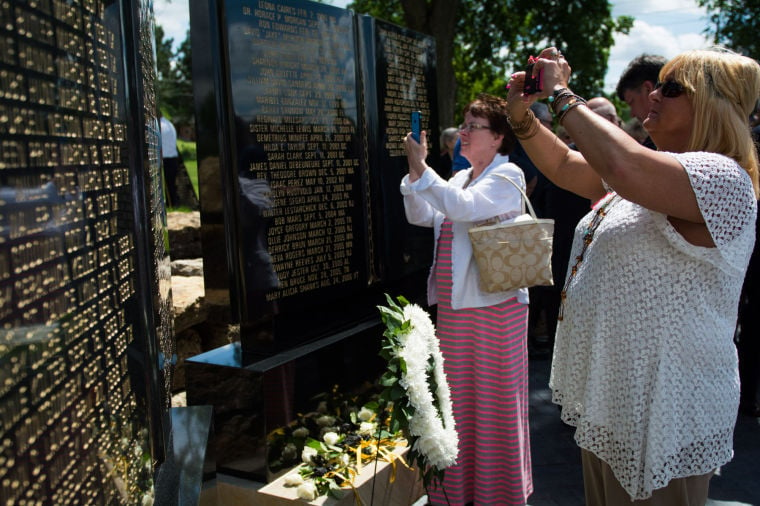 People take photos of the names on the newly revealed Fallen Teachers Memorial after its dedication ceremony in Emporia, Kansas on June 12, 2014. 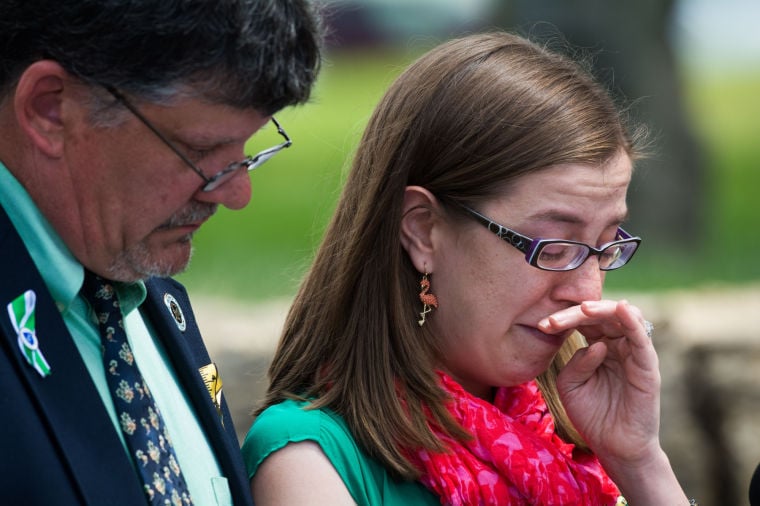 Newtown, Connecticut teacher, Liesl Fressola, left, tears up as she reads the names of teachers killed in the Sandy Hook Elementary School shooting as she is accompanied by Tom Kuroski, Newtown Federation of Teachers union president, during the Fallen Teachers Memorial dedication service in Emporia, Kansas on June 12, 2014. 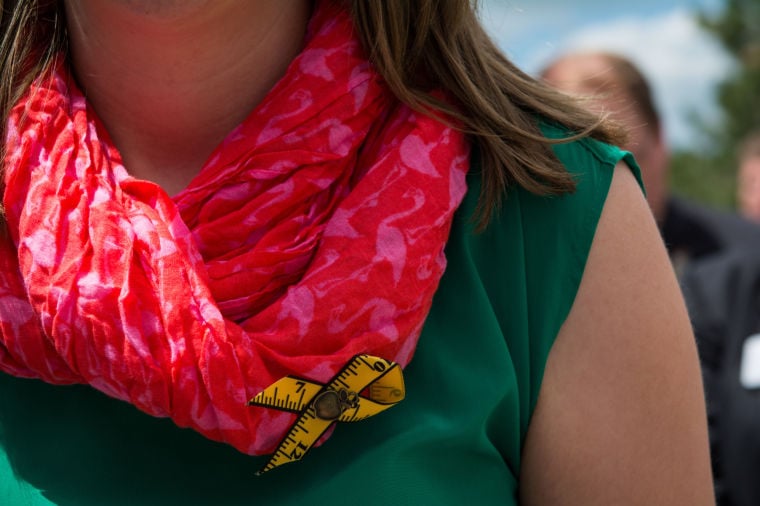 Newtown, Connecticut teacher, Liesl Fressola, wears a ribbon to honor the lives of teachers lost in the line of duty during the Fallen Teachers Memorial dedication ceremony in Emporia, Kansas on June 12, 2014. Fressola is a teacher at Sandy Hook Elementary School, where a gunman fatally shot 20 children and six adult staff members on December 14, 2012. 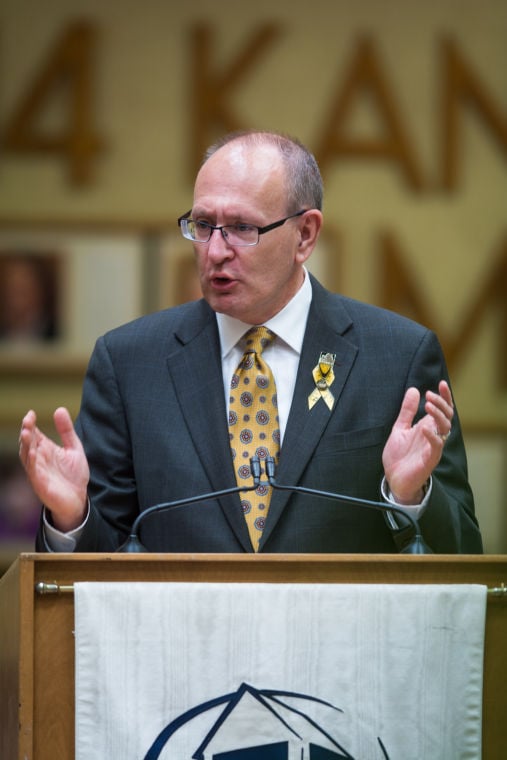 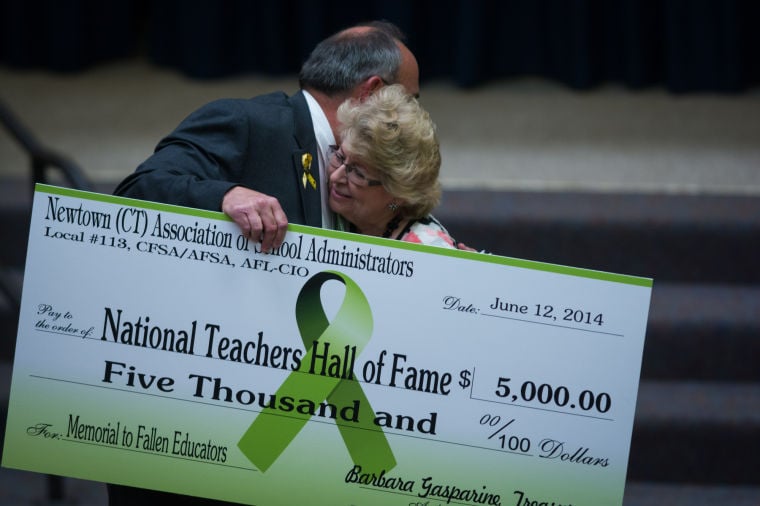 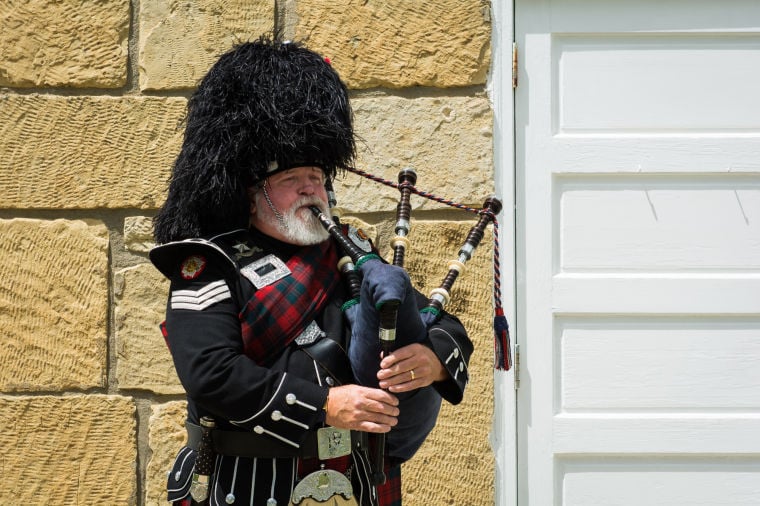 People take photos of the names on the newly revealed Fallen Teachers Memorial after its dedication ceremony in Emporia, Kansas on June 12, 2014.

Newtown, Connecticut teacher, Liesl Fressola, left, tears up as she reads the names of teachers killed in the Sandy Hook Elementary School shooting as she is accompanied by Tom Kuroski, Newtown Federation of Teachers union president, during the Fallen Teachers Memorial dedication service in Emporia, Kansas on June 12, 2014.

Newtown, Connecticut teacher, Liesl Fressola, wears a ribbon to honor the lives of teachers lost in the line of duty during the Fallen Teachers Memorial dedication ceremony in Emporia, Kansas on June 12, 2014. Fressola is a teacher at Sandy Hook Elementary School, where a gunman fatally shot 20 children and six adult staff members on December 14, 2012.

Bag pipes played solemnly in the distance as family, friends, colleagues and community members approached the Memorial to Fallen Educators on Thursday afternoon. The memorial, located on the Emporia State University campus was dedicated in a special ceremony to honor the 113 educators who have died doing the work they loved — educating America's young people.

When six educators and 20 school children were killed in a shooting at Sandy Hook Elementary School in Newtown, Connecticut, Carol Strickland, director of the National Teacher's Hall of Fame, was motivated to create a memorial to all educators that have lost their lives in "the line of duty." When she began researching the number of educators who have lost their lives she was shocked to find that 113 educators had made the ultimate sacrifice.

“They gave their lives for education, said Strickland. “Those in Sandy Hook in particular, they found some of the teachers with their bodies over the children trying to protect them. Those teachers literally threw their lives down.”

Strickland began the process of fundraising and through generous contributions from a variety of donors, the Memorial to Fallen Educators grew into a memorial plaza. The NTHF is committed to maintaining the memorial as an on-going tribute to the educators that have given so much.

"We promise to maintain the memorial," said Strickland. "To add improvements to make this an enduring tribute to these very special people and to preserve our fallen educators legacies on our website with pictures and life stories. Hopefully we will never have to add anymore names in the future. This should be a solemn reminder today that school tragedies should never happen."

The dedication ceremony was a solemn tribute to the 113 educators who made the ultimate sacrifice. Anthony Salvatore of the Newtown Connecticut Administrators Union and Thomas Kuroski with the American Federation of Teachers also from Newtown Connecticut spoke at the dedication ceremony. Both expressed that taking part in the memorial dedication was a part of their journey to healing as well as a fitting tribute to the lives of their friends and collegues.

"Before Dec. 14, 2012, I never thought I would be standing here listening to Liesel read the names of six of our colleagues and friends," said Kuroski. "Yet after all this happened, after all that we have been through, it is comforting to know that there is a place that they are, with 105 other educators who died in the line of duty, and will forever be known not for the horrendous circumstances surrounding their deaths but for the passionate and heartfelt work of their lives. Educating, nurturing and supporting our nations future."

Salvatore spoke of his colleagues and the passion they had for teaching and the students they worked with each day.

"I would say that what you see is what you get," said Salvatore. "That is absolutely how they lived their lives every day. They gave 120 percent to their kids. They would do anything at anytime. I was amazed at the dedication and real love that they had for their kids and those are their kids. It wasn't a job, they were protecting their family members. Even in the end, there was an educator found with a child in her arms and that is what she did every day, even before then."

At the memorial, the names of all 113 educators were read aloud by Kuroski, Liesl Fressola, Sandy Hook Elementary Teacher, and the members of the NTHF Class of 2014. Fressola was overcome with emotion as she read the names of her friends Rachel D'Avino, Dawn Hochsprung, Anne Marie Murphy, Lauren Rousseau, Mary Sherlach and Victoria Soto. Soto was Fressola's best friend.

Fressola released the following in a written statement:

"I am honored to be here today representing the staff at Sandy Hook School in Newtown, Connecticut," Fressola said. "I felt compelled to attend this dedication because one of the teachers being honored today, Vicki Soto, was my best friend at Sandy Hook. I would much rather be here tomorrow to induct her and my other colleagues into the National Teachers Hall of Fame. But that will never happen. Having the Memorial to Fallen Educators stand alongside the National Teachers Hall of Fame is a beautiful way to honor the memory of those who gave their lives doing what they love."

James McGee was a junior high school principal in Goddard, Kansas, when he was killed by a student on Jan. 21, 1985. McGee's wife Crystal was pregnant their fourth child at the time. McGee's widow, two of his siblings and two of his children attended the dedication ceremony. The family expressed how important it is to know that their loved one is not forgotten.

"I think that is one of the hard things about loss," said Crystal McGee. "You lose somebody you love and you see the world going on. So it is important to families to know that the world did stop for a moment to remember him."

Those in attendance expressed their desire for an end to school violence but also recognized the reality of the world we live in. Kuroski pointed out that there have been more than 70 school shootings since the Sandy Hook tragedy. Keynote speaker, Ruthanne Buck, Deputy Secretary of the U.S. Department of Education expressed her appreciation for the memorial but her desire for schools to be safe havens for students and educators alike.

"I would like to thank Carol and the National Teachers Hall of Fame for recognizing these fallen heroes," said Buck. "But it is my hope that we never etch another name into the granite."

The following individuals' names are inscribed on the National Memorial to Fallen Educators: