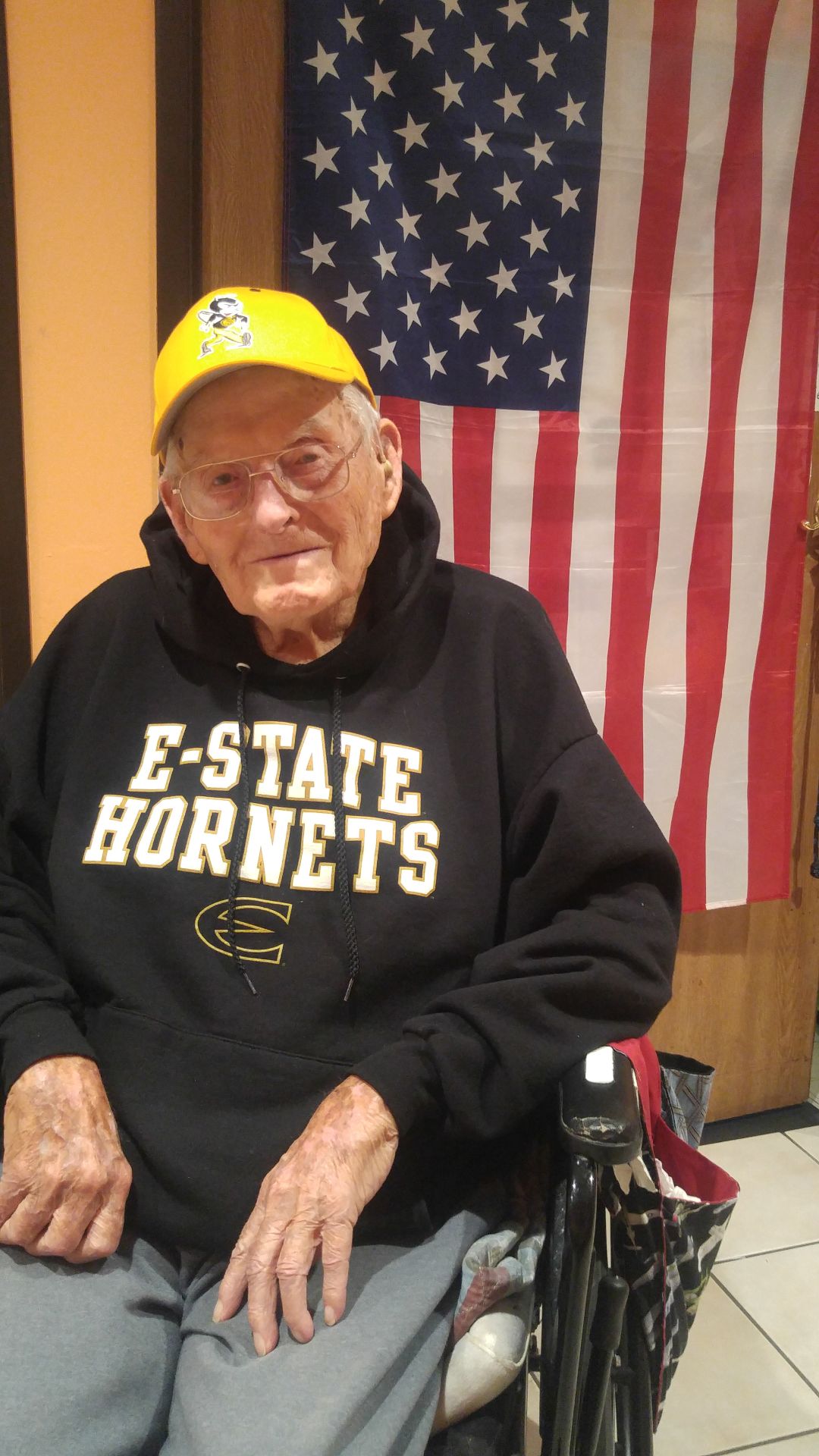 Marshall "Lynn" Jacob shows his love for his country and for Emporia State University at his home at Holiday Resort. Jacob a a World War II Veteran and will turn 100 years old on Tuesday. 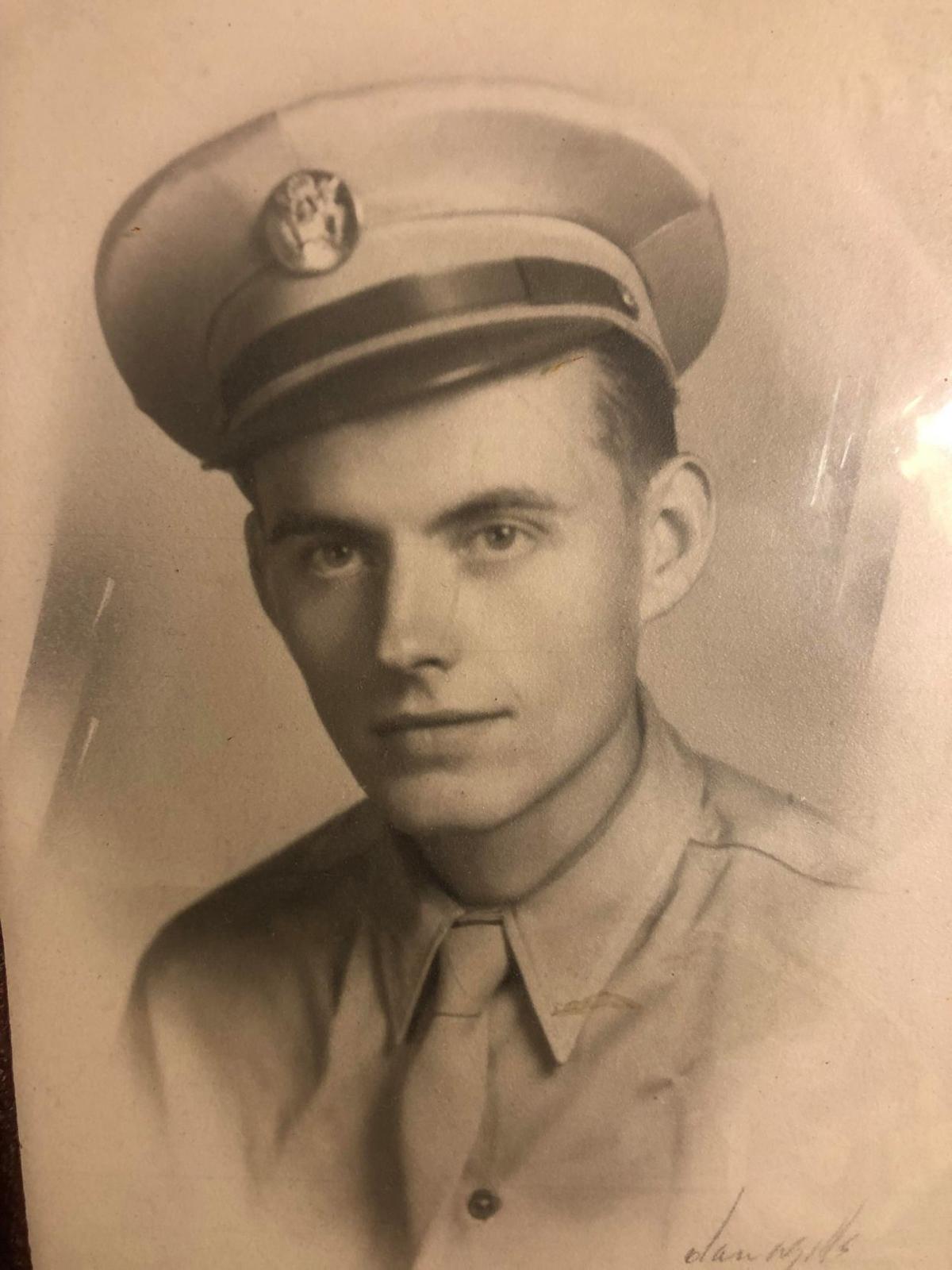 Marshall "Lynn" Jacob shows his love for his country and for Emporia State University at his home at Holiday Resort. Jacob a a World War II Veteran and will turn 100 years old on Tuesday.

Marshall “Lynn” Jacob turns 100 years old on Tuesday, carrying with him a wealth of knowledge and experiences.

He also happens to be one of the area's last surviving World War II veterans.

Jacob was born November 12, 1919, a year and a day after the end of World War I. His parents, Elmer and Lena, raised him alongside his older brother Lester and sister Dorothy on a farm a few miles outside of Neosho Rapids.

He grew up during the Depression, graduating from Neosho Rapids High School in 1937 with nine classmates. The class picture still hangs on the wall in his quarters at Holiday Resort. He points out various boys, standing tall in denim overalls, faces shining brightly in the black and white photograph.

“A bunch of us boys moved to Wichita after we graduated, to work at Boeing,” he recalls. “My brother was called up in the first draft and we heard that if you worked at Boeing, they would defer you because they needed employees building the planes.”

They heard correctly, their names were deferred as long as they were employed at Boeing. However, Jacob was laid off shortly before his birthday, at which time his name would be re-entered into the draft.

Rather than wait for the letter, he opted to enlist in the Army Air Corps.

Jacob's time in the military is rich with stories we rarely hear — those of a soldier working behind the scenes to support combat missions. In all of his three-and-a-half years serving during WWII, Jacob saw just one instance of combat. That was during his last war-time deployment, which was itself a rerouting of his original orders.

But first, Jacob went through basic training, then trained as an airplane mechanic before being sent to aerial gunnery school. After completing the latter, he was invited to teach ballistics for the Army Air Corps, but declined.

“Teaching ballistics is as dull as watching the grass grow,” he said.

Instead, he was stationed in El Paso, Texas, as a crew chief for B-24 bombers. He enjoyed flying — originally he wanted to be a pilot, but his eyesight was too poor after working on planes at Boeing — and spent a fair amount of time in the air. Those experiences have stayed with him for more than 70 years.

On another flight, Jacob recalls standing behind the pilot and co-pilot, who were both strapped into their seats, when suddenly he had an out of this world experience.

“We got caught in a downdraft and the plane dropped faster than gravity could compensate, so suddenly I'm floating up by the ceiling,” he said. “It felt like I was up there for 10 or 15 minutes but it was probably about 30 seconds. I'll never forget that feeling in my stomach.”

It was after his anti-gravity flight that Jacob requested to be transferred to ground duties.

Jacob's favorite deployment was the eight months he spent on the Galapagos Islands. He served as a mechanic for the bombers protecting the Panama Canal from the Japanese. His duties were light.

“We had four engines there, ready to replace engines on the planes, but they never needed them,” he said. “I spent eight months sweeping out the hanger, playing volleyball and going to the beach. It's the prettiest place I've ever been.”

His time in the islands ended after the Battle of the Bulge. Officials decided to send more servicemen to Europe, so they transferred personnel from the Air Corps to the infantry. Jacob was not happy about the change, although he did find some enjoyment in his training.

“Man, you talk about mad,” he says. “But I did get to shoot a lot of weapons I wouldn't have otherwise. I shot bazookas and all kinds of things.”

In May 1945, Jacob was home on a 10-day leave prior to shipping out to join the fight in Europe when Germany surrendered. He was rerouted to the Philippines with the 77th Division, where the war continued in the Pacific Theater.

It was during his voyage to the Philippines that Jacob had his brush with combat.

“We were out there on the ship and all of a sudden the two destroyers escorting us started dropping depth charges,” he remembers. “There was a Japanese submarine in the area that was preparing to fire torpedoes at us. I was on deck and I remember thinking I was about to die and wondering how high I would be thrown into the air when the torpedoes hit.”

Fortunately for everyone on the ship, the destroyers provided enough defense that the attack never came. Jacob was in the Philippines when President Harry Truman ordered the dropping of nuclear bombs and Japan's subsequent surrender.

“I'll tell you what, there was a time when if anyone said anything bad about Truman, they'd get punched,” he said.

With the Axis powers defeated, Jacob was deployed with the 77th to Japan's north island, where he was part of the occupation forces for several months.

After being discharged in Jan. 1946, Jacob returned home to a new reality: his mother had diedy shortly after his last leave. He keeps her photograph in his room and speaks of her with love and some sorrow.

“She was the best woman in Neosho Rapids,” he said. “A woman came up to me at church when I got back and said that to me. And she was right.”

With his military service behind him, Jacob settled down to farm near Reading. He took some university classes, never quite got around to marrying and discovered an interest in antique tractors.

When he finally retired from farming following some health issues, he took up residence at Holiday Resort. But farming was still in his blood. Earlier this year, he asked if there was a patch of land he could use to grow tomatoes. The staff found a plot of ground and he set to work. His harvest was bountiful — he gave away more than 200 tomatoes to his fellow residents.

“I have a secret to my success, but I'm not sure I should tell,” he chuckled. “OK, it's coffee grounds. Most people don't make enough coffee for the grounds to make a difference, but we go through so much coffee here, I had plenty for my tomatoes.”

Jacob also delivers copies of The Emporia Gazette to residents with the help of his wheelchair.

“I'm the oldest paper boy in the country,” he said gleefully.