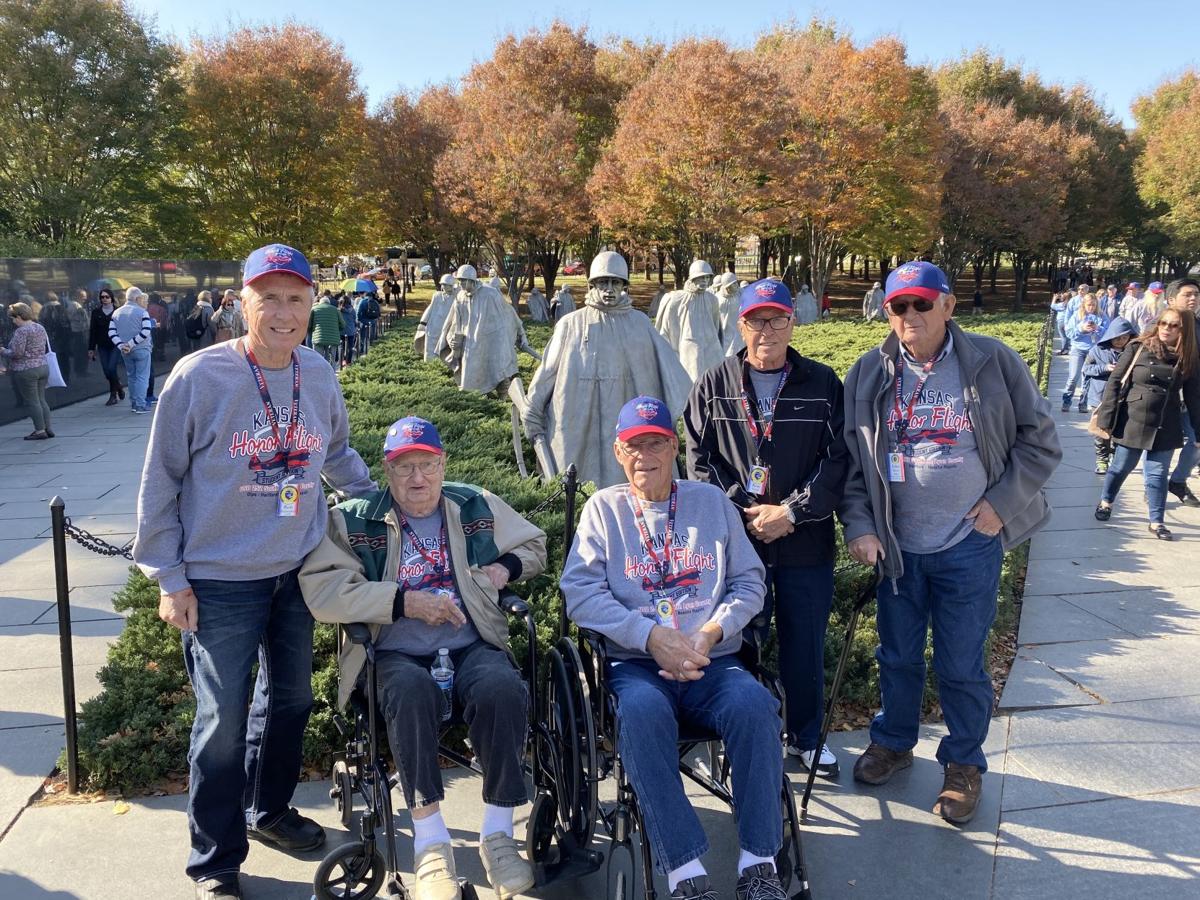 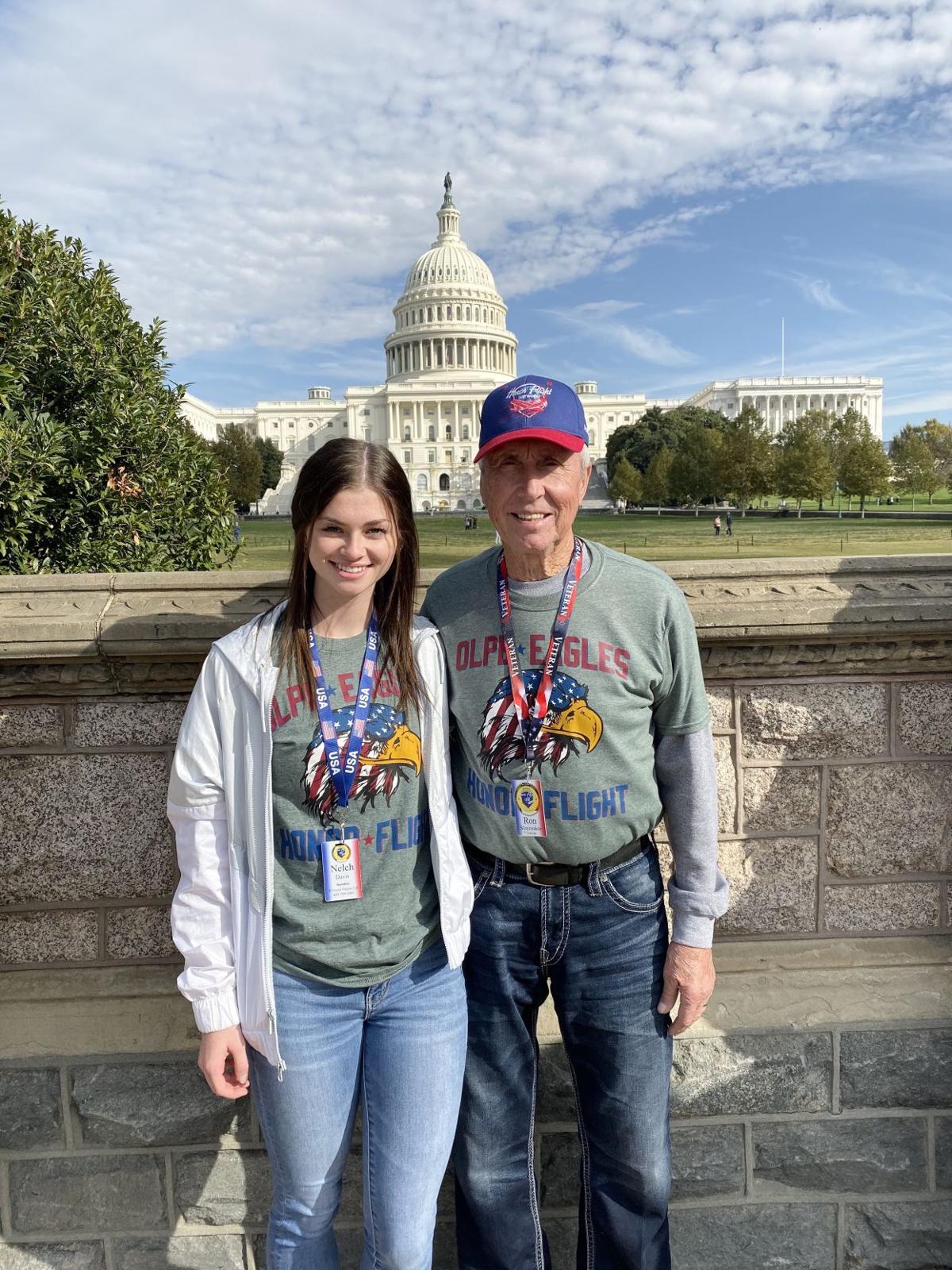 After attending the information dinner a few days prior to leaving on Honor Flight No. 7, everyone surely would know that this was a special event just waiting to happen. I think I can speak for all 23 veterans on the trip that this was a first-class event that we all appreciate very much.

Mike Argabright, the trip coordinator, has been a driving force from the beginning of this program. He would be the first to acknowledge that the 11 other individuals who are a huge part of the administrative staff are the ones who coordinate every move and continue to make the flight special.

To all of you veterans out there who have not made this trip, ask anyone who has gone and you will soon sign up. All veterans are eligible. Applications are available at Olpe, Hartford or Northern Heights high schools.

The trip started with a 2 a.m. departure from Olpe High School. A fire truck, police cars, sheriff vehicles and many private cars led the way from Olpe to Interstate 35. It was truly a celebrity ride to Kansas City International Airport.

We departed at 6:20 a.m. and arrived in Baltimore to a water gun salute as we taxied to the terminal. As we entered the terminal, we were greeted by a large group of Junior ROTC students from a local high school. They clapped, shook our hands and waved flags. Before we knew what was happening, it seemed like the entire terminal got involved. A standing ovation from hundreds of people who didn’t know who we were. It was a goosebump moment.

Our first stop of the morning was at the World War II Monument — soon to be followed by Vietnam and Korea. I’ve heard it said that if you see one monument, you have seen them all. That is far from true. Every monument we saw in two days was distinguishingably different and very surprising.

We had a special surprise that wasn’t planned but was certainly a morning highlight. A silent Marine Corp drill team performed for us and it was outstanding. Afterward, these young men mingled in the crowd to talk and answer questions. We were pumped as we made our way to Arlington National Cemetery.

The view of the cemetery was in itself a sight to remember, but the best was yet to come. We witnessed the Changing of the Guard at the Tomb of the Unknown Soldier, which is a 24/7 ritual. We witnessed two families laying a wreath at the tomb, and then four of our group laid a wreath in honor of Lyon County service men and women who have lost their lives in action.

The Navy, Air Force and Iwo Jima Memorials were next in line. They were equally as impressive as all the others we had seen today.

Now the bad part, Washington, D.C. traffic. It took us about an hour to get to the All-American Buffet. The wait was well worth it.

On to our hotel, which was just as everything else has been and that was first-class. We were entertained by a group called Now and Then. Four senior ladies who had formed a barbershop quartet. They were good.

Our first stop of the second day was at the White House and Lafayette Square. The White House is getting a new fence, so we could not get very close. The Jefferson Memorial is not far off and it is very impressive. We also had a distant view of the capital and the flag was up on the Senate side, which meant they were in session.

We were admitted to the Holocaust Memorial Museum early, which was good because you could spend all day there if your emotions would allow. You start on the 4th floor and work your way down. At the bottom, you can follow a very interesting story of Daniel. You follow his life as a young boy through his diary. It started in the middle 30s and ended in 1945. A story filled with happiness and hope but also many years of tragedy and death.

In the end, liberation.

Another unscheduled stop was at Ft. Meyers. We visited the horses that are housed there which are used in the many funerals at Arlington National Cemetery. There are normally eight funerals a day. This was especially a good stop for Darrell Schmidt, who was stationed at Ft. Meyers and part of the caisson unit.

Our time is running short and we make a quick stop at two really great memorials, Franklin Roosevelt and Martin Luther King, Jr. were both good ones to end our stay in Washington, D.C.

On our trip home, we all had time to reflect on two inspiring days. We were treated so special and really appreciate the outstanding organization of the trip and the special people who pulled this off without a hitch.

Lastly, we couldn’t have made it without our student guardians. These students from Olpe, Hartford and Northern Heights high schools were so responsible and respectful. These young men and women will always be in our hearts.

Would you believe, as we enter Kansas City International Airport terminal, there was the Patriot Guard to welcome us home. What an appropriate ending to two very special days.