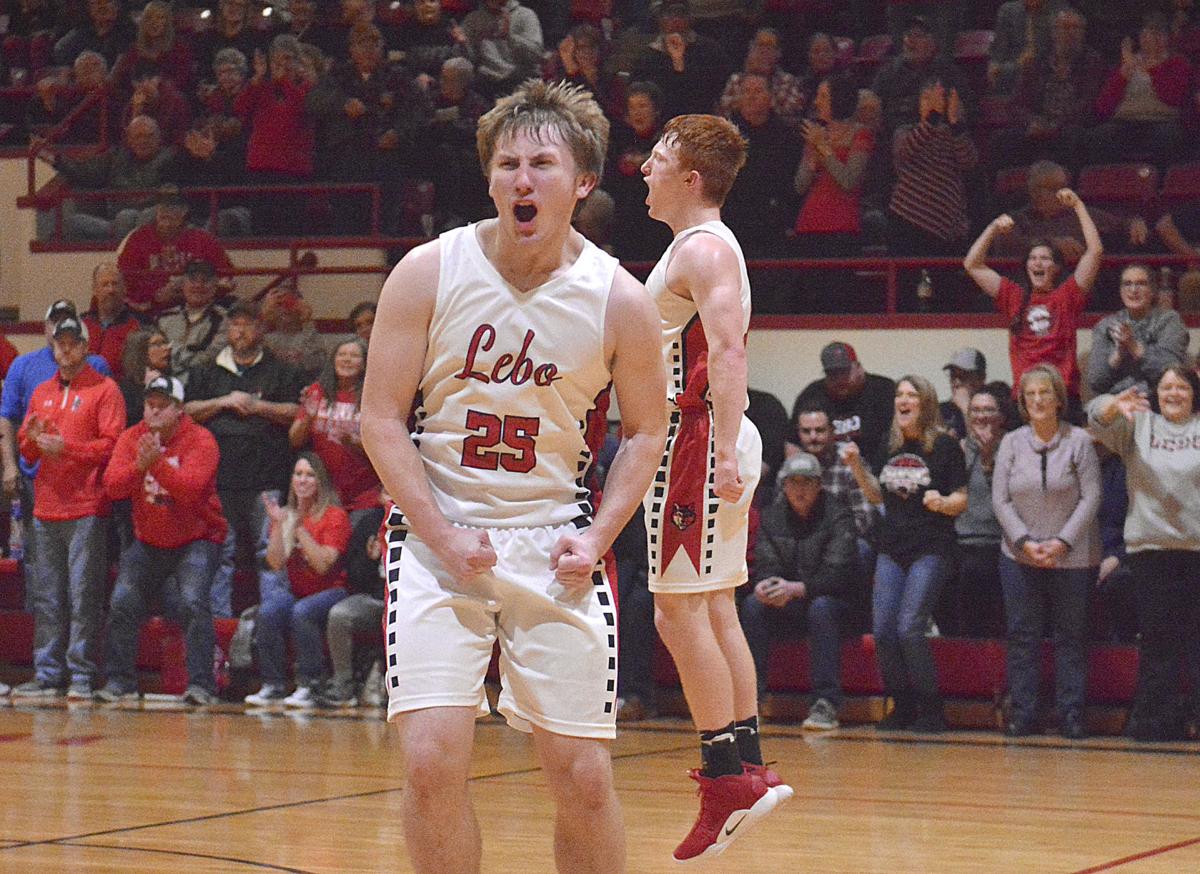 Lebo’s Andrew Bailey (25) and Kyle Reese react to the final horn of their game with Olpe on Thursday night. Lebo secured the second seed in next week’s Lyon County League Tournament after defeating the Eagles by a 41-34 margin. 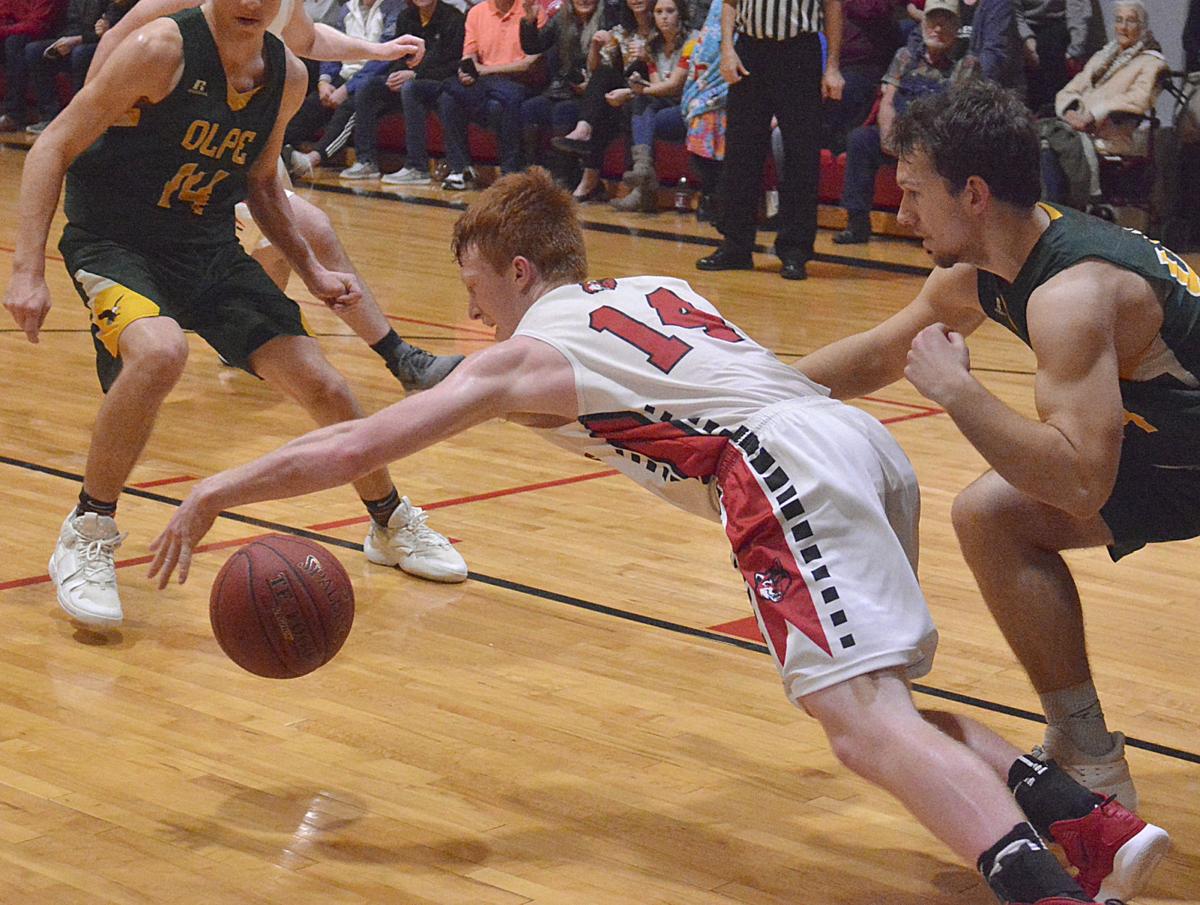 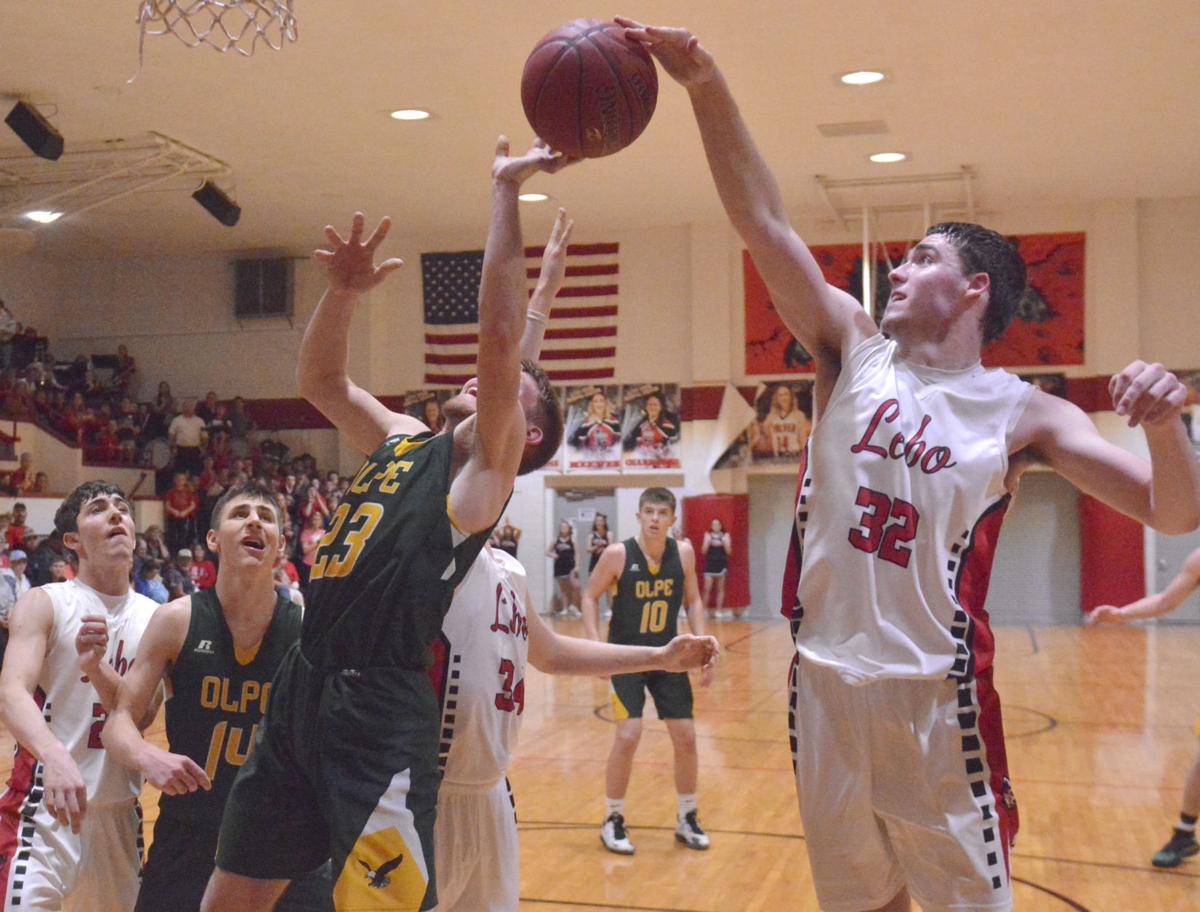 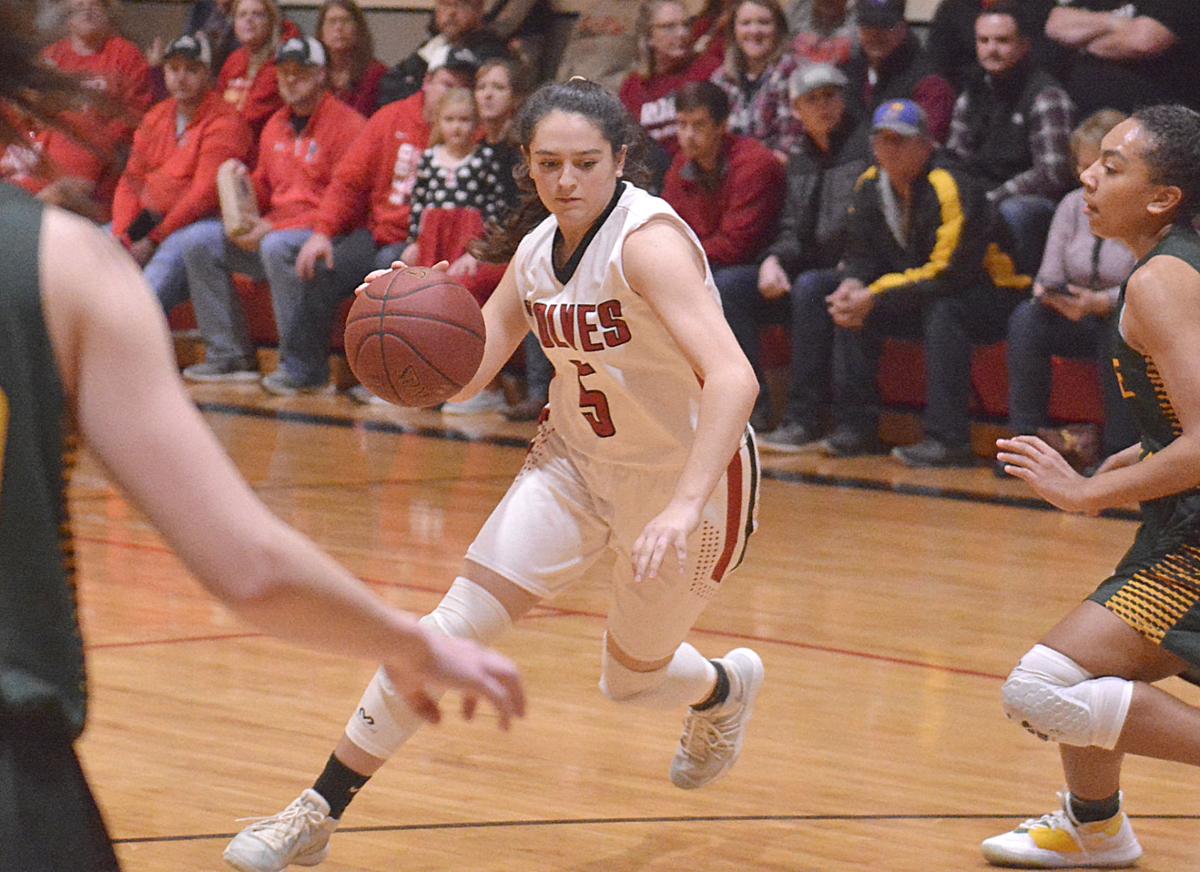 Lebo's Bekah Charboneau (5) cuts back toward the basket during Thursday's game with Olpe. 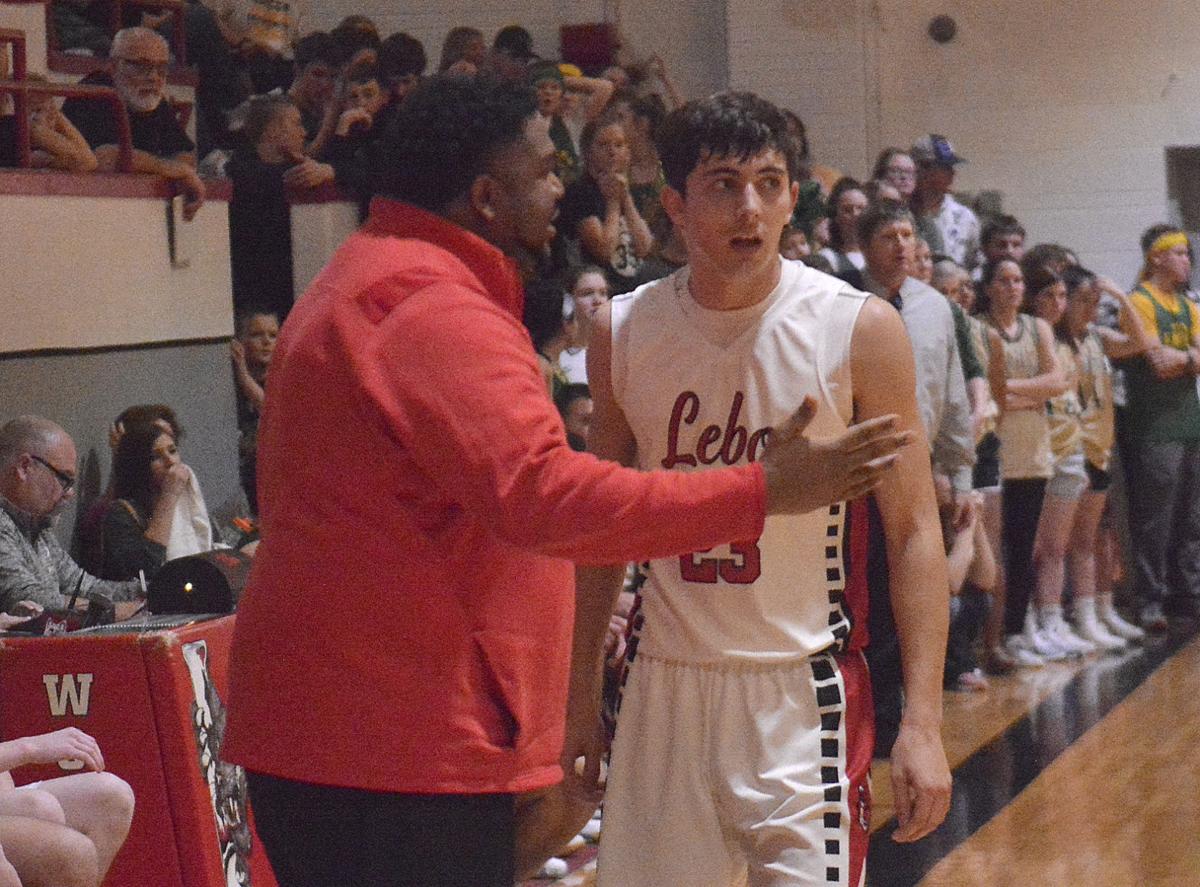 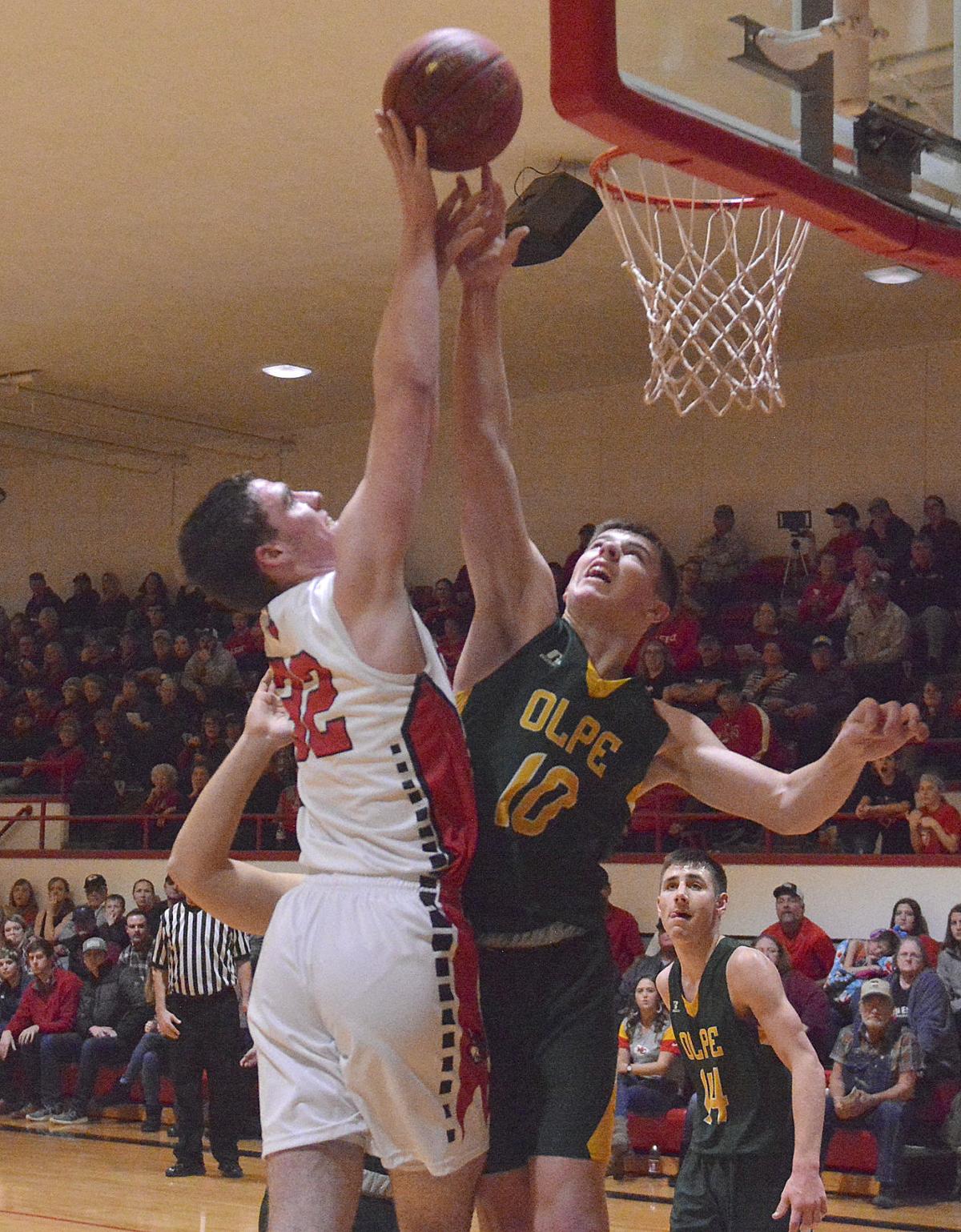 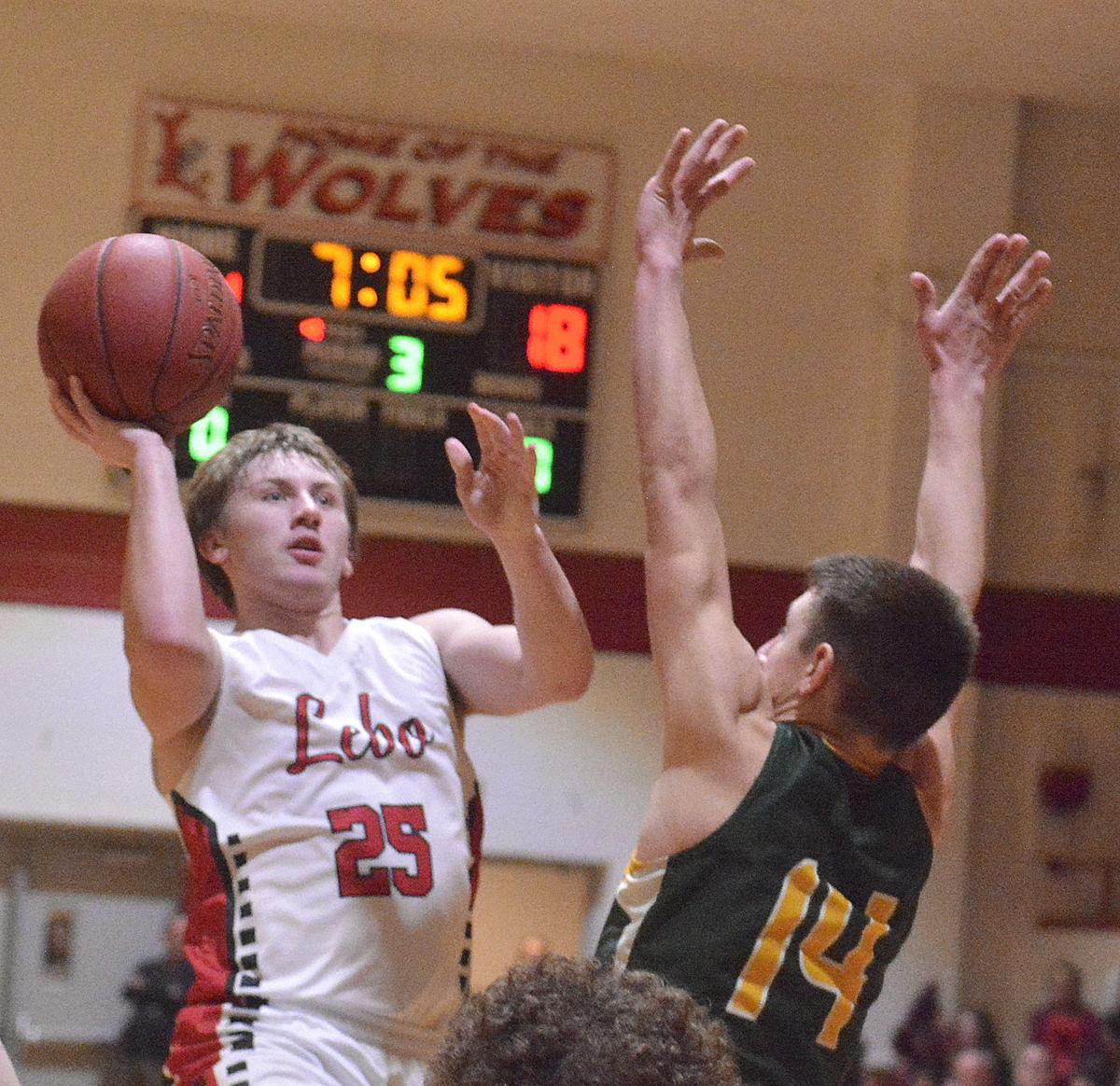 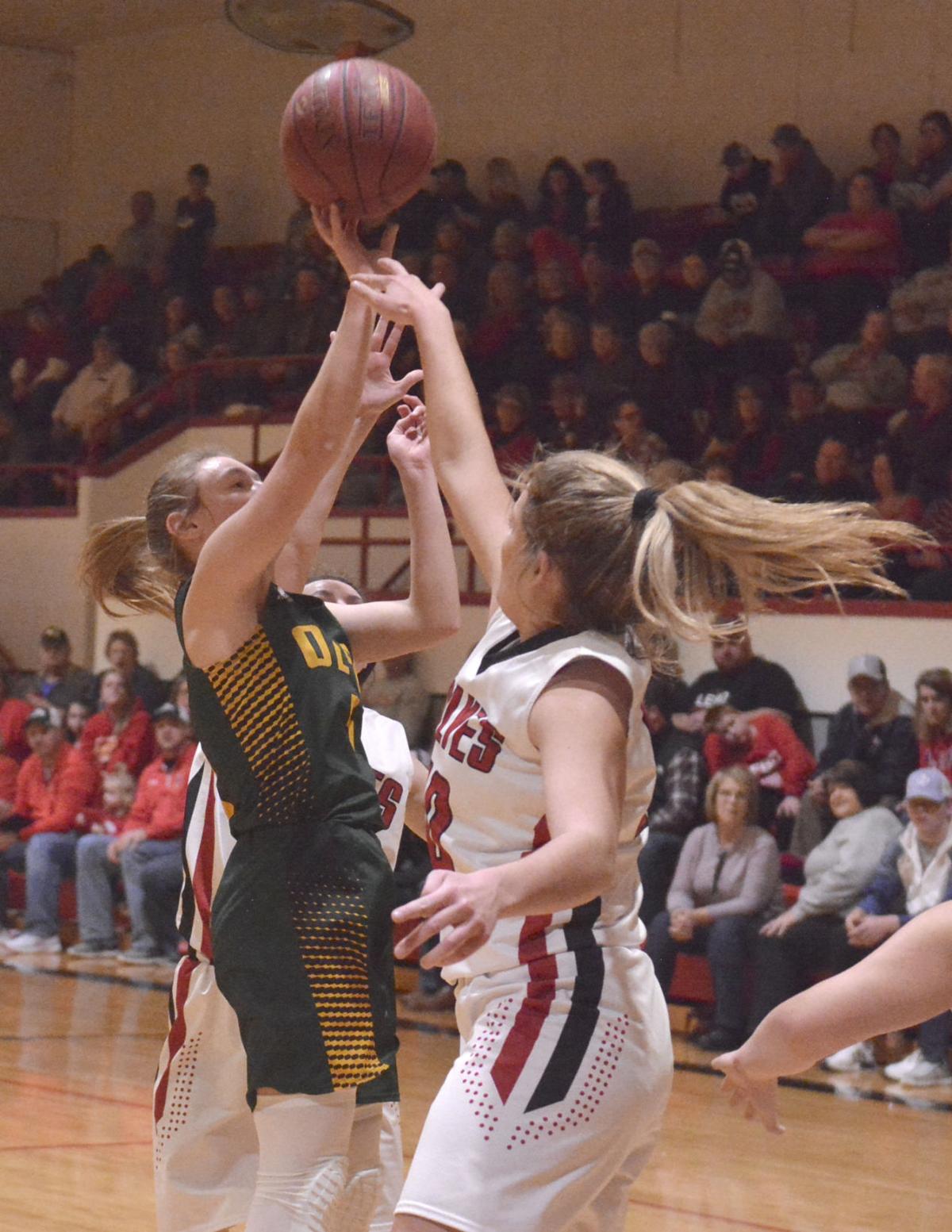 Olpe’s Macy Smith puts up a shot over Lebo’s Demi Schrader on Thursday. Smith scored 10 points in the first quarter and 17 overall while aiding the Eagles to a 67-26 win. 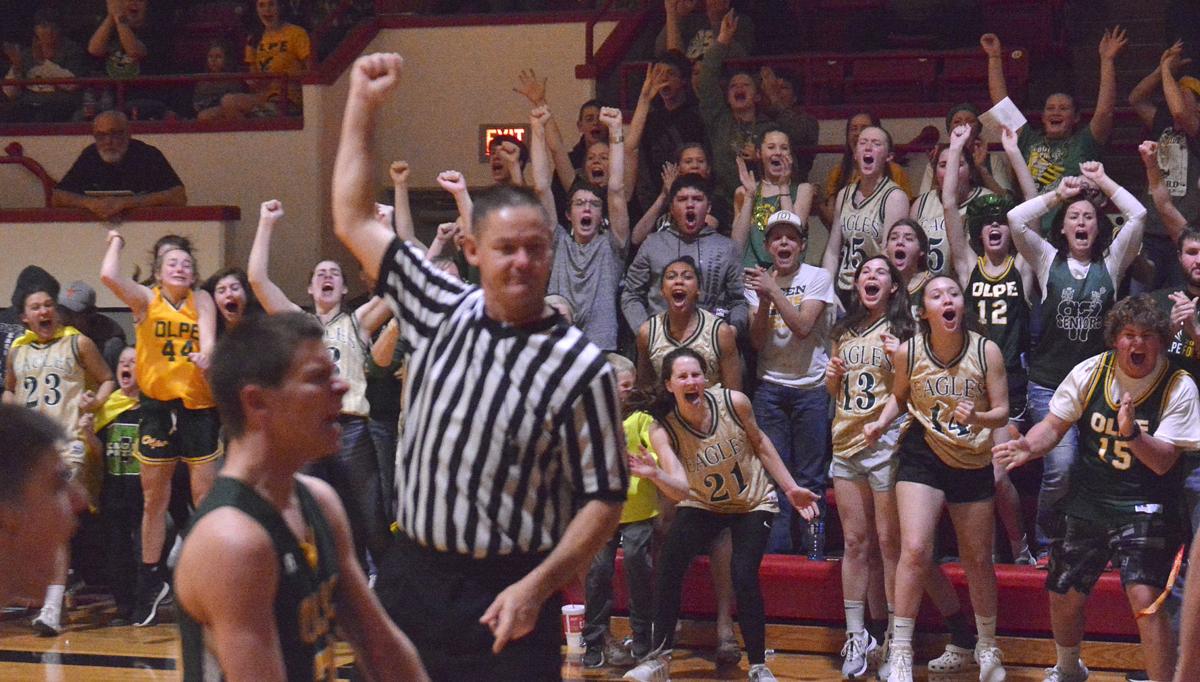 The Olpe student section reacts to a three-point play chance in the second half of the Eagles' game in Lebo on Thursday night. 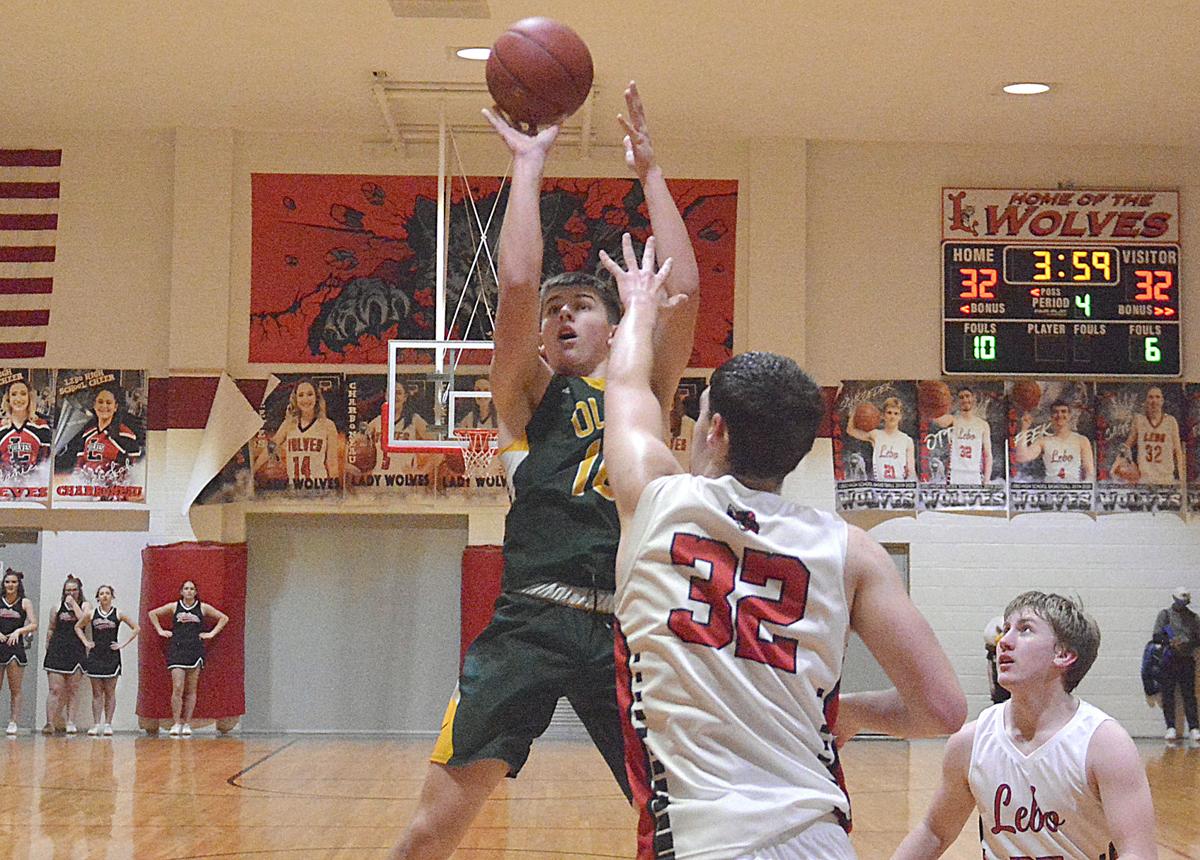 Jordan Barnard (10) scored a team-high 13 points for Olpe during their game against Lebo on Thursday night. 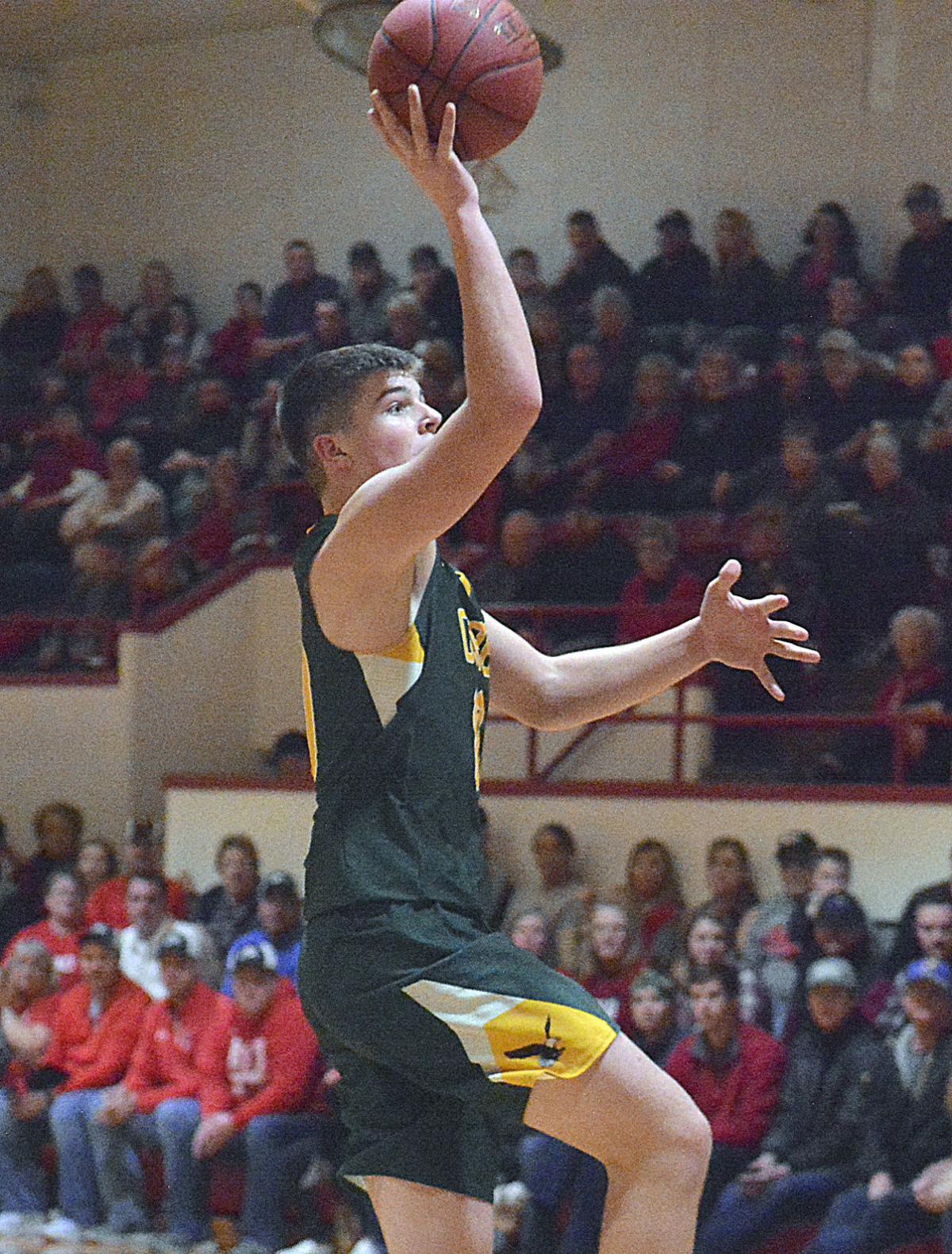 Olpe’s Jordan Barnard hoists a shot during the Eagles’ game in Lebo on Thursday night. 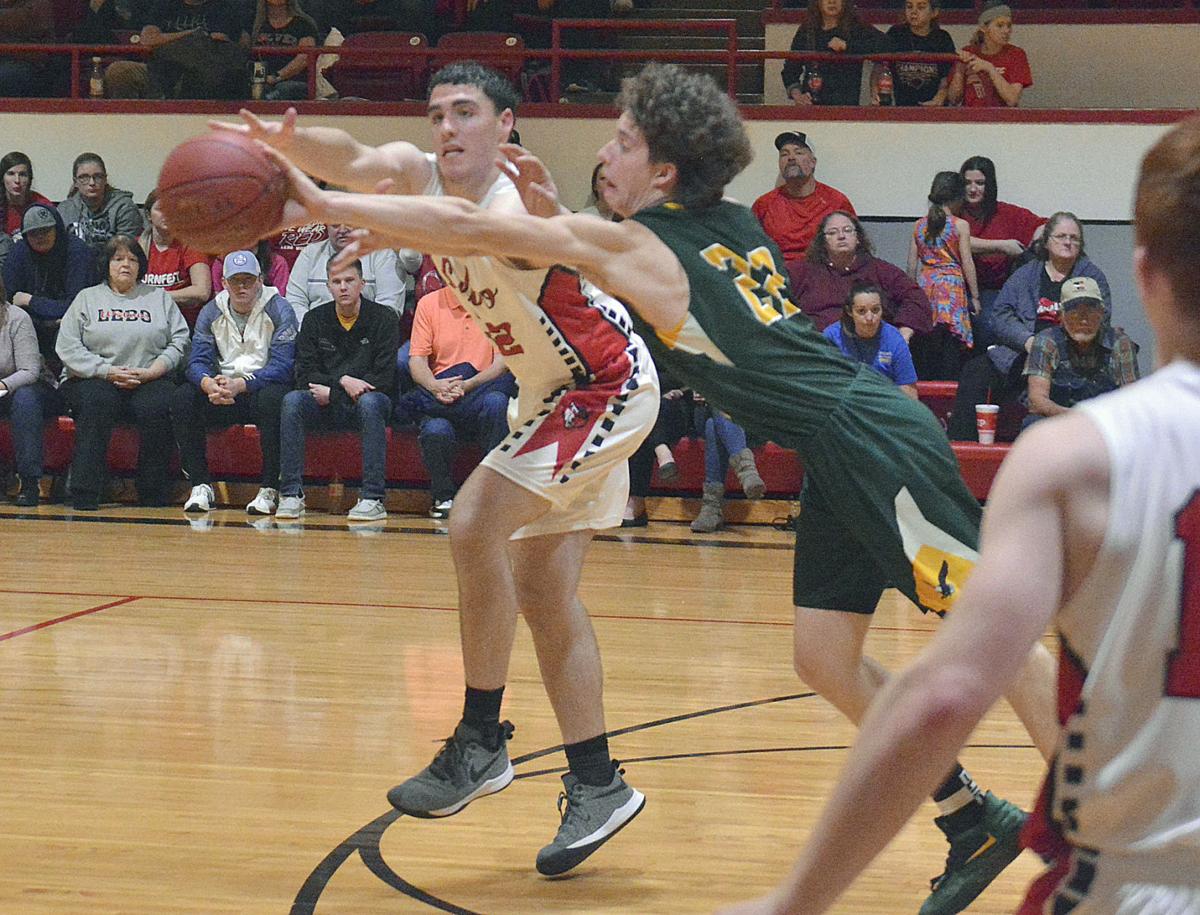 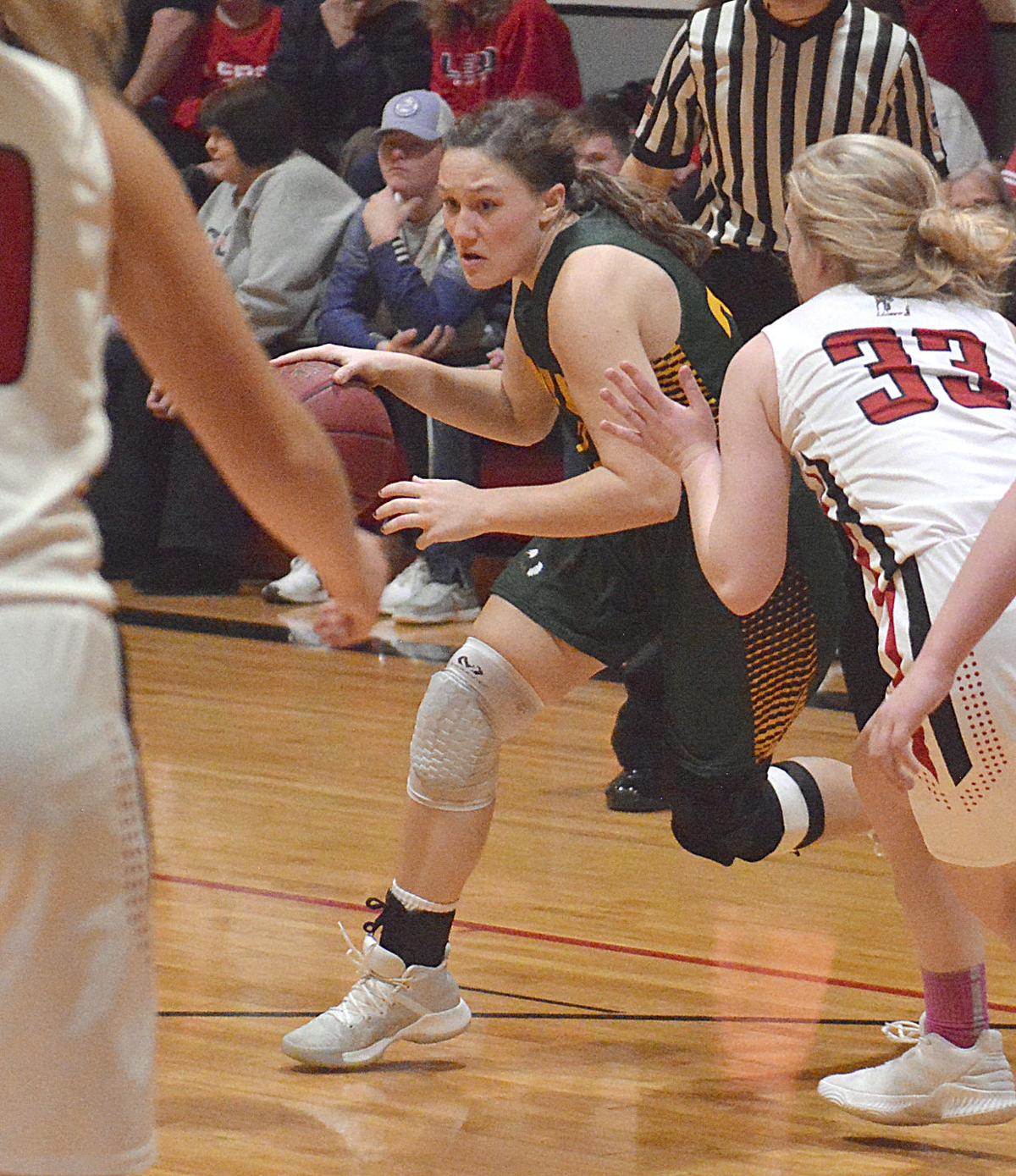 Olpe's Hattie Fisher works the ball around the Lebo defense on Thursday night.

Lebo’s Andrew Bailey (25) and Kyle Reese react to the final horn of their game with Olpe on Thursday night. Lebo secured the second seed in next week’s Lyon County League Tournament after defeating the Eagles by a 41-34 margin.

Lebo's Bekah Charboneau (5) cuts back toward the basket during Thursday's game with Olpe.

Olpe’s Macy Smith puts up a shot over Lebo’s Demi Schrader on Thursday. Smith scored 10 points in the first quarter and 17 overall while aiding the Eagles to a 67-26 win.

The Olpe student section reacts to a three-point play chance in the second half of the Eagles' game in Lebo on Thursday night.

Jordan Barnard (10) scored a team-high 13 points for Olpe during their game against Lebo on Thursday night.

Olpe’s Jordan Barnard hoists a shot during the Eagles’ game in Lebo on Thursday night.

Olpe's Hattie Fisher works the ball around the Lebo defense on Thursday night.

LEBO — After dropping a tightly contested battle for the top seed in next week’s Lyon County League Tournament on Tuesday, the Lebo Wolves weren’t about to allow such a thing twice in a week.

Lebo survived another drama-filled second half in their home gymnasium on Thursday, holding on for a 42-34 victory over Olpe in a game that mostly remained a one-possession spread going into the final 20 seconds.

“After taking a big loss against Madison, we just needed to bounce back ... get our groove back and not lose at home,” sophomore Kyle Reese said. “We were calm this time. We kept our cool, kept our composure and we just did what needed to be done.”

The game saw six lead changes and six ties, with the margin never greater than five in either direction until the final 10 seconds.

It was still a one-possession game, Lebo clinging to a 37-34 advantage with 17.9 seconds on the clock, when Kaden Ott stepped to the free throw line to possibly help ice the game.

Both shots rimmed away. The second, however, caromed off of the hands of the Olpe rebounder and into the possession of Reese, who maintained Lebo’s ownership of the ball. The Wolves then made four of their next six free throws to finish the contest.

“I knew (Olpe’s Chris Olsson) was going to jump hard middle,” Reese said. “I faked middle, spun back and I was hoping the ball was coming my way.”

It was likely the Wolves’ biggest rebound of the season to date.

“That was huge,” Lebo Head Coach Dwayne Paul said of the play. “I love him to death. He drives me crazy, but I love him to death. I told him everyone’s going to remember that because it was the last thing that happened but no one will remember the amazing defense (he) played the other 3/4 of the game. He had some huge rebounds, took some charges, did some really good things that helped seal the victory for us.”

The game served as a defensive chess match much of the night, with the Eagles defending on the game’s first possession, for more than a minute of clock, before forcing a turnover by Lebo.

By the end of the night, however, it was the Wolves who had more defensive stops.

“It seems like the first one to get to 40 wins,” Paul said of the matchups between the two. “It’s the first time we’ve got to 40 (points) in three games now (I’ve coached) against Olpe. Normally it’s one of those 27-31 kind of games. It doesn’t surprise me. If we’re lucky enough to get there again next week, I’ll probably say it’ll be very similar.”

Olpe held a three-point lead at the end of the first and kept Lebo at bay throughout the second and into the third. As quickly as the Wolves took the lead, 22-20, Olpe followed with a 7-0 run into the fourth to press its advantage to 27-22.

Lebo came back with its own 7-0 stretch and with the game tied at 32 into the final four-plus minutes, things slowed and grew more deliberate with each turn up the court.

“Everytime you play a game in (league) play, it’s important,” Paul said. “Everyone tries to put more emphasis on Olpe or Madison, but they only do that because (those programs have) been so great for so long. That’s hats off to those guys. They’re tough. Everyone is really good on (Olpe).”

Jordan Barnard had 13 to lead Olpe, while Devan McEwen and Landon Grimmett each had nine for Lebo. Grimmett had a trio of 3-point makes while McEwen, who is Lebo’s leading scorer on the season, got all nine in the fourth quarter, including the final game-tying blow.

“He’s going to have to understand there’s going to be sometimes you’ve got to do some other things beside score,” Paul said of McEwen. “He had some mistakes early in the game and I really got on him for trying to gamble and get a steal, but he was just trying to make something happen. I understand that, being (that he’s) a 16-year-old kid, but a lot of times, you’ve got to let it come to you. He settled down in the second half, made the right reads, made the right plays and he (grabbed) more defensive rebounds. Everyone sees the (three-point shots), I see the big defensive rebounds, (him) moving his feet (and) contesting guys on the pull-up jumper. It was definitely really good to see that.”

Lebo will be the second-seed in next week’s LCL Tournament and will open play on Monday night at approximately 8:30.

“It’s one of the years I think anybody can go in there and get it,” Paul said of the LCL Tournament title. “White’s a very shooter-friendly gym. (If) you hit some shots, anybody can win it and do some really good things.”

It took only a few minutes in the first quarter for the Olpe girls to stretch their run of Lyon County League regular season titles.

The Eagles used a 15-0 run to take control in the opening period as they cruised to a 67-26 victory over Lebo on Thursday. The Wolves will enter next week’s LCL Tournament as the two-seed, but after answering a Macy Smith 3-pointer with a layup, the Wolves couldn’t find an adequate answer for Olpe or Smith.

“Really, everybody was contributing at that time, in one way or another,” Olpe Head Girls Coach Jesse Nelson said. “Scoring-wise, I thought Maya (Bishop) had a great game, a really good game on the boards, (Neleh) Davis was tough, Marley (Heins) was just that consistent (force that she is) all the time and Smithy was really something special ... tonight.”

Smith had a team-high 17 points on a night that all five starters for Olpe reached double-digit scoring. She scored 10 of them in the first quarter as the Eagles took the reigns of the game.

“I’m just so proud of our team and how we worked together,” Smith said. “We really came out and went after it.”

Adelyn Tackitt hit a 3-pointer in the first half to snap Olpe’s early run, part of a team-leading eight-point effort, but the Wolves struggled to shoot over or push the ball by Eagle defenders throughout the night.

“I thought our kids played really hard, played with a lot of energy, played intelligent,” Nelson said. “Our defense was really good and I think it was just a great game for us, we played with so much energy. That’s a good, well-coached team (across the court). They’ve got a lot of weapons and I thought we did a great job of just being solid on the defensive end.”

The Olpe girls are the No. 1 seed in the LCL Tournament and will face the eighth-seed on Tuesday night. Lebo is the third-seed and will next play Monday at 4 p.m.