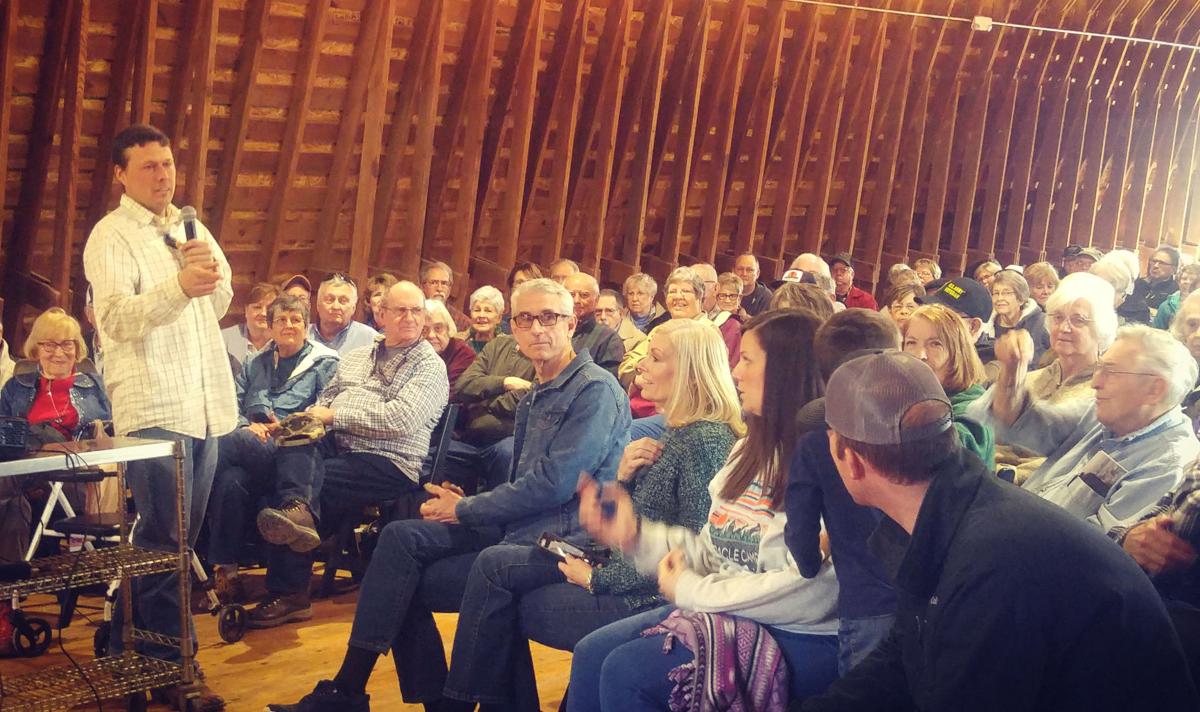 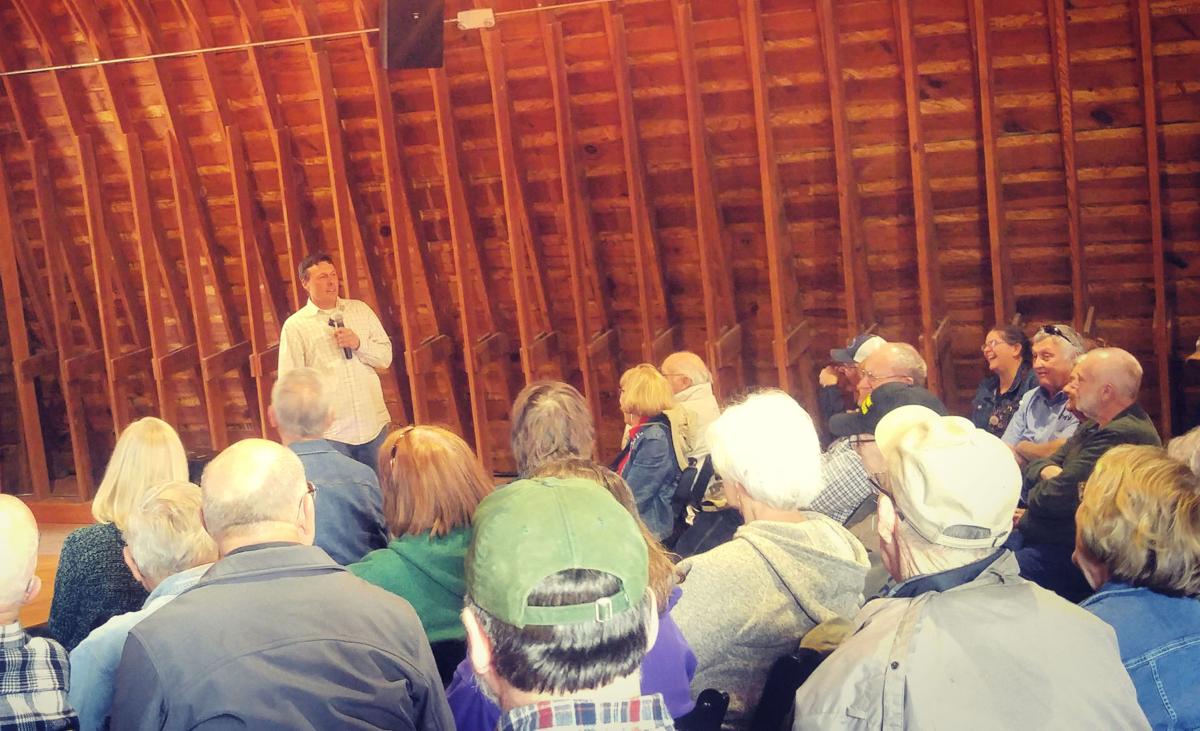 Derek Klingenberg entertains a crowd at Pioneer Bluffs in Matfield Green on Saturday. 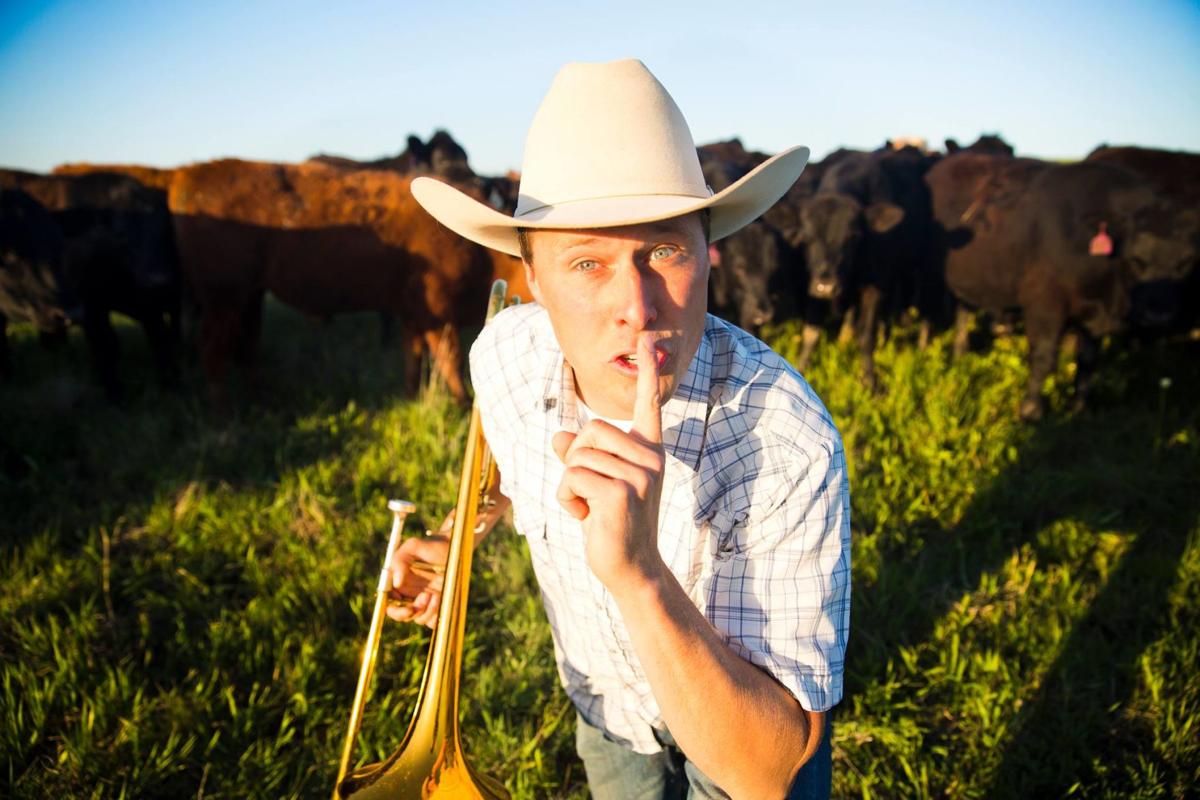 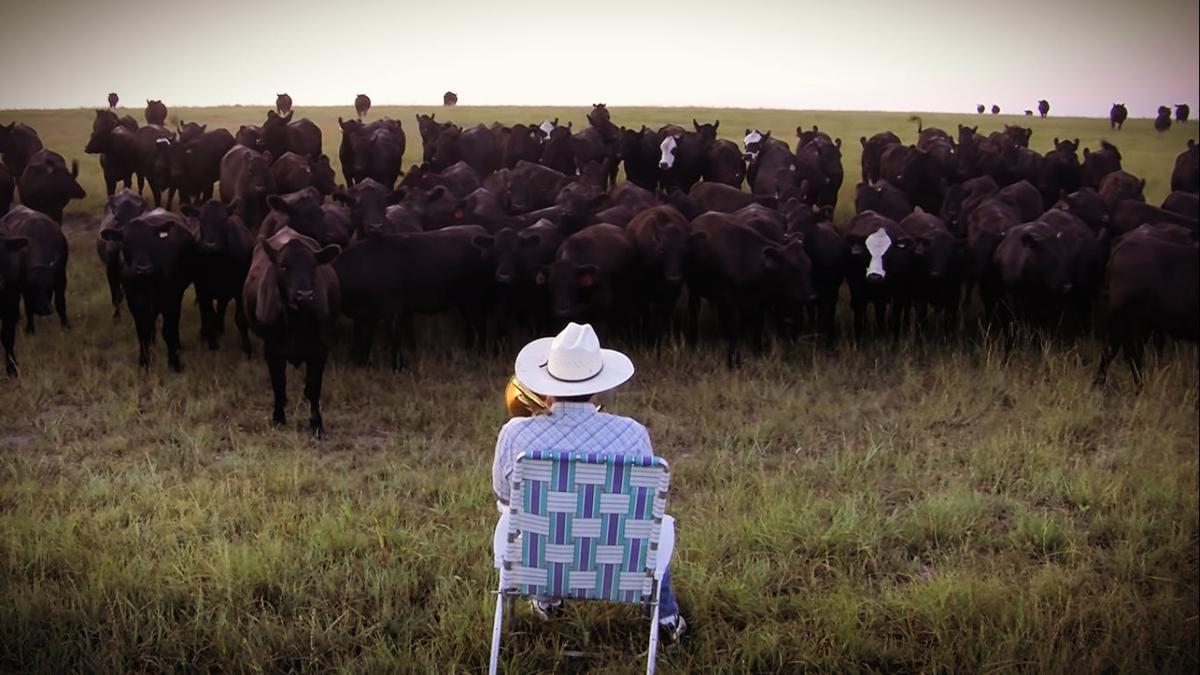 A screencap from Derek Klingenberg’s YouTube channel shows him serenading his cows with a trombone.

Derek Klingenberg entertains a crowd at Pioneer Bluffs in Matfield Green on Saturday.

A screencap from Derek Klingenberg’s YouTube channel shows him serenading his cows with a trombone.

The latest in the Prairie Talks series featured Klingenberg, a YouTube sensation with more than 50 million views from people around the world.

Known as Farmer Derek on YouTube, Klingenberg works the family farm South of Peabody along with his wife and three daughters. The farm is what you would expect from an operation in the Flint Hills — the Klingenbergs raise grain and beef. But Klingenberg’s creativity coupled with YouTube have brought this particular farmer a global fanbase.

In nearly 200 videos, Klingenberg serenades cattle with a trombone, watches a meteor shower from a hammock over a cornfield irrigation pivot and feeds cattle with robots through the internet. In a slightly serious video, the Bethel College Choir sang in his grain bin.

Klingenberg took the crowd, made up of city folks and area ranchers and farmers, through a brief history of his career as a “Prairie Parodist,” from writing songs with his brother for their now-defunct band to his first viral hit in 2015, playing Lorde’s “Royals” on the trombone to call the cattle in at the end of the day.

“I uploaded that video on a Sunday and overnight it got about 20,000 views, which was pretty good for me,” he said. “On Monday, it started getting some media attention. Then that night Ellen DeGeneres tweeted about it and I had a million views by midnight. On Thursday, it was up to 4.1 million views.”

The media coverage was intense. Klingenberg was doing interviews from early morning until midnight for news outlets from Europe and Asia to the West Coast.

“The first day, I did an interview with the New York Daily News while I was out raking hay,” he recalled. “It got to the point that I was doing interviews starting at 5 in the morning for European news shows until midnight for news shows in California, in between actually working on the farm.”

Currently, the video has more than 17 million views.

Klingenberg, who has been uploading videos to his YouTube channel since 2009, doesn’t know why that particular video went viral, but he has an idea.

“People had no idea cows were so into pop culture,” he joked. “You know how some people grow grass-fed or organic beef? We’re growing pop-cultured beef.”

Klingenberg shared a video compilation of reactions to that first viral video from around the world, ranging from bemused to amazed. It turns out, city folks of all ages are still interested in what happens out on the range.

“I always thought the media didn’t like farmers,” Klingenberg said. “I was wrong. Whenever they come out to the farm, they’re excited. They bring their cowboy boots.”

The success of that video and the ensuing media coverage brought both inspiration and opportunity. Klingenberg was invited to appear on a game show in London called Virtually Famous, his “cow art” appears in a volume of Ripley’s Believe It or Not, he was featured on the Discovery Channel and he gained a sponsor for his YouTube channel — Farmer’s Edge in Canada.

Klingenberg has also been invited to Germany several times to appear on TV and speak at ag conferences. He said this experience, in particular, has been valuable in terms of promoting a positive view of animal farming in a country where 11 percent of the population are vegetarian or vegan.

“I’m a big deal in Germany,” he told the crowd. “I’ve observed that the more wealthy a country, the more removed they are from ag. You all laugh because you’re like, ‘duh.’”

Another thing he noticed during his trips to Germany is how popular farming video games are with kids there. This sparked another idea. Klingenberg asked his cousin Ivan, a coder in San Diego, to build a robot for his tractor so it could be controlled via the internet. The latest video on the Farmer Derek channel shows him introducing the “Ghost Tractor” to a group of teenagers visiting from Kansas City.

“Next, I’m going to invite gamers on Twitch [an interactive gaming platform] to drive the tractor by typing commands into the chat,” Klingenberg said. “What could go wrong?”

Pioneer Bluffs Executive Director Lynn Smith said she first saw Klingenberg on the national news and knew he would be perfect for the site’s Prairie Talk series.

“Derek shows the humorous side of farming,” she said. “He’s this wonderful combination of a real person doing real things and using tech to show the ag industry to the world.”

Klingenberg’s appearance at Pioneer Bluffs drew a lot of advance publicity, not just locally but in Kansas City and Wichita. Smith said his brand of humor and accessibility is introducing more people to the Flint Hills.

“He brought in a large number of people to Pioneer Bluffs and the Flint Hills who have never been here before,” Smith said. “He’s good PR for the local ag industry.”

For Klingenberg, these videos serve as both a creative outlet for a talented individual and as a way to give people a glimpse into life on a family farm.

“It’s a win-win, because people are watching videos that show there are still family farms, not just corporate farms,” he said. “And it’s expanding. There’s been an explosion of farmers filming themselves working, just doing the day to-day work of running a farm, and giving people a look at what it takes. That’s a positive thing.”

“It’s a win-win, because people are watching videos that show there are still family farms, not just corporate farms."