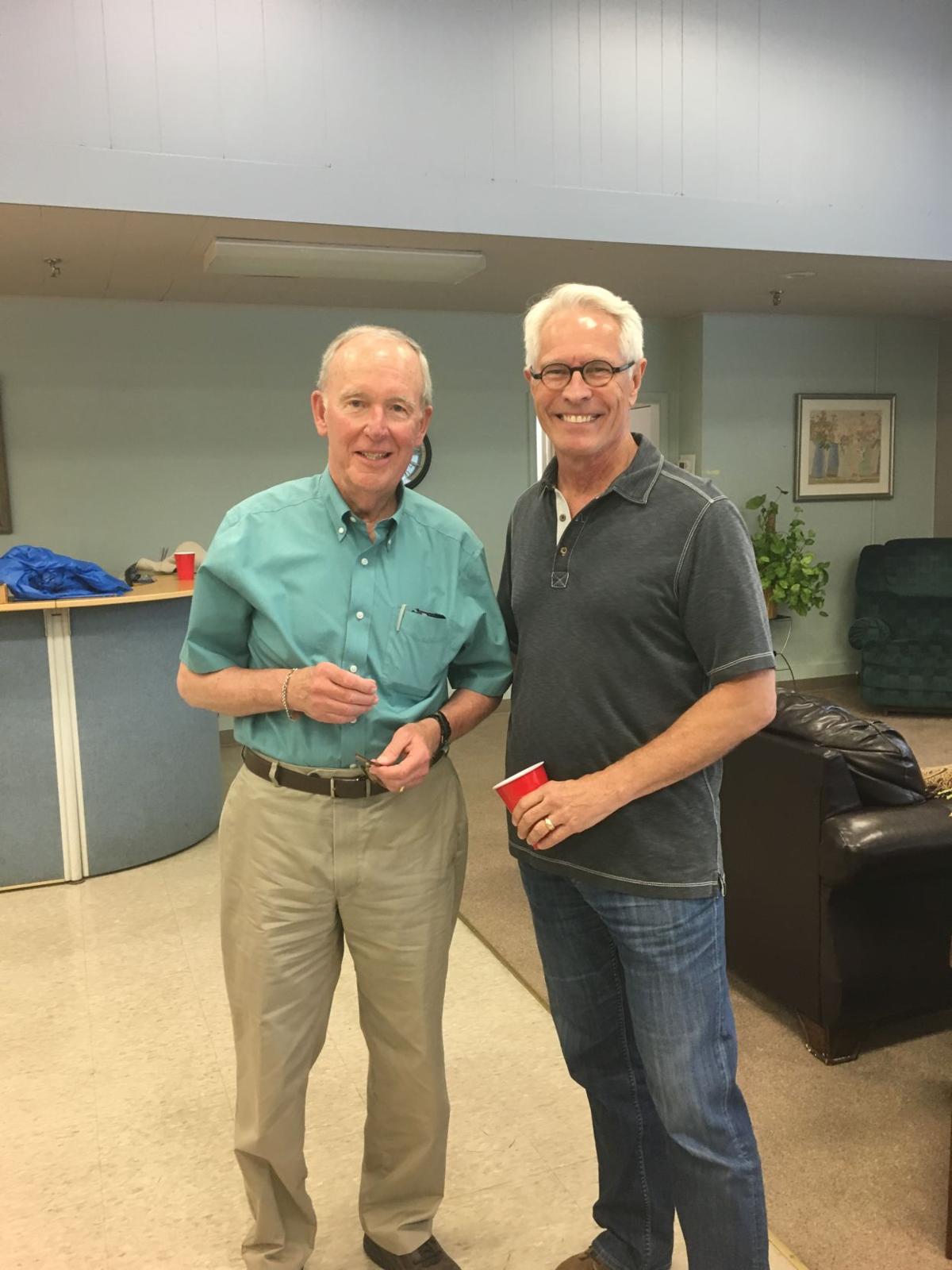 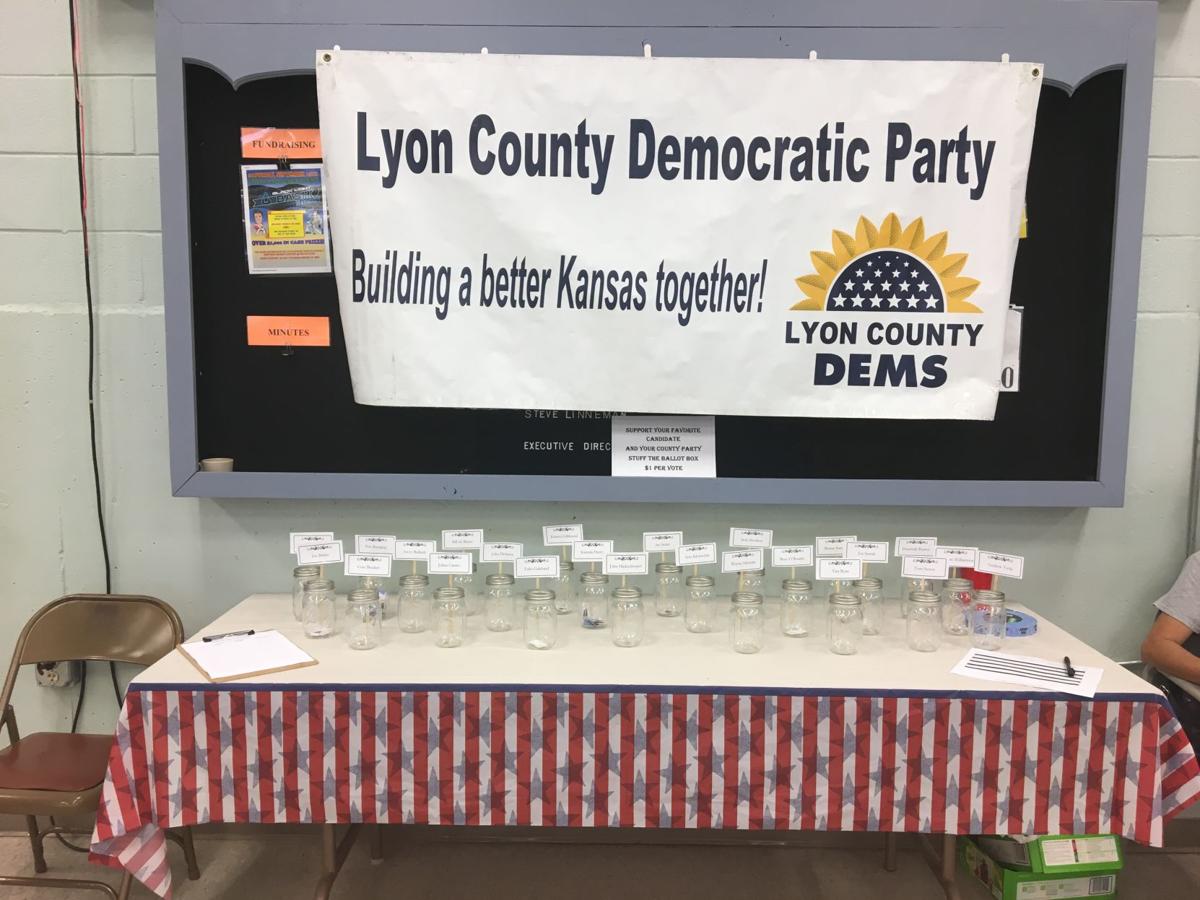 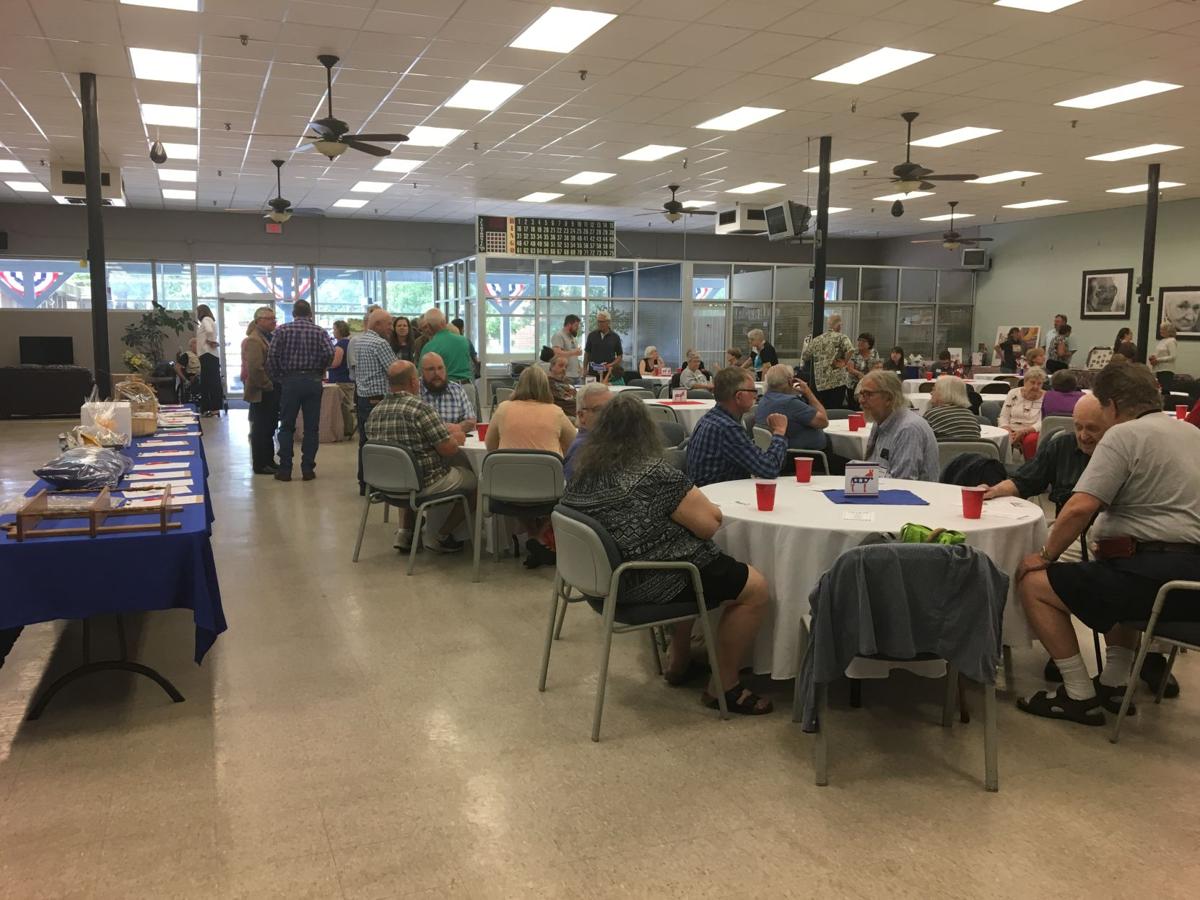 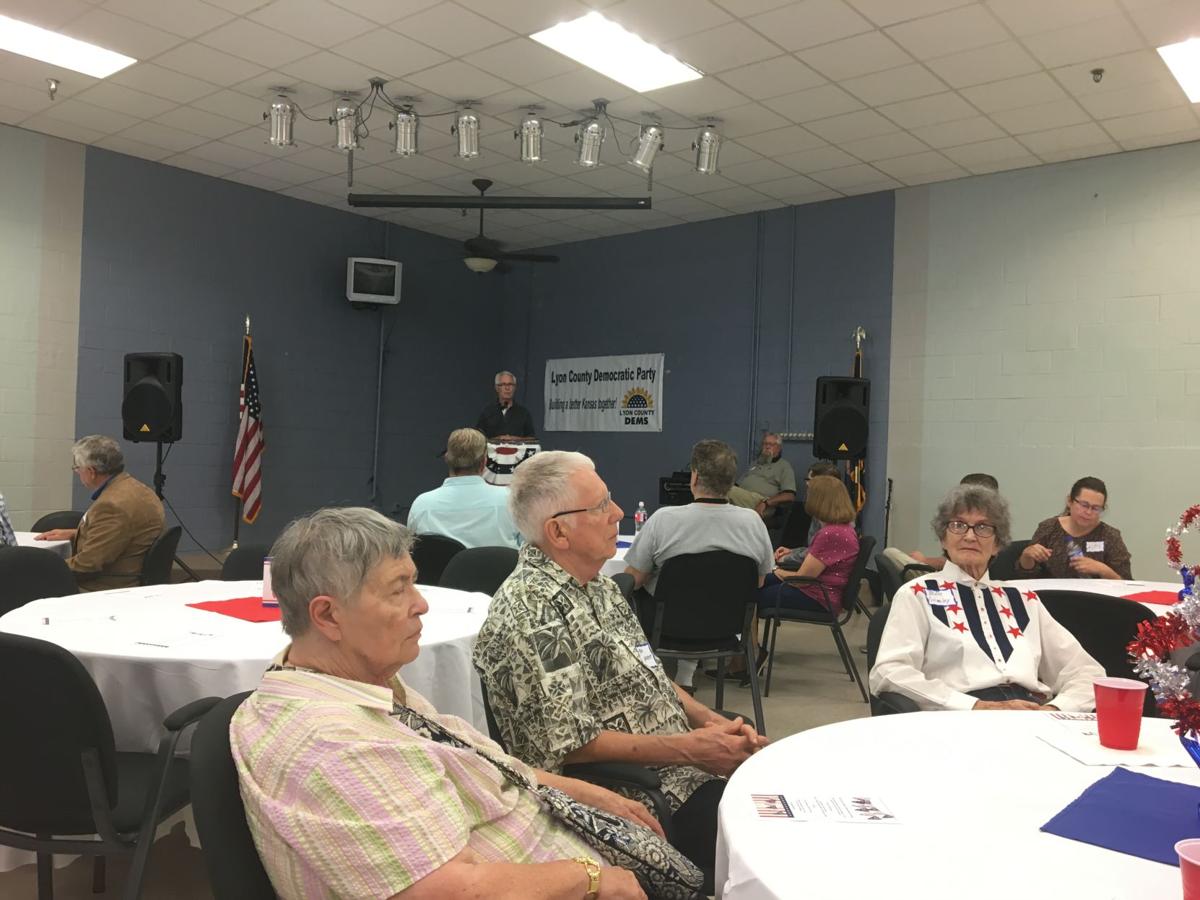 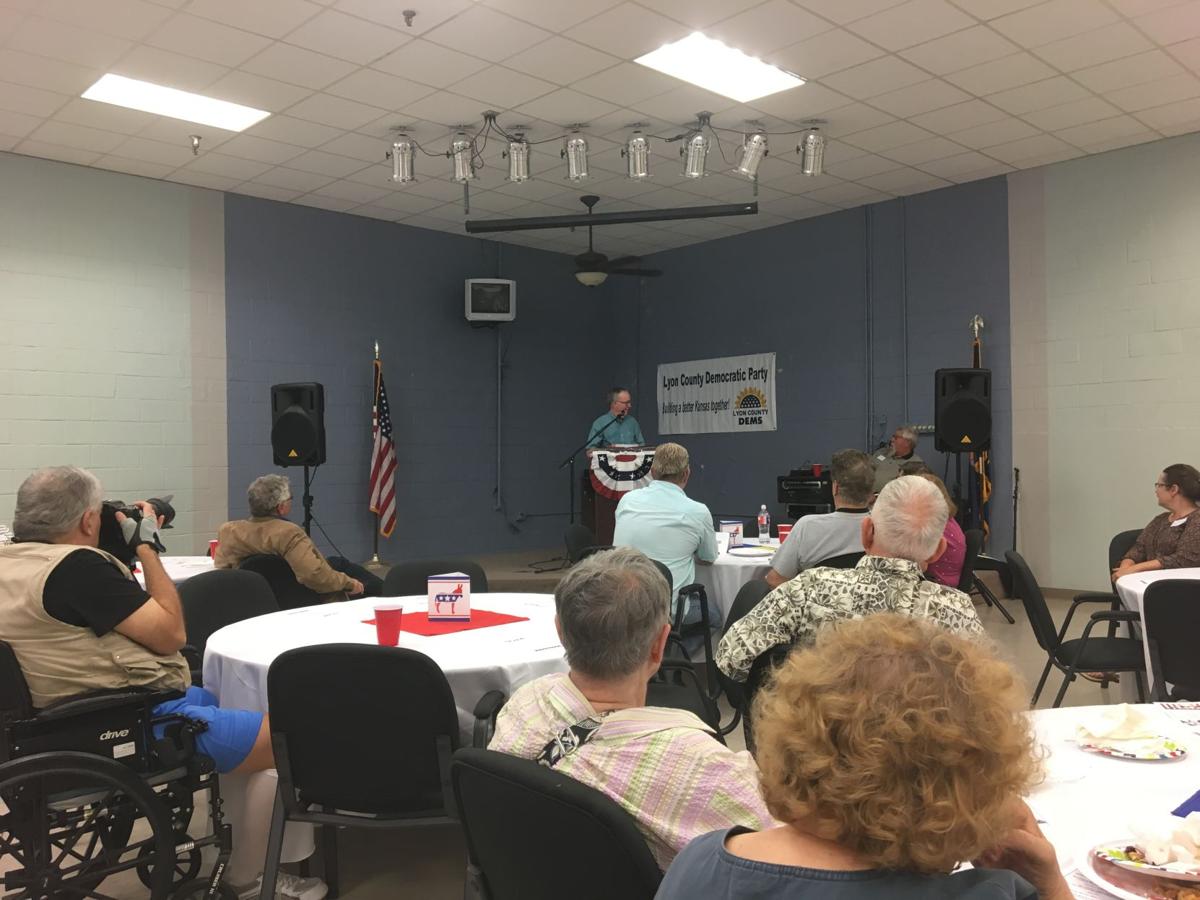 Local Democrats gathered together Sunday at the Emporia Senior Center for their annual picnic.

Fried chicken and many tables of sides fed attendees during the event, a silent auction was held, a straw poll was conducted and door prizes were raffled off.

Grissom, a Kansas City-area attorney and former U.S. attorney for the Kansas district, greeted guests at the entrance. Later, he spoke for five minutes about his perspective on the Democratic values of Kansas.

“We’ve got to really find a way to address the needs of our fellow Kansans, not merely having our state legislature expand Medicaid, but doing the things necessary on the national level that we don’t leave folks behind, just because they’re in an area that happens to be rural — and they happen to be some of the greatest farmers in the world.”

He told the room he was there to ask for their help.

“I know that in 2020 from the top of the ticket to the bottom of the ticket, as Democrats, as Americans, as Kansans, we can win this time,” he said.

“Rank choice voting essentially is caucusing by paper,” he said. “You are going to pick your first choice of the candidates that are available, your next choice … and rank them.”

Voters may rank as many candidates as they would like.

“If that candidate is not viable, just like the caucus, 15 percent is the threshold, your number two choice becomes your number one choice, and so on,” he explained.

Kansas is a caucus state. Hanna said a portion of the caucus will be conducted via mail.

Carlin said he was happy to be in Emporia because of his friends and the support Emporia has shown him.

“I want to start at the state level,” he said. “I want you to understand that next year, 2020, the entire legislature will be up. Now, cut to the chase, that’s important … [because] those elected in 2020 will have a lot to do with the maps for future congressional districts, and it makes a difference.”

Carlin emphasized the need for voter turnout, particularly among young adults, but reminding all ages of its importance.

“Who our candidate for president is going to be has a huge impact on what I’ve been talking about,” he said. “It makes a difference. Turnout, democrats in Kansas in a presidential year has impacted what the consensus is in terms of our candidate from our point of view. Too often, we have too many stay home.”

He spoke of his perspective on the popular Democratic candidates.

“We’ve had even more candidates for president than the Republicans had in 2016, and the quality — I trust and hope you can agree — is so superior to some of the folks who ran in the Republican primary, and we can be proud of them,” he said. “They’re intelligent. They mean well. They have different philosophies. I am very proud of the quality. I am also very proud of the national Democratic leadership for coming and devising a set of processes that I believe will give us a better chance to have the winner that’s really our best opportunity to go forward.”

“My motivation is consistent with my teaching in that — get people to understand how much is at stake,” Carlin said in an interview after his speech. “Make sure they appreciate that their futures are hanging there and could go north or south.”

Local resident Dennis Wiley said he appreciates gathering with local Democrats to lift his spirits and remind him that he is not alone in his thoughts and values.

“For me, some of my friends are so pro-Trump and the like,” Wiley said, “and they just think that every word out of his mouth is gospel, and it gets really depressing to be around them all the time.”

He also said events like the picnic are good opportunities for getting to know local candidates.

For more information on the Lyon County Democrats, call 412-8786 or email lycodems@yahoo.com.

When you click on the link provided it goes to the democrat group in Nevada. I hope that it gets changed!