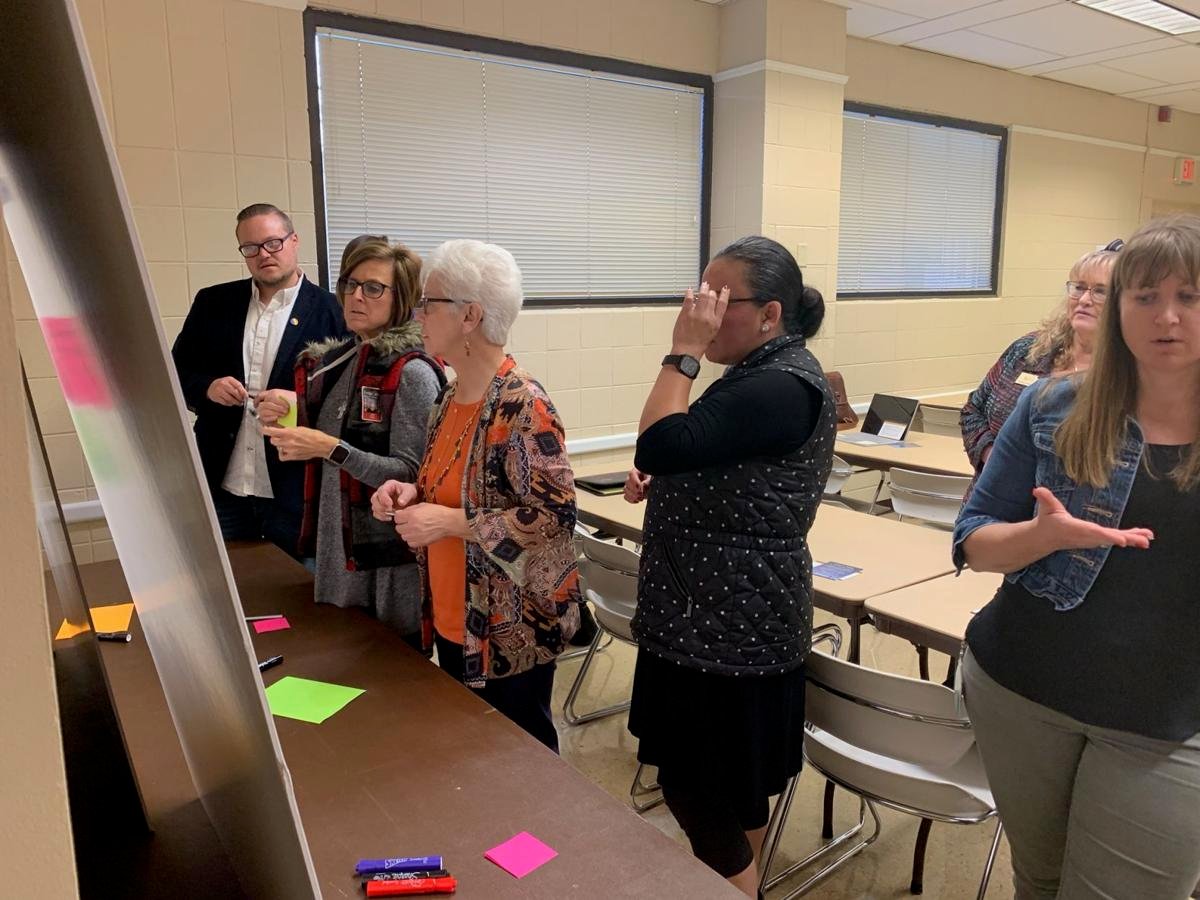 Local early childhood education advocates look over ideas posted on a poster board during a strategic planning session Thursday at the Emporia Public Library. 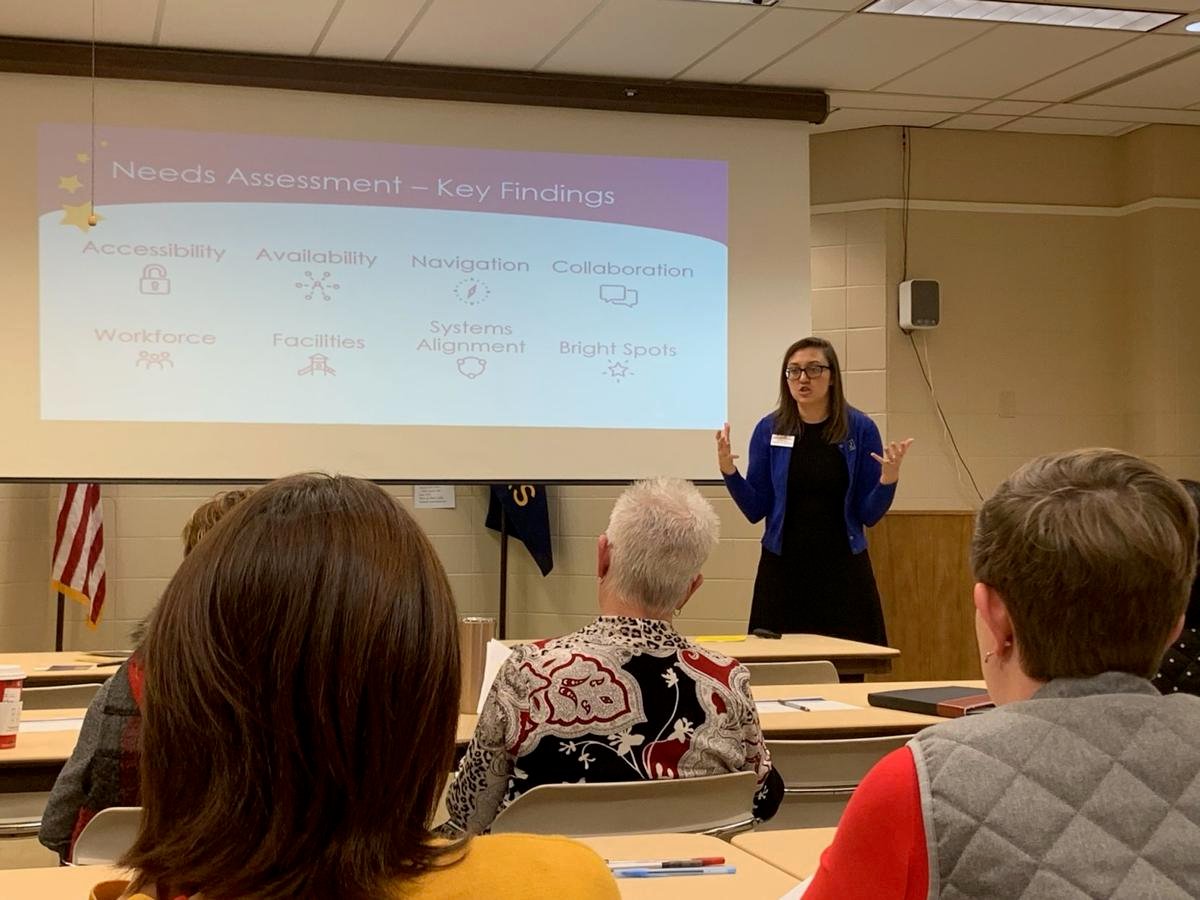 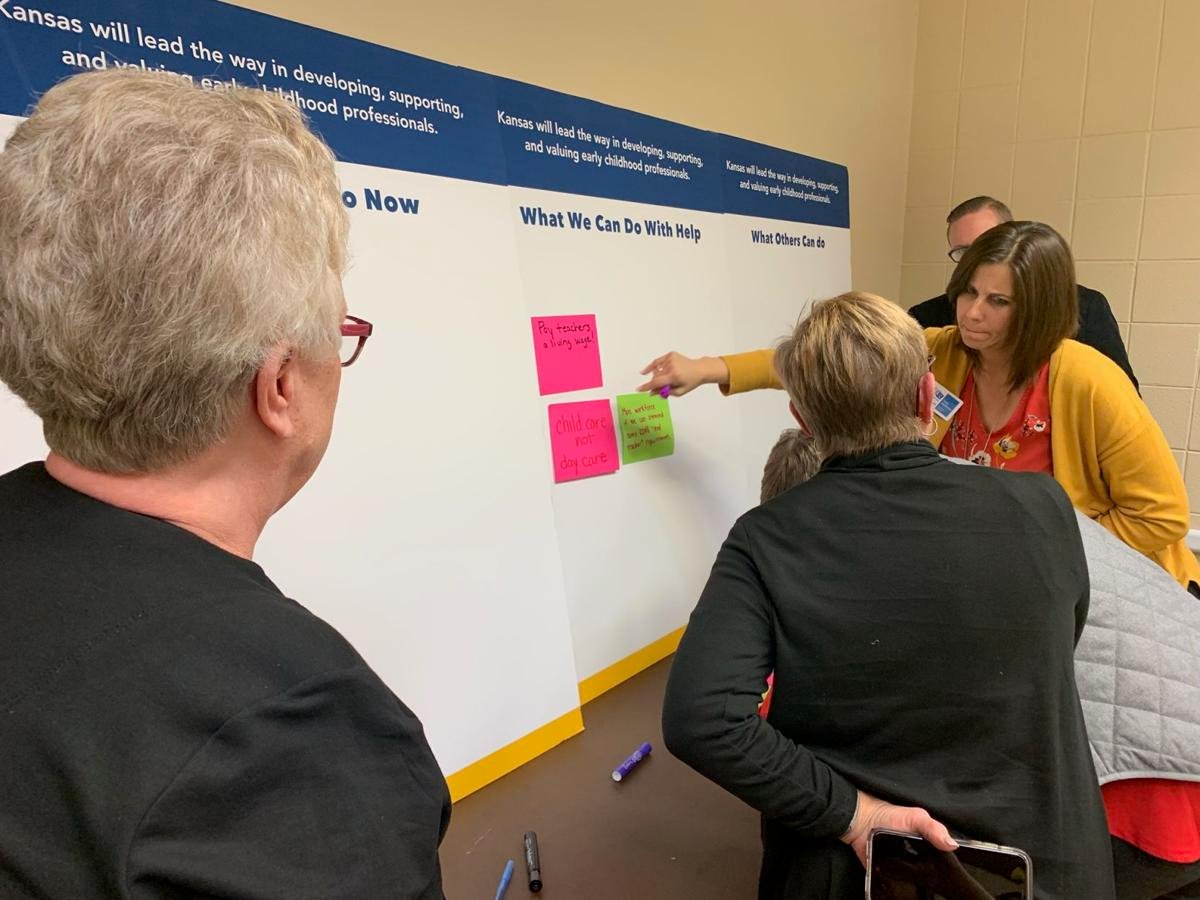 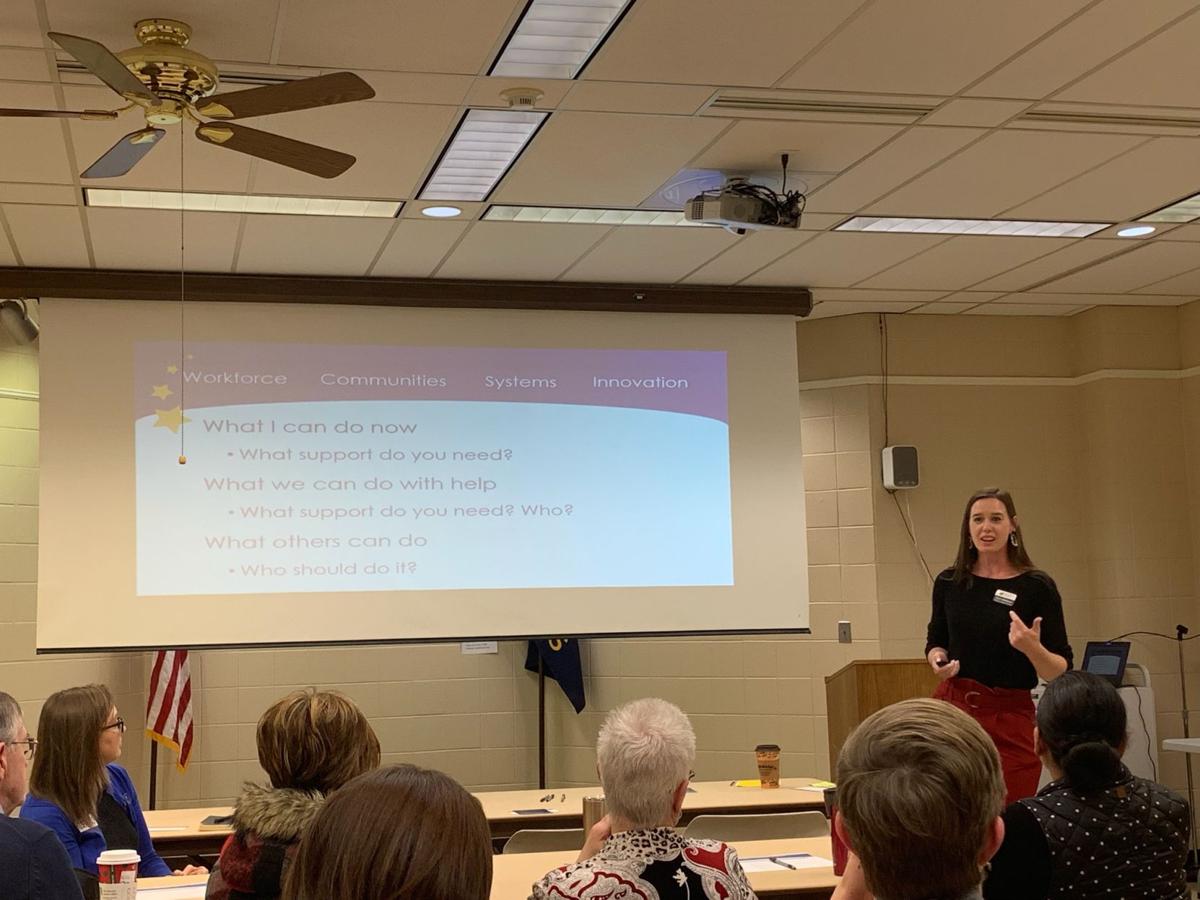 Local early childhood education advocates look over ideas posted on a poster board during a strategic planning session Thursday at the Emporia Public Library.

Stakeholders in early childhood education gathered to put their ideas together Thursday afternoon at the Emporia Public Library.

The event was part of a massive strategic planning and needs assessment process being conducted statewide by the Kansas State Department of Education; the next step in a project aimed at improving early childhood education throughout the state. The initiative is being funded through a $4.5 million federal grant and includes a statewide needs assessment, maximizing parental involvement and sharing best practices.

“We have something really special going on in our state right now,” KSDE Director of Early Childhood Amanda Peterson said.

During the needs assessment portion of the project, members of the KSDE visited between 30 and 50 communities to find out what the bright spots were locally, what were their visions for the future and what were the gaps between the two. They also met with small groups of parents to discuss specific needs and get stories of both those who were thriving in the area of early childhood education and those who were “barely surviving.”

Peterson said, through this process, they collected 2,279 stories — with at least one coming from each of the 105 counties in Kansas — and listened to more than 6,000 voices. All of that culminated in a governor’s symposium in early October.

A draft of the needs assessment was just recently completed, and Peterson said it can be boiled down to two central messages: Geography matters and environment.

“Where you live is tied to who you are and what your experiences are in early education,” she said.

“Young children growing up in families where their basic needs are not being met — like food and shelter — that’s going to affect how they communicate their needs.”

From that needs assessment, seven statements which will provide the building blocks of the strategic plan moving forward were developed.

• Kansas kids and families are stronger when their basic needs are being met.

• Kansas kids and families thrive when they have equitable access to comprehensive health and developmental services.

• Kansas kids are prepared for success in kindergarten and beyond when their families have equitable access to quality care and early learning environments.

• Kansas will lead the way in developing, supporting and valuing early childhood education.

• Kansas will empower and equip communities to create the best environments to raise a child.

• Kansas will align the early childhood care and education system for maximum impact.

• Kansas will champion innovation and create opportunities to invest in the future of Kansas kids.

The last four of those pieces are being called the “verbs” and are the focus of strategic planning.

Carri McMahon from Wichita State University’s Community Engagement Institute led a discussion on what types of programs and supports were already in place in Emporia and Lyon County.

“We hope you’re excited and inspired by what we’re working on,” she said. “The strategic plans are new, but your work is not. You’re already working on some of this in your community.”

Dennis Kear, executive director of the Kansas Masonic Literacy Center, highlighted work being done for children ages 0-5, including an initiative to expand participation in the Dolly Parton Imagination Library to the entire state. How KMLC is going to go about that is already being piloted in Barber and Linn counties.

Another attendee highlighted the expansion of early childhood services within the Southern Lyon County school district to newborns and infants. Previously, children could not enter the early childhood program until they were 2-and-a-half years old. They also plan to host a Play Conference in June geared toward early childhood caregivers throughout the state.

Following the discussion, those in attendance had a chance to offer up their ideas in writing. Four poster boards set up around the room represented the four verbs. Participants could post their ideas to improve quality of early childhood education in their communities as well as what obstacles were in the way of achieving those goals. They also were given three gold stars to show which ideas they liked as they read what others were posting around the room.

Some ideas presented included paying teachers better wages to keep quality educators in their districts, improving transportation to early childhood programs and advocating for developmentally-appropriate kindergarten for all students.

The ideas from Thursday’s session in Emporia along with several others throughout the state will be collected and used to develop the statewide strategic plan. To view ideas generated or give input, visit kschildrenscabinet.org/early-childhood.

“We’re all in this together, and we have a real opportunity to make a difference,” Peterson said.

"We're all in this together, and we have a real opportunity to make a difference."