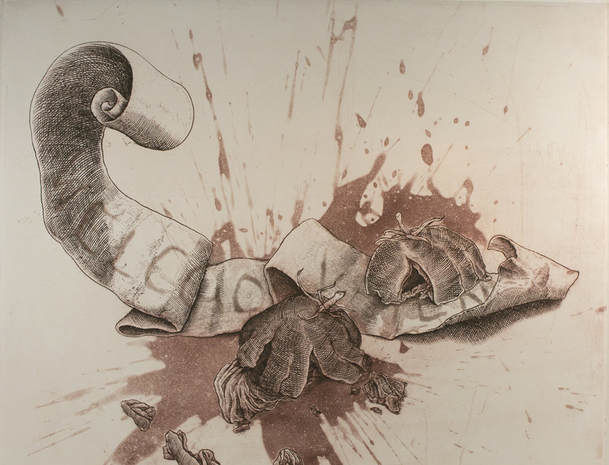 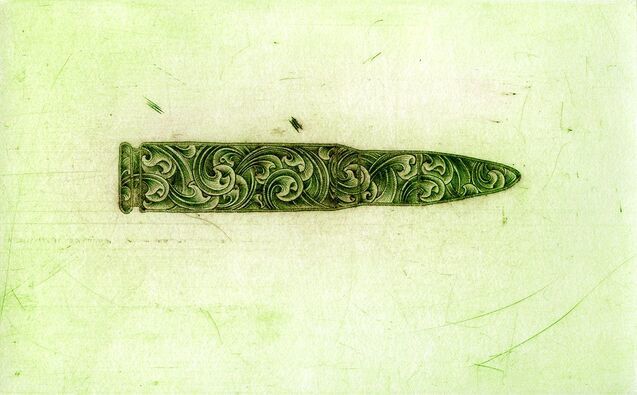 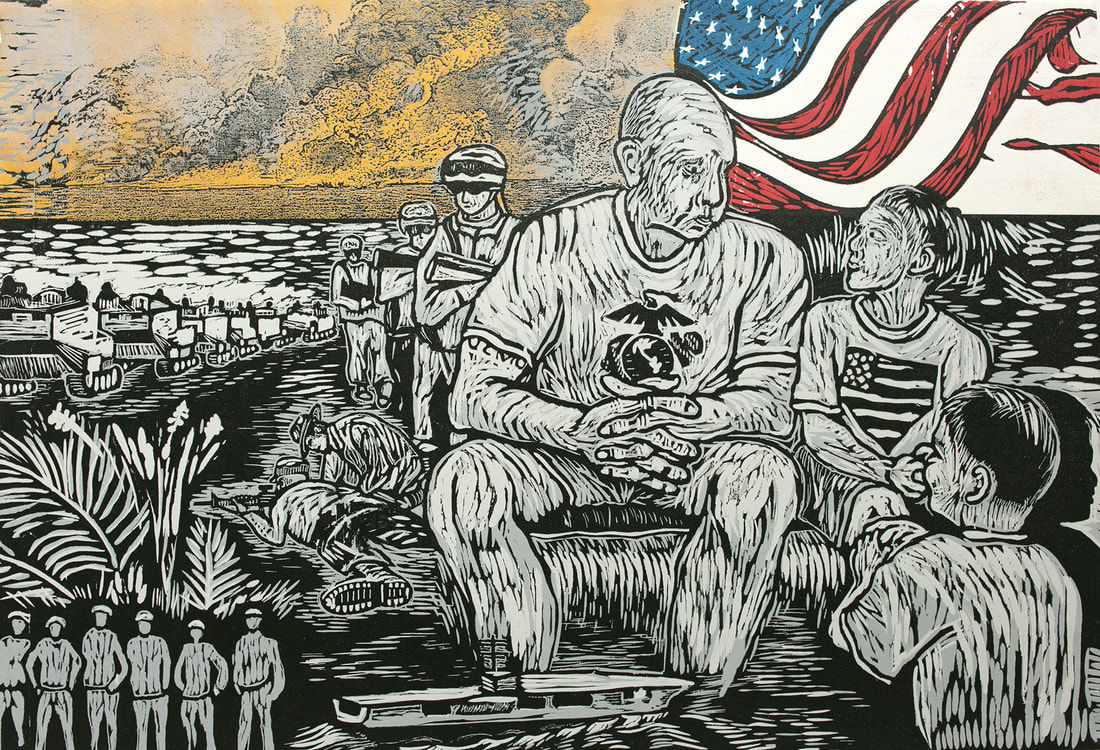 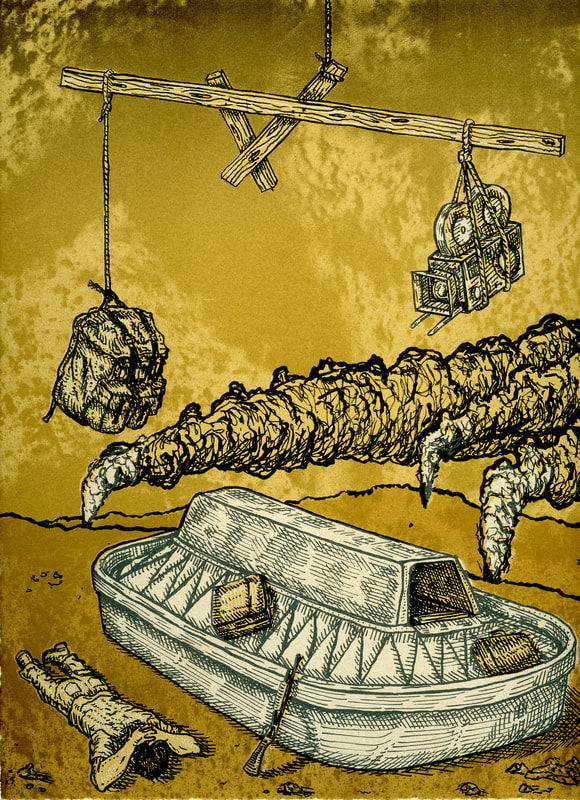 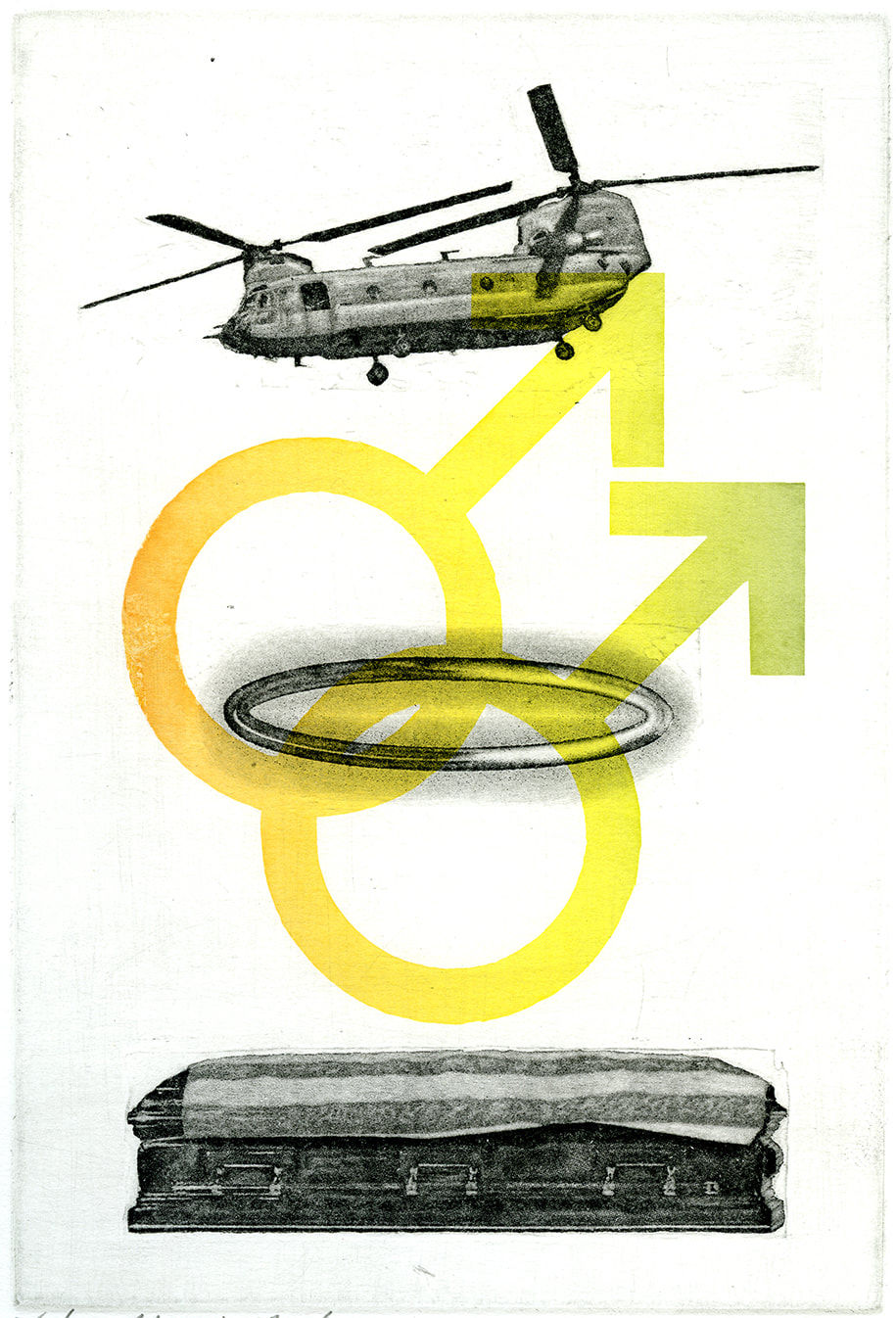 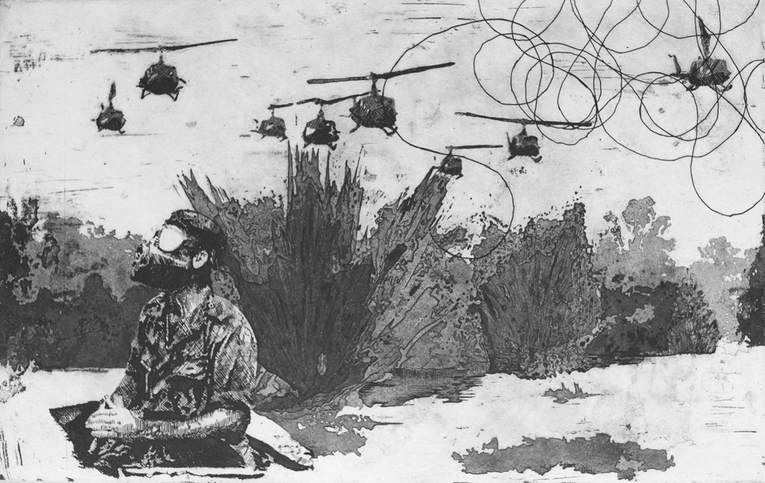 For the first time, the exhibition will be presented in conjunction with the Experiencing Veterans and Artists Collaborations project.

The Emporia Arts Center has participated in celebrating Veteran’s Day for about 10 years, but this is the first time it has welcomed an additional exhibition. EVAC aims to bring together veterans, civilians and artists, bridging the gap between civilian and veteran interaction and understanding.

EVAC Curator, Professor and Artist Lee Fearnside and her colleagues Joe Van Kerkhove and John Schupp initiated the project at Tiffin University in Ohio about two years ago.

“We were concerned about the isolation of student veterans from their peers,” Fearnside said, “and we were trying to figure out a way that we could get the civilian college student to talk with or understand the veteran college student, without the veteran student having to tell his or her story a bunch of times to a whole bunch of people.”

Fearnside believed “art would be the vehicle” for this pursuit. She and her colleagues began interviewing veterans with whom they had a personal connection. Some of these were students, and others were community members and referrals. After interviewing 20 veterans — ranging from World War II to post-9/11 veterans — the trio began searching for 20 printmakers to spend time with the interview recordings and transcripts and respond to the interview with an image.

With the maturity of the subject and the need for quality art, Fearnside emphasized the importance of bringing professional artists into this project.

“We’re very dedicated to only working with professional artists,” she said. “Originally, actually, we were thinking the project would be a student project at our university, but once we started to hear the stories, we realized, no, this needs not only a certain kind of maturity to handle, but it was important to us that we were able to give something tangible back to the veteran. So, we wanted to be sure that we would work with professional artists that would handle the stories with respect.”

After being introduced to the project, some artists requested to do more than one print, and EVAC was happy to accept. It currently has artists from 23 different states and one country outside of the U.S. The prints were made with a myriad of techniques, including etching, seriography, relief, engraving, mezzotint and more. Each artist made five prints — one to give the veteran, two for the traveling exhibitions and two to sell. Half of the funds from the prints that are sold is put back into EVAC. The other half is given to a charity of the artist’s choice, though many donate it right back into EVAC.

Most of the veterans say they’re “blown away” when they see the print, Fearnside said.

“A lot of people don’t think that their life experiences are particularly special or unique, so when they see that someone was able to hear their story and make art out of it, it’s often a great kind of validation for their experience,” she said.

She also said one veteran was “confused by the artist’s response.”

“That was a really important moment for the veteran to realize that it’s not just an illustration, it’s also the artist’s interpretation,” she said. “It was a really important moment for us, too, because it made us realize that, really, the artists become almost stand-ins for the civilian reaction to the stories. They’re trying to take this often kind of overwhelming information and make it into something tangible and something understandable.”

“When I listened to that first story, and wanting to do justice to it, there was a little part of me that felt like, ‘I don’t really feel like I have any business making work like this because I’m not a veteran,’” he said.

Ehlers wanted to do the story justice, but knew that the difficult stories the veteran told would inspire a sad image; otherwise, he would be lying about the tone of the stories.

Ehlers created the first print, an engraving and spit bite image of a “Welcome Home” banner crumpled on the ground, covered in smashed tomatoes.

“I felt conflicted about it,” he said. “I felt like it was honest, and sometimes honesty is not the thing that you want to hear.”

The excerpt displayed with the print partially reads, “When I got back from Vietnam, I think when all of us got back, there was a certain hollowness in the return … I expected a welcome … When our plane landed there was a gaggle of women on the other side of the chain link fence, and I thought, ‘Wow this is great, a welcome.’ Well it was welcome in terms of jeers, accusations of baby killer, of spitting. Being gone one month short of four years, I hadn’t had any knowledge of the animus that existed against Vietnam, U.S. involvement in Vietnam and directed at the Vietnam veterans.”

Ehlers heard back from the veteran after he received his print. He told Ehlers “it was perfect.”

“It felt really good that I was able to do that for him,” Ehlers said.

Ehlers informed EVAC that Emporia is the founding city of Veteran’s Day and that ESU has the only engraving concentration in the country. EVAC responded favorably and worked with EAC to bring the project to Emporia. The Emporia Public Library helped fund the cost to bring in the project.

There are 48 prints from 44 different artists on display. It is the largest exhibition of the project to date.

“Usually … a gallery can only expect 20 pieces, or maybe they can only have 30 of the pieces, but we will be showing 48 of them.”

“As the Veteran’s Day origin place, I really hope that it’s a way to show that community that Veteran’s Day is not just a day, that it’s a continual process,” Fearnside said. “Storytelling is one of our vital human impulses. It’s really our way to understand each other, so I’m hoping that this might spark other conversations.”

“I feel like a lot of younger people don’t really understand what veterans went through,” Mock said, “so this gives them a glimpse into what that has been like, and maybe they’ll be able to respect the sacrifices that those individuals have made a little bit more and be able to seek out a veteran and tell them thank you.”

The artist reception will take place 4 - 6 p.m. Friday during Emporia First Friday. The Awards Ceremony for the Veteran Artist Exhibition will begin at 4:30. The exhibition and respective events are free and open to the public.

“Storytelling is one of our vital human impulses. It’s really our way to understand each other, so I’m hoping that this might spark other conversations.”