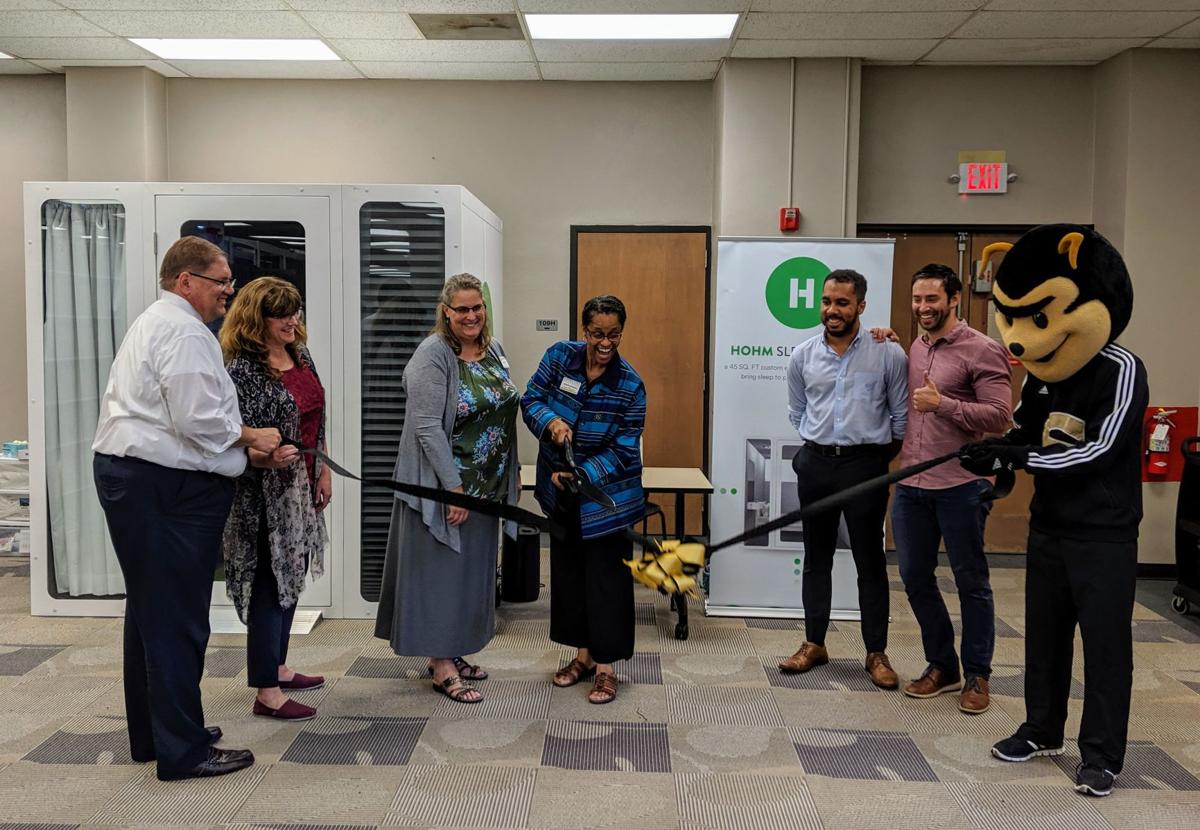 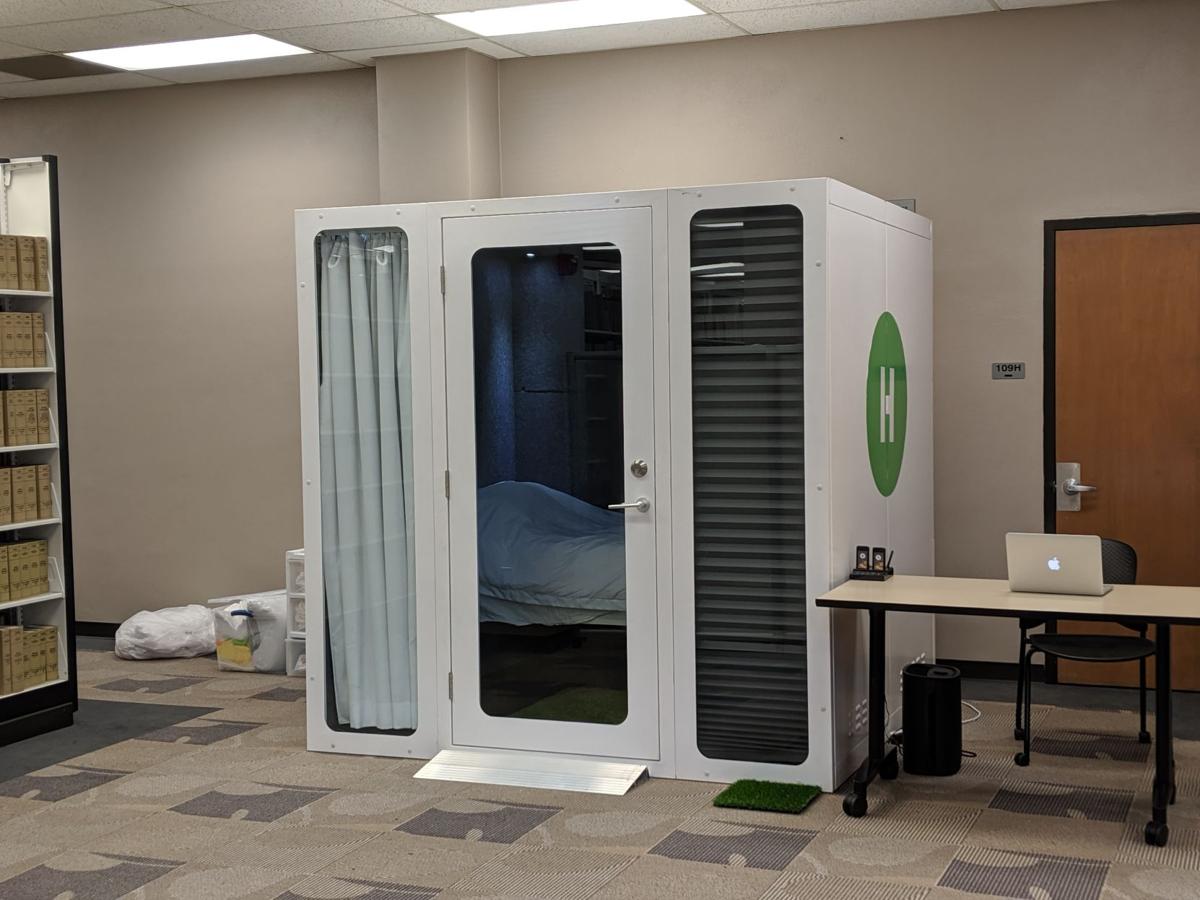 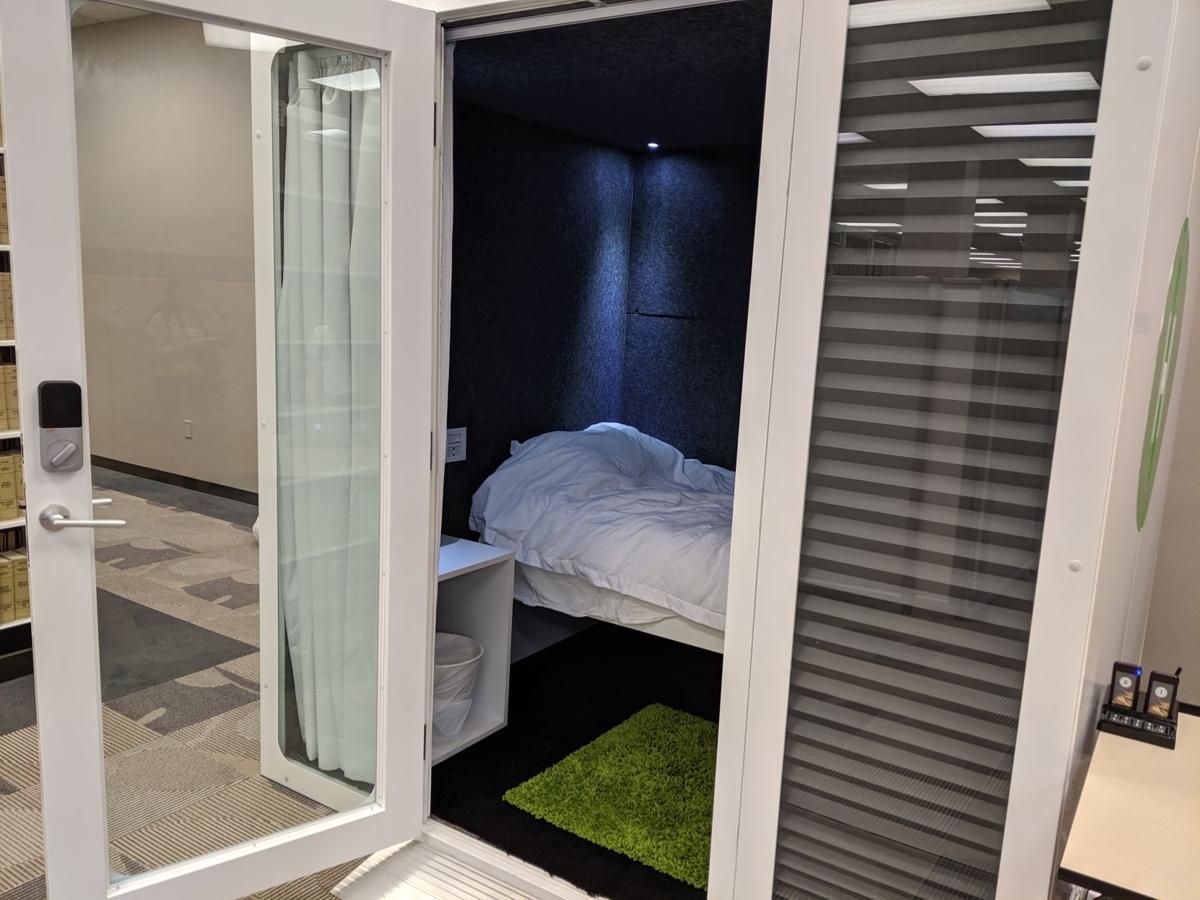 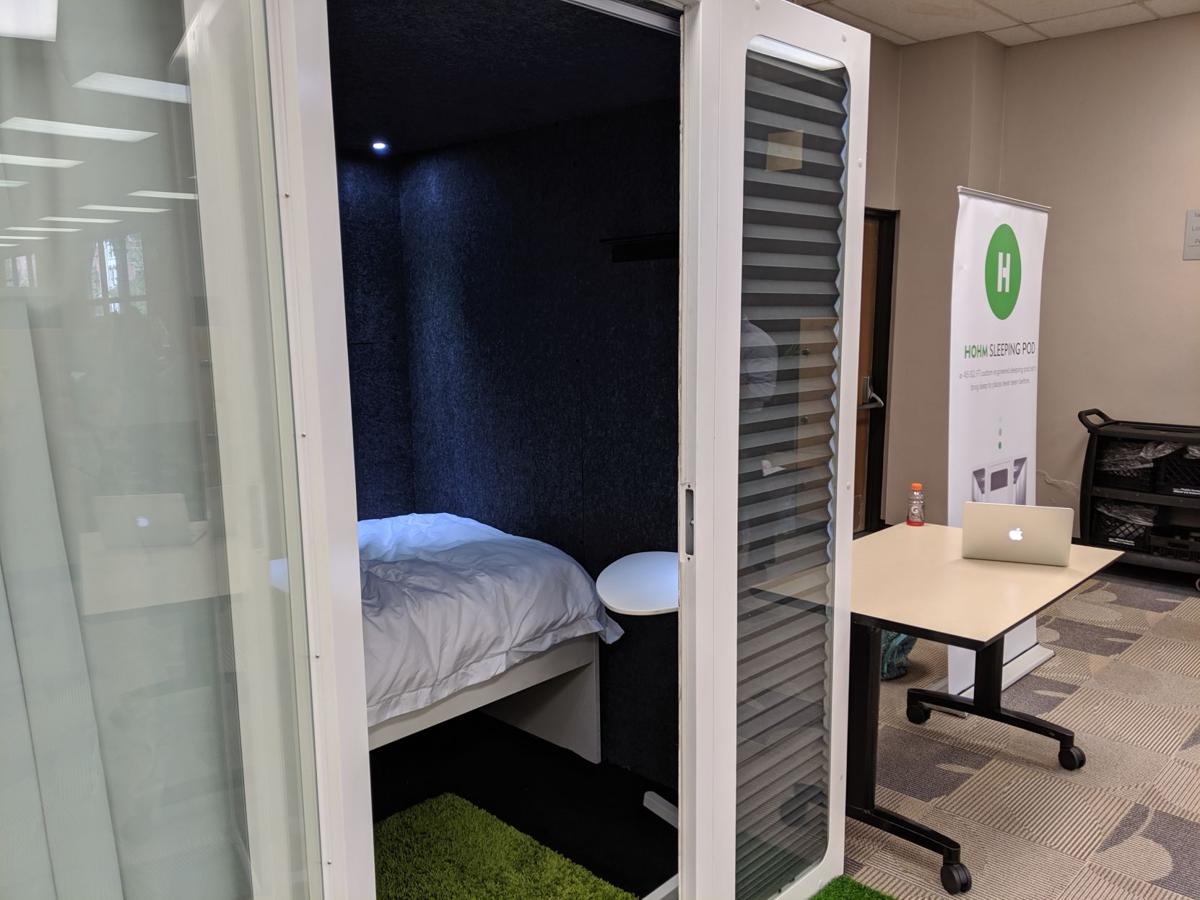 The American Academy of Sleep recommends college students get at least seven to eight hours of rest a night.

Packed class schedules and extracurricular activities, however, don’t always make that goal practical. A new space at Emporia State University is hoping to remedy the problem.

During an official unveiling Monday at the William Allen White Library, ESU joined the University of Arizona as the only institutions in the nation to offer students on-campus “nap pods.”

“There’s a survey that’s done nationally called the National College Health Assessment, and students both at ESU and across the country consistently identify sleep difficulties as one of the top five reasons that they may not do their best academically,” Director of Student Health Services Mary McDaniel-Anschutz said. “We hope spaces like these will give students the opportunity to catch a safe power nap. On just about any given day, you can walk through campus and see a student taking a snooze somewhere. You kind of leave yourself vulnerable when you do that. This is just a really cool way to feel safe, which can help lead to a deeper sleep.”

Designed by San Diego-based HOHM Inc., the 43.5 square foot, bedroom-like pod features a twin-sized bed, a sound-blocking curtain and charging stations for cell phones and laptops. Students can schedule reservations — ranging from 30 minutes to four hours — online at www.hohm.life or through the HOHM app every day from 3 p.m. to 8 p.m. on a first-come-first-serve basis. Student staff will be on sight during regular hours to ensure smooth check-in and check-out, functioning alarms, single occupancy and clean rooms by changing sheets after each use.

“We got emails from [HOHM] and did a little research before reaching out to ask what this all entailed,” Director of the Memorial Union Carmen Leeds said. “Through several conference calls, we realized that this is completely free to Emporia State. HOHM is really trying to get on campuses and get their name out to see how it all works. There’s absolutely no cost as of now … going into the second year, I’m not sure what it will look like, but we don’t intend on paying anything. We hope they continue to have sponsors so the cost will be free.”

“We like the idea of being cutting-edge,” added Jim Williams, Vice President of Student Affairs. “We like the idea of trying out new things, and the fact that HOHM provided the pod to us was something that we thought made some sense. It meets some needs that we have on campus and it’s a great opportunity to try it out.”

Starting out, each Hornet will be granted two free hours of pod time per month, and although only one pod was showcased Monday, another is planned to be installed in the Memorial Union sometime in October.

“Our first installation with the University of Arizona was a wild success, with nearly 250 bookings in the first 10 weeks,” Founder and CEO of HOHM Nikolas Woods said “It’s clear that students need a safe, comfortable and convenient way to get rest on campus. We can’t wait to see the reaction from Emporia State University.

“At our first launch, we had students coming up to thank us because they were having to find weird places to sleep in the student union. One girl in particular dealt with fibromyalgia, so she was always in pain on campus. She said the pods were a great place for her to go to recharge. Even the union director was using it as a place to meditate every other week … We we’re amazed with how fast Emporia State reached out on this. We talked to a lot of other schools, but this was probably the quickest response from the staff here ... We think this is going to be something that’s great for students not only this year, but the next 10 years.”

As a college student, I don’t fully trust or like these nap pods just because I don’t trust they’ll be clean, but the idea of students napping on campus and having places to do that is good. I’ve been working part time the entire time I’ve been in college, and I would have worked more if I wasn’t spending the rest of my time doing homework and studying. I’ve frequently gone about my days sleep deprived because, even I wanted to, I didn’t have time to nap because I was too busy with course work and my job. I can’t imagine how sleep deprived students who work full time are or who have kids or are taking over 20 credit hours in one semester. College students don’t leave feeling entitled, many of us leave and move in with parents because we can’t afford our own apartments because we can’t find jobs that pay us well enough to afford a place to live AND pay off our crippling debt from years of getting a college degree that we need in order to get better jobs. I know there are people in the work force equally as exhausted as college students, and they should have a place to close their eyes if they want to spend their lunch break getting a quick nap. There are countless places in Japan where employers do offer nap rooms with beds because employees work 12-15 hours, and it wouldn’t be a bad thing if employers here did the same thing. Rested employees are more productive, so if they could take naps, production would likely go up. Everyone needs a nap sometime, and it’s not a bad thing for ESU to recognize that and try to meet students’ needs. I don’t personally trust those nap pods and would rather go home if I ever needed and had time for a nap, but good on ESU for trying to encourage being well rested and less sleep deprived.

Isn't there a real issue with both Hep A and bedbugs along with some other viruses and diseases in Lyon County? The last report I read said that there were. Imagine flu season! Something to weigh before climbing into a sleeping pod, so good that you brought that up. Before going to college, students need to research where jobs exist and what they pay. Far too many do not do this, and end up not being able to get a job. It seems that they think they should pick something they would love to do, and then they should be paid enough to live the way that they desire. The sooner they get in touch with what real life is like, the better off they will be. The world is not anxiously awaiting their arrival so that they can fulfill their dreams, that is a "do-it-yourself" job! I don't think many here will be working in Japan. Planning ahead might be just what is needed in the whole scheme of things for college life and beyond. ESU has really changed since my son attended in the mid-90s, and with that, I will close.

I did speak with one of the representatives, and he said they have 5 student employees that will clean the rooms between each use and change sheets, so hopefully some of the sickness stuff is mitigated with that. The nature of the pods, I think, will make it hard to stop spreading sickness, but hopefully it’s not too bad. There’s another university that has these, and I don’t think they’ve had a huge problem.

As for all of the job stuff/students needing to “get in touch with what real life is like,” I don’t think we can get to a place of agreement, so I’m going to just let that rest. While there are some people out there as entitled and out of touch as you seem to think students are, the majority of us are all too aware how hard real life is, and very few of us are holding on to the idea that the world is anxiously awaiting our arrival (except for the loan companies anxiously awaiting our payments). Japan was just an example that naps in the workplace might not be a bad idea to mimic elsewhere; most of us aren’t going to work in Japan.

Snow, you never went to College, did you.

Every successful student knows 12 hour- shifts don't exist Not when one lives, eats, breaths academics while balancing work and athletics, too.

Successful? Then you don't consider a nursing degree being a success as many of them know the 12 shift. Actually your post makes no sense, so I don't know where to go with that. Maybe naps are necessary. And, yes, I went to college on the GI Bill and worked while also caring for a small child. The child did take naps until he was about 4 years old. Of course, he went to college and worked his way through also. I guess we never thought about taking naps at school after 1st grade.

It's unfortunate that you've generalized all college students as lazy kids. Some students are busy parents and/or work jobs in addition to taking classes. If they want to grab a little shut eye, and ESU recognizes that an exhausted , fatigued human can benefit from a safe, private place to nap on campus, well then good for them. Expand your ideas of what a college student looks like. Nontraditional students are students too.

I was both traditional and non-traditional student. Maybe eating right and exercising might give the students more energy, and avoiding alcohol and drugs????????

And, I thought only pre-K took naps at school. I guess things are really changing. I can see the future where employers must provide a nap area for their employees. Students, by the time they are in college, should be starting to set priorities and get ready for having jobs. Those that don't go to college and go into the work force? I guess they just have to suck it up working those 12 hours shifts without a nap cubicle being employer provided. What will they come up with next to coddle students and make them even more entitled as they leave college and hope to elect politicians that will forgive their debt, the debt accrued "while they were sleeping".