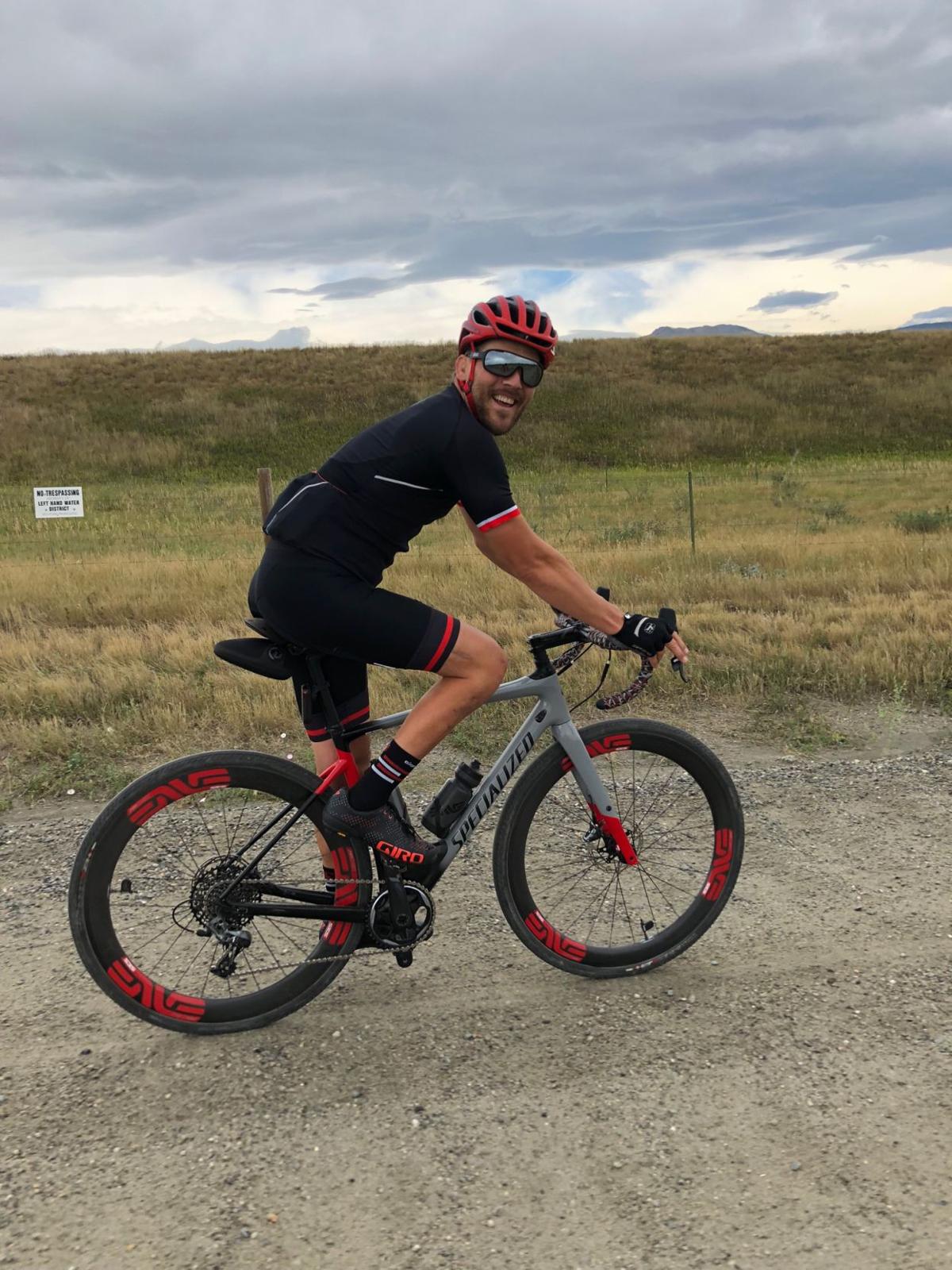 Mitch Brekke rides a gravel road during the summer of 2018, just one year after he was nearly killed when he was hit by a car. 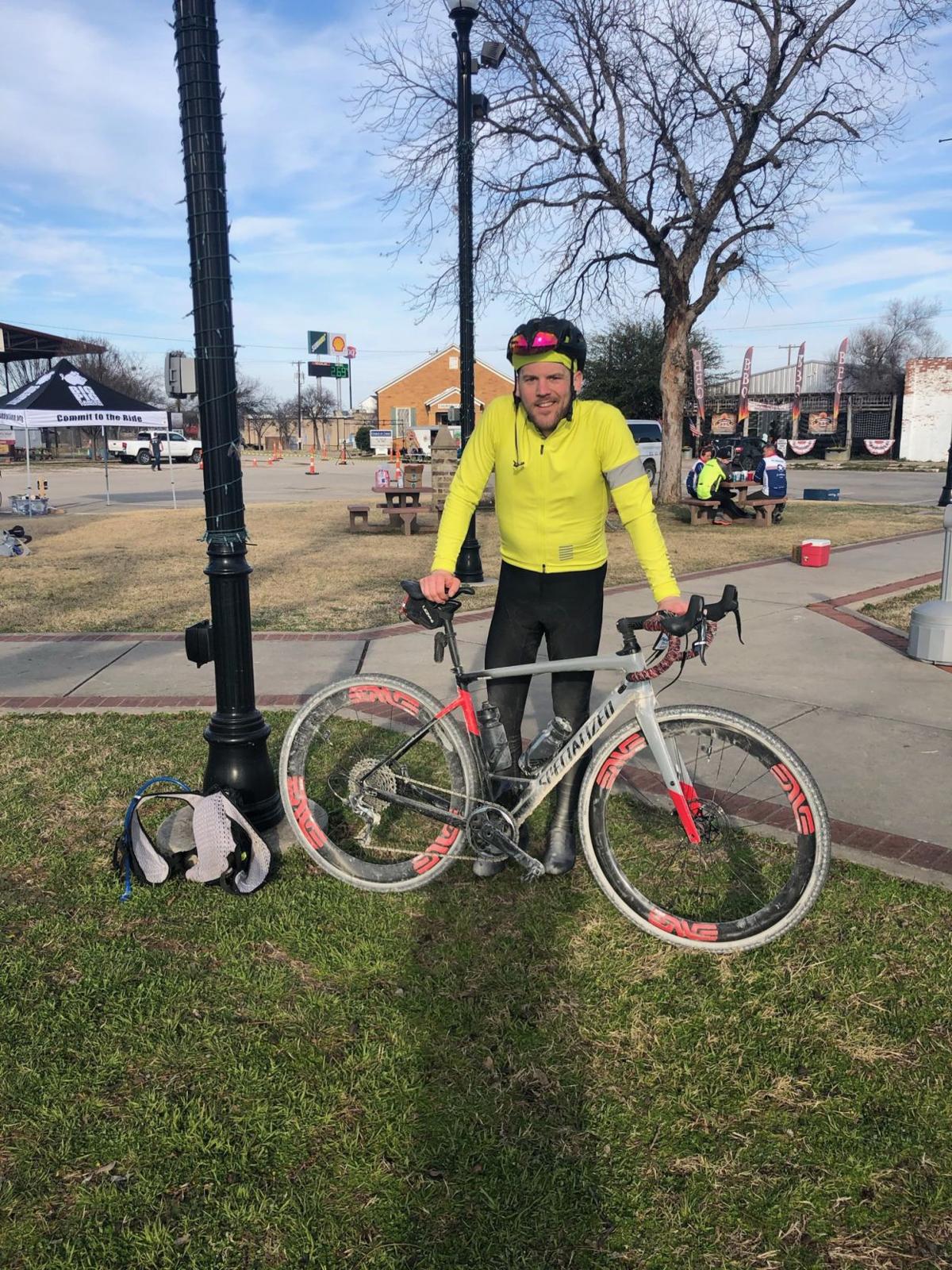 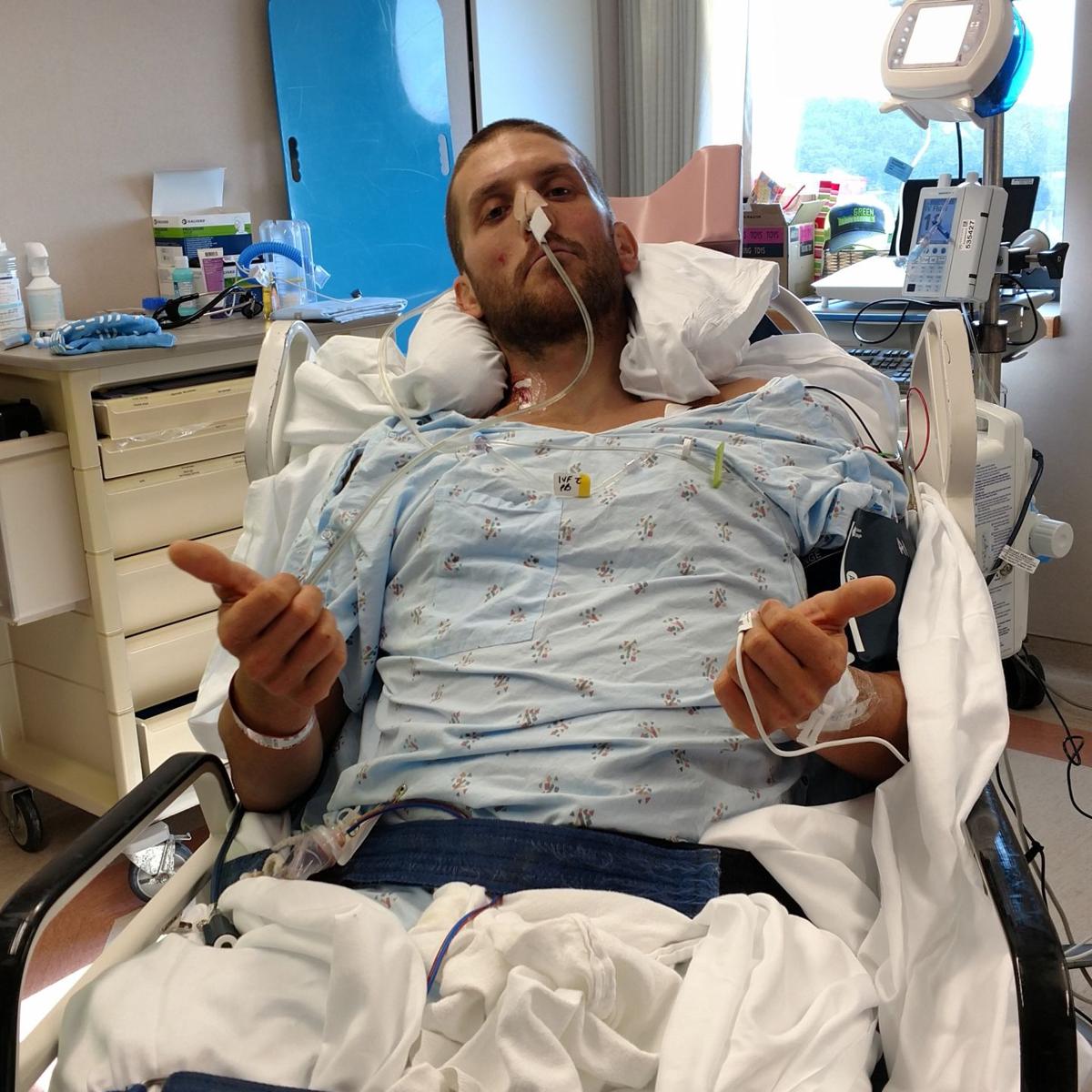 Mitch Brekke gives the thumbs up while in the Mayo Clinic Hospital in Rochester, Minnesota, following a near fatal accident in July 2017. 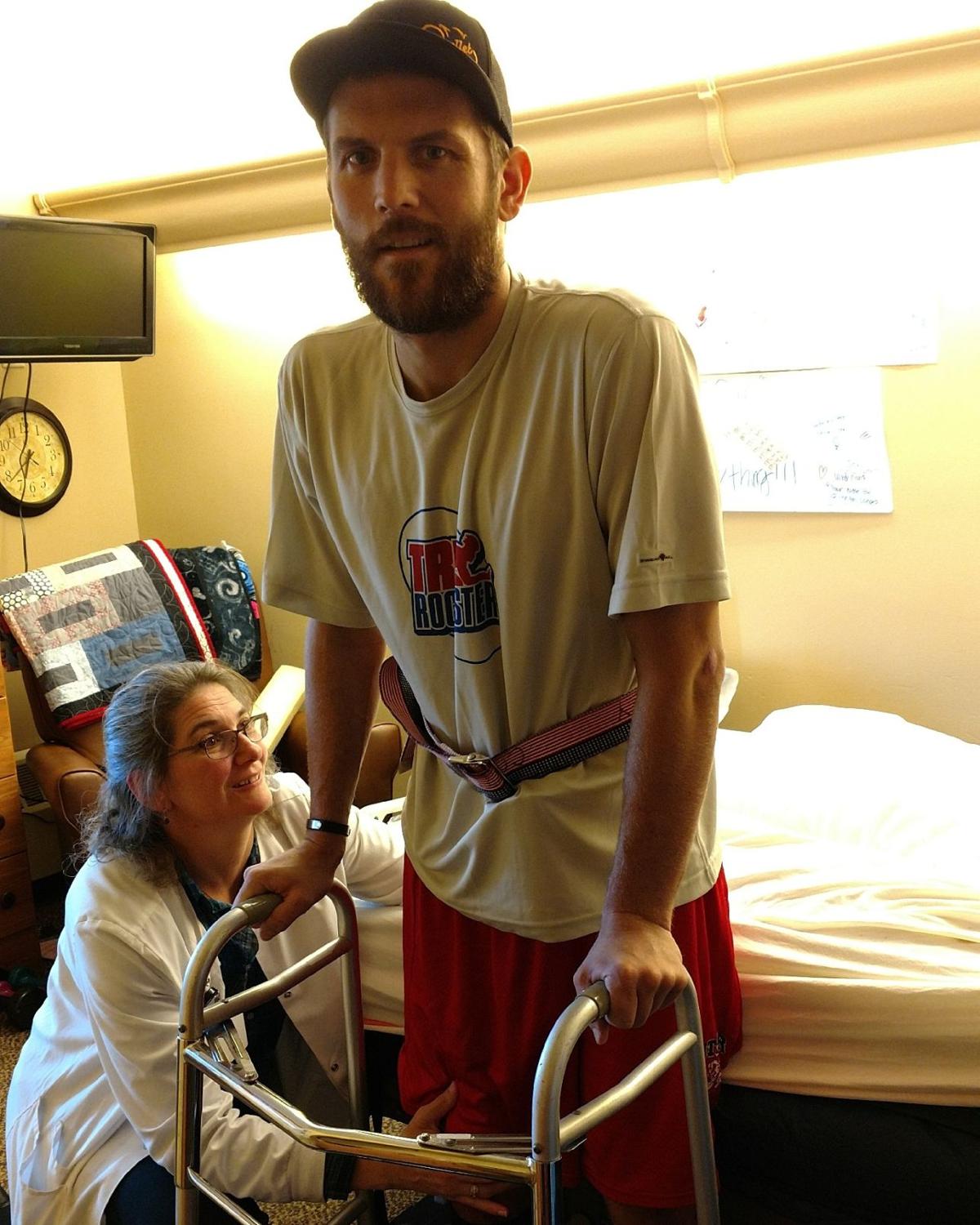 Mitch Brekke stands up with the aide of a walker while recovering from a horrific accident. He is racing in today’s Dirty Kanza 200.

Mitch Brekke rides a gravel road during the summer of 2018, just one year after he was nearly killed when he was hit by a car.

Mitch Brekke gives the thumbs up while in the Mayo Clinic Hospital in Rochester, Minnesota, following a near fatal accident in July 2017.

Mitch Brekke stands up with the aide of a walker while recovering from a horrific accident. He is racing in today’s Dirty Kanza 200.

Mitch Brekke, by his own admission, is lucky to be alive.

Less than two years ago a horrific accident left him physically broken in several ways — but his spirit and determination never wavered. Now, he's ready to take on the Dirty Kanza 200.

"I decided the summer after my accident that I was going to make that my goal," Brekke said of the DK.

But getting from where he was to riding in today's race was no small task.

A 30-year-old farmer from Hartland, Minnesota, Brekke had been doing triathlons for about four years before he got into road racing.

He was competitive, and it was becoming a big part of his life. Then, on a normal Tuesday night ride with some friends in July 2017, everything changed.

"We were riding in a paceline so we were moving at a pretty good speed," Brekke said. "There was some debris in the roadway and I hit it and swerved and went flying over my handlebars at about 30 miles per hour. There was a small SUV coming at the same time and I ended up over the yellow line. It ran right over me. It was a completely freak accident."

Both the front and back tires of the vehicle went over the middle of his body, which was lying parallel to the road. He said there was no way the driver could have stopped in time to avoid him.

Among his numerous injuries, Brekke severed his femoral artery. Luckily, one of his fellow riders, Chris Crocker, was an ex-special forces medic and was able to control the bleeding until help arrived.

"I should have bled out," Brekke said. "The people I was riding with — and the fact I was wearing a helmet, because that was broken and I still had a pretty bad concussion — are definitely the reason I'm still alive."

He said he remembers lying in the roadway and his friends being there with him, but most of the incident is a blur. When all the injuries were tallied, he had severed his femoral artery; suffered degloving — the removal of skin from underlying tissue, severing its blood supply — to his lower buttocks and upper thigh; crushed his pelvis — which had to be completely reconstructed; broken 14 or 15 ribs, his collar bone and multiple vertebrae; and completely dislocated his femur from his hip joint — an injury which almost cost him his leg. He also had a collapsed lung and suffered kidney failure during his stay in the hospital, forcing him to spend time on dialysis.

Working his way back

Brekke spent two weeks in intensive care at the Mayo Clinic Hospital in Rochester, Minnesota. He underwent several surgeries and, between the anesthesia and heavy painkillers, he said much of that time was also a blur.

He did, however, come to one conclusion during those early days in the hospital.

"Within the first two weeks it started to make sense to me," he said. "I just decided I was going to fight and get better."

He got out of the ICU after two weeks and, after another fortnight in the hospital, he was able to be moved to a nursing home. That is where he spent the next two months, and also where he hit his first big milestones.

It was during his time at the nursing home he was able to stand up for the first time since the accident. He was allowed to go home to his parents' house in Oct. 2017, and was eventually able to walk with the aide of a walker.

In Jan. 2018, his recovery was put on a brief hiatus when he had his colostomy bag removed, the surgery for which laid him up for a couple more months. In March 2018, he was able to start walking with a cane and got on his indoor bike for the first time since the accident.

"I couldn't really do anything for myself until March or April," he said. "My parents and my sister did everything for me, so I was able to just focus on getting my strength back. They were huge for me getting better."

That Spring, he was able to move back into his own home and rode his first 10 miles on gravel before he even gave up his cane. By mid-June, he was able to walk without assistance.

Though he always knew he couldn't just lay around the rest of his life, Brekke admitted he didn't know if he would ever be able to resume his athletic endeavors.

"By the time I got to the nursing home, I knew I wouldn't just lay around forever," he said. "I was starting to see progress, and it's more motivating when you're seeing progress. But I really didn't know (if I'd be able to compete again). I wanted to, and the best way to get back on your feet is to have a goal."

Eyes on the DK

Brekke got the goal he needed in early June 2018 when he visited Emporia to crew for a friend riding in the Dirty Kanza. He knew of the event prior to his accident, but after experiencing it as somewhat of an outsider, he knew it was what he wanted to work toward.

"This is the biggest deal in all of gravel racing," he said. "This is the one everyone wants to try."

Biking is something he's able to do despite his injuries as it does not, as running would, put impact on his joints. He still walks with a bit of a limp as he cannot move his right ankle and has drop foot on the right side, but that doesn't matter when he can strap it into a bike pedal.

Once Brekke had a tough, but attainable goal in mind, he got to work. He lives on a gravel road, something he said gives him "endless training right outside of his front door." During what was a brutal winter — even by Minnesota standards — he put the miles on his indoor bike and rode outside whenever he was able.

By January — after having two rods and eight screws removed from his back in November, marking the end of his surgeries — he was ready to put all of that work to the test. He entered, and completed, the 100-mile Panaracer Texas Chainring Massacre. On March 16, he competed in the Land Run 100 in Stillwater, Oklahoma, finishing in 254th out of 1,053 racers with a time of 6 hours, 55 minutes, 54 seconds. He has since done one more race in Minnesota.

With three 100-mile races under his belt, he said he is regaining strength in his right leg and his back feels good. It's a far cry from where he was just months before his first 100-mile race.

"If you would have told me when I was in that nursing home that I would be riding the DK in less than two years, I would have never believed you," Brekke said.

Along with getting his body ready, Brekke said he has also spent the last few months researching and reading forums, figuring out what he needs to do to complete one of the most grueling tests in endurance sports.

He has had help in preparing from his friend, Charley Serrill, who rode in last year's Dirty Kanza 200. With backing from Nicollet Bike and Ski Shop in Mankato, Minnesota, he will get motivation during the race from another friend, Will Pass, and has John Shugart from Burlington running crew for him.

"There's definitely more to it than just me," Brekke said.

All that help, all his hard work and knowing how far he has come, Brekke said his goal for his first ride through the Flint Hills is to beat the sun. He said it's a high goal, but one he believes he can attain.

Whether or not he can reach that goal remains to be seen. Either way, he plans to soak up the experience and appreciate the opportunities before him.

"It definitely gives you more appreciation to be able to do a hobby you really enjoy," Brekke said of his accident and subsequent recovery. "It's crazy to think about just about being dead. They had to give me 17 or 18 units of blood. The body normally holds (8 to 12). It's definitely a miracle I'm here, and I don't take it for granted."

"It's definitely a miracle I'm here, and I don't take it for granted."