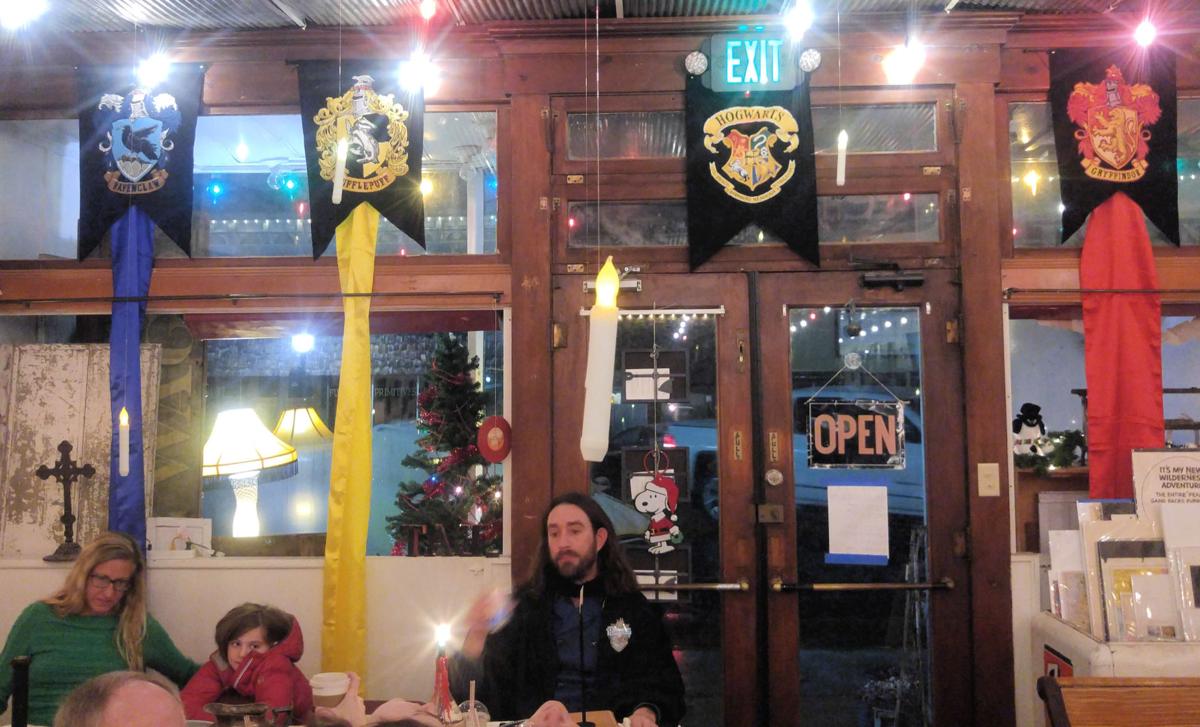 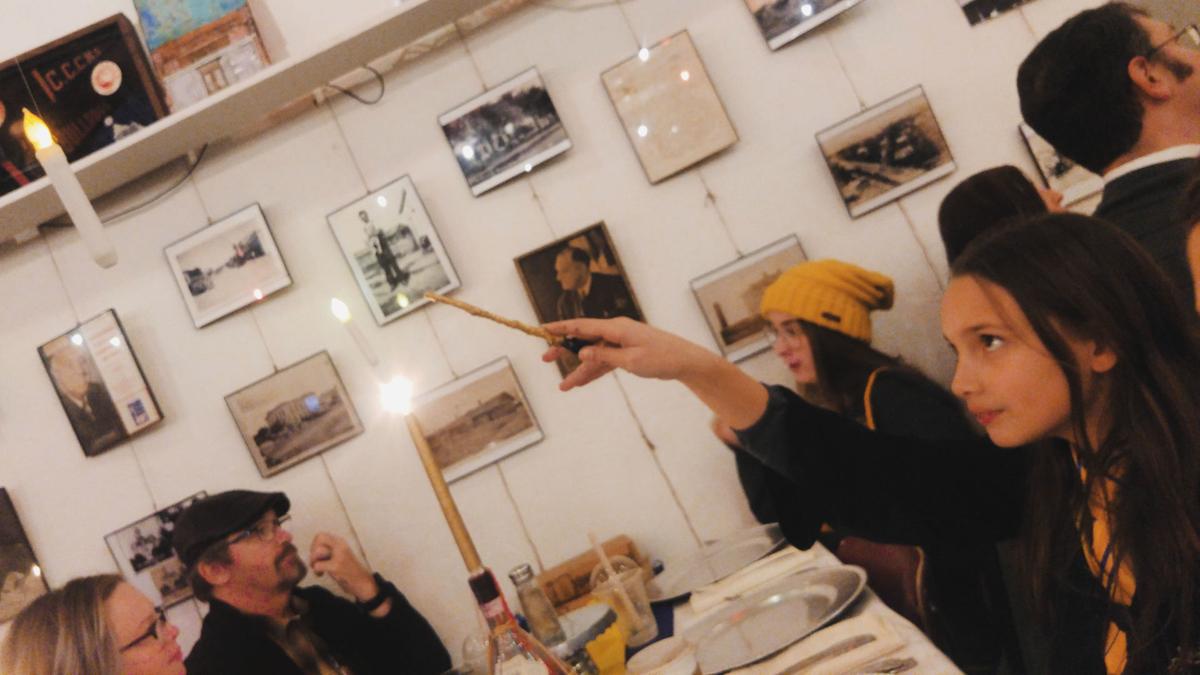 A young guest casts a spell on a candle during a Harry Potter-themed dinner at Keller Feed and Wine Co. in Cottonwood Falls. 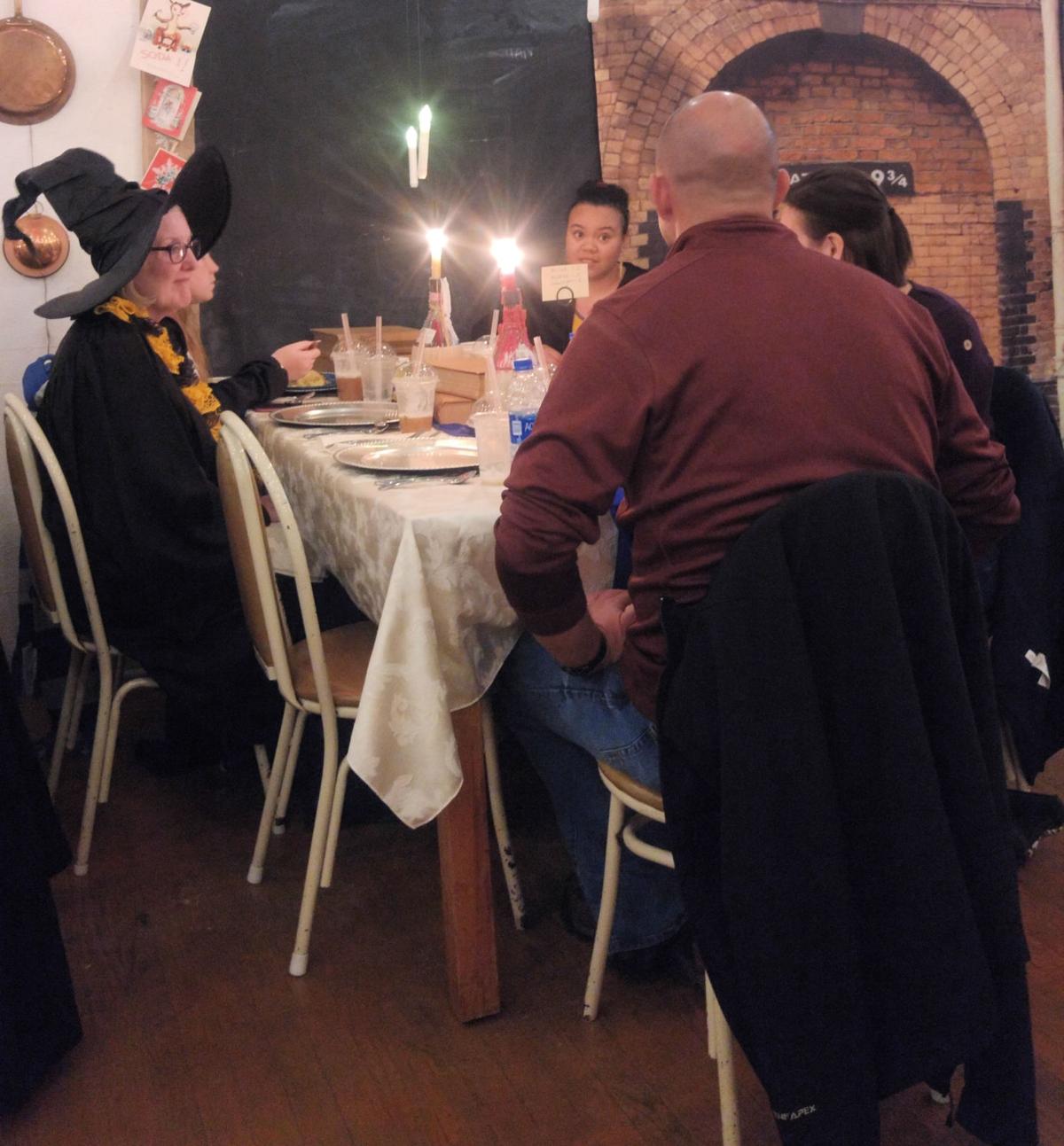 Many guests dressed in costumes to attend the Harry Potter-themed dinner at Keller Feed and Wine Co. in Cottonwood Falls.

A young guest casts a spell on a candle during a Harry Potter-themed dinner at Keller Feed and Wine Co. in Cottonwood Falls.

Many guests dressed in costumes to attend the Harry Potter-themed dinner at Keller Feed and Wine Co. in Cottonwood Falls.

It was a magical evening at Keller Feed and Wine Company in Cottonwood Falls on Sunday.

For the second year, the restaurant hosted special dinners inspired by those described in JK Rowling’s Harry Potter series.

Co-owner Bryan Williams said the popularity of the event caught him by surprise when it was first offered last year.

“We started this last Christmas as a one-off, something local for the kids to do over the break,” he said. “The first dinner sold out in 15 minutes, so we decided to offer a second dinner, which sold out almost as fast. We ended up doing five of them the first time around.”

What was meant to be an event for kids turned into a must-do for people who grew up reading Harry Potter.

“We made these tiny little menus with kid-sized portions, then about 80 percent of the people who came were over 30,” Williams said. “It started as this kids’ dining experience and it went somewhere totally different. It was awesome. You’re at a table with a bunch of strangers, but you all love Harry Potter, by the end of the night people are yelling out spells; it’s always a good time.”

The scene on Sunday evening included “floating” candles above the tables and banners from the four Hogwarts houses adorning the walls. A Platform 9 ¾ backdrop was the perfect place for selfies.

Co-owner Janice Williams played the role of host, announcing each course and asking diners which spells they knew and which brooms they used to get there.

“It’s not completely immersive, but we try to have fun with it,” Bryan Williams said.

The menu varies for each event. This year Drew Bonnet, Keller Feed and Wine’s head cook, came up with a four-course meal featuring Petunia Dursley’s Wilting Salad, The Leaky Cauldron’s Steak and Stout Pie, Smoked Arachnid Balls (porcupine-style meatballs made with black rice) served over truffled mashers and topped with a smoked pan gravy, with The Hog’s Head’s Butterbeer Creme Brulee accompanied by one of Hermione’s Chocolate Frogs for dessert. Butterbeer, butterbeer hot chocolate, and butterbeer floats were also available.

Bonnet, a culinary student at Flint Hills Technical College and the reigning champion of FHTC’s culinary competition The Cut, enjoys getting creative with the theme menu, Bryan Williams said.

“Drew is awesome at creating the menus,” he said. “He’s a Potterhead, so he gets it. He loves the drama of it, he loves the theme. He’s a great culinary mind.”

The popularity of the Harry Potter-themed dinners is good news for the local economy, too. Keller Feed and Wine Co. hosted two dinners in October in addition to the two dates in December, all of which sold out, with many guests driving an hour or more to attend. As a result, accommodations in the area were also completely booked.

“At least 90 percent of the people who bought tickets to our December dinners are coming from an hour or an hour-and-a-half away,” Bryan Williams said. “I just got off the phone with a woman who said she had to book a hotel room in Emporia because Cottonwood Falls is all booked up.”

People are making a mini-vacation of it, coming for the dinner but also visiting the antique stores and sights in Cottonwood Falls and exploring the Tallgrass Prairie.

“It’s so neat that this is helping tourism,” Bryan Williams said. “It’s helping the economy in our little town.”

What’s next for this popular attraction? Williams has an idea.

“Our dream is to take Harry Potter outside, I think that would be a blast,” he said.

“It's so neat that this is helping tourism. It's helping the economy in our little town.”