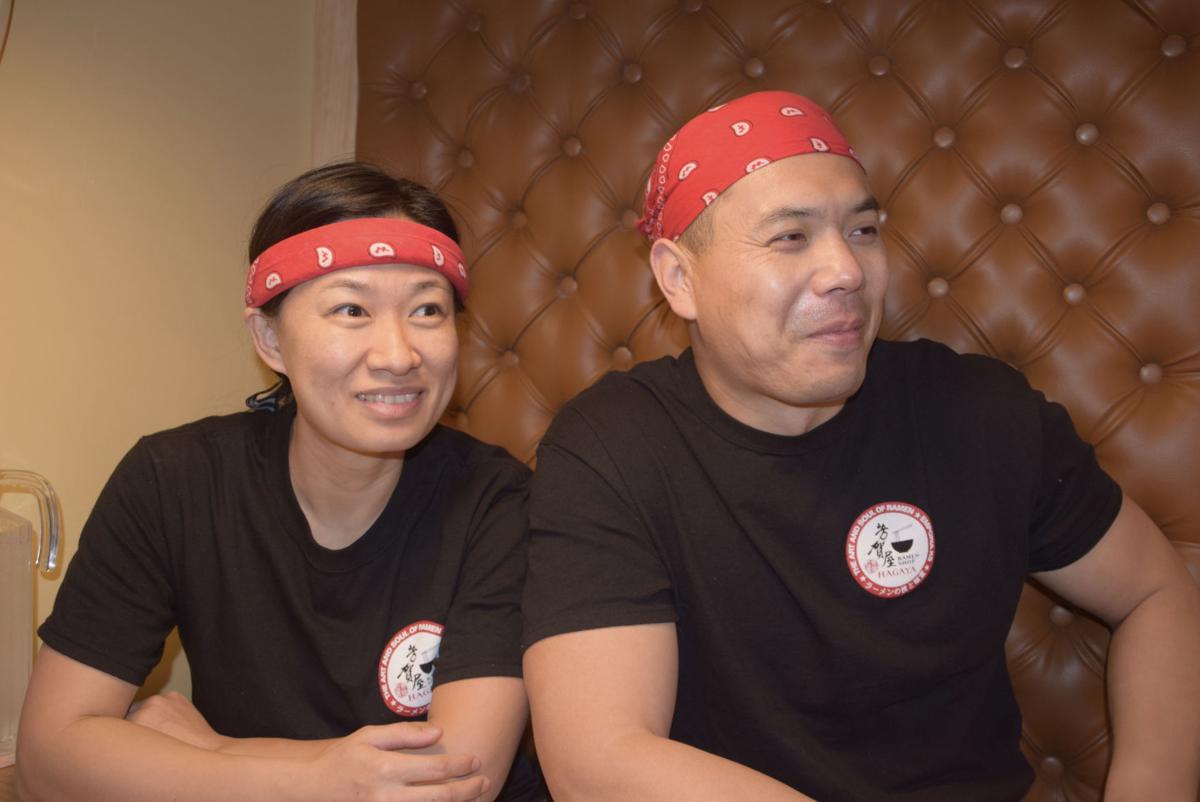 Erin and Jin Chai own the Hagaya Ramen Shop. 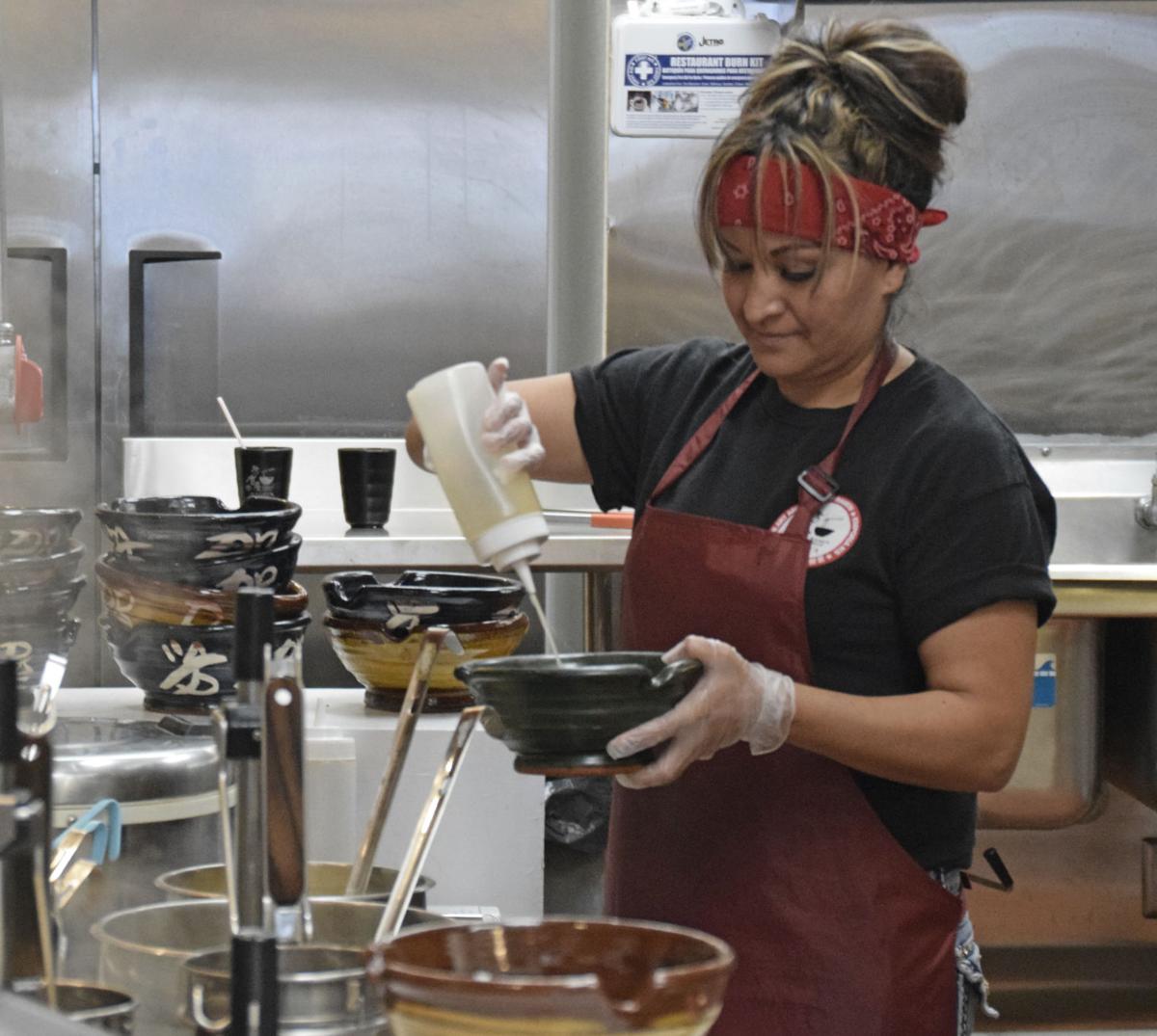 Gabriela Arvizu serves up a dish at Hagaya Ramen Shop. 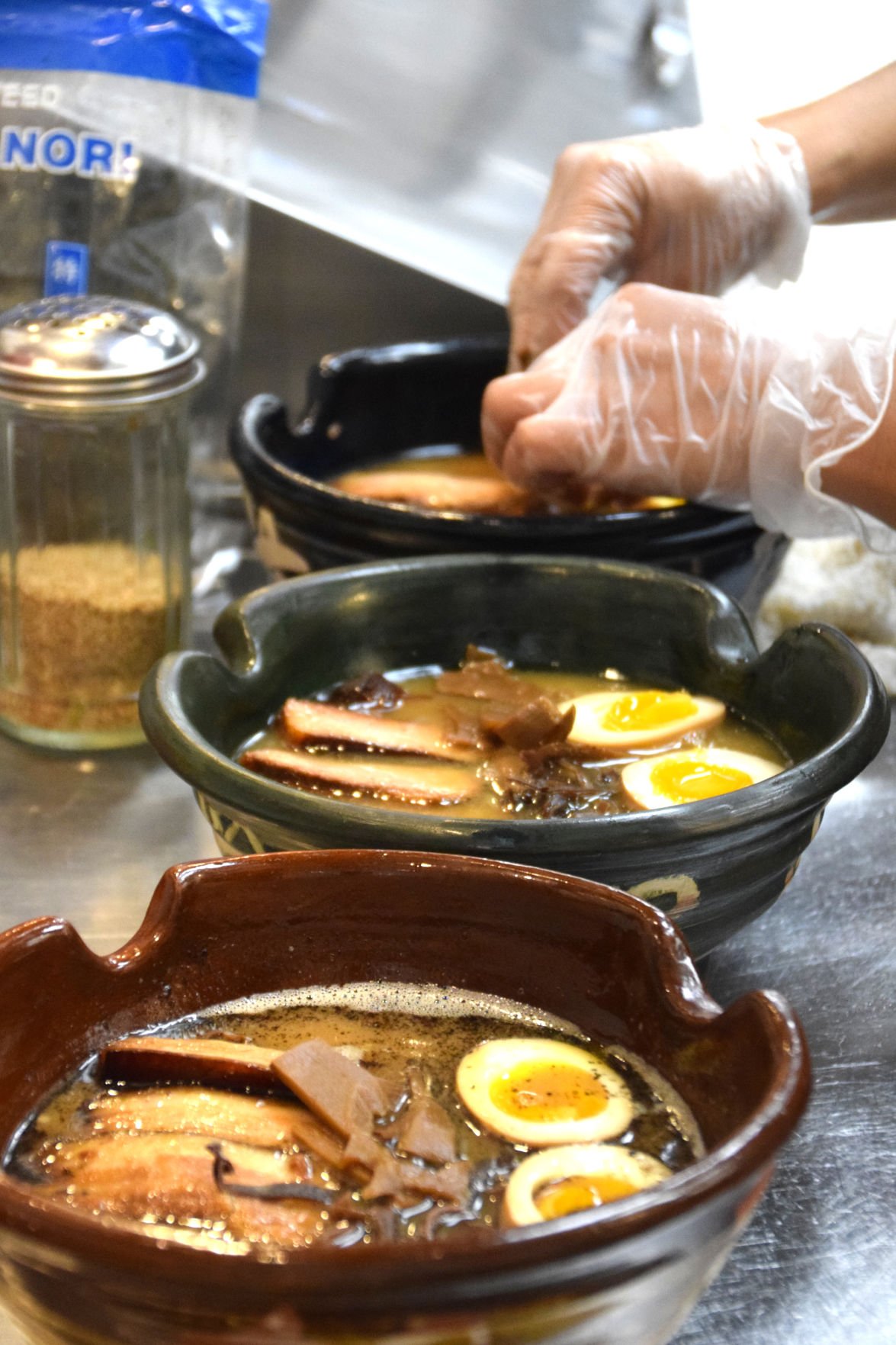 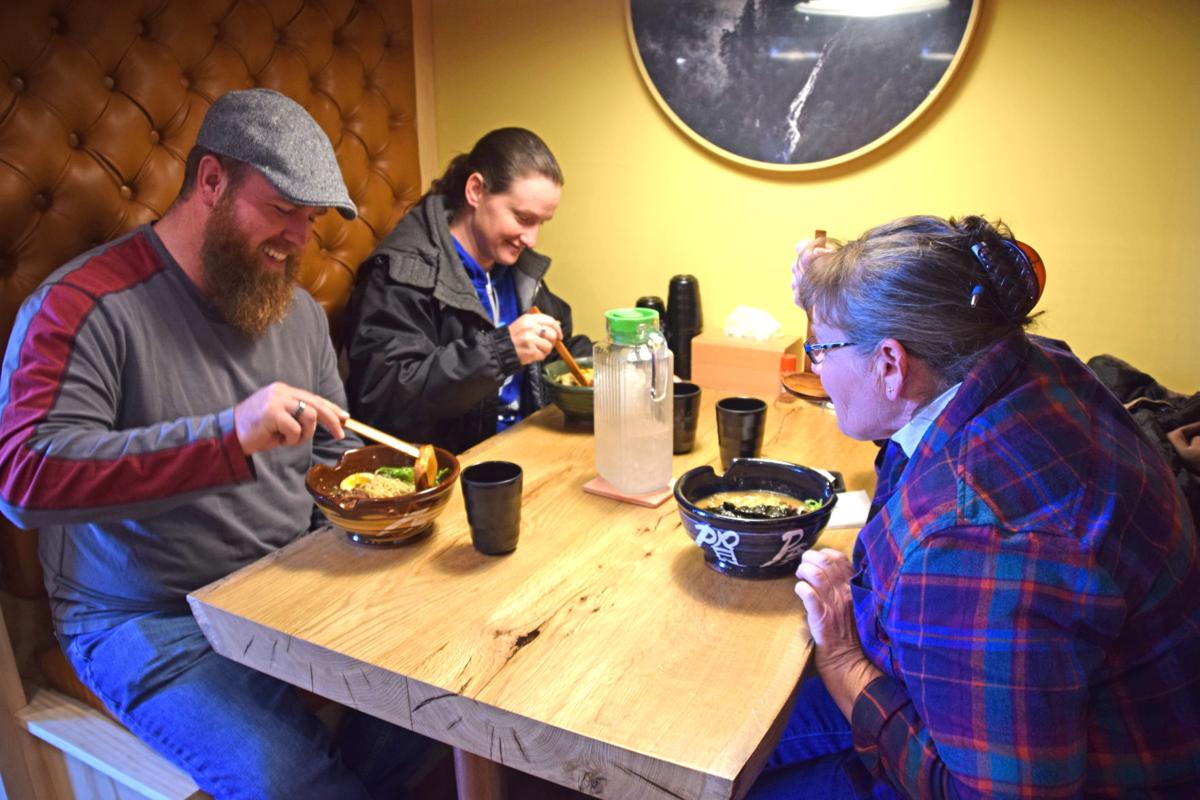 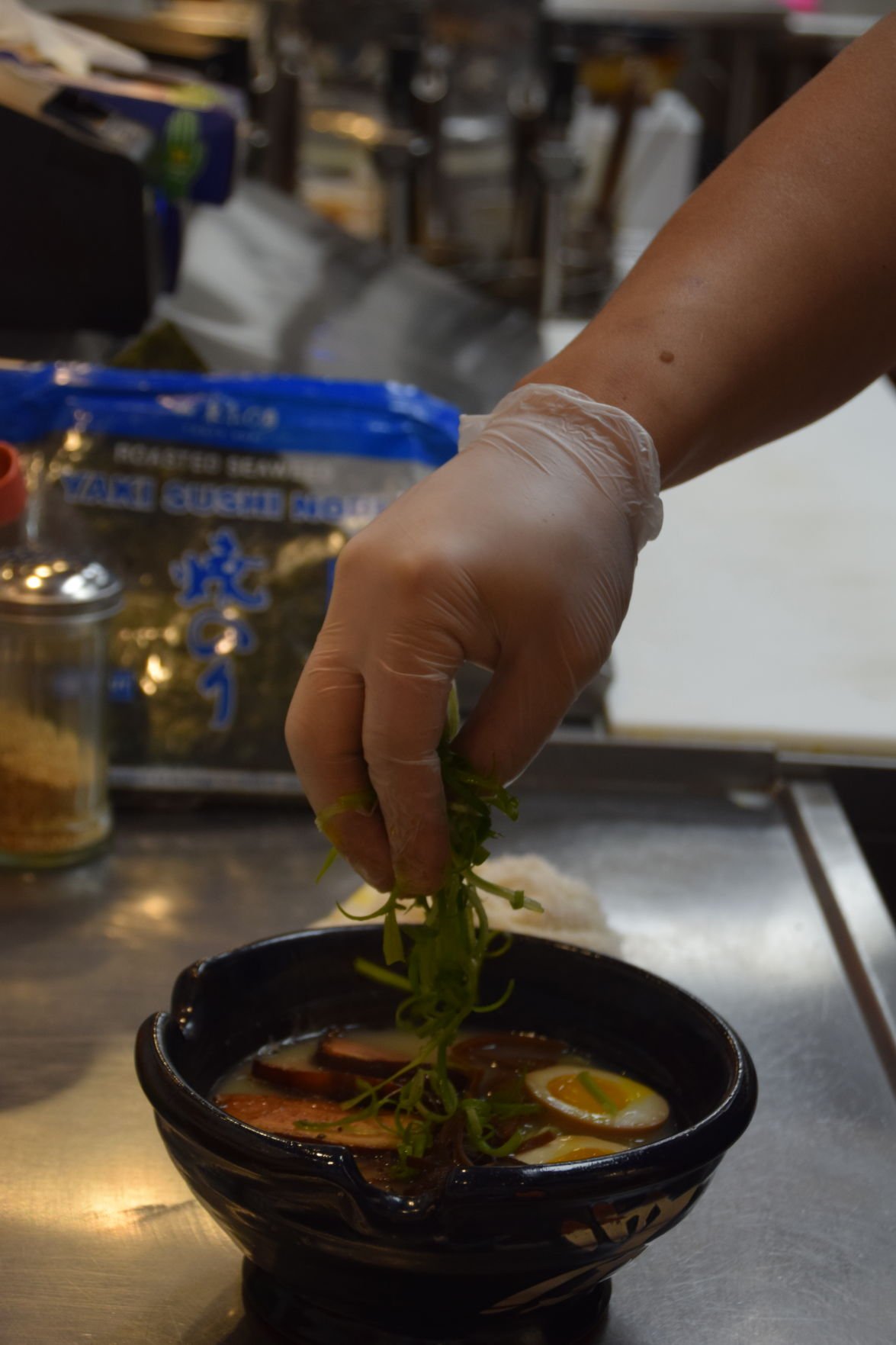 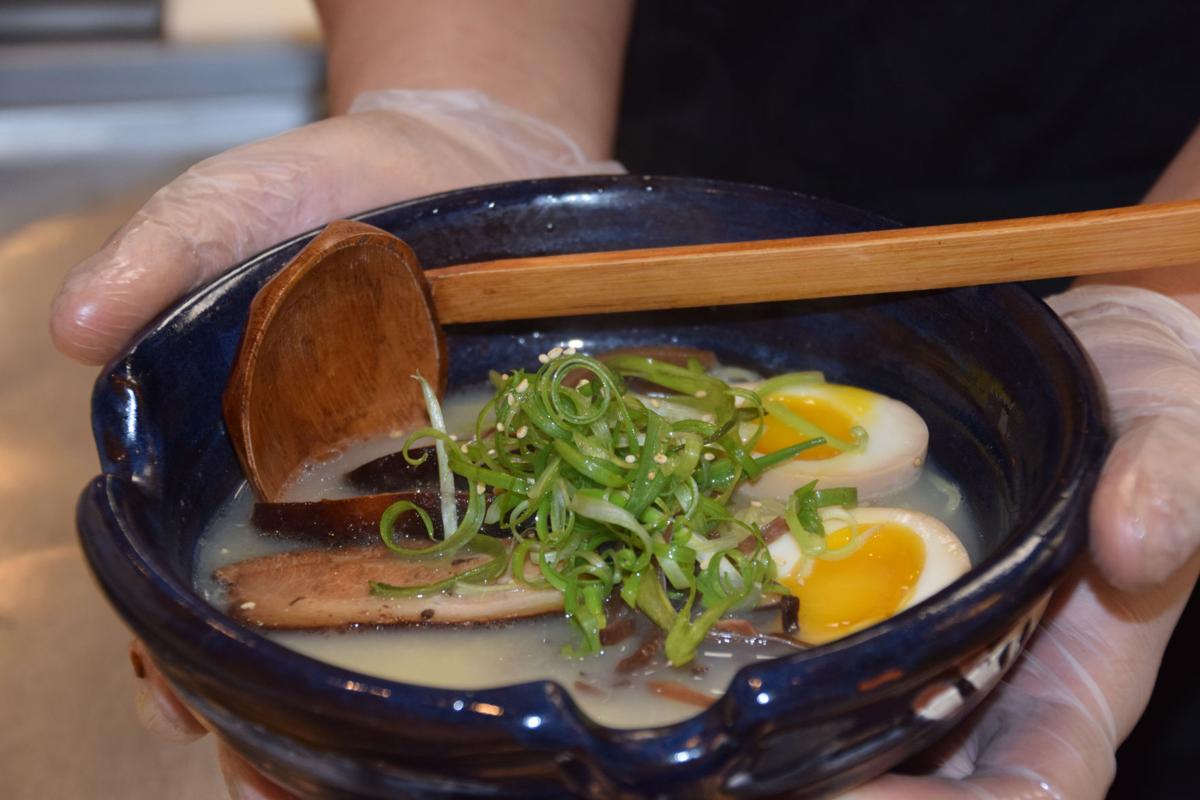 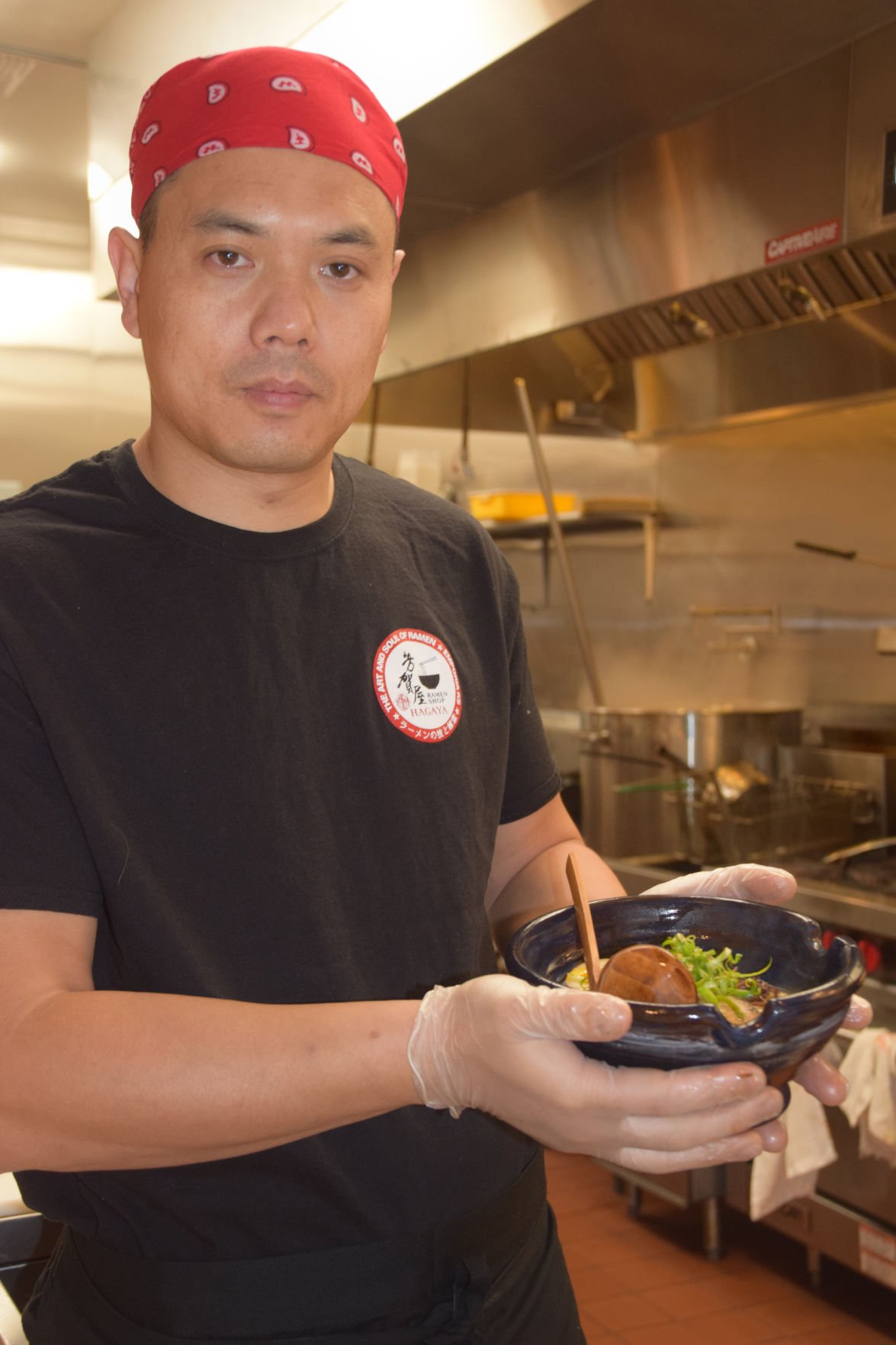 Jin Chai after completing a dish. 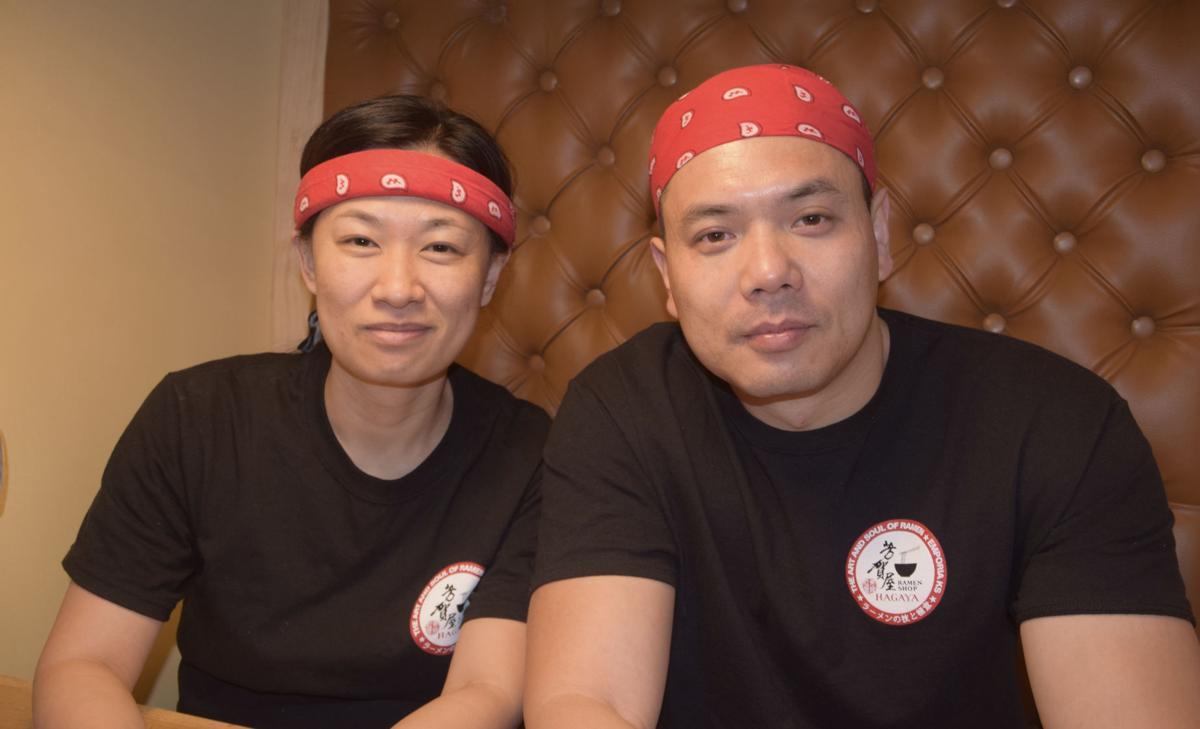 Erin and Jin Chai are owners of Hagaya Ramen Shop.

Erin and Jin Chai own the Hagaya Ramen Shop.

Gabriela Arvizu serves up a dish at Hagaya Ramen Shop.

Jin Chai after completing a dish.

Erin and Jin Chai are owners of Hagaya Ramen Shop.

Emporians Jin and Erin Chai, along with their daughter Genesis, have brought the city another culinary treat: Hagaya Ramen Shop.

Proprietors of Shangri-La Sushi (est. 2014), the Chais have been hard at work for almost three years to bring Hagaya to life in the 1100 block of Commercial Street.

More than just soup, and definitely more than the dried noodle packets in the store, ramen is a staple of the Japanese diet (and in variations in other Asian cultures). It is made from highly-nutritious bone broths and combinations of pork, egg and vegetables, all served over noodles.

“The first one means like a pleasant fragrance, and also beauty,” she said.

“The second one is like ‘celebration’ or ‘congratulations;’ the very last one means house. So, all together, it means a lot in Asian culture, but it is very hard to translate into English. It has many meanings.”

The symbols for Hagaya are used on the restaurant’s logo and the ceramic ramen bowls handmade by local artist David Mai.

Jin Chai had plenty of sushi chef experience, but little in what is called “line cooking” or “kitchen cooking.” While in New York City, he explored opportunities to expand his skill; it would make him a better restaurant owner when he was ready.

“I had more sushi experience than kitchen experience, and so I found a job in Manhattan, New York, at a Japanese restaurant,” Jin Chai said. “After I (went) there, (I learned) they are a ramen shop. JIN Ramen.”

“It was a busy restaurant near Broadway, and the speed of service was a new experience,” Jin Chai said.

“When you get a ticket, you should have it ready in five minutes. Just the noodles cook two minutes and 30 seconds. It is very fast.”

At one point, Chef Jin had his technique down to three minutes and 30 seconds.

Jin Chai kept ramen in the back of his mind as he looked for and found a home to start his own business: Emporia. Shangri-La was a unique addition to town, with dozens of different kinds of sushi and sashimi, Bento boxes, a house-made teriyaki.

As the Chais traveled across America and back to the orient, they ate ramen everywhere that could be found. Experiencing many different locales and styles helped Jin Chai decide on what size restaurant would be good, how it should be arranged, how many people should be in the kitchen, how many servers he might need.

In early 2017, Jin Chai closed Shangri-La for three weeks and flew to Tokyo to study and train.

“They basically teach you how to do business, but Jin already knew that part,” Erin Chai said. “They also tell you how to assemble the ramen, the base flavors, how to make noodles. But for the final flavor, for the real flavor, you must find for yourself.”

“In China they have an old way of saying, ‘you are hungry, I give you a fish, you still hungry’” Jin Chai said. “But I teach you to fish, you feed yourself.

“One hundred students can go there, and (if) they come out with the same recipe, that’s no good. The master, Mr. Fuji, he teaches you how to start, how to find your way.”

Hagaya is the beginning of Jin Chai’s ramen adventure.

What does one look for in a true ramen shop? The broth is made in-house, from bones, simmered for hours, perhaps half-a-day or more. The noodles are made fresh and cooked to order. The noodles are topped with a slice of lean, marinated pork belly and a halved, soft-boiled egg.

There will be other flavorings, too, from mushrooms, green onions and more that bring variety. A little house-made kim chee can add some extra flavors.

“Ramen, it’s maybe high-dollar now, but it is really street food," Jin Chai said. "A construction worker, maybe he needs hot food, really fast, so he can get back to work. He needs protein, so pork and egg; he needs energy, so noodles; and he needs stay hydrated, so broth.”

The meals come out fast, but the preparation is extensive. The eggs have to be prepared a specific way, cooked a special way. The pork takes hours before it is ready for ramen. The broth takes even longer, simmering for eight to 13 hours, depending on the style.

Soft water is essential to the food.

“We have a water softener in the basement,” Jin said. “Our stock, you have to use soft water. We boil our noodles in the soft water, the eggs, the drinking water is even soft. I believe Emporia water is very good; but for this, it is filtered, it is softened and again filtered.”

The soft-boiled egg is the “party hat” on the bowl, brown outside from an especially-prepared marinade, firm whites with a mostly firm yolk. The eggs are halved and they float on their backs in the broth.

The egg yolks are perfectly centered. They have an air hole poked into one end to prevent a dimple in the white, and they are constantly swirled in the boiling water — more than six minutes — so that centrifugal force keeps the yolk in the center.

The pork belly is meaty and nicely seasoned, with a sweet edge.

“We tried three different companies for the pork belly,” Jin said. “But even this best one, I still have to cut 15 percent of the fat off. At least 10 percent, maybe sometimes 20 percent. Who likes fat?”

Working with whole pork belly is arduous. There’s a lot of trimming, because it is a visual element in the bowl. Jin Chai soaks it to pull out any “wild flavors.” Then it is seared in the pan, all sides, holding it in place by hand with a set of tongs.

“This part, you don’t like so much,” Jin Chai said. “I wear the long sleeves, and it’s hard. You sear this side for the color, then this side, then this side and this side. It takes a long time. If you do one, OK, but three or four? And you have to do it with your hands.”

Once it is seared, the chashu (pork) must marinate overnight and then cook, up to 11 or 12 hours.

“You must let the fats go out, and the flavors come in,” Jin said.

The broths begin with bones: either pork or chicken paired with fish. They are cooked down until all the nutrition, marrow and calcium possible is removed. The broth is the soul of the ramen bowl.

The tonkotsus are pork, miso is soybean paste and pork stock, shio and yuzu are chicken and fish and shoyu is chicken and a special soy sauce the chef makes by combining four specially brewed sauces.

“When you hear ‘soy sauce,’ it is not like what you think of soy sauce,” Jin Chai said. “You have dark sauce and light sauce, there are big companies in Japan that make this.”

The Chais taste-tested about 25 different products.

“We found four different kinds. Four.” Chef Jin said. “From this, we make our own for our Shoyu ramen.”

How does one eat ramen?

“However you want,” Chef Jin said. “Some use the chopsticks, some use the spoon and chopsticks. Some ask for forks.”

The noodles for each dish are the same. Ramen noodles can come in thicker and thinner styles, or different flours. Curly noodles are straight ones that have been wadded in the hand into a ball and then dropped in the water.

Jin Chai said as time goes by, the opportunity for different noodles may come forward. It takes a critical mass and customer loyalty to avoid costly additions to the menu.

“Like in sushi, I go maybe two months before someone asks for say, uni (sea urchin).” Jin said. "This is not the kind of food you can keep week after week; after a day, it has to be replaced and the cost is very high.”

The Chais have spent 33 months bringing 1111 Commercial St. to its current state, a complete remodel, with most of the work done by the couple.

“Obviously, the framing, these supports — that I cannot do,” Jin Chai said. “The plumbing, the electricity.”

However, he designed and executed the intricately-textured wood walls, the tufted upholstery and the shelf display of sake barrels. The Chais made their own sake barrel covers by hand, converting them from advertisements for breweries to a celebration of ramen.

“We want to make it nice,” Erin Chai said. “(We want) people to feel good in our place.”

“The decorations are secondary to the food,“ Jin said. “The food must come first. We will try our best to care for the people.”

“The food must come first. We will try our best to care for the people.”

I hope the Chais look into being able to offer a low carb noodle for those of us who are diabetic. Sounds like a great idea for any restaurant, really.

Welcome another business to Emporia. May this Ramen shop stay forever and do very well. I've seen many programs on Food TV about Ramen and look forward to tasting this.