Members of the Black Student Union at ESU raise their fists in solidarity after a step performance during the National Day of Racial Healing celebration in Webb Hall. 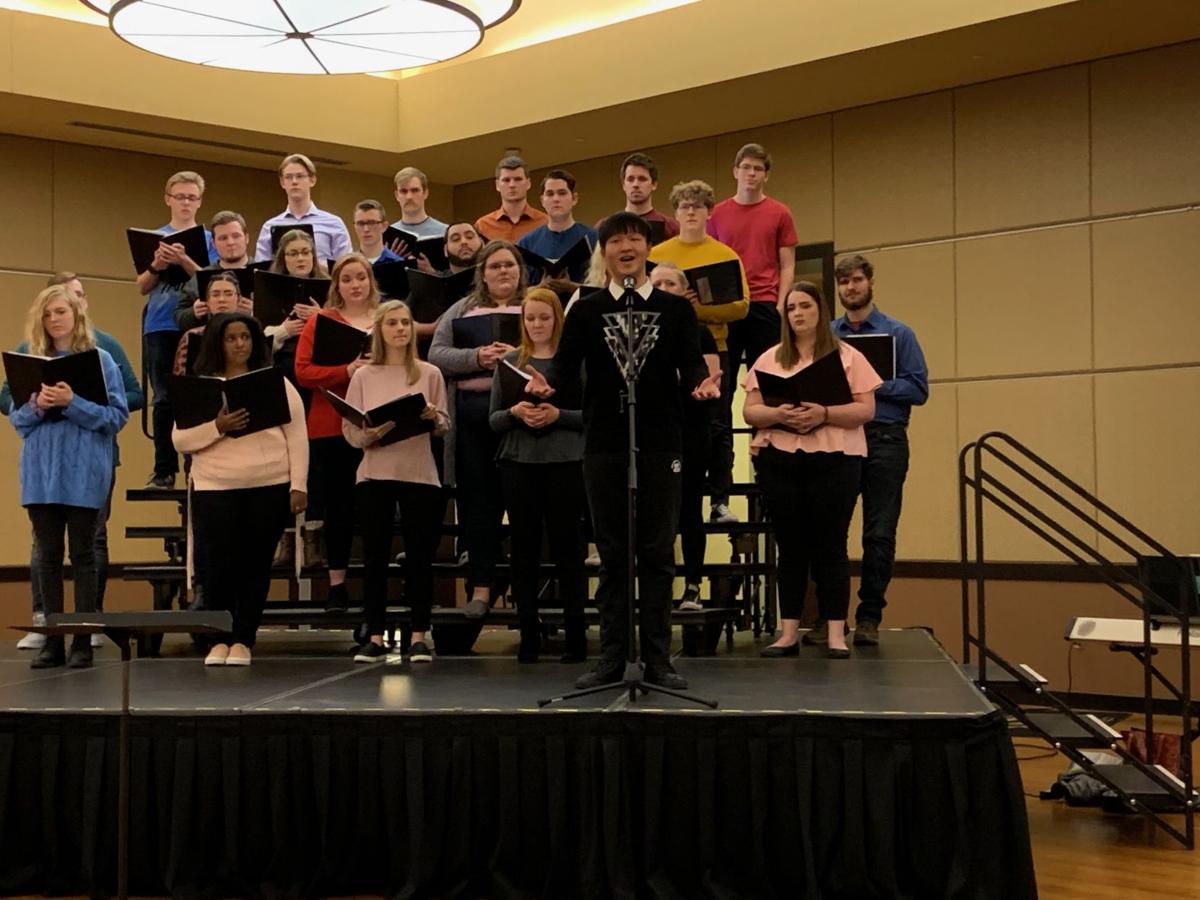 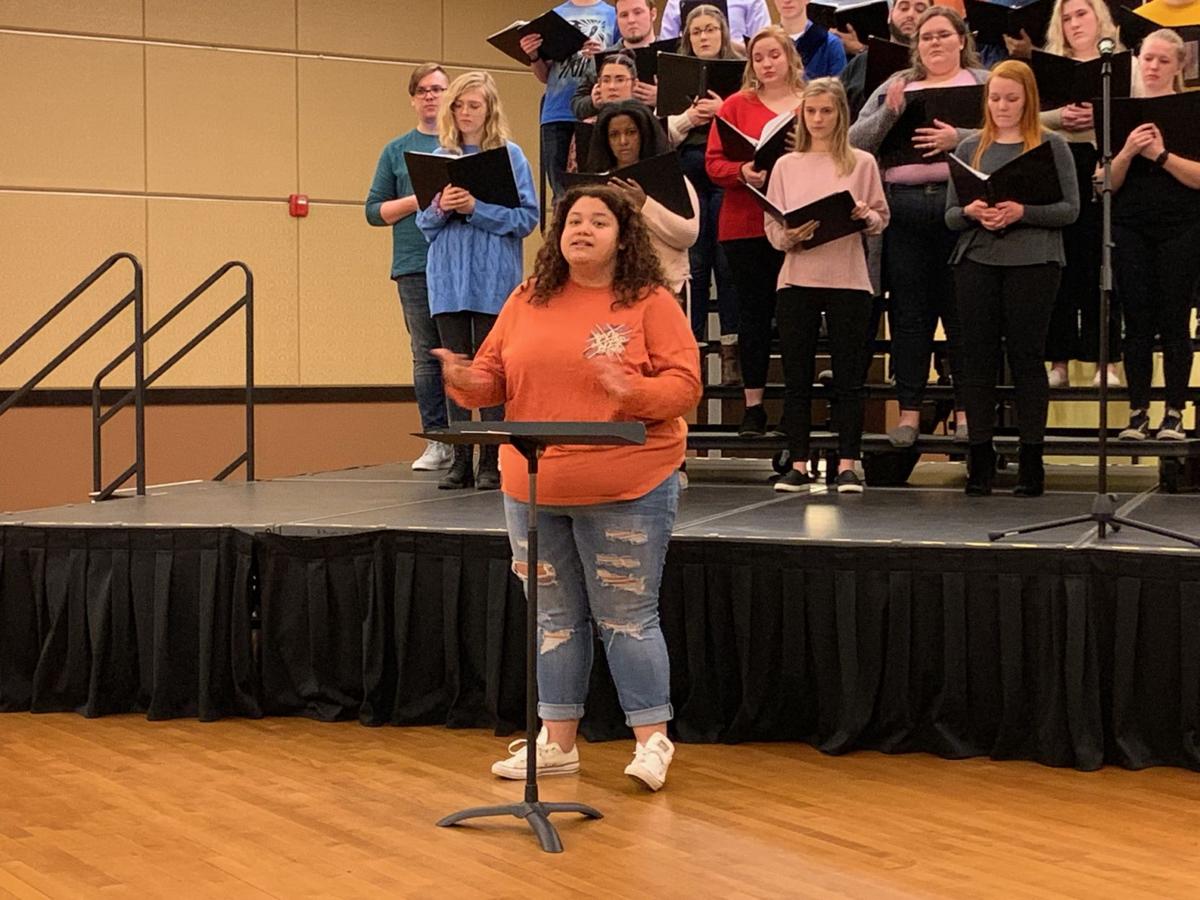 Madeline Alford gives her first-hand account of a racially-charged incident that happened on the ESU campus in 2018. 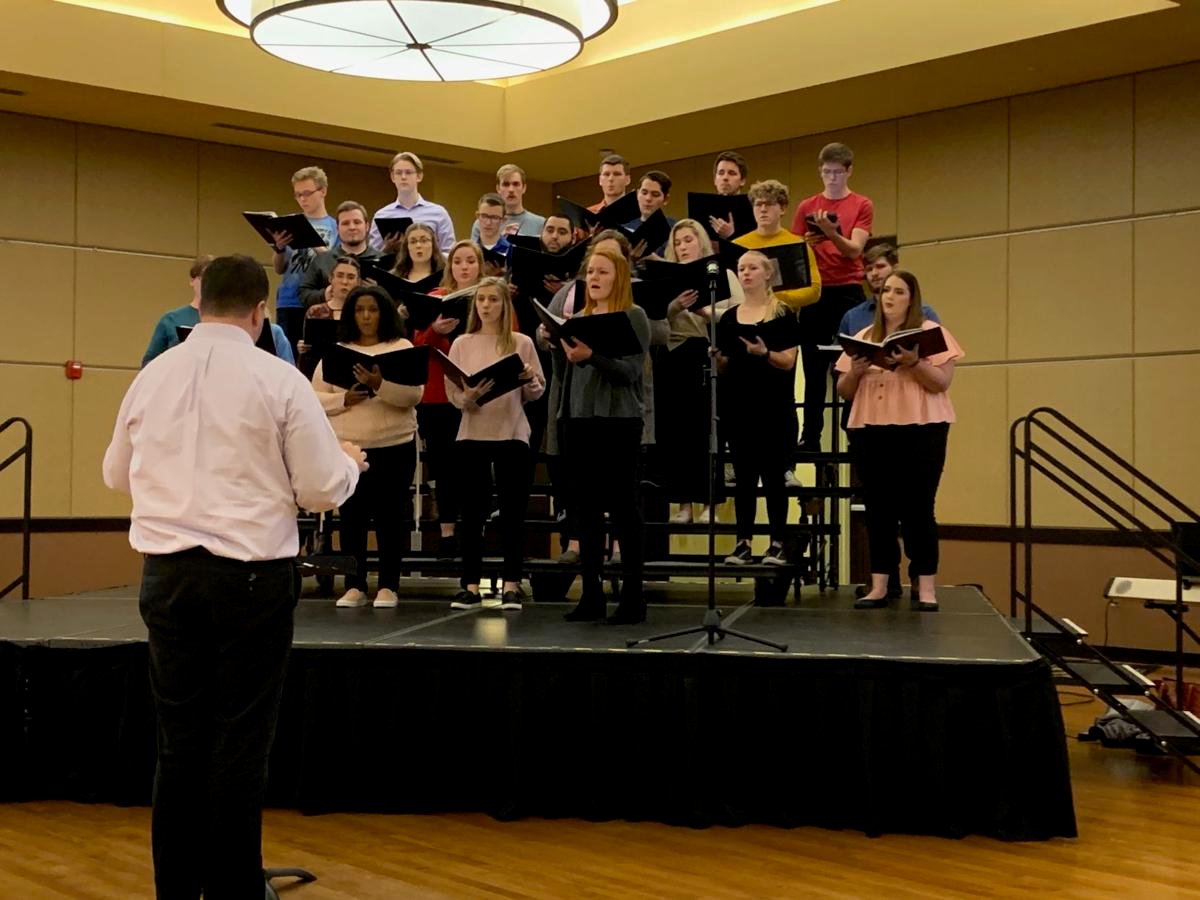 ESU Director of Choral Activities Rob Ward directs the Tallgrass Chamber Chorale during a celebration for the National Day of Racial Healing Tuesday on campus.

Members of the Black Student Union at ESU raise their fists in solidarity after a step performance during the National Day of Racial Healing celebration in Webb Hall.

Madeline Alford gives her first-hand account of a racially-charged incident that happened on the ESU campus in 2018.

ESU Director of Choral Activities Rob Ward directs the Tallgrass Chamber Chorale during a celebration for the National Day of Racial Healing Tuesday on campus.

ESU Diversity Student Programs teamed up with the Department of Music for a showcase of music, spoken word and artistic performances to highlight the National Day of Racial Healing in Webb Hall. It was the first celebration of its kind at the university.

Teresa Taylor Williams is in her first year as Diversity Student Programs director at ESU. She said forming partnerships with other departments on campus as well as in the community have been a priority for her in her new role.

“One thing I was told by a very wise person was that you can’t do anything on your own, so I’m all about partnerships,” Williams said.

She said the National Day of Racial Healing was a great opportunity to team up with the music department.

Director of Choral Activities Rob Ward led the Tallgrass Chamber Chorale in singing several songs about unity. Performances included more traditional numbers along with modern hits such as “Glory” by Common and John Legend from the film “Selma.”

“I approached Teresa about wanting to do something with the (Diversity Student Program) with our chorale,” Ward said. “It’s nice to have those connections and to be able to have something that takes us outside of Beech Hall. She mentioned the National Day of Racial Healing, and that started the ball rolling.”

Along with the chorale, student Yihan Wang sang a traditional Chinese folk song. It was one of many pieces within the event which highlighted the many cultures both at ESU and globally.

“We wanted to bring Dr. King’s message to everyone,” Ward said. “Not just black and white Americans, but everyone on a global scale.”

The evening featured more than just music. The first speaker of the night was Madeline Alford from the ESU Black Student Union, who gave her emotional account of an event that happened on campus during the fall semester in 2018.

In Nov. 2018, the Associated Student Government’s Diversity and Inclusion Committee attempted to impeach then ASG Vice President Michaela Todd after she posted on Facebook using a term they felt was racially insensitive. Alford said while many — including a national audience on Fox & Friends — heard Todd’s side of the story, few were aware of the backlash received by those on the other side of the issue.

Alford said they received hate-filled and threatening messages and emails, to the point one of her friends attempted suicide. When she and her friends went to the police in a desperate search for their friend — whom they believed to be in great danger — they were asked if the situation on campus was “really that bad.”

“It was at that moment I realized that everything I do moving forward is going to hurt, but it’s going to make a difference.”

Throughout the event, videos were shown of King’s famous “I Have a Dream” speech along with a talk given by well-known Indian-American writer Anand Giridharadas.

Former Kansas Poet Laureate and chair of ESU’s Department of English, Modern Languages and Journalism Kevin Rabas recited two poems that fit the mood of the occasion. That preceded members of the Black Student Union giving a step performance while wearing shirts depicting the names of people killed due to racial violence.

The event ended with the song “All of Us,” from a performance the chorale gave last year titled, “Considering Matthew Shepard.” That show focused on LGBTQ issues in honor of the University of Wyoming student who was beaten, tortured and murdered in 1998 because he was gay.

“We wanted to represent every culture possible,” Ward said. “Each of them have their struggles, but we have to find empathy and a connection.”

The event, as a whole, was an opportunity for different departments on campus to team up and celebrate diversity. Those are two factors Williams hopes will play a role in creating a more inclusive environment.

“I want to do more together,” she said. “One of the things you see if you look around campus — we tend to be divided. I don’t mean that in a bad way, but we just seem to have so many little pockets of people. We’re too small of a campus to be divided. We should be unified, and that’s why being inclusive is such a big thing for me.”

"We wanted to represent every culture possible. Each of them have their struggles, but we have to find empathy and a connection."