Retired dentist Robert Harmon is challenging Rep. Eric Smith for the second election in a row. 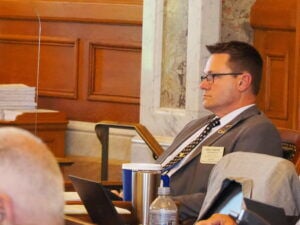 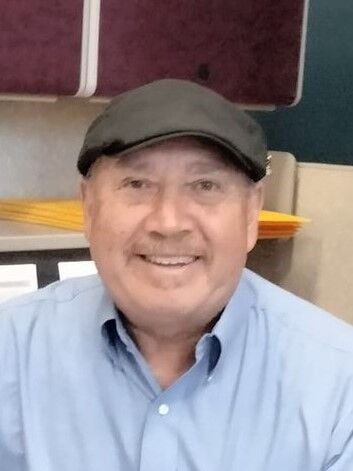 Retired dentist Robert Harmon is challenging Rep. Eric Smith for the second election in a row.

A local House member will face a familiar primary challenger this summer. That winner is likely to face a retired registered nurse in the fall.

“I don’t know how you can... get taxpayer money from being a legislator and an undersheriff,” Harmon said Friday.

Smith is a three-term lawmaker as well as Coffey County Undersheriff. Harmon suggested the two jobs are an ethics issue.

“Where are you going to serve?... Make up your mind,” Harmon said.

Harmon also challenged Smith in the 2020 Republican primary. Smith won by a 57% margin, or about 330 votes.

Harmon says a couple of votes by Smith since then concerned him.

“There was a bill that came up about allowing game wardens and officers to come on your property without permission and set up video cameras,” Harmon said. “Being a property owner, I didn’t feel like that was the right thing to do.”

Harmon said he also wants to improve the tax situation for businesses in Kansas.

Harmon cited his retirement from Harmon Dental as a strength. He wants to do more than “play with my beagle hounds,” fish and sport shoot.

“I feel I can do a better full-time job, than him trying to fill two positions,” Harmon said.

Whoever wins the Republican primary will face Democrat and first-time candidate Chuck Torres of Olpe.

“I’m not a politician,” Torres said Friday. “I think balance is important in the legislative process.”

Torres introduced himself with a news release Friday morning. His 45-year nursing career included time at Newman Regional Health. He also spent a year as an Emporia school bus driver.

“I want to take my service to the public,” Torres said. “There’s too much gridlock, which is damaging this state.”

Torres realized District 76 tends to be Republican red, but he says he wants to put the people first, especially promoting the needs of rural areas.

“My main purpose is to serve the people of the 76th District, regardless of whether they’re Republican, Democratic, independent or any other party,” Torres said.

In District 13, which now includes Chase County and part of Lyon County, incumbent Rep. Joe Newland, R-Neodesha, had no opposition as the noon filing deadline approached.

The Libertarian Party has filed a slate of candidates, but none of them are in the Emporia area.

Candidates can file after the Friday deadline, but must do so as independents by submitting petitions. The deadline for them to enter the general election is Monday, August 1, one day before the primary.

I want to thank the Emporia Gazette for their coverage of this important election topic. I am new to this process. It was my expectation that the press release developed would be printed in full. Instead, I received a phone call from Richard, which I was very thankful for, and was asked questions. I referred him to the press release and also attempted to answer his questions. I would like to provide the press release in full for your review.

Following a 45 year career in nursing service, first as a nursing assistant and later becoming a Registered Nurse, Torres hopes to continue his service to the citizens in the 76th district as a public servant in the state legislature. He believes balance is important in the legislative process and current partisan gridlock is damaging our state. Rural communities’ needs are being ignored by current legislative leadership. It’s time for the people of the 76th district to have a new choice in representation who will stand up for the needs of the 76th district.

Torres’ goal is to serve the citizens and needs of the 76th district. Schools are the heart and soul of each community throughout the district. Torres will fight to maintain full education funding for our schools and ensure that smaller rural districts can continue to provide robust educational offerings. He supports expanding Medicaid, which would provide affordable health insurance, stimulate the Kansas economy by injecting billions of dollars, create thousands of new jobs and retain health care jobs and hospitals in the 76th district. Torres will support family farmers and ranchers whose needs are being overshadowed by corporate farming interests. Torres will be a voice in the legislature for the family farmers and ranchers throughout the district. Rural population decline will also be a top priority. Economic development and strategies to retain our young people must be addressed. Torres will work with local leaders to expand job opportunities to our communities.

Torres, the son of Ernesto and Jeannine Torres and one of seven siblings, was born and raised in Emporia. He attended St. Catherine’s and Sacred Heart grade schools, Lowther Jr. High, and Emporia High School, graduating in 1975. He attended Emporia State University, Newman Hospital School of Nursing and Pittsburg State University. He graduated from Pittsburg State with a Bachelor’s of Science in Nursing degree in 1979. He has worked at Newman Regional Health, Mt. Carmel Medical Center in Pittsburg, KS, Shawnee Mission Medical Center in Johnson County Kansas for over 20 years, Mid-America Cardiology at St. Luke’s and KU Med, Tyson Fresh Meats/Employee Health, Flinthills Community Health Center/Clinic Manager, Goodyear Tire and Rubber/Employee Health-Topeka, Angels Home Health Care and At Home Health Care. He was also a bus driver for the Emporia School district for 1 year.

Torres is married to Lori Torres, also a Registered Nurse. They have resided in Olpe for 20 years. They celebrate forty-two years of marriage and have three children: Matthew Torres of Lawrence, KS, Melissa Tastove of Cottonwood Falls, KS and Emily Torres of Emporia. Chuck and Lori also have two grandchildren, Jack and Noah Tastove.

After watching last night's initial hearing of the House of Representative's committee investigating the attack on the nation's Capitol, my main concern with any candidate is whether or not the support the Constitution and will hold the former president and his acolytes (including his supporters at the state level) accountable for instigating the attempted overthrown of our government.