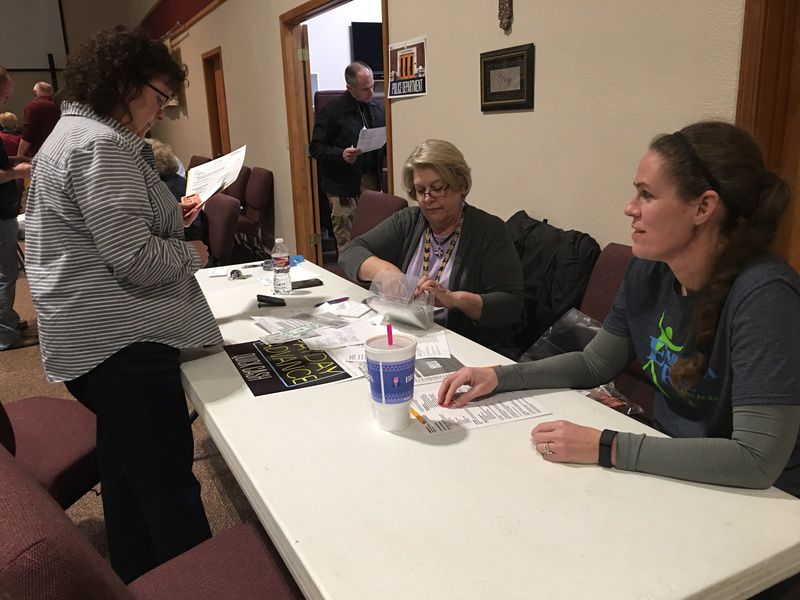 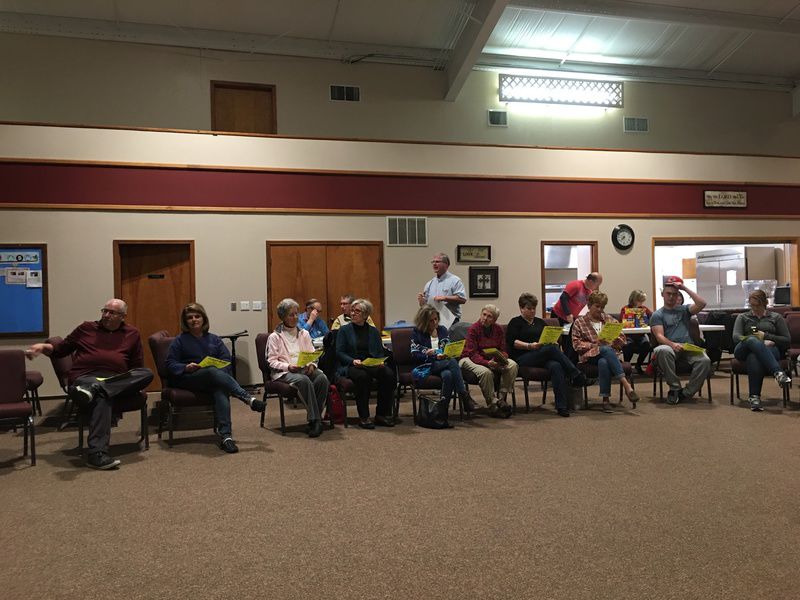 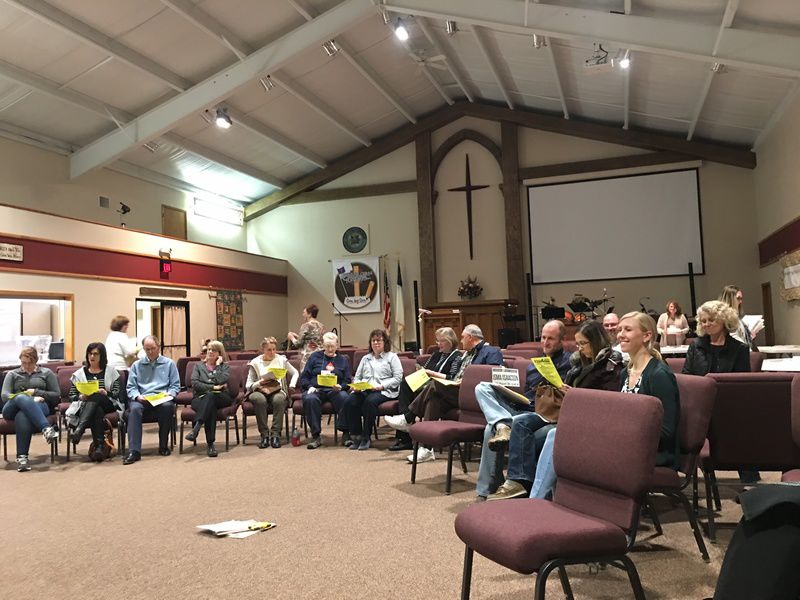 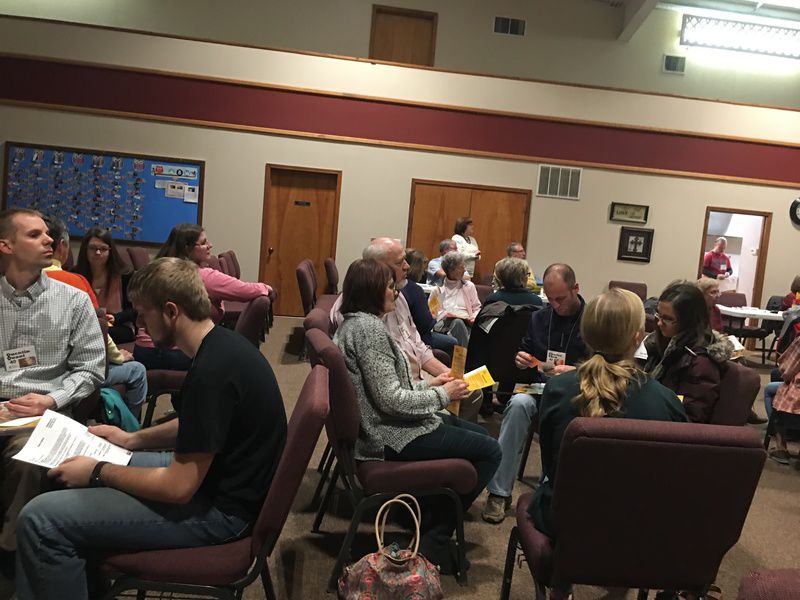 Ryann Brooks/Gazette“Families” wait for the start of a new week during Thursday evening’s poverty simulation.

Ryann Brooks/Gazette“Families” wait for the start of a new week during Thursday evening’s poverty simulation.

More than 40 people participated in a poverty simulation sponsored by Family Promise of the Flint Hills at the First Baptist Church Thursday evening.

The simulation, designed by the Missouri Community Action Network, has participants role-playing in family groups as they try to navigate a month living in poverty. The month consisted of four, 15-minute weeks, where families dealt with issues like incarceration of a parent, homelessness, unemployment and teen pregnancy.

Participants role-played all ages. While children went to school or day care, adults had to go to work and obtain assistance, buy groceries, pay rent and utilities, and other household expenses.

Unfortunately, it wasn’t always that easy. Families faced eviction, utility shut-offs and having their children taken away for neglect or lack of resources. Trips to each service required transportation tickets, which represented walking time, gas usage or bus fare. Predatory individuals offering quick cash for selling stolen items or drugs also milled around the room. For many families, that seemed like a short-term solution to a long-term problem.

Bev Long, secretary of the leadership committee, acted as the day manager of the homeless shelter and said she saw a lot of the same emotions from participants as they tried to navigate through the simulation.

“I saw frustration, I saw fear,” Long said. “I saw people who are totally unaware of what resources are available and how to obtain them. Then you see people who kind of have a light bulb come on like, ‘Oh my God, now I know why so-and-so is going through this situation or why it’s not getting better.’”

Long said one family that came to the shelter qualified for assistance, but the shelter was unable to allow the teenage son’s pregnant girlfriend to stay with them without calling child protective services.

“I told them because she’s a juvenile and she’s not with her family, I’d have to call CPS and she’d be a child in need of care,” Long said. “The family could sign guardianship over to them, but the courts won’t approve it because they don’t have stable housing. They were like, ‘Wow.’ That’s the reality of it. Folks in poverty know their situation and they’re dealing with the day. They’re not looking past it because they don’t always have resources or the knowledge of resources. They’re just dealing with their situation.”

Rob Catlett, one of the participants, said many of the perceptions he had about poverty beforehand were reinforced during Thursday’s simulation.

“People who are in poverty are often times struggling with transportation and other kinds of things, so they have to hurry from one place to another to pay their bills when they don’t have reliable transportation,” he said. “I will never forget about it.”

Catlett said he had participated in a poverty simulation before, though his roles differed each time.

“This experience was a super positive experience,” he said. “It’s really cool being able to play characters. This time I was a 16-year-old pregnant woman and my boyfriend was there, so we were trying to hang out quite a bit. For an older economist that’s sometimes a bit of a challenge, but sometimes we forget about the dire circumstances people face when they’re in poverty.”

Catlett said, overall, the simulation reinforced his belief that poverty does not have to exist in today’s society.

“We don’t have to have poverty,” Catlett said. “President (John) Kennedy’s inaugural speech said we’ve got the power to destroy the Earth, which means we’ve also got the power to eliminate poverty. We’ve got one of the most affluent societies on the planet and we still struggle with poverty, and that’s inexcusable from my perspective.”

ECKAN Human Services Coordinator Julia Wilson, who moderated the event, told participants that more than 6,300 Emporians currently live in poverty. With a population of just less than 25,000, that amounts to a 25.5 percent poverty level in the city. Wilson said last week 16 homeless people came to her office seeking assistance. That, she said, was reason enough to keep pushing for anti-poverty programs.

“We can’t just give up on anti-poverty efforts,” she said. “It can be the easy way out to say we’ve been offering food assistance for so long and now so many people depend on it, and they’re just not motivated. I just don’t think that’s the case. It’s not individual decisions that create poverty. It’s time to take a step back and think about how we can change our approach and keep trying.”

Heather Wagner, student and family resource specialist for Emporia Public Schools, said she felt the simulation was a good way to open people’s eyes to what many students in the district are facing every day.

“I think this simulation is very good for our community to really experience what happens to these families,” Wagner said. “You know, with the children coming to school, they’re trying to focus on your homework and getting those things done, but you may be hungry and wondering what’s going on at home. When you get home all of the things that encompass that family and what they’re trying to do to be successful makes it very difficult.”

Wagner encouraged families who may be struggling to reach out for help and to see what resources might be available to them.

“This is a great community and there’s so many giving and wonderful people who want to donate or be a part and just help out,” she said. “So don’t hesitate to just ask someone, anyone, and they will help you find the right person to talk to. If it’s a student at school, talk to your counselor, talk to your principal, talk to your school nurse, and they can definitely find the right person to help. If it’s a parent, same thing; just ask someone in that school and they can point you in the right direction for resources.”

Family Promise of the Flint Hills is still seeking host sites for its community-based homeless shelter. For more information about how to get involved, email familypromiseoftheflinthills@gmail.com.

Low income families and those living below the poverty face one of their greatest obstacles on a generally accepted non-issue... energy! The fact of the matter is low income families can spend as much as 20% of their total income on their energy needs (heating of homes, cooking, electricity and transportation). By subsidizing alternative energy sources, electric costs alone have risen from $0.106 per Kwh to $0.1306 per Kwh in the past five years. That is about a 25% increase in energy costs. If you are spending 20% of your income on energy and it increases by 25%, that is a huge hurdle for lower income families to overcome. In fact, one of the primary reasons lower income families call charities and religious organizations for assistance is for help with paying their energy bills.

Most people think if you make less money, then you would spend less on energy, but that is not the case. Lower income families have older cars that use more gasoline, the same distance to drive to work, older homes that are less insulated, older furnaces, older appliances and over all they tend to consume per capita the same energy as middle-income families.

If we truly care about helping lower income families, we should not only strive to understand how pregnancy, incarceration and like impact their lives. Those only impact some lower income families. We need to look at how energy costs impact the poor, and strive to find ways to provide cheap, reliable energy for those families to give them the best opportunity to advance. I hope this was addressed in this forum, because it is not being discussed on a larger scale. There are many costs to climate-change, but their are also costs to addressing climate which tend to increase energy costs and adversely and disproportionately impact low income families.