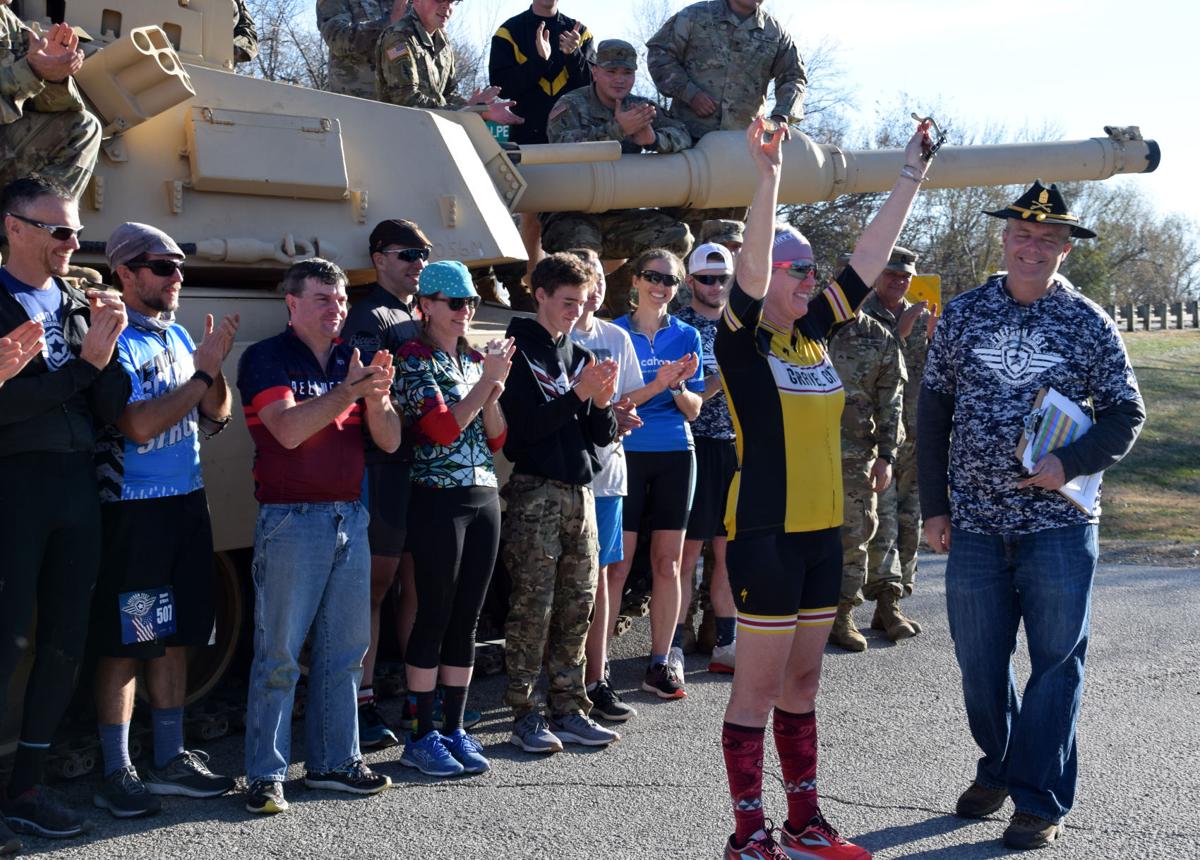 Lyn Bazil-Blubaugh receives a medal from Steve Harmon for having guts, along with her 5th Golden Spur. She was recognized for completing the long, three-part Spur challenge while undergoing chemotherapy for cancer. She was determined to get another spur at this year’s event. 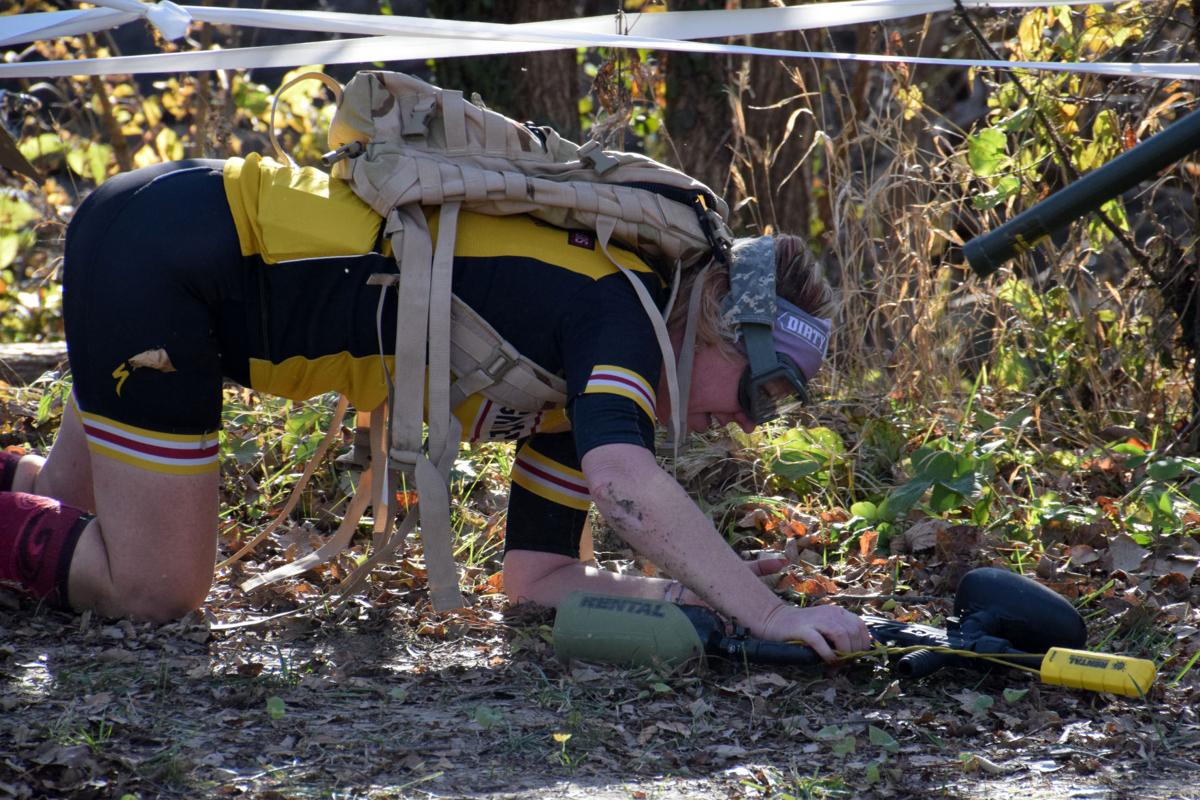 Lyn Bazil-Blubaugh crawls under an obstacle for the Readiness Test. 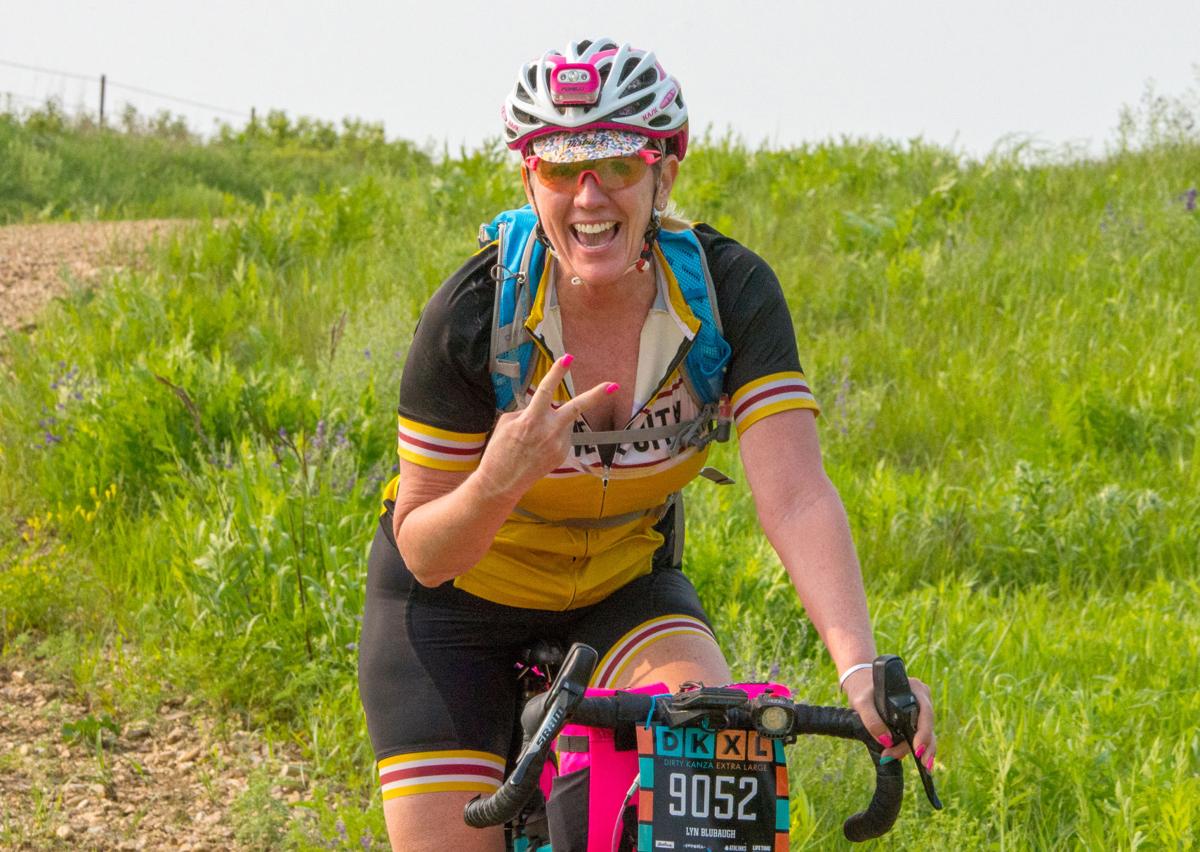 Lyn Bazil-Blubaugh from Madison finished nearly 320 miles in the 2019 DKXL, more than doubling her distance from the year before. 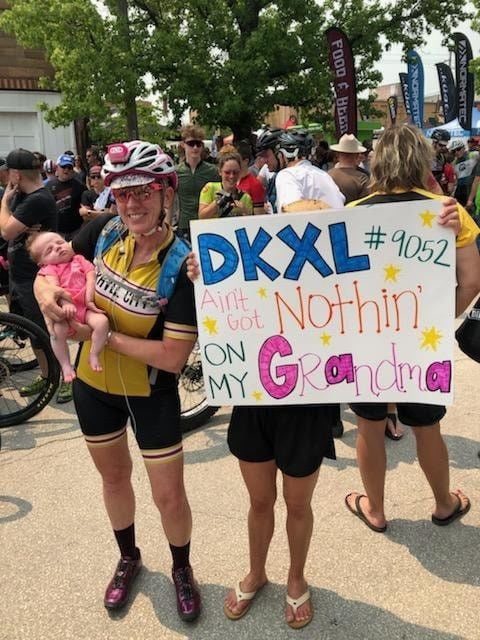 Lyn Blubaugh is a new grandma but she didn’t let that stop her from racing in the DKXL this year. 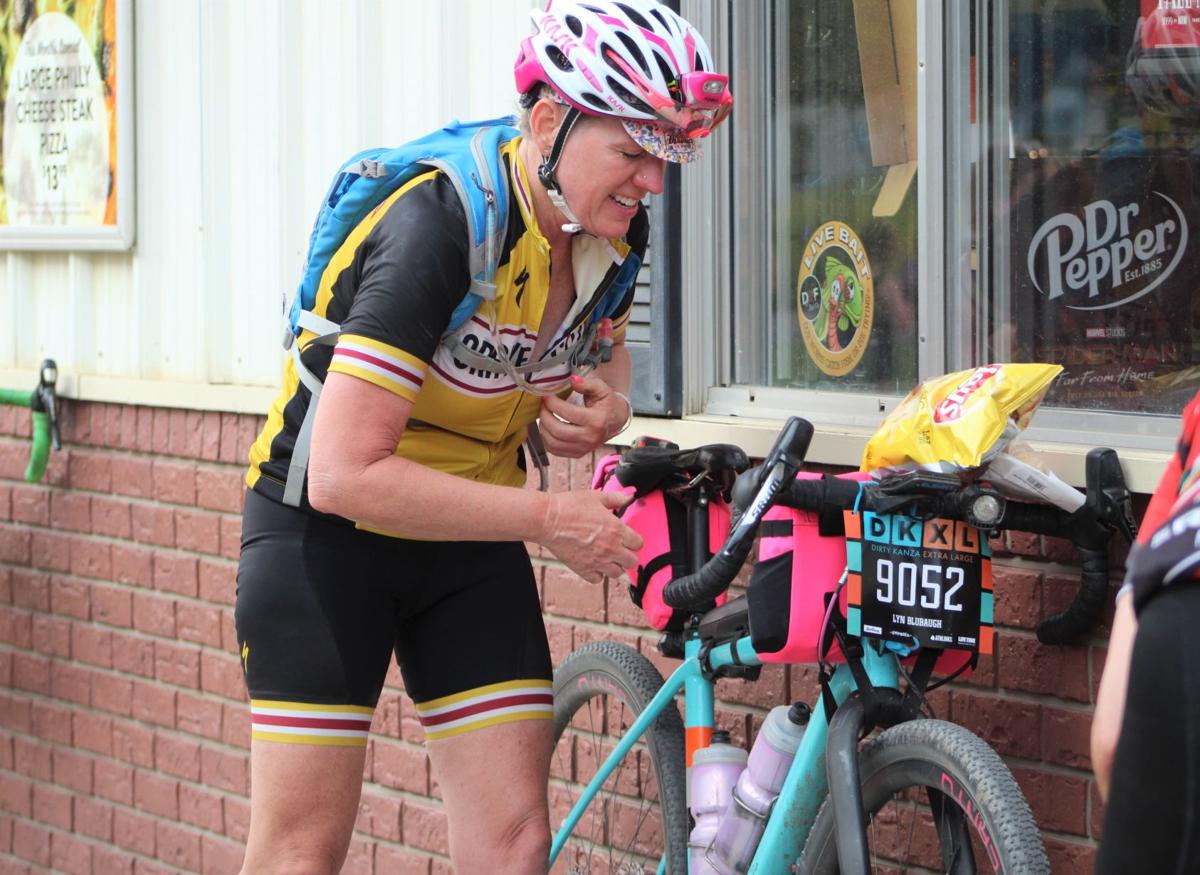 Lyn Blubaugh raced in the DKXL 350 mile gravel race over the weekend, using convenience stores along the way as her only source of food. Madison’s Casey’s was her first stop. 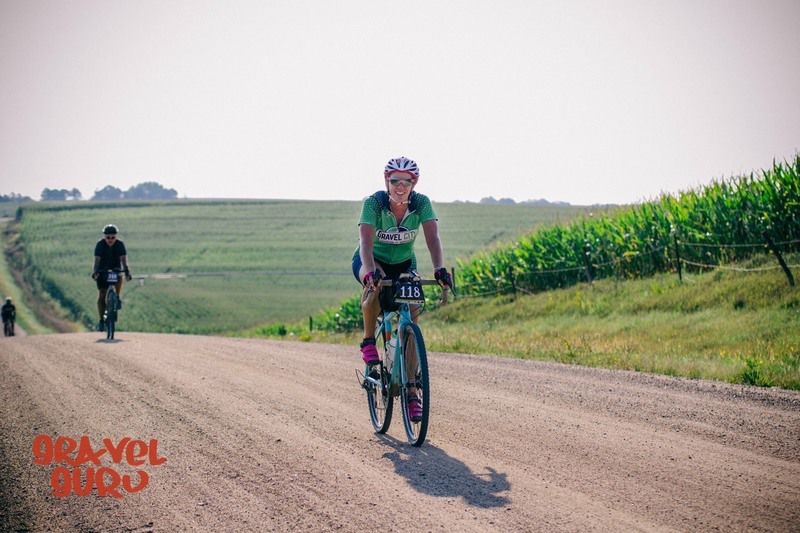 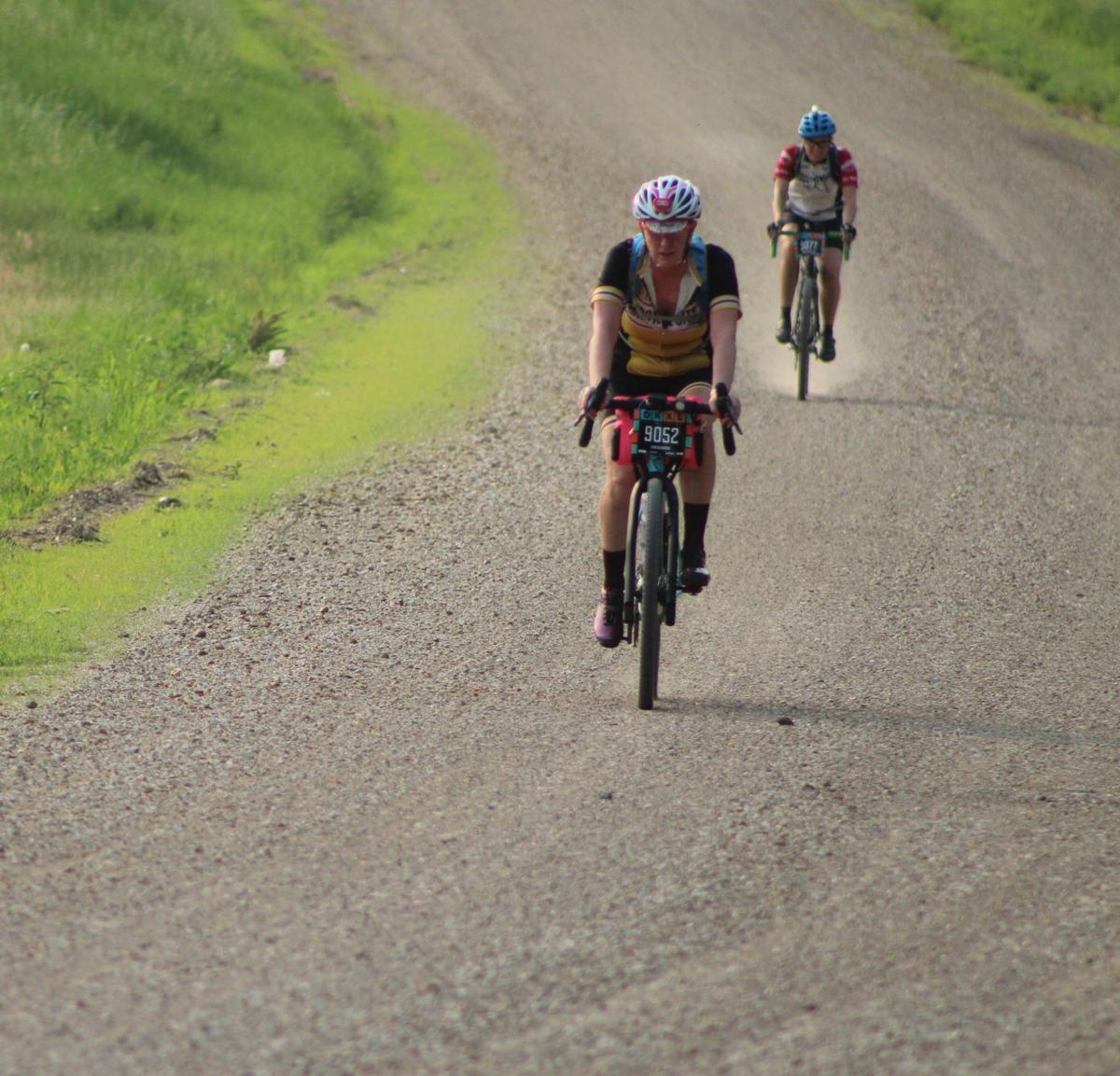 Blubaugh made good time as she came into Madison for the first stop on the DKXL350 Friday evening.

Lyn Bazil-Blubaugh receives a medal from Steve Harmon for having guts, along with her 5th Golden Spur. She was recognized for completing the long, three-part Spur challenge while undergoing chemotherapy for cancer. She was determined to get another spur at this year’s event.

Lyn Bazil-Blubaugh crawls under an obstacle for the Readiness Test.

Lyn Bazil-Blubaugh from Madison finished nearly 320 miles in the 2019 DKXL, more than doubling her distance from the year before.

Lyn Blubaugh is a new grandma but she didn’t let that stop her from racing in the DKXL this year.

Lyn Blubaugh raced in the DKXL 350 mile gravel race over the weekend, using convenience stores along the way as her only source of food. Madison’s Casey’s was her first stop.

Blubaugh made good time as she came into Madison for the first stop on the DKXL350 Friday evening.

Whether she’s grinding gravel across 350 miles of the Flint Hills or preparing for her next big race, Lyn Bazil-Blubaugh never shies away from a challenge.

So, it was no surprise when the local endurance athlete earned her Golden Spur during the 2019 Freedom Fest Spur Challenge Nov. 9. Blubaugh has competed in every Spur Challenge since it was introduced five years ago.

This year, she did it while undergoing chemotherapy.

Blubaugh, 52, was diagnosed with colon cancer on June 20 during a routine colonoscopy, just weeks after competing in the Dirty Kanza XL 350-mile gravel race for the second time.

While people can sometimes experience symptoms like fatigue, weight loss, abdominal discomfort and changes in bowel movements, Blubaugh said she did not experience any symptoms prior to her diagnosis. Any fatigue, she said, would have been attributed to her intensive training schedule ahead of the DK.

“I don’t have any cancer markers in my blood work still, to this day,” she said. “They would have never found it if I hadn’t had the colonoscopy.”

Blubaugh is receiving treatment through the University of Kansas Medical Center, where she is nearing the end of six months of chemo. The treatment schedule is intensive, with a two-hour IV session along with oral chemo for two weeks and seven days to recover. Just when she’s starting to feel “normal,” it’s time to start the process all over again. When she has completed chemo, Blubaugh said she will undergo surgery to remove a grape-sized mass from the rectal portion of her colon.

“Everyone has been affected with cancer somehow,” Blubaugh said. “I’m glad I don’t have any symptoms, because the chemo is rough enough.”

By all accounts, the Spur Challenge is a tough competition. The multi-sport race pushes competitors through an all-day endurance test including a 5K run and 40-mile gravel grinder cycling course that must be completed in 220 minutes. Finally, they take on the Spur Readiness Test — a modified version of the test that United States Army Cavalrymen take for the Order of the Spur.

Add on the mental and physical side effects of chemotherapy, and the Spur might just sound impossible. For Blubaugh, setting a goal to complete the challenge was a way to keep herself moving.

“I’m fueled by goals,” Blubaugh said. “When I found out I had cancer, my first goal was, I had been asked to help with the DK Women’s Camp in September. I made sure my oncologist knew and that my treatment wouldn’t interfere with that. My second goal was doing the Spur Challenge.”

Although her treatments leave her with just about a week of feeling well enough to ride, Blubaugh said she trained as she could for the gravel portion of the challenge.

For the 5K, she made sure to get some interval training and hill climbs into her runs to make sure she could complete a course in the allotted time.

“I did some hill work to make sure that I could get done in time, because you have to focus on if you can get the run done in 30 minutes,” Blubaugh said.

Pushing herself to train, even on her good days, wasn’t always easy. That’s why earning her Golden Spur this year has been such an emotional and rewarding experience.

Blubaugh said she has had a difficult time grappling with her diagnosis, and the toll it has taken on her life. With a weakened immune system due to chemo, she spends less time with friends to keep from getting sick. She isn’t as active as she wants to be — a harsh reality for an endurance athlete.

“It just takes you away from what you enjoy,” she said. “I don’t get to do what I like, which is ride my bike every day or run or go to the gym. I only get seven days, but man, I love those seven days. Sometimes on those days, I just need to spend time with my family and friends, so I don’t always work out. You just need to find the positive and the joy in those days.”

Blubaugh said, once her pathology comes back clear, her oncologist has said there is a 20 - 30 percent chance that her cancer will reoccur at some point in the future. She has started a plant-based diet and supplement regimen since her diagnosis, which has helped with her energy levels.

With her surgery date approaching, Blubaugh credits her husband of 24 years, Scott, along with their four adult children for helping her remain positive and focused on her recovery. In some ways, the diagnosis has helped build stronger bonds between them.

“My daughter comes down and takes me to most of my treatments,” she said. “We have a great relationship anyway, but this has brought us even closer. My friends here? I have the best girlfriends in the whole world. They clean my house, sit with me. I try to make sure that during treatment, I’m not alone for a long duration of time. When I first went through chemo, no one knew. I did a couple of days of that alone and it wasn’t healthy, so I make sure that I have someone there. It’s hard to ask for help when you’re the one that helps other people.”

Now, Blubaugh’s friends are there to make sure she has been eating and drinking, or has taken a nap. On the days she says she doesn’t need help, they show up anyway.

“My girlfriends have really stepped up,” she said. “I have a great support system. And my coach and his wife, they are great friends, too. I’m very blessed with the people in my circle.”

Blubaugh said she’s also blessed that her primary care provider, APRN Amy Seimears at the Simmons Medical Clinic, insisted she have a colonoscopy this year.

“She had wanted me to have it done last year and I pushed her off,” she said. “This year she said, ‘No, you’re going to get it done.’ So, she made the appointment and told me I had to go and we’re good friends and she told me she didn’t know why she felt so strongly about it, but it’s a good thing. She saved my life.”

Blubaugh said she cannot stress enough the importance of prevention or knowing about your family’s medical history. After her diagnosis, she learned there was a history of colon cancer in her family.

“If I had known that when I was 50, would I have had that done when I was 50 and maybe dodged what’s happening now?” she said. “I don’t know if it would have changed anything, but you have to ask those questions of your family members. They have so much genetic testing now and my kids are going to have some testing to see if they are going to have to be super aware. Just, do your preventative stuff. Your insurance company wants you to do it, anyway.”

When asked what’s next on her list after beating cancer, Blubaugh smiled.

"I'm very blessed with the people in my circle."