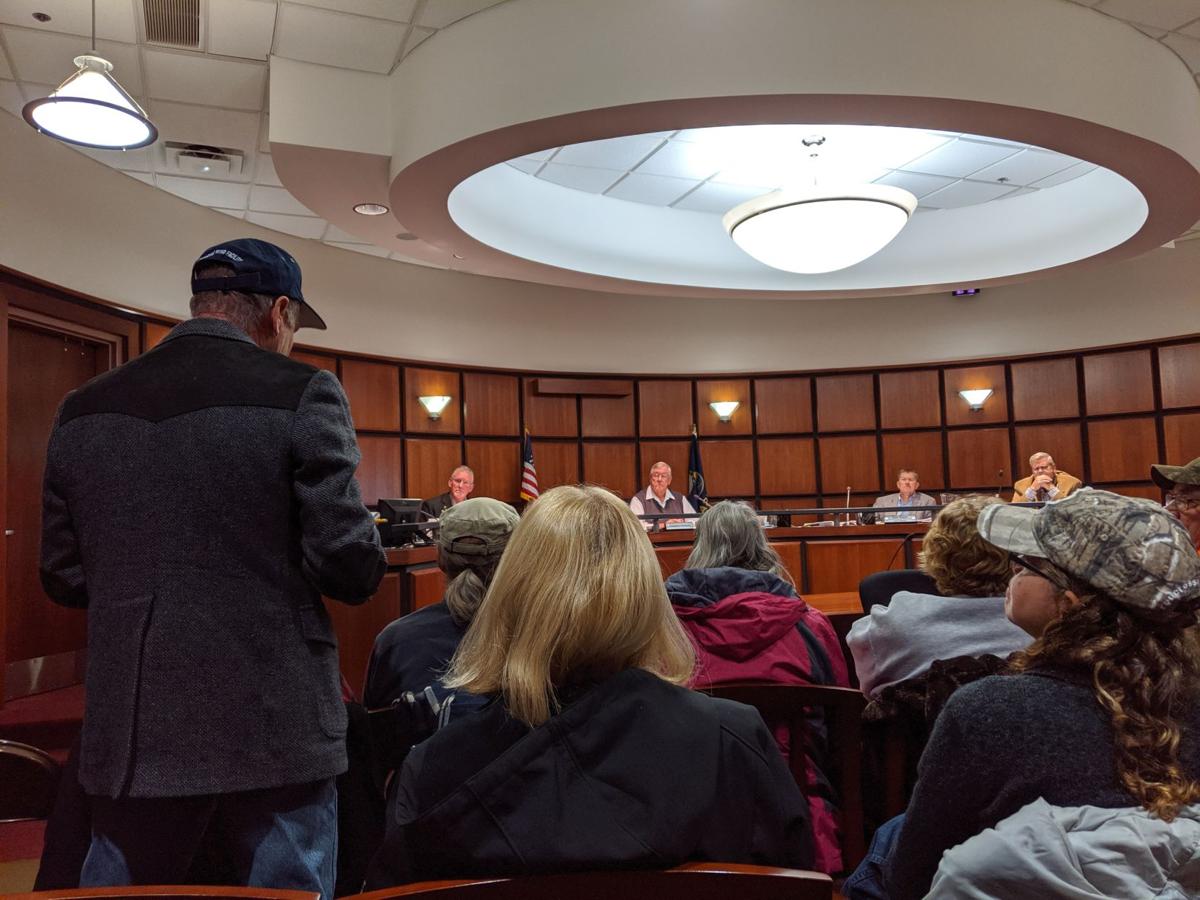 Landowner Lex Price speaks to the Lyon County Commission in favor of re-zoning land he currently owns so that it can be sold to BNSF Railway for development. 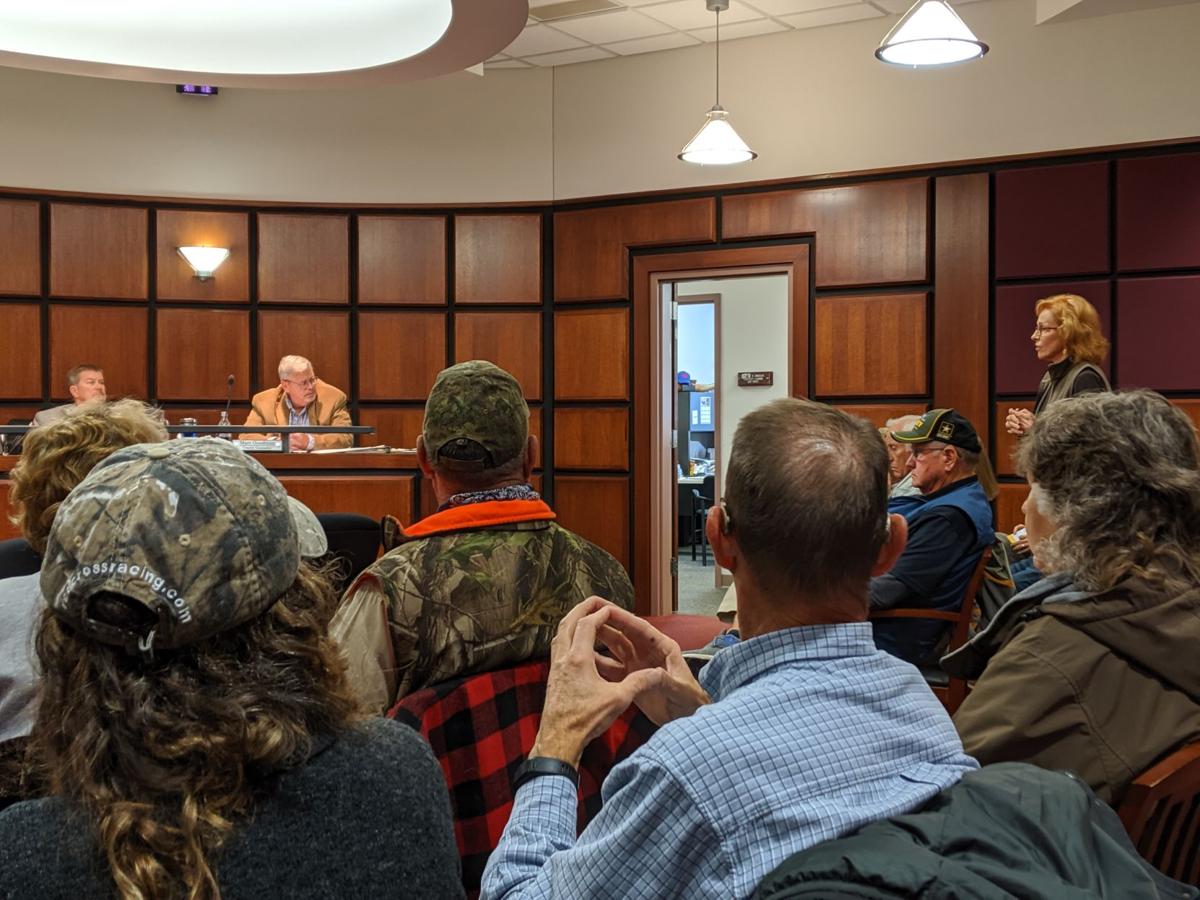 A standing-room-only crowd was on hand for the Lyon County Commission’s meeting Thursday morning.

Landowner Lex Price speaks to the Lyon County Commission in favor of re-zoning land he currently owns so that it can be sold to BNSF Railway for development.

A standing-room-only crowd was on hand for the Lyon County Commission’s meeting Thursday morning.

A proposed motion that would have re-zoned land in the 1500 block of Road 200 from agriculture to heavy industrial failed to pass Thursday during a meeting of the Lyon County Commission.

Property owners Lex and Janice Price requested the change in order to allow for BNSF Railway to market the more than 300-acre tract, allowing prospective industries to make use of the land and its close proximity to approximately 7,000 feet of track and existing power connections. The issue was originally brought before commissioners in August, and has since been the topic of much debate from zoning officials, business development groups and residents near the proposed site. Thursday’s public comment period reflected the high amount of community interest, as individuals on both sides of the issue voiced their support and concern in front of a standing-room-only crowd.

Proponents of the re-zoning spoke of added value to the area, most believing the change would account for significant economic and population growth in addition to future jobs. Others encouraged decisive action, warning the area may not see any further opportunities if it failed to approve the switch as soon as possible.

“We need sites,” said Regional Development Association of East Central Kansas President Kent Heermann. “If we don’t have sites to promote and attract new projects here, then we won’t have any new projects. Anymore, the competition is pretty tight. We gotta have sites that are zoned and ready to be developed. That’s the world we live in … We’re a rural area. Our best growth comes from keeping what we have, growing what we have, and then every once in a while, we’ll get a new project. ”

“Once, I thought the [Reading] Wind Farm wasn’t a good idea, and now it might provide a good job for my grandson,” Lex Price said. “If Lyon County approves this, maybe he’ll have another chance if the wind farm doesn’t come through. I need to think of my grandson, and there’s a lot of people here in this county that need to think about jobs for their kids, too.”

“I just want to make sure that everyone understands that we are involved here because — almost 10 years ago — the Regional Development Association approached us and said, ‘Hey, we’d like to do something. We’ve got this site, we’d like to do this,’” added BNSF Railway Director of State Government Affairs Jeff Davis. “That’s why we’re here. There is no customer. I don’t know when there will be a customer or someone who is going to locate here. But one thing I do know is that if you don’t re-zone the property, there will never be a customer and there will never be an opportunity for economic growth. We just approved another half-a-dozen sites this week where it would be easier for people to go because they don’t have to endure what basically amounts to a trial.”

Those against the re-zoning process cited many of the same concerns, including lack of information regarding the change, traffic, noise, damage to roads, loss of property value and various agricultural issues. Some doubted just how many viable jobs new industries would add, thinking the majority would most likely be automated.

“I don’t feel like it’s fair at this point, with this level of information, to expect us to just go with the flow,” area resident Nickie Edwards said. “I’m not opposed to anybody making a profit, but I don’t think it’s fair to the rest of us because we have no control over what goes in.”

“The people for it don’t live anywhere near it,” resident Angela Houser added. “The people that live near it are going to have to deal with traffic and everything else. I’m retired from Hostess and I’ve been in the plants since they’ve remodeled, so I can tell you there are now tons of robots in there. So, are these new jobs going to be for humans, or are they going to be for robots?”

Due to a wrinkle in state law regarding formal petitions against proposed county government projects, the vote on the issue — which was opposed by a petition with hundreds of signatures — required a three-fourths “supermajority” in order to pass. Due to there only being three current positions on the Lyon County Commission, the decision needed to be unanimous.

After visitors had a chance to voice their opinions, commissioners offered some of their own, resulting in the motion failing 2-1. Commissioners Dan Slater and Rollie Martin voted in favor of the re-zoning while Scott Briggs stood as the dissenting voice.

“I’ve spent a lot of time out there,” Briggs said. “Before the zoning came up, I’ve been in that pasture many times. When I get a little time, I go down and I drive Road 200 and I drive Road S. I drive through the community, and I look over and I see the Westar Plant. I think [the change] opens it up to too many things that might affect the property and affect the community negatively until we know what it’s going to be.

“Almost five years ago to the day, we had the same conversation. I went back and I looked why I voted the way I did the time before. Quite honestly, nothing has changed. Do I think that the RDA and the Price family should continue to try to market this piece of land and bring us a project? Yes, I do. I think it’s something that could benefit the community altogether. But until I know what it’s going to be, I struggle with it.”

Why isn't the RDA filling the many open locations already in Emporia? And, as always, if a business comes in, they will do it because wages are low here and they want to jump on the bandwagon.

If folks are as progressive as they want people to think they are, then their nest just got pooped in. I hate to see 300 acres destroyed by covering it with concrete. A prime example is the hollowed bio-diesel plant white elephant.

I can't believe Briggs is against the development of that property, but he's all for the windmills that mar up the whole countryside. What a shame.

Emporia has a Westar Power plant? I thought power came from Wolf Creek... what kind of price savings did Emporians see on electricity bills? I remember electricity being pretty cheap there already. I'm paying a little over $0.16/kWh which isn't so great, but the perks for sure outweigh the costs. I'll definitley go have a look at this power plant next time Im around.

Westar plant opened in 2008 as a peak demand substation

A great victory for the property rights of rural America.